How Self-Identified “Liberals” Get Radicalized to the Far Right 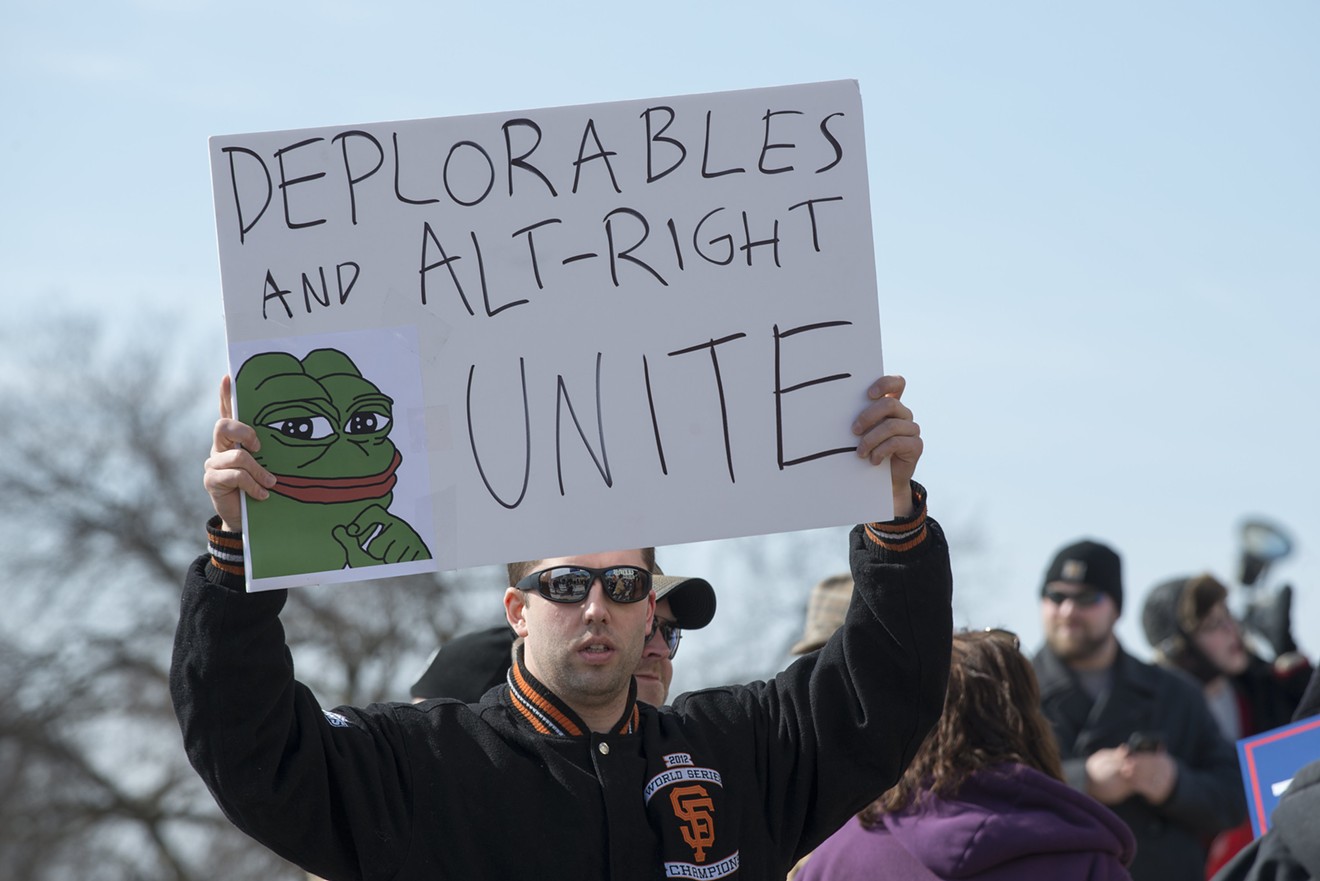 If you make content for the alt right, you have functionally joined with them Photo by Fibonacci Blue via Flickr
I’ve spent the last couple of weeks reporting on both ivermectin as a COVID cure and the newest wave of dangerous anti-vaccination nonsense (spoiler: the two are deeply related). Since then, my email has been a non-stop neurotic cabaret of screwballs, but a lot of the anger comes from the fact that I dared to call podcaster and “professor in exile” Bret Weinstein, a key figure in both promoting ivermectin and debunked ideas about the dangers of widespread vaccination, a far right grifter. Weinstein often identifies himself as left leaning or a lifelong Democrat, much as Canadian professor, author, and YouTube personality likes to call himself a “classical British liberal.” How can such men be right wing if they reject the label?

It’s a question worth exploring, and it involves a long, deep dive into what even counts as the American right wing anymore. Let’s dig through the entrails of Weinstein and see if we can’t find an answer.

The political right wing is supposedly a collection of various positions such as a weak federal government, low taxes, deregulation of private enterprise, and a large police state and armed forces, and personal freedom. On top of these are a host of moral or social issues generally perceived as right wing even when they directly contradict the previous list. These include interference with or restrictions of the rights of marginalized people, strict limits on reproductive choice, silencing political opinions that speak out against state force or white supremacy, and voting impediments.

However, I would argue that since around 2010, the right wing in practice is none of these things save perhaps low taxes meant to preserve the wealthiest class of Americans at the expense of everyone else. Especially since the election of former president Donald Trump, the one consistent right-wing position is “whatever owns the libs.” One side of the political spectrum, especially at the regular citizen level, has firmly committed itself to eternal opposition for opposition’s sake. What is the right? It’s whatever the left is not no matter how ridiculous it may be. Even the protection of the upper class has a vaguely trollish feel to it these days. It’s not just that those people are rich, it’s that you, socialist with a weird haircut who thinks people should be able to doctor for free, are poor and miserable.

Which brings us to someone like Weinstein, who has long since abandoned his academic past to become a professional troll. His new life started when he resigned from Evergreen State College following a dustup on campus. The whole story is long and muddy, and no one comes out of it looking good. The tl:dr is that Weinstein called a program that asked white students to stay off campus for a day to learn about racial issues an act of oppression, and when protests and threats followed he doubled down. Weinstein sued the college for failing to protect him, and a settlement was eventually reached where he resigned.

Whoever was in the right at Evergreen (if anyone), the post-collegiate work of Weinstein is a perfect example of how a “liberal” can still become radicalized to the right. His story is actually very common.

Many people called Weinstein racist for his actions at the college. He undoubtable got threats and having been the subject of multiple organized online harassment campaigns I can attest that is something very traumatizing. Unfortunately, it’s also a kind of alt-right gateway drug because it leaves you emotionally vulnerable.

YouTuber Laci Green was famous for her sex education videos with a feminist bent, but at one point she used some language that resulted in a pretty vicious dragging on Twitter from trans people. Since then, she’s morphed into a member of the “red pill” crowd, a loose confederation of misogynists and transphobes (read: "gender critical") that serve as the respectable face of gender-based fascism.

Or consider conservative political commentator Candace Owens. At one point, she ran a mostly liberal blog site, and said she wanted to start a website where people could name and shame harassers. This was during GamerGate, and prominent harassment targets like Zoe Quinn and Randi Lee Harper reached out to Owens to tell her how badly a system like that could be gamed by trolls. Owens interpreted the advice as a vicious harassment from the left, and she’s been the far right’s best Black friend ever since.

That happens because when the left pushes back against errors in judgment or morality, a lot of people flee in the opposite direction where the far right waits with open arms and love bombs. That’s what happened with Harry Potter author J.K. Rowling. As people began to call out her transphobia on Twitter, she was championed and comforted by the far right. The spiral continued, leaving her to detach even from the child actors she had watched grow up in order to hang with her new, far right friends. If it sounds like cult recruitment, that’s because it is.

This is sort of the position that Weinstein finds himself in. His actions at Evergreen are seen as a solid blow against college campus political correctness and it makes him a martyr for the “white people are actually the most oppressed” crowd. Figures like FOX pundit Tucker Carlson and talk show host Dave Rubin praise him, and the king of all alt-right apologia, Joe Rogan, has him on as a guest.

Consequently, Weinstein begins to respond to this increasingly right-wing audience. He says he wrote in Senator Bernie Sanders (I-Vermont) for president in 2016, yet opposes signature positions like universal healthcare and free college unless America has a “massive surplus,” essentially negating the idea of such services as a right or entitlement for all people. He claims to support equality for Black people, but never fails to paint Black Lives Matter as an insidious Communist organization that is trying to force climate change justice down our throats.

All of these sorts of positions give him the plausible deniability of being “liberal” while still annoying the left and winning the admiration of the right for supposed hard truths. The trollish nature of Weinstein’s output is best shown by his call for a “unity” ticket for president made up of Rep. Dan Crenshaw (R-Houston) and former Rep. Tulsi Gabbard (D-Hawaii). His idea of someone the left would appreciate is a woman who goes on FOX News to scream about cancel culture, which she compares to Islamic extremism.

Coming to that conclusion requires a potent combination of obliviousness, bad faith argument, and self-deception. This is probably not helped by the fact that Bret Weinstein often doesn’t know what he’s bloody talking about anyway. A former colleague of his at Evergreen, Prof. Nancy Koppelman, laid out a rather blistering condemnation of Weinstein’s time as a teacher that makes his seduction to the right much more understandable. She taught with him twice, and noted his lack of interest in any work he was not personally invested in. This included texts Koppelman was teaching with, to the point he flat out faked reading them. That attitude extended to his students’ assignments.

“Weinstein lacks a commitment to students’ work,” she wrote. “He flat out refused to read their writing because what he really cared about was students’ engagement with him. ‘That’s not the best use of my time,” he once told me.”

Koppelman’s essay paints the picture of a man who is charismatic and intelligent, but who cares more about his own ego rather than seeking for the truth. She says she rarely heard him concede a point another had made, and his refusal to listen to criticism over the incident that led to his resignation is partially why the whole thing escalated in the first place.

Even the ivermectin and anti-vaccination promotion ties into that. Weinstein might say he’s pro-vaccine, but he’s happy to build interest in an anti-authority, anti-intellectualism movement because that is what his right-wing audience likes. Truth is less important than asserting one’s entitlement to disagree, even when the disagreement is fatally dangerous.

Weinstein, Owens, Rowling, Green… these are people who really love to hear themselves speak. No judgment there, so do I. However, they are more marked by their inability to listen at the expense of their own spotlight. As voices raise to try and reach them, they retreat into the ranks of conservatives who will happily defend their right to be wrong to the death.

Because the right no longer has any creed but “make the left mad” and is comfortable with hypocrisy, the self-image of people like Weinstein as a progressive or liberal is easy to maintain. He can vote for Biden as he says he did, and still be firmly part of the right-wing machine. The content he creates now is right wing content, and if that’s not who he is in his heart then the effect on the world is still exactly the same.

In the end, Weinstein is radicalized by his audience. They are eager to swallow a self-identified progressive and regurgitate him as a shield for their own views. Is Weinstein a liberal as he says? I can’t know and don’t care. What I can measure is his worth to the right wing army of habitual malcontents and bullshit artists, which is very, very high. Someone that useful to the alt-right is not a progressive. They just aren’t.
KEEP THE HOUSTON PRESS FREE... Since we started the Houston Press, it has been defined as the free, independent voice of Houston, and we'd like to keep it that way. With local media under siege, it's more important than ever for us to rally support behind funding our local journalism. You can help by participating in our "I Support" program, allowing us to keep offering readers access to our incisive coverage of local news, food and culture with no paywalls.
Make a one-time donation today for as little as $1.