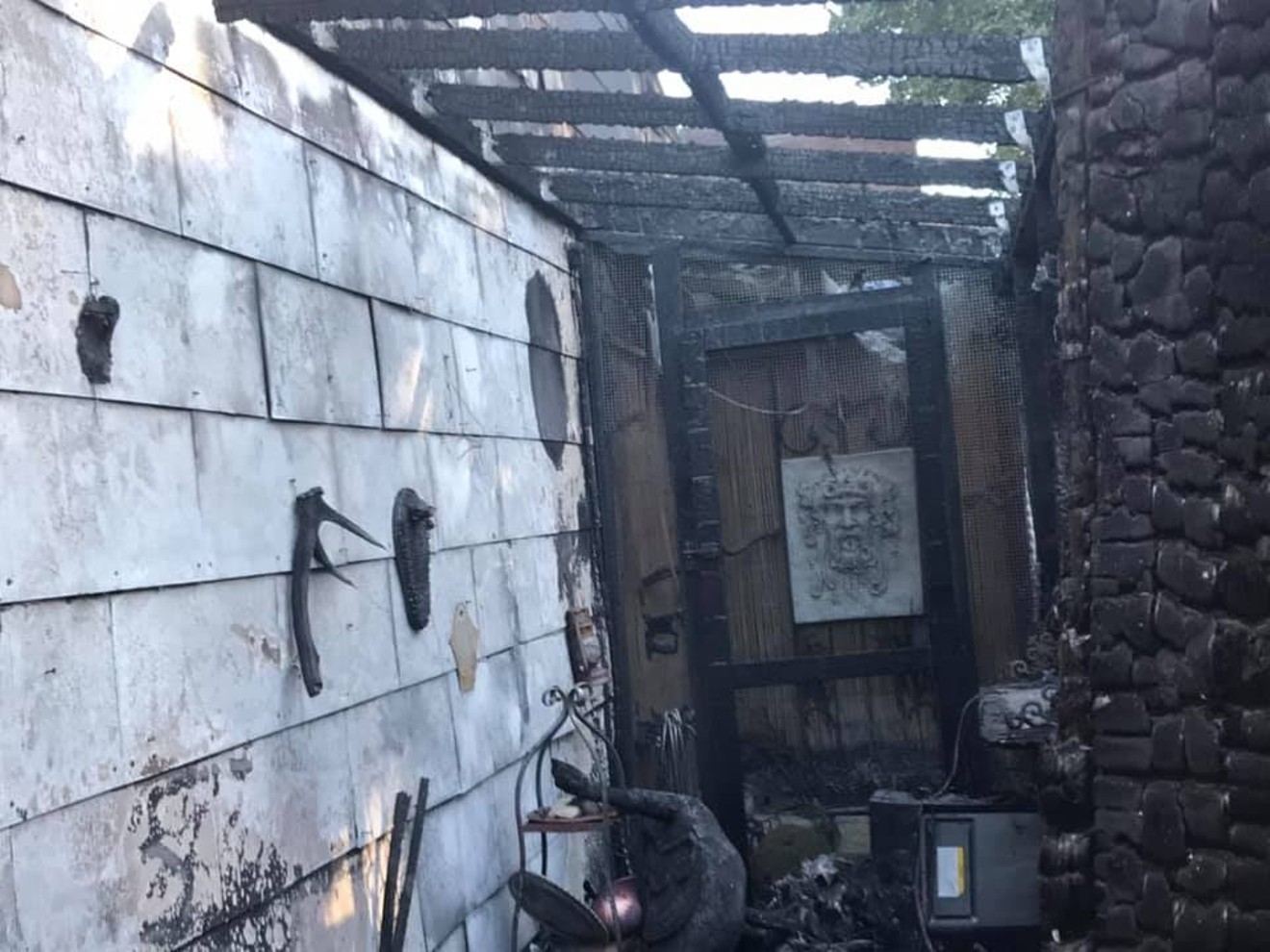 The outside hallway to the peacock enclosure through which people escaped the fire. Photo by Jef Rouner
On Friday, November 1, a man walked into Houston's famous morbid curiosity shop, The Wilde Collection on Yale, and set it on fire with gasoline. Police later arrested local artist Jonathan Jindra, best known as part of the performance art duo Cyclea with Y E Torres. Since that arrest, friends and colleagues have described a man who had become erratic after a failed relationship.

Prior to the fire, Jindra’s now-temporarily suspended Twitter account was a bizarre litany of religious and violent rants. He referred to himself as “demon hunter Jindra” and claimed that he wanted to kill more people than Hitler. There were homophobic ramblings, references to Wilde Collection co-owner Lawyer Douglas by name, and one tweet saying “The Wilde Collection is dead. By my own hand and wrath I say this.”

Cressandra Thibodeaux of 14 Pews, where Jindra rented space for his Binarium Sound experimental music series, says that Jindra had experienced a marked decline in temperament over the last year following his break-up with a female employee of the Wilde Collection

“It went downhill when his girlfriend broke up with him,” says Thibodeaux. “He just seemed to get dark. He never seemed violent… just troubled. Like he couldn’t sleep or focus. He was burning the candle at both ends, working 18 hours a day and raising a kid. ”

Another fellow artist that knows Jindra is noiz producer Spike the Percussionist. He too noticed a marked dropped in Jindra’s demeanor at shows. 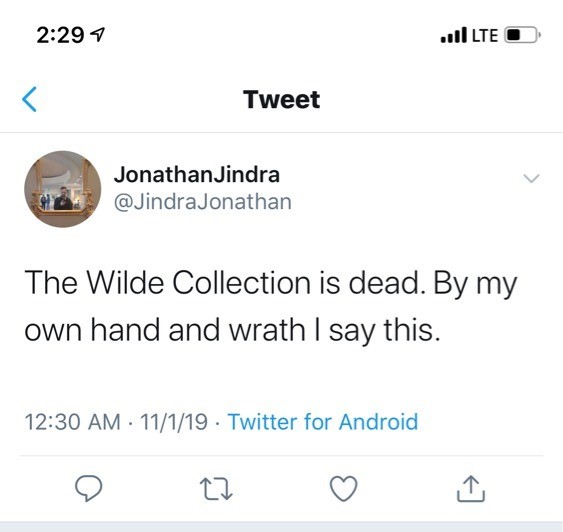 “After a couple of years he dropped off the radar,” says Spike. “I noticed he wasn’t generating or being involved with the scene much anymore and initially I thought he just moved on to a different creative avenue as some people can. I ran into him at a show at Notsuoh in September. Tried speaking with him and he was really vague with all of his responses which seemed very odd. It was as if he had lost any interest in being creative or having a creative outlet. After the incident and seeing all of our fellow musicians and mutual friends post on Facebook about his change in behavior over the past few years things seemed to make more sense. I wasn’t aware of the Twitter [comments]. I think in this day and age that sometimes the ‘If you see something, say something’ rule could/should possibly come into play. Just looking at a few of those Twitter posts really should have set off a lot of alarms.”

There also seems to be a religious component to Jindra's actions. Douglas is well known for his occult wares at the curiosity shop and reportedly is descended from curanderas and voodoo witch doctors. Jindra frequently referred to demons on Twitter. Thibodeaux says that Jindra’s religious fervor had grown substantially over the last year.

Currently, Jindra remains in jail on a $50,000 bond according to Harris County Sheriff’s Office online records, and is due in court Monday. Douglas and co-owner Tyler Zottarelle remained concerned that he will be released.

“There were ten or 12 people in the store,” says Douglas. “I’ve talked to some of them. When he did it, he looked directly into people’s eyes and did it anyway. " 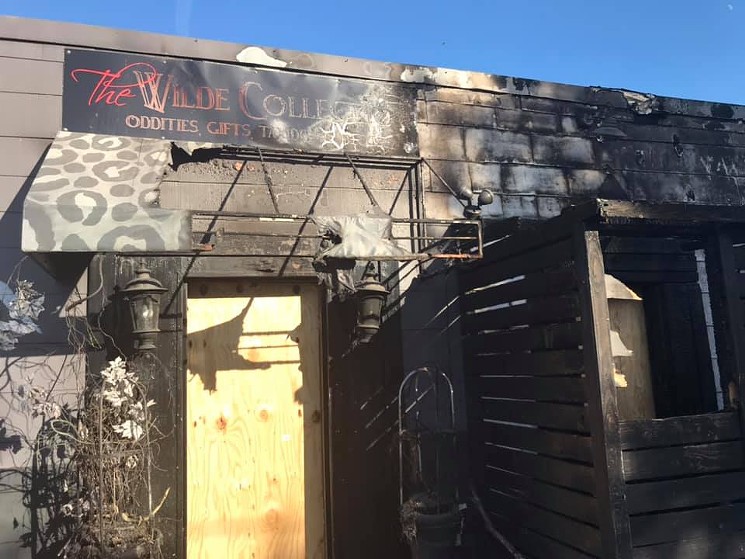 The burnt exterior of Wilde Collection.
Photo by Jef Rouner
If convicted, Jindra faces up to 20 years in jail. It’s possible that he will be charged for personal injury as well, as one employee was burned after tackling and holding Jindra until the police arrived.

For his part, Douglas is baffled by the attack. He says after his employee ended the relationship, Jindra contacted Douglas about wanting to be friends. Douglas responded affirmatively, but says that otherwise he hadn’t seen Jindra in the store since January. When Jindra’s name and face were identified on social media after the arson, Douglas didn’t even recognize him.

“The last time I really remember seeing him was when I invited him to the Thanksgiving dinner we hold for employees and their significant others. He sat across from me. We had a pleasant time. I don’t understand.”

The fire has done significant damage to The Wilde Collection. Douglas says that the building is probably a total loss and will have to be rebuilt from the ground up. Though no people were killed in the blaze, several live animals on site such as Douglas’ cat Nevermore and snake Nidhogg died. Most of the birds in the store survived, and employees and patrons were able to exit through their enclosure to safety after Jindra started his fire in the store’s entrance.

Douglas is currently homeless, having lived in the off-limits parts of the store. He had to fly back suddenly from Salem, Massachusetts where he was vacationing when the arson occurred. Since then he started a GoFundMe page that has had remarkable community support. The campaign raised more than double the initial $20,000 goal within in 48 hours as customers and friends rushed to help get the store back on its feet as soon as possible. Still, it will likely be a long time before Wilde Collection is once again open.

“I’m devastated,” says Douglas. “Things feel like they’re going to get worse before they get better. We have to come back again. We’re not going to let this act of terrorism stop us. The community really cares about what we’re doing. We’re not going to let him burn our spirit.”
KEEP THE HOUSTON PRESS FREE... Since we started the Houston Press, it has been defined as the free, independent voice of Houston, and we'd like to keep it that way. With local media under siege, it's more important than ever for us to rally support behind funding our local journalism. You can help by participating in our "I Support" program, allowing us to keep offering readers access to our incisive coverage of local news, food and culture with no paywalls.
Make a one-time donation today for as little as $1.