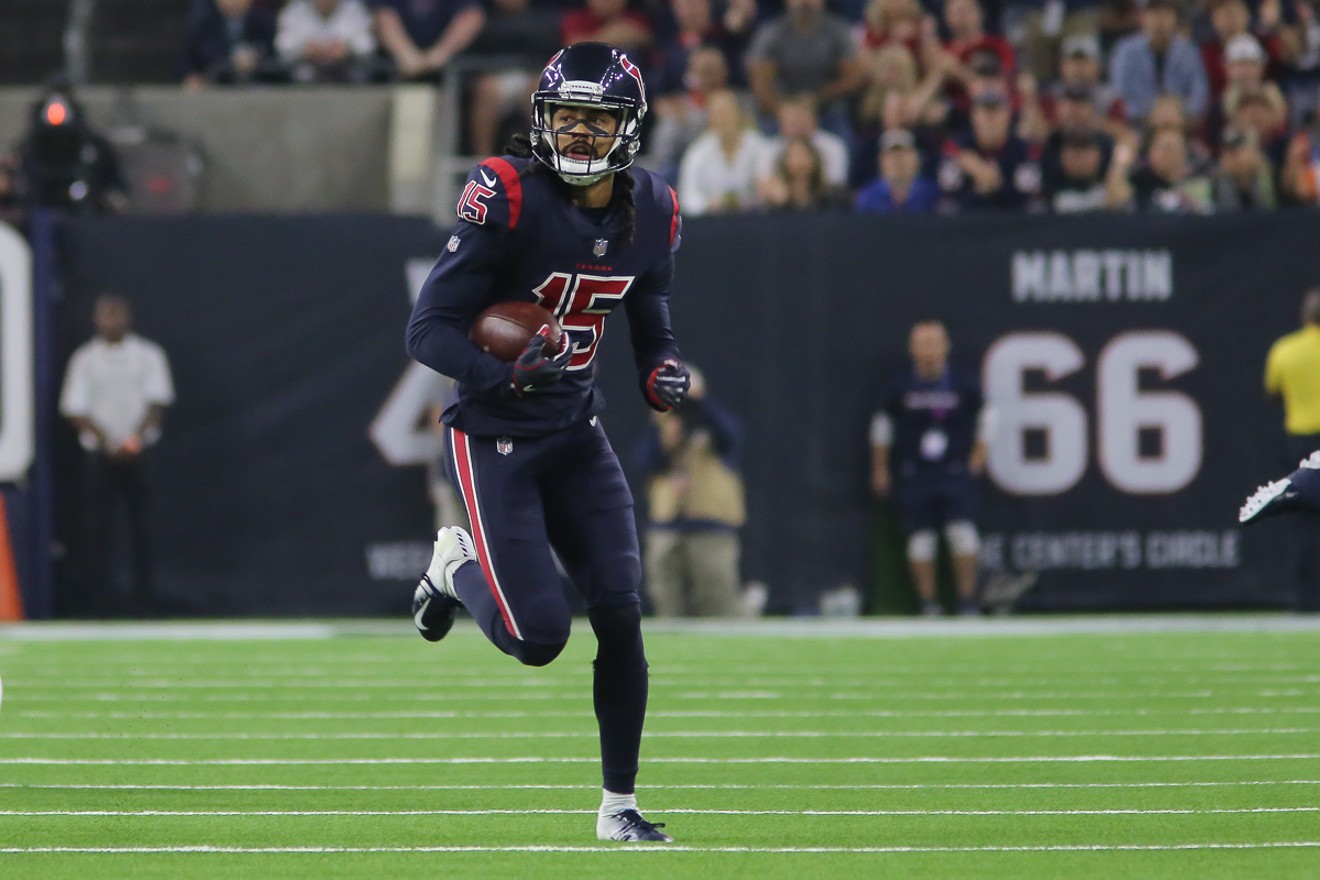 Will Fuller's annual soft tissue injury is here, and it;'s become a very depressing tradition. Photo by Eric Sauseda
It pains me to say this, because Will Fuller seems like a great dude, and when he is healthy, he is one helluva football player, but was anybody surprised when Fuller was shown in the first quarter of the loss to the Colts on Sunday making that long, slow walk back to the Texans' locker room? It's become an annual tradition, like the Astros making the postseason or the release of that year's next Star Wars movie — Will Fuller WILL get injured. Soft tissue, blunt force, acts of god, they've all happened and continue to happen to the Texans' star crossed fourth year wide receiver.

On Sunday, it was a hamstring injury, and on Monday the NFL Network's Ian Rapoport broke the news to us:

So, essentially, it's "Here we go again!" There's a website called the "Sports Injury Predictor" that gives the injury history of various professional athletes, and tries to forecast the likelihood of an injury in the current season. They gave it a 55.4 percent chance that Fuller would suffer an injury in 2019. That felt low before the season, and obviously feels foolish now, especially when you consider the totality of Fuller's bumps, bruises, sprains, and breaks:

Oct 25, 2018  - Knee ACL Tear Grade 3
Fuller tore his right ACL in the 4th quarter of a Thursday night game against the Dolphins and missed the rest of the season. He had surgery in the last week of October.

Aug 15, 2018 - Thigh Hamstring Strain Grade 2
Fuller "tweaked" a hamstring in an August practice. He sat out the whole preseason (coming off January knee surgery) and missed the regular-season opener.

Aug 2, 2017 - Shoulder Clavicle Fracture
Fuller missed the entire preseason and 1st 3 games of the regular season with a broken collarbone.

Oct 30, 2016 - Knee Strain Grade 1
Fuller left Week 8 with an unspecified left knee injury that cost him the game after the Week 9 bye.

Sep 7, 2016 - Thigh Hamstring Sprain/Pull Unspecified Grade 1
Fuller popped up on the injury report leading up to Week 1 but played through his hamstring issue.


Fuller is one of the rare NFL players to hit the injury trifecta before his rookie deal is even done — a broken bone (clavicle in 2017), a torn ligament (ACL in 2018), and a soft tissue pull (various, every season, now including 2019). Let's unpack the ramifications from the latest Fuller injury news, shall we?

Thank God for Kenny Stills!
His staunch critics (I'm more of a moderate critic) may not want to admit this, but William O'Brien (the moniker Seth Payne and I have given to Bill O'Brien's GM persona) has made some impactful moves that have worked out pretty well. I mean, we will see what it's like to have no pick in the 2019 draft, but for NOW, the acquisitions he's made have been solid, including Stills, who felt like a throw-in in the Laremy Tunsil trade, but has been the Texans' second most consistent receiving threat when he's been healthy. (He missed the Atlanta and Kansas City games with a hamstring injury of his own.) Now, with Fuller out, he will really be the only guy on the roster who can stretch a defense vertically. Yes, all of a sudden, Stills is one of the more important x-factors on the roster.

These damn hammies!
I'll just reiterate here what I said in my recap of the loss to the Colts yesterday:

4. Hamstrings
Well, it's now reached a point where unfortunately Will Fuller leaving the field in the first quarter of a game with some kind of injury has become an annual tradition. Yesterday, it was a hamstring injury, which means that Bradley Roby (didn't travel with the team), Kenny Stills (returned yesterday after missing two games), Johnathan Joseph (back after one game missed), and Fuller have all suffered hamstring injuries in the last few weeks. I know the Texans have made several improvements to their training and medical processes, but they need to bring in someone who specializes on hamstring maintenance. Whatever they're doing isn't working. (I'm being tongue in cheek... sort of.)


Will Fuller fantasy owners are ready to eject.
Coming into the season, when Fuller had been healthy and Deshaun Watson was at quarterback, Fuller was putting up elite level receiving stats, including 11 touchdowns in 11 games. So come fantasy draft time back in August and early September, many fantasy owners out there drafted Fuller in that "sleeper with upside" part of their draft, hoping against hope that this would be the season he stayed fully healthy. Man, how foolish do we all of you feel? Even before the injury, Fuller had been wildly inconsistent this season:

Basically, if you didn't start Fuller against Atlanta (and I didn't), he's been a big nothing for you in fantasy. At least a hamstring injury provides some sort of clarity. I KNOW not to start him now.

Fuller's contractual future is one of the more crucial "O'Brien GM" decisions.
Now comes the big picture question — what do four straight seasons significantly truncated by injury do to Fuller's long term status with the Texans? He has the rest of this season and next season (5th year option on his rookie contract) under contract. Next season doesn't become fully guaranteed until early March, as we learned with Kevin Johnson this past offseason, who the Texans exercised the 5th year option on in May 2018, and then cut him after the 2018 season when he suffered a season ending concussion. Unlike Johnson, Fuller has actually been a solid player, if not tantalizingly spectacular at times, when he's been on the field, so my guess is his fifth year option isn't in jeopardy. O'Brien appears to be a big fan of Will Fuller, or at least the parts that don't sprain or break when a stiff breeze rustles past him. One thing is for sure — unless it is largely playing time based, you absolutely cannot do a long term extension with Fuller this offseason, not with Whitney Mercilus, D.J. Reader, Laremy Tunsil, and possibly Deshaun Watson on the extension list.