Houston By the Neighborhood: Broadacres in the Rice/Museum District 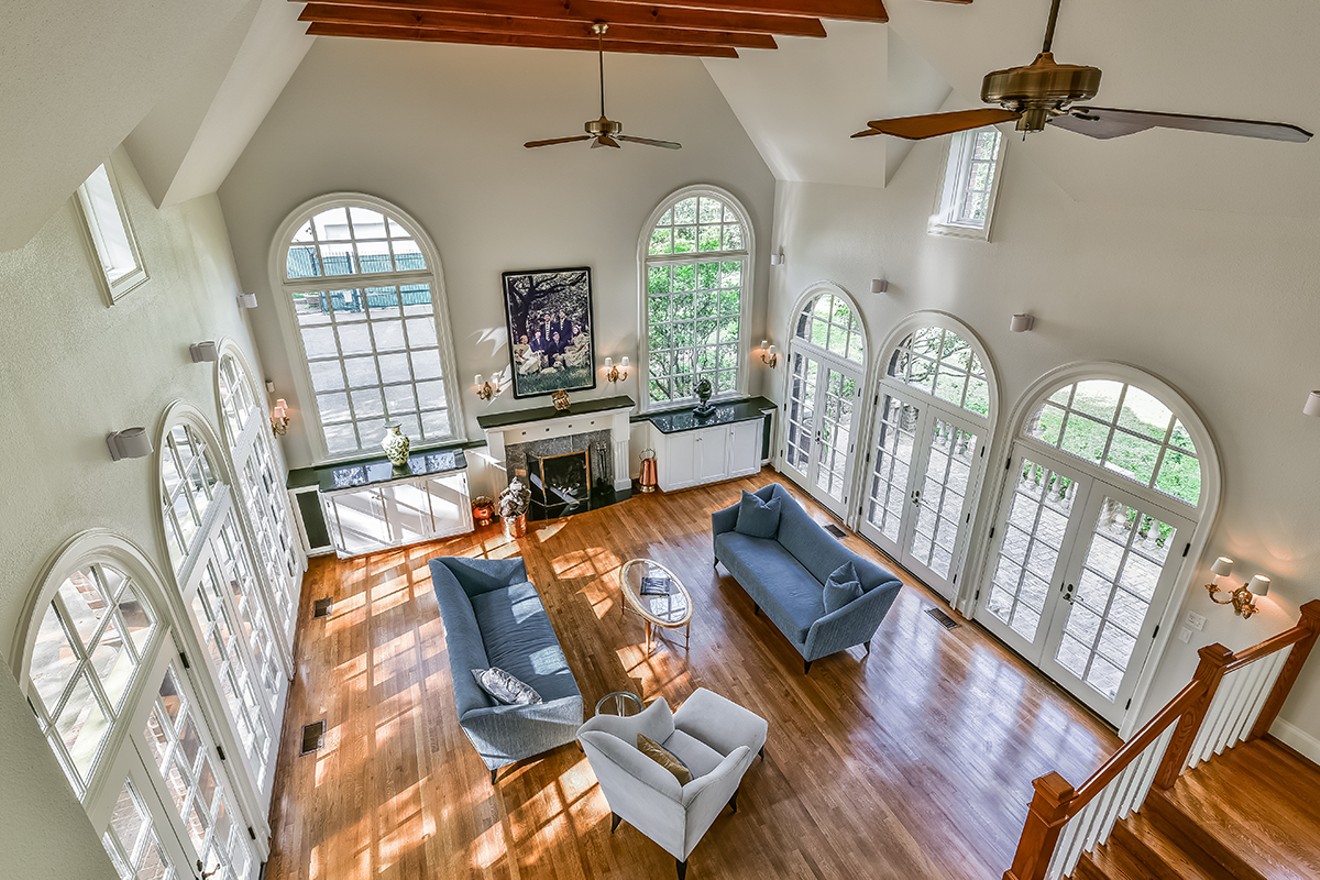 Only 26 homes were built in on North, South and West Boulevards in the Broadacres neighborhood. Photo by Prohouse Photos
The notable families who live in Houston's historic Broadacres subdivision are there to stay; don't expect much turnover among these stately mansions along the tree-lined boulevards near Rice University.

The area is certainly wrapped in history; it is one of only 11 Houston neighborhoods designated on the National Register of Historic Districts. Its origins are colorful, too. Captain James A. Baker (1857-1941), a Houston attorney, had as one of his clients the millionaire William Marsh Rice. Long story short, Rice died unexpectedly in New York and Baker sussed out a plot to murder Rice and abscond with his wealth. Working with local officials, Baker was able to preserve the estate (more than 100 interested persons had staked their claims) and directed those funds to establish what is today known as Rice University.

Twenty years later Captain Baker and his son, James A. Baker Jr. (papa to Baker III who served as U.S. Secretary of State and White House chief of staff for President George H.W. Bush), developed the Broadacres neighborhood with just 26 lots on a 34 acre tract of land. They selected William Ward Watkin to design the breathtaking oak allées and landscaping along the boulevards; Watkin had been the supervising architect of the Rice campus. Traditional, English and Spanish mansions soon went up, designed by leading architects of the day: John Staub (six homes), Birdsall P. Briscoe (eight homes) and Watkin (one home), among others. 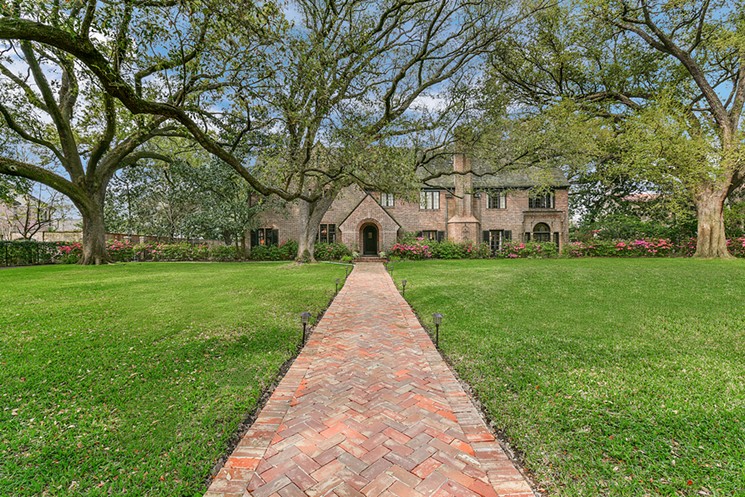 The deed restrictions in Broadacres call for all buildings to be residential, to be set back 60 feet from the street, and to be uniform in their orientation. Notice the recent addition of a custom chevron brick walkway at this new listing.
Photo by Prohouse Photos
Now the property at 1324 North Boulevard is on the market for the first time in almost 40 years, but one look and it's clear that the family's stewardship has been a loving one. They have managed to update the property with all the modern amenities that make life easier, while preserving the architectural details designed by legendary architect Birdsall P. Briscoe. 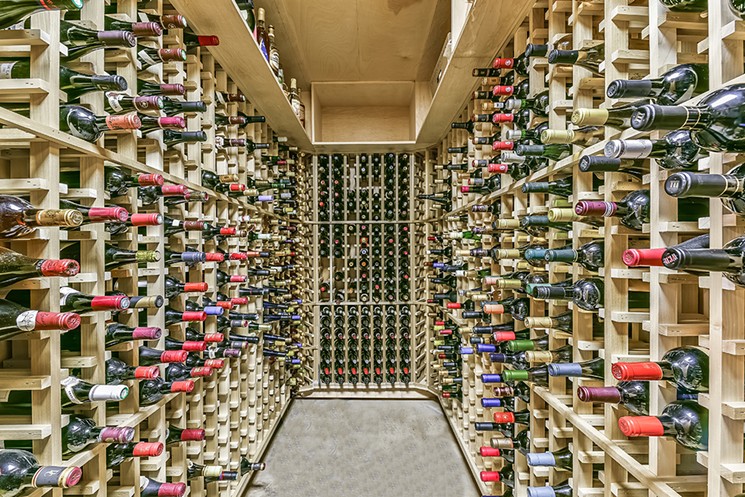 The wine room on the lower level is climate-controlled and has capacity for 1,400 bottles.
Photo by Prohouse Photos
The wine room (shown above) is located in a fully functioning cellar and has room for 1,400 bottles; while the glass front cabinets and large island in the chef-worthy kitchen were designed by architect Jorge Muñoz, AIA, TSA, NCARB, one of the principals at Muñoz + Albin. Updates to the kitchen include double convection ovens, two Subzero refrigerators, two dishwashers, a seven burner induction cook top and a dumbwaiter. 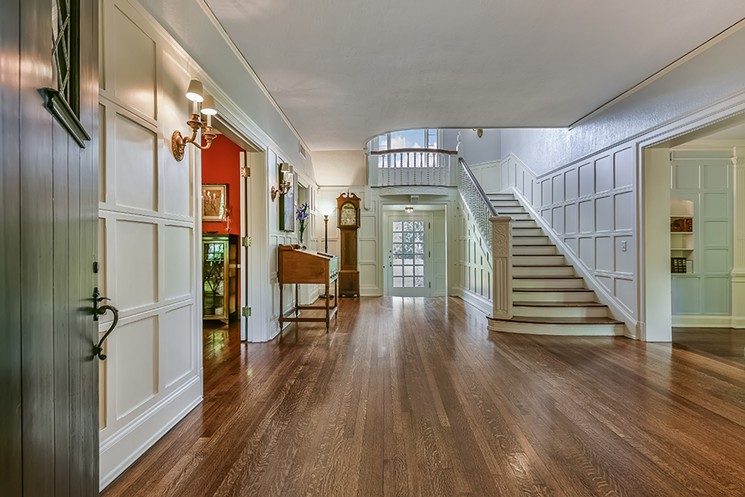 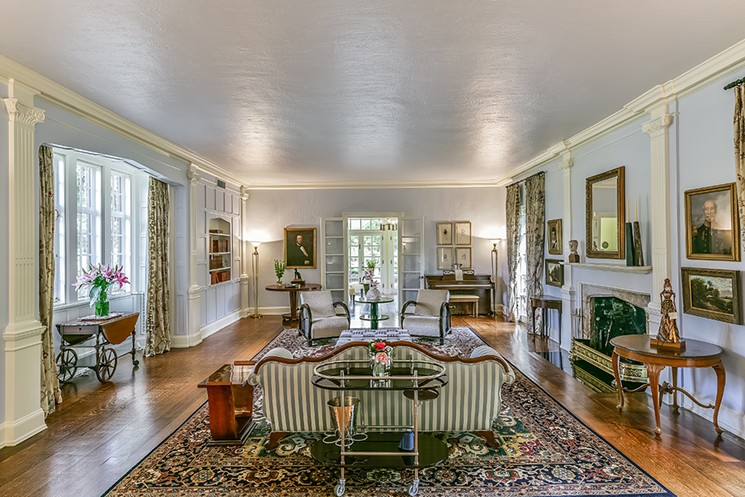 Opposite the fireplace in this formal living room is a recessed window with exposure to the north garden.
Photo by Prohouse Photos
You'll have no shortage of wall space for heirloom family portraits in this five bedroom, five bathroom single-family home built on a 40,460 square foot lot. The property has been listed by Beth Wolff Realtors Real Living for $6.495 million. Explore the property further at HAR.com, or contact listing agent Ed Wolff at 713-622-9339 or at bethwolff.com.

To learn more about the history of Broadacres, visit the City of Houston Planning and Development Department's Historic Preservation Manual at houstontx.gov/planning/HistoricPres/HistoricPreservationManual.
KEEP THE HOUSTON PRESS FREE... Since we started the Houston Press, it has been defined as the free, independent voice of Houston, and we'd like to keep it that way. With local media under siege, it's more important than ever for us to rally support behind funding our local journalism. You can help by participating in our "I Support" program, allowing us to keep offering readers access to our incisive coverage of local news, food and culture with no paywalls.
Make a one-time donation today for as little as $1.