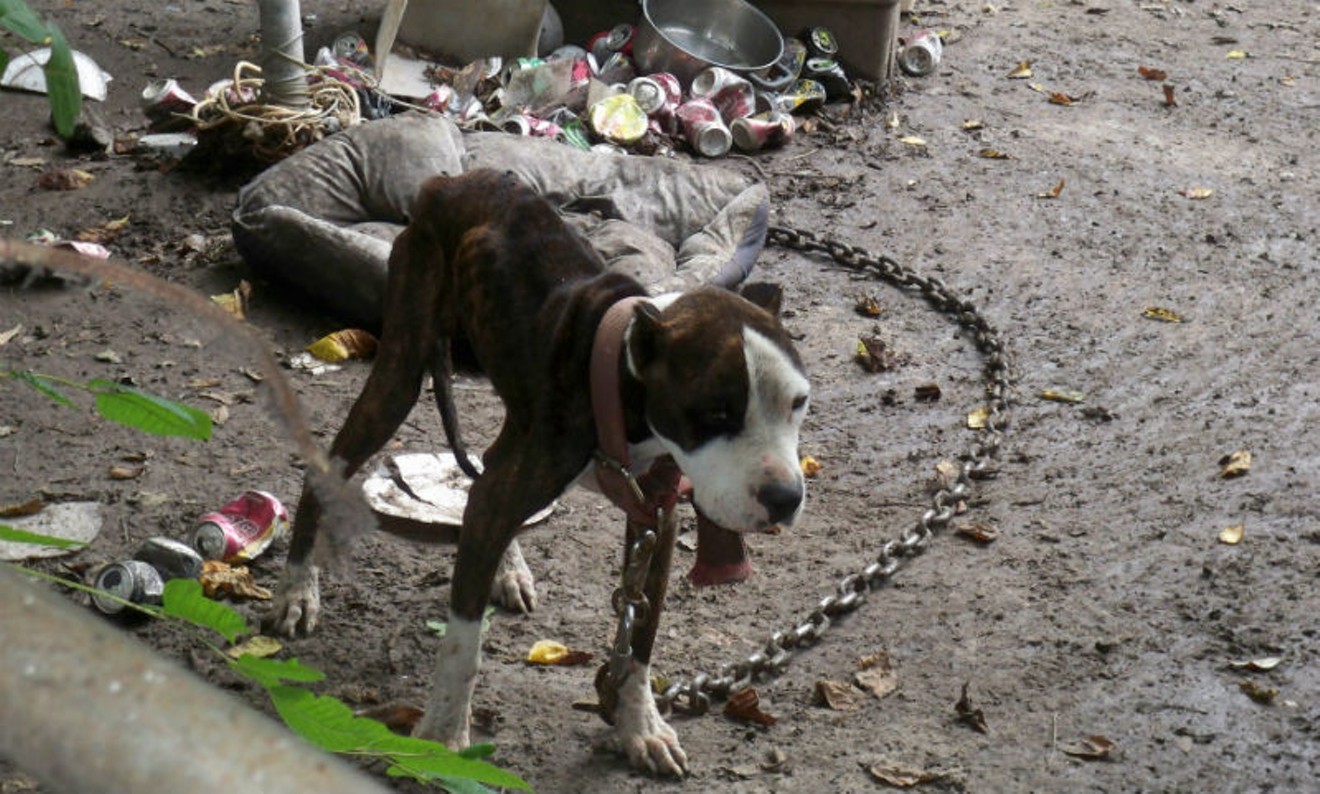 Animal cruelty and neglect in the middle of a trash-filled yard. Photo by the Harris County Precinct 5 Constable's Office
A Houston judge has sentenced a 45-year-old woman to six months in jail after a jury took just four minutes to find her guilty of cruelty and the neglect of the two adult dogs who were in her care. A veterinarian who testified said neither had enough water, food or medical attention.

According to a Tuesday announcement by Harris County District Attorney Kim Ogg and Precinct 5 Constable Ted Heap, the dogs were "emaciated, infested with parasites, and suffering from severe skin infections."

Stephanie Renee Dunn, 45, was sentenced shortly after the jury verdict to 180 days in jail on the two charges of Cruelty to Non-Livestock Animals. The adult dogs had to be euthanized because of their poor condition.

“These animals were suffering, starving, and being treated like trash,” said Assistant District Attorney Whitney Rasberry, of the District Attorney’s Animal Cruelty Unit. “The citizens of Harris County spoke and held this defendant accountable for her actions. No animal deserves to live in the deplorable conditions that these dogs had to endure.”

The only bright spot: A puppy survived and has been adopted.

The Harris County Precinct 5 Constable’s Office  investigated the case as part of the new county-wide Animal Cruelty Task Force.  “Neglect, abuse, abandonment and cruelty toward animals within Harris County will no longer be tolerated,” Heap said. “Law enforcement, along with the District Attorney’s Office, has committed to pursuing these cases and seeking justice.”

Last week, in a case investigated by the Harris County Fire Marshal’s Office, a 43-year-old man was sentenced to seven years in prison for attempting to burn a dog. Edwin Jermaine Stewart, 43, pleaded guilty to Cruelty to Non-Livestock Animals and was sentenced by a judge. According to the news release, that dog survived, but had about 60 percent of his underbelly burned.
KEEP THE HOUSTON PRESS FREE... Since we started the Houston Press, it has been defined as the free, independent voice of Houston, and we'd like to keep it that way. With local media under siege, it's more important than ever for us to rally support behind funding our local journalism. You can help by participating in our "I Support" program, allowing us to keep offering readers access to our incisive coverage of local news, food and culture with no paywalls.
Make a one-time donation today for as little as $1.