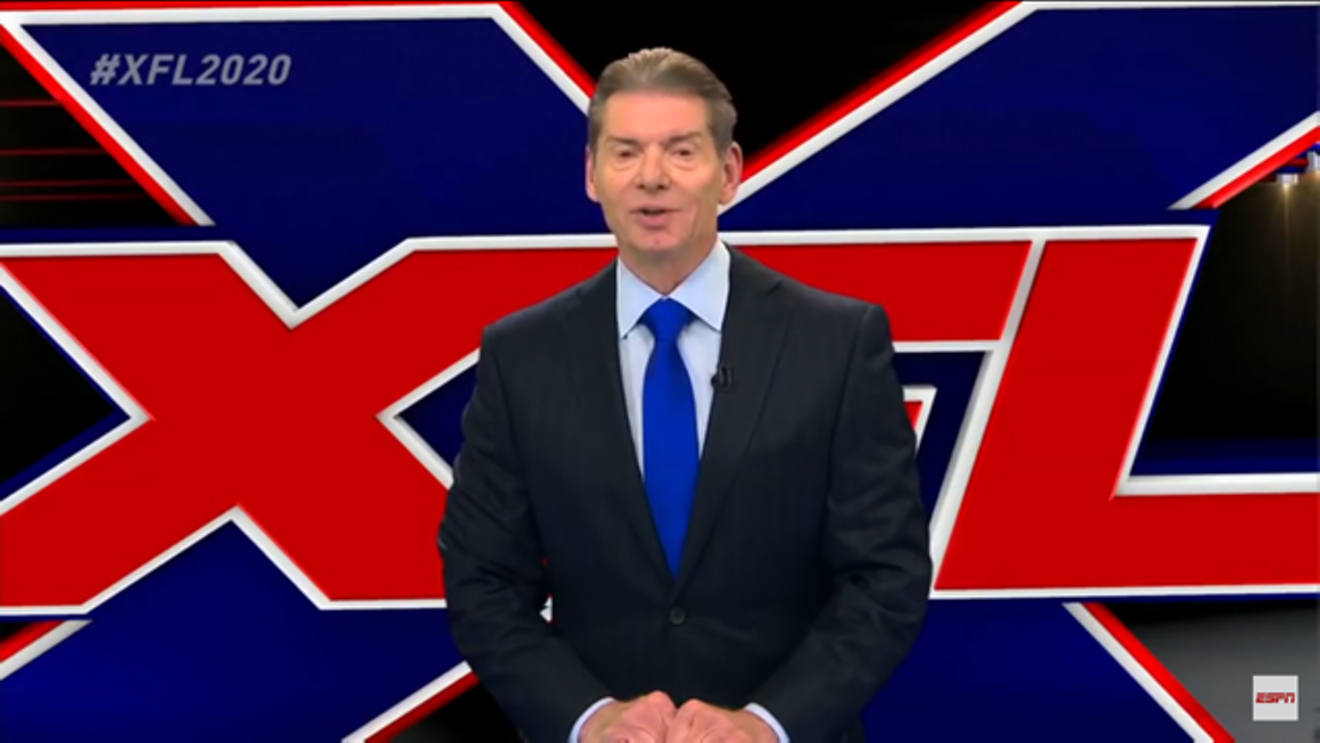 Vince McMahon has clearly learned a few things from the XFL's failure in 2001. Screen grab from YouTube
Webster's defines the word "roughneck," first, as a "rough and uncouth person." Synonyms include ruffian, thug, scoundrel, villain, rogue, rascal, lout, hooligan, hoodlum, vandal, delinquent, rowdy, and bully. It also defines "roughneck" as an "oil rig worker," which is the definition that hist closer to home. And as of yesterday, in Houston, a "roughneck" will be defined as a "football player for Houston's XFL franchise."

On Wednesday afternoon, the second iteration of the XFL, Vince McMahon's attempt at a reboot of his failed 2001 attempt at professional football, unveiled the logos and names of the eight teams that will be playing in the league, starting in February of 2020. Here is the video of the reveal:


In Houston, we can now add the Roughnecks to the Oilers, Gamblers, and Texans on the list of professional teams that have called our city home. Officially, TDECU Stadium on the campus of the University of Houston will be the venue for the Roughneck games, with the challenge being filling as many of the 40,000 seats as possible.

As for the new logo, I find it intriguing, if for no other reason than it's practically begging for the Adams family to sue over how similar it is to the Oilers' old logo:

The XFL brass for each team has spent the last couple months scouting and identifying talent, including showcases in each of the eight cities for college players, fringe professionals, and starry eyed dreamers. This past week, they signed former Pittsburgh Steeler QB Landry Jones as their first of eight franchise quarterbacks, all of whom will be dispersed via draft later this year.

“The XFL is about football and fun, and our team identities are intended to signify just that,” said XFL President and COO, Jeffrey Pollack. “Now it’s up to our fans and players to help write the story. What happens on the field and in the community, in the years ahead, will determine the true spirit of each team.”

The XFL will begin next February with a ten game regular season and two week postseason. The head coach of the Roughnecks is former Oiler assistant, former NFL head coach, and longtime college head coach, June Jones, which should mean, at the very least, an exciting brand of offense, with Jones a disciple of the old run-and-shoot playbook.


Listen to Sean Pendergast on SportsRadio 610 from 6 a.m. to 10 a.m. weekdays. Also, follow him on Twitter at twitter.com/SeanTPendergast and like him on Facebook at facebook.com/SeanTPendergast.
KEEP THE HOUSTON PRESS FREE... Since we started the Houston Press, it has been defined as the free, independent voice of Houston, and we'd like to keep it that way. With local media under siege, it's more important than ever for us to rally support behind funding our local journalism. You can help by participating in our "I Support" program, allowing us to keep offering readers access to our incisive coverage of local news, food and culture with no paywalls.
Make a one-time donation today for as little as $1.