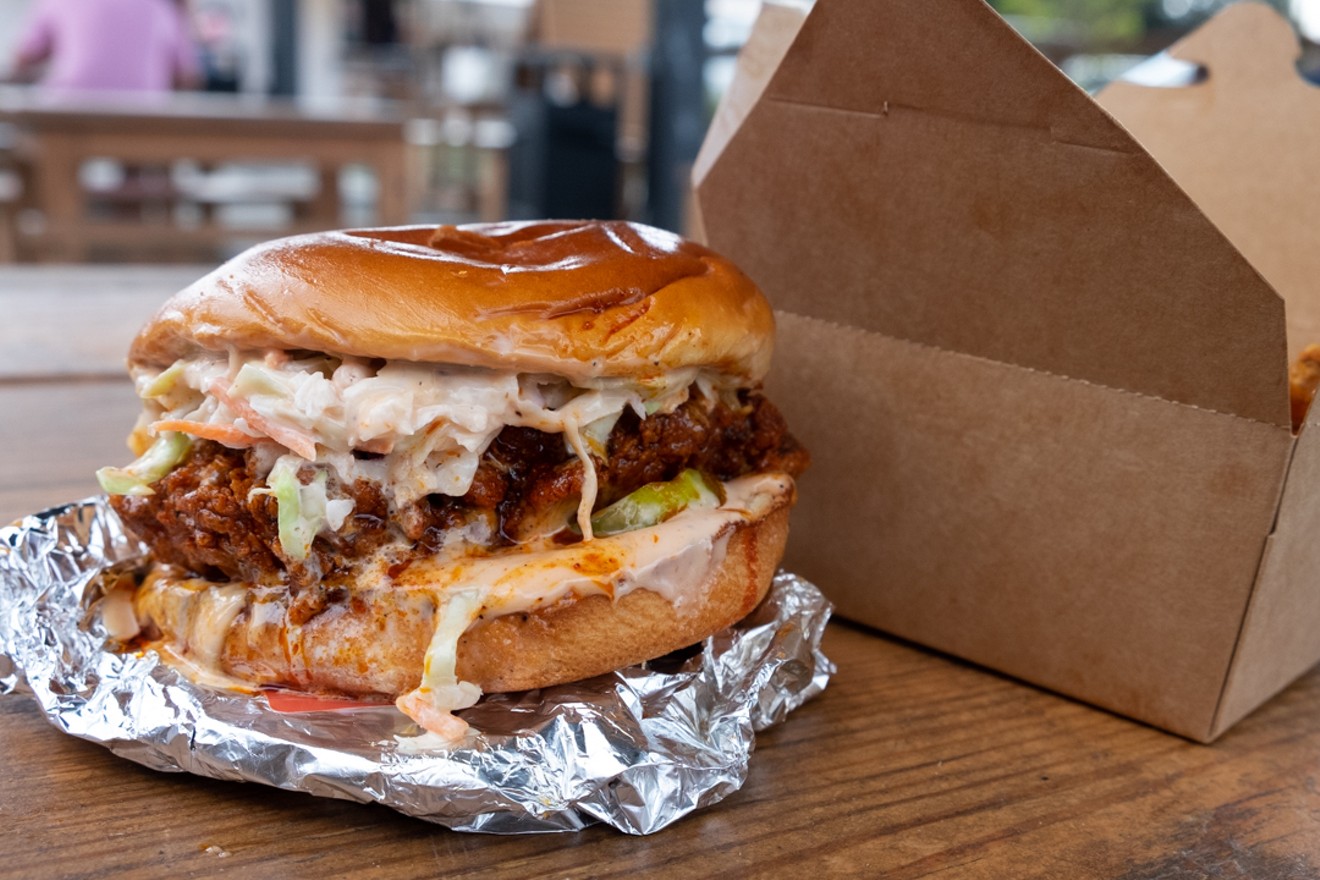 Welcome to the second part of a series where we showcase the noteworthy food and drink experiences of a very weird year. In the spirit of the holidays, it's also a very special collaboration between the food writers of the Houston Press and Houston Food Finder, the online publication founded by former Houston Press restaurant critic and food editor Phaedra Cook. This second edition highlights bakeries, desserts, pop-ups and more. Watch for favorite restaurants, takeout and more coming soon. Part three will cover some of our writers' favorites in Houston Wine. If you missed it, here's Part 1: Bars.

A luscious assortment of cookies from Fluff Bake Bar.
Photo by Julie Soefer
Times are hard right now, but these Houston bakeries remind us that life can still be pretty sweet. Yes, even in 2020.

Fluff Bake Bar, 1701 West 15th: Pastry chef Rebecca Masson’s Willy Wonka-esque creations can help get you through tough times. This year, the self-proclaimed Sugar Fairy has had some of those tough times herself, as her beloved Fluff Bake Bar endured a permit battle with the City of Houston that forced her to temporarily close her new location in the Heights while costly new construction was completed. Thankfully, with the help of a GoFundMe campaign and some true Texas grit, Masson was able to reopen and continue serving the community all the Unicorn Bait, Booty Call Brownies and Couch Potato Cookies we crave (conveniently for takeout, curbside, and outdoor dine-in service). — Brooke Viggiano, contributing writer, Houston Press

Mademoiselle Louise, 1725 Main: Opened almost two years ago, this downtown French bakery has an ever-changing assortment of breakfast pastries and desserts that are sure to please the most discerning tastes. Chef Frederick Fortin named his establishment after his grandmother, Louise, who introduced him to the fine art of patisserie. It is impossible to go wrong at this establishment but top choices include tarte citron, cinnamon rolls and the pistachio or chocolate croissants. — Sandra Crittenden, contributing writer, Houston Food Finder

Pondicheri Bake Lab + Shop, 2800 Kirby: You can get your sugar fix with a side of spice at this Indian street food spot. Just hit the upstairs Bake Lab, where you’ll find cookies and sweets kissed with chili, bergamot and cardamom; muffins studded with carrots and quinoa and an impossibly silky chai custard pie. Enjoy them either on Pondicheri’s newly created, posh patio space or at home via takeout or delivery. — Brooke Viggiano, contributing writer, Houston Press

Smoked birria de res queso taco served with consommé and brisket tamales from JQ's Tex Mex BBQ.
Photo by David Leftwich.
JQ's Tex-Mex BBQ: In the best of times, pop-ups give chefs, especially up-and-coming chefs, opportunities to showcase their innovative creations. In the worst of times, like now, pop-ups are also a means of survival. For Cindy Conde and Joseph Quellar, owners of JQ's Tex-Mex BBQ, pop-ups have served both functions. For their signature smoked birria de res queso taco, they marinate brisket and oxtail in an aromatic chili paste before throwing the meat on the smoker for a couple of hours. Then, they simmer it in more marinade with cinnamon and orange. The result is a deep, rich, smoky stew that was one of the best things I ate this year. Their creations, including fabulous brisket tamales, can be found at pop-ups around town and, occasionally, elsewhere in the state. Follow JQ's on social media to find out the times and locations of forthcoming pop-ups, and be sure to pre-order to guarantee that you snag your favorites. Watch for their new barbecue trailer, which is coming soon. — David Leftwich, associate editor, Houston Food Finder Save room for dessert, the cannoli at Ostia should not be missed.
Photo by Sandra Crittenden.
Maison Pucha, 1001 Studewood: The crêpes à l’orange at this Heights eatery is somehow incredibly satisfying yet, at the same time, a fresh and light ending to any meal. Topped with fresh berries and orange segments with a vanilla Grand Marnier sauce, it delights whether at brunch or after a multi-course dinner.

Ostia, 2032 Dunlavy: This newcomer to the Houston restaurant scene wows with its decadent rendition of an Italian classic: the cannoli. Made with a thin, crispy shell that is filled with a rich, luscious cream and served with a dusting of powdered sugar before being drizzled with honey-rum syrup, this dessert is sure to please

Tony’s, 3755 Richmond: The soufflé at this quintessential fine dining establishment is the ultimate expression of dessert. Made to order, guests choose their flavor from a list that changes with the seasons. Choices include different chocolates, fruits and liqueurs. It is always the most indulgent ending to a meal at this institution of haute cuisine. — Sandra Crittenden, contributing writer, Houston Food Finder

Think Tacos is one of Houston's food trucks and restaurants that jumped on the birria tacos trend.
Photo by Candido Serrano.
Birria Tacos: Where Instagrammers go, Houston diners follow. Though birria tacos, filled with a classic Jalisco stew of goat or beef, have been around for years, over the past several months these have taken over Houston social media in a storm of hashtags. In most cases, the tacos are made by dipping the tortillas in a consommé made from cooking the stew (which also serves as a dip for the tacos) before cooking them on a plancha with cheese and the stew meat. While restaurants such as El Big Bad and Candente have offered birria tacos, food trucks such as Blk Mkt Birria, Muiishi Makirritos and Think Tacos, as well as pop-ups like JQ's Tex-Mex Barbecue, really solidified the tacos' popularity in Houston.

Hot Chicken: Unlike some food trends, Nashville-style hot chicken didn’t take over Houston overnight. The craze has been building thanks to restaurants such as Gus’s Fried Chicken, which opened on Washington Avenue in 2018. In 2020, suddenly several establishments specializing in this spicy fried chicken took off, with places such as Main Chick, Bird Haus and Mico’s Hot Chicken — which has a constant line around the building. That suggests this may be a new mainstay instead of short lived trend.

Mochi Doughnuts: These Japanese-American hybrid pastries, usually made with rice flour (which makes them gluten free), have been in Houston for a few years. But in 2020, the donuts popularity rose to new heights with the help of social media influencers. These light, airy doughnuts started showing up at single-day events at area tea shops, eventually finding permanent homes at brick-and-mortar locations such as Mochinut and delivery-only businesses like Doughchi and Miso Sweet. — Ryan Kasey Baker, contributing writer, Houston Food Finder
__________

The Other Favorite Houston Food & Drink Experiences of 2020

Part 1: Bars
KEEP THE HOUSTON PRESS FREE... Since we started the Houston Press, it has been defined as the free, independent voice of Houston, and we'd like to keep it that way. With local media under siege, it's more important than ever for us to rally support behind funding our local journalism. You can help by participating in our "I Support" program, allowing us to keep offering readers access to our incisive coverage of local news, food and culture with no paywalls.
Make a one-time donation today for as little as $1.