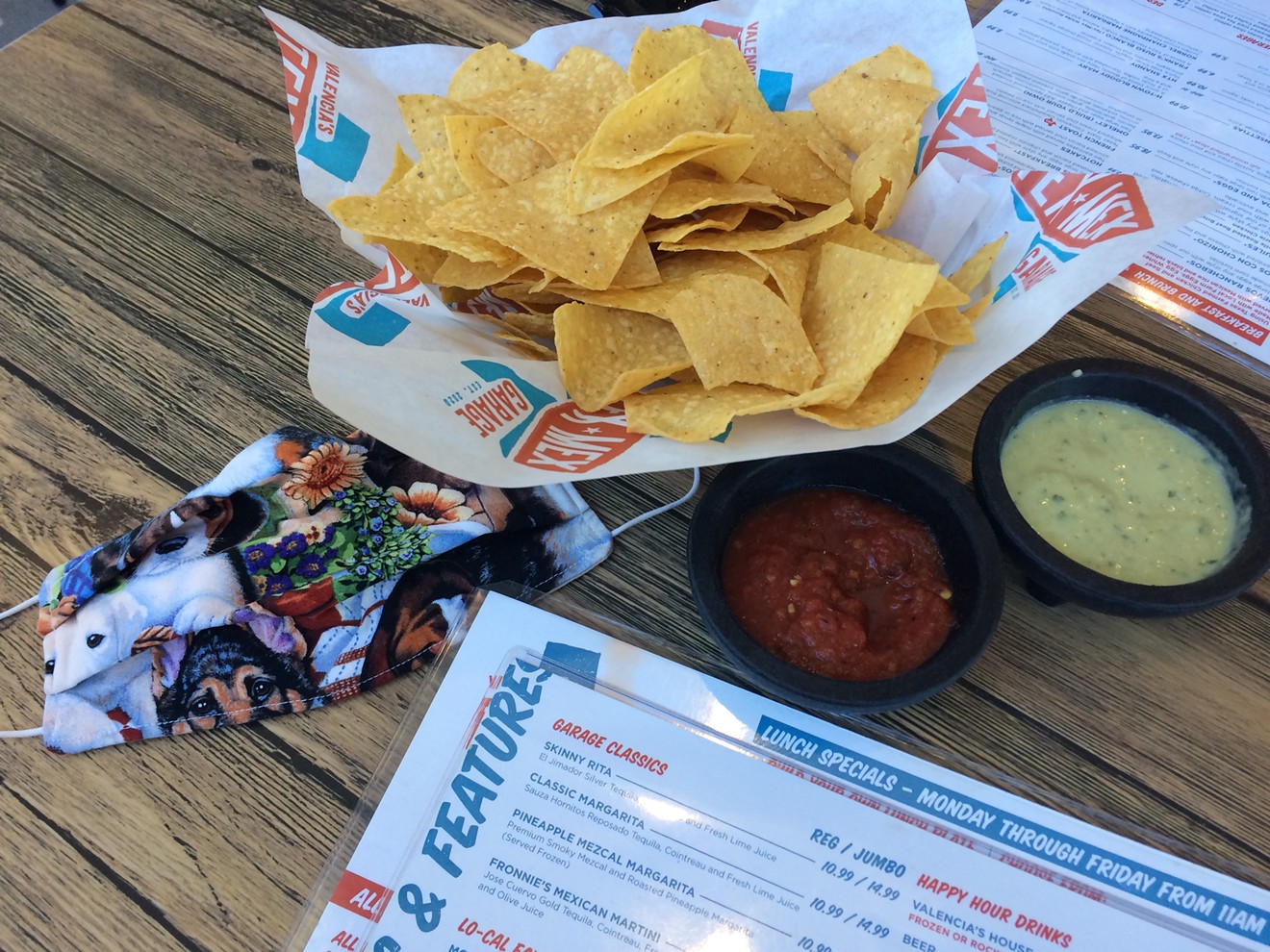 The holiday season is upon us and while it may not be as festive or grand as previous years, there are still many little joys to celebrate. One of those little joys are the sunshine-filled days that peek out occasionally in December. While our Houston summers are often unbearable, the mild winter days we enjoy are the envy of snow-bound Northerners who have a double whammy of COVID restrictions and weather obstacles.

It was one of those beautiful sunshine-y days when my husband and I found ourselves thirsty after running a few errands near the 610 Loop and our old stomping grounds. We used to live in Oak Forest as newlyweds, enjoying the neighborhood's proximity to Downtown, Midtown and all the places that were hip and cool and made us feel as if we were also hip and cool. In the late 1990s, Oak Forest and Garden Oaks had very few restaurants or bars to speak of. There were a couple of small Mexican restaurants and a bounty of fast food but not much else. The interior is bright and colorful.
Photo by Lorretta Ruggiero
So much has changed in the past 20 years. Our former rental, a two-bedroom, one-bath ranch on Wakefield, has long since been razed to make way for a much larger two-story home that I shudder to guess its listing price. I won't go into the regrets we have in not buying something in that area back then, but babies and good schools have a way of dragging young couples to the suburbs.

Now, as our kids are getting older, we find ourselves wishing we lived closer to the action. So, as we completed our errands and trip to Trader Joe's (our burb is TJ-less) I suggested we try Valencia's Tex-Mex Garage since it recently opened October 29 and looked pretty groovy. Plus, we had not had frozen margaritas in a long time. 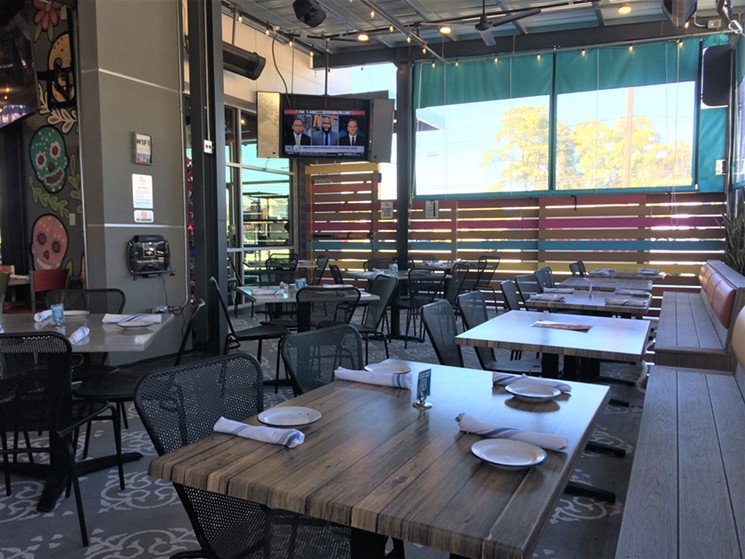 Valencia's patio offers the best of both worlds.
Photo by Lorretta Ruggiero
The multitude of tire shops and auto collision places that lined 34th in our day have made way for restaurants and retail shops but it still has the same feel as it did then. We pulled into Valencia's parking lot and were happy to see that it was not busy in the late afternoon.

As we entered, we admired the brightly decorated walls and the slick bar to the right, with backlighting that changes colors every couple of seconds. The Dia de los Muertos murals of calaveras adds to the funky vibe. Glass garage walls open to the patio which is surrounded by colorful, slat fencing making the patio feel more like part of the interior.

There was only one other table with guests so we felt safe social distance-wise.  A couple of people were at the bar and a few employees sat taking a break. Our server showed up immediately and we were told that it was happy hour. We ordered our usual jumbo frozen margaritas. Margaritas on a December afternoon hit the spot.
Photo by Lorretta Ruggiero
My husband ordered the lunch combo plate with two items.  I decided to get a couple of the happy hour small bites since I usually forego the typical rice and beans served with entrees. I chose the Rotisserie Chicken Truck Tacos ($5.95) and the side of H-Town Loaded Queso ($5.95).

Our margaritas were tasty, perfectly frozen and had a nice kick. I know most cocktail aficionados like to go for the premium margaritas but I feel it's a bit of a luxury especially since I can make premium margaritas on the rocks at home for far less money. When I go to a Mexican restaurant, I want the out-of-the-machine slushie that I cannot achieve at my own cantina. Even on happy hour, the jumbo house rita was a penny shy of ten bucks. The house margaritas are usually $8.99 for the regular and $11.99 for the jumbo.

I was glad to see that there was a red and a green salsa brought with the chips. That gladness turned to sadness when I tasted them. The chips were mediocre and the salsas were no better. Neither one boasted any sort of spiciness, or frankly, much flavor. Lunch combos are a good value.
Photo by Lorretta Ruggiero
Our food arrived quickly. My husband's lunch combo plate ($11.99)  consisted of two pulled brisket quesadilla triangles, a chili-topped cheese enchilada, rice and refried black beans. My husband adores black beans but I usually hate them because they taste like tar in my opinion. However, I took a bite of his refried version and they were quite good. The brisket quesadilla was a standout and the cheese enchilada was better than most, including its sauce.

My chicken tacos on the other hand were a bland disappointment which is surprising considering that the rotisserie chicken is a main feature of the restaurant's menu. The three small tacos were served in a taco holder, or as I like to call it, a taco accordion. They were topped with way too much iceberg lettuce, some nicely ripe red tomato dices and a bit of queso fresco. Besides the fact that the tacos fell to bits when I lifted them from their stainless steel bed, the tender chicken was simply tasteless. My only hope was the red salsa, which I wasn't overly fond of in the first place. I offered one to my husband but he declined, happily immersed in his brisket quesadilla and making a major dent in my loaded queso. One of these things is better than the other.
Photo by Lorretta Ruggiero
The queso was a cup of melted cheese heaven. It was some of the best, if not the best, queso I have ever had. The meat was so tender, it seemed to melt into the queso itself. It says on the menu that it is chipotle smoked brisket but it almost seemed more like minced beef, though it wasn't chewy at all. The pico de gallo gave it a a bit of fresh vibrancy.

All in all, the chicken tacos were a fail, as was the elote we ordered to go for our daughter. When we got home, there were only two mini cobs of corn rather than the three described on the menu. For $4.95, it was a bit of a bust. However, that could have just been a one-off. And, I realized later that I had received three chicken tacos instead of the two listed on the menu. It all balances out. Waltrip alumni might find themselves on the wall.
Photo by Lorretta Ruggiero
Valencia's is a brand new place so everything is in tip-top shape including the very nice restrooms. It's fun to look at the wall in the restroom hallway which is covered in a Waltrip High School collage including photos of brother and sister owners Ricardo Valencia and Vienna Valencia Bement from their high school days at Waltrip which is located across the street. It adds to the neighborhood feel of the restaurant but be aware of the doors opening and closing as people make their way through the hallway. I nearly got beaned. The cool lighting at the bar changes repeatedly.
Photo by Lorretta Ruggiero
When we left, the bar had filled up with guys and a few more tables had been sat. We stopped to admire the Christmas tree with its taco and avocado ornaments. We were glad we had made the decision to try something other than the local Tex-Mex joints in our own neighborhood. The ornaments look good enough to eat.
Photo by Lorretta Ruggiero
The awesome queso, yummy brisket and tasty margaritas are what would bring us back to Valencia's along with the colorful decor, comfortable ambiance and friendly service. Next time, I'll try the fajitas or the seafood enchiladas. Post pandemic, we will probably bring some friends and enjoy sitting at the gorgeous bar for a return-to-normal happy hour.

And I can deal with the lackluster salsa so long as I have that queso for chip dipping.


Valencia's Tex-Mex Garage
2001 W. 34th
texmexgarage.com
KEEP THE HOUSTON PRESS FREE... Since we started the Houston Press, it has been defined as the free, independent voice of Houston, and we'd like to keep it that way. With local media under siege, it's more important than ever for us to rally support behind funding our local journalism. You can help by participating in our "I Support" program, allowing us to keep offering readers access to our incisive coverage of local news, food and culture with no paywalls.
Make a one-time donation today for as little as $1.