I live north of Houston in the suburbs. Though my culinary travels take me all over Houston, it's always nice to have a solid go-to restaurant or two nearby that I can rely on. For my family, Playa Azul was one of those places. Sometimes, we took our teenage kids. Mostly though, it was a mid-day jaunt for oysters, shrimp and kick-ass margaritas for my husband, Classic Rock Bob, and me. It was located conveniently at the front of our subdivision, within stumbling distance of our home.

Last year, however, we saw a notice posted outside the window announcing its closure due to repair issues. Though it hinted at reopening, it wasn't until I saw some action on its Facebook page that I began to regain hope that it would return. For months, regular customers would beg them on Facebook to release a reopening date. The response was always about waiting on inspection and permits, a familiar refrain in the restaurant world. 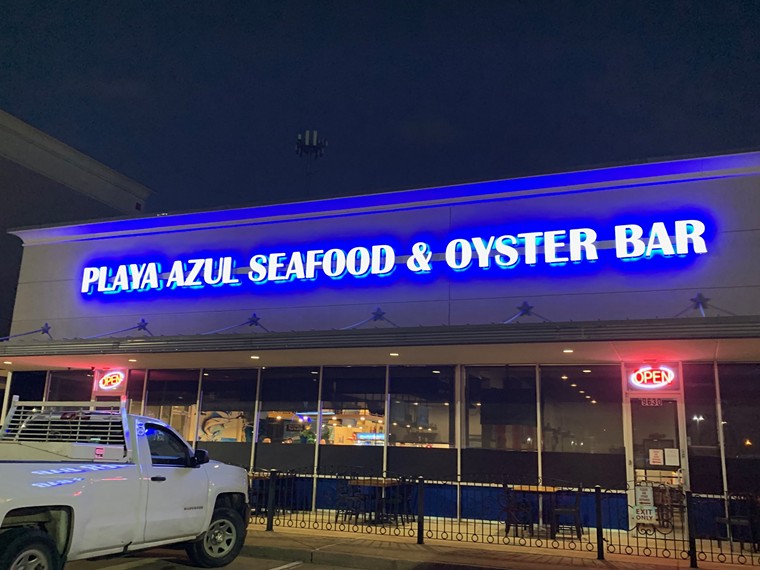 The new spot is much more noticeable.
Photo by Lorretta Ruggiero

Playa Azul did finally reopen November 1 in a new spot, a couple of miles from its original Grant Road location. With the Thanksgiving holidays over, the opportunity to check out the new space finally presented itself last week. This time we took our now college-age progeny with us, letting our 18-year-old son drive us in the chaos that is Jones Road.

Those who live in the area near Jones, between Highway 290 and FM 1960, know the score. There are a multitude of businesses but also a multitude of oddly placed medians, necessitating legal and illegal U-turns, always into oncoming traffic. Playa Azul is located on the south side of Jones, making it easy for those coming from 290. We, unfortunately, had to make a left turn into a subdivision, then a U-turn, then take a right into the parking lot. With my son driving, this was raising Classic Rock Bob's blood pressure to a dangerous level. Thankfully, margaritas were in the near future.

The new Playa Azul is a big change from the original, which took over an old Wendy's restaurant building about 13 years ago. For many years, it even had the Wendy's glassed-in solarium until it replaced it with an open air patio. The new space is bright and airy. There is still a U-shaped bar which was a big feature of the old restaurant. Unlike the original, this one is underlit with blue lights and everything is shiny and new. There were a few guests at the bar and a couple of tables were set in the main dining area. There is a second dining room which doubles the space of the original.

Not stumbling strong, but still good.
Photo by Lorretta Ruggiero
Our server came over and took our drink order and we got excited about finally having the margaritas we had missed for so long. We also ordered a dozen oysters ($17.95 that day). Our server returned with two large frozen lime ritas for Classic Rock Bob and me and a small strawberry margarita for my lightweight 22-year-old daughter. The first few sips told me that these were not quite the same. They still had a floater of orange liqueur on top (which I guessed to be Gran Gala), but they were a bit on the limey side and not as strong as we remembered. In fact, lightweight daughter was able to order a second small strawberry rita, though she only made it halfway through before I took the remainder off her hands.

We were soon served our dozen oysters. Raw oysters are not my favorite seafood but my husband and daughter love them. I have only begun to eat them in the past few years because a food writer has to be open to pretty much everything. I took a juicy one and just added a tiny dab of horseradish. This is an area wherein Playa Azul has almost always excelled. My husband and I have been seated at the bar many a time and watched as the fresh oysters were shucked. These were plump and glistening with just a slight hint of brine. And there were twelve. So often, when we sat at the bar at the former location, we received a baker's dozen. Times, they are a changin'.

The gumbo tastes the same and that's a good thing.
Photo by Lorretta Ruggiero
Playa Azul's menu is mostly coastal Mexican cuisine. Because my son doesn't eat seafood, we always wished that there were a few more non-seafood items available. As part of its revamping, the restaurant has added a page of Mexican dishes, so my son ordered a beef fajita quesadilla and my daughter and I chose to split the beef Tampiquena ($13.99). I added a cup of seafood gumbo as well while Classic Rock Bob ordered the Double Stuffed Crab meal ($11.95).

My seafood gumbo tasted the same as the old location, though it wasn't as spicy as usual. It's probably not for purists, however. The seafood is salad shrimp with a little crab, mixed in a slightly dark roux. The cup was $3.50, so it's a pretty good deal for a pretty good gumbo.

My son's quesadilla ($9.95, half-order), however, was not a thing of beauty. The flour tortillas didn't seem to be grilled at all and the garnish was a wee bit of sour cream. It looked as if the fajita meat and cheese were added to the tortillas and they were popped in the microwave.

The Tampiquena looked prettier than it tasted.
Photo by Lorretta Ruggiero
The Tampiquena was another disappointment. Unlike most tampiquena platters, the steak had been already sliced, so it was just basically fajita meat. The slices of meat were a bit chewy and not particularly flavorful. The beef had not a hint of grill flavor. The cheese enchilada was almost inedible, a transgression in a state where cheese enchiladas are revered. The beans and rice would have been fine if there had been a hint of seasoning. I hate to diss one of my old time favorite hang-outs, but the new Mexican menu items, or at least the ones we tasted, failed miserably.

On the other hand, my husband's stuffed crabs were better than ever, according to him. Very fine bread crumbs created a firm, crispy crust on the crabs with little filler within. When I took a bite of the stuffed crab, I thought, "Finally some seasoning."

These stuffed crabs made Classic Rock Bob happy.
Photo by Lorretta Ruggiero
And that was definitely the issue on several of the dishes. No heat, no spice and no salt. Playa Azul is not a standard Mexican restaurant so I understand the extra charge for chips ($2.50) and salsa ($2.50), but a little side ramekin of salsa for the Mexican dishes would have been a welcome accompaniment.

In the middle of our meal, we asked for an order of hushpuppies. I do have a beef about the fact that the seafood platters don't come with a hushpuppy or two. Still, for $2.95, an order of hushpuppies is doable and make a nice snack. Unfortunately, these came out a little overdone. They still tasted okay because, unlike several other items, they were actually well-seasoned.

The service was very good and our waiter was pleasant, telling us the reasons behind the move. It seems the landlord at the previous location didn't want to make some much needed repairs. That former spot is currently up for lease.

The new location has an upgraded bar.
Photo by Lorretta Ruggiero
While the new space is attractive and roomy, I miss the laid back feel of the old spot. Not to sound like an old Red Hot Chili Peppers fan, "but I knew them when." I liked sitting at the bar on a Saturday afternoon with blue collar guys enjoying their micheladas and a bowl of seafood soup. The giant fish tank at the front and the Spanish television shows in the background added to the ambiance. There were always two women working like crazy, plopping large boiled shrimp in front of customers or working on a batch of gumbo. I didn't see them this visit. I hope they're still there.

Playa Azul has a fancier look.
Photo by Lorretta Ruggiero
Now, it's a much posher experience, including the prices. Though the increases are reasonable, the addition of a 4 percent service fee for using a credit card left me feeling slightly ripped off. I know restaurants have suffered under the COVID pandemic but so has their customer base. When people dine out on their hard-earned dollars, upcharges and unexpected fees are a turn-off. When you throw in the fact that customers are often unaware of which form of payment a restaurant currently accepts (cash only, credit only, the blood of your firstborn child, etc.) it can be easier to just cook at home.

Credit card fees aside, we had mixed feelings about the reopened Playa Azul. The new space is more upscale and likely to bring in local residents. The kitchen is still on point with the seafood. I will return to see if the crab fingers (which are hard to find nowadays) are still the same and I expect the boiled shrimp, gumbo and oysters will always be good. Maybe the margaritas were just not as kick-ass that day. They were still pretty tasty, especially at $6 for a large frozen.

Playa Azul Seafood & Oyster Bar
9630 Jones
346-206-3185
KEEP THE HOUSTON PRESS FREE... Since we started the Houston Press, it has been defined as the free, independent voice of Houston, and we'd like to keep it that way. With local media under siege, it's more important than ever for us to rally support behind funding our local journalism. You can help by participating in our "I Support" program, allowing us to keep offering readers access to our incisive coverage of local news, food and culture with no paywalls.
Make a one-time donation today for as little as $1.