Having to spend a sunny Houston afternoon running errands can always be made better with a stop for lunch. Finding myself in the near downtown area, I decided to head for the Heights and try the recently opened Shandy's Cafe on W. 19th and maybe stop in at a few antique shops, too.

It's been a couple of decades since I lived in Oak Forest. Its proximity to Shepherd and the numbered streets meant I spent a lot of time hunting through the thrift stores, antique shops and eclectic stores in the W. 19th and Yale area. While some of it still looks the same, construction and modernization have changed its face somewhat. There are still people hanging about conversing and the exterior of some of the stores still have the small town quality that draws people in to the Heights but there's definitely a move away from the nostalgia and toward modern sophistication.

Shandy's Cafe has a full bar.
Photo by Lorretta Ruggiero
Shandy's Cafe in the Heights is the second location for the restaurant which has another location at 5814 Memorial. Its owner, Shandy, was born in London, England to Nigerian and Jamaican parents. The family eventually made their way to California and Shandy herself ended up in Houston as a graduate of the University of Houston's Hilton College of Hotel and Restaurant Management. She opened the Memorial location in 2005. While some of the spices of her heritage make it onto the menu, most of the offerings, like burgers and sandwiches, are pretty American in their approach.

And originally, it was one of those sandwiches that I was going to try. I was craving something fattening to soak up the after effects of a jumbo margarita the night before. Classic Rock Bob and I have both received our vaccines so we are venturing forth a little more for dining and drinking pleasures. With masks, of course.

I was tempted by the burger options but decided on the Buffalo Chicken Sandwich. I was also in the mood for fries. Then, my eye landed on the Grilled Redfish with Cream Sauce. I hadn't had fresh fish in a while so I asked my friendly server which she would choose between the salmon dish and the redfish. She said that she had tried the redfish the day before and recommended it. I ordered a glass of La Marca Prosecco and chose spinach as my vegetable side, though I was sorely tempted to ask for fries as a substitute. 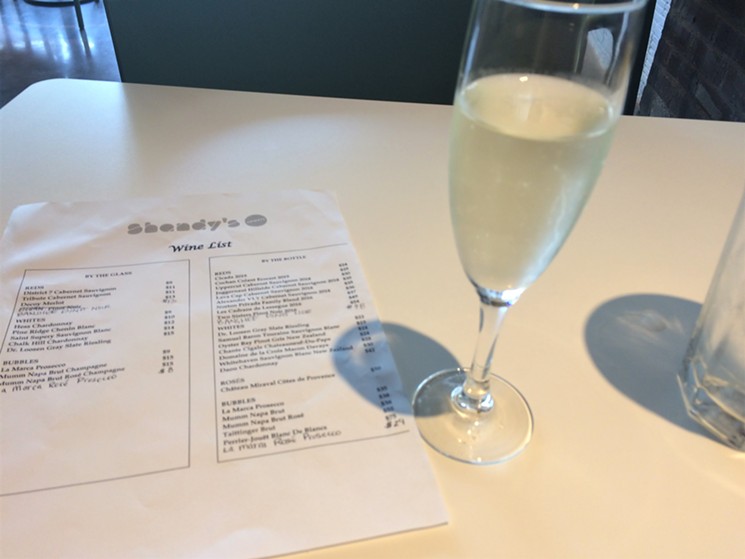 A sad glass of prosecco.
Photo by Lorretta Ruggiero
My server returned with my prosecco. I was disappointed in the pour. For $9, a three-fourths-filled glass afforded me very few sips and I had to nurse it so that I could enjoy it with my meal. And, I hate to point out another negative, but the bottom of the glass had something stuck to it that I could not get off.

While I waited, I admired the decor. The dark blue walls were the color that I wished I had chosen for my bathroom walls rather than the baby blue that currently adorns them. The hanging pendant lights give an effect of spaceships about to descend upon the bar tables. Bob Marley smiles down on the bright green chairs and the open bar. As for the restrooms, I can only attest for the women's. It was a large single and brand spanking new with seafoam green glass tiles lining the walls. 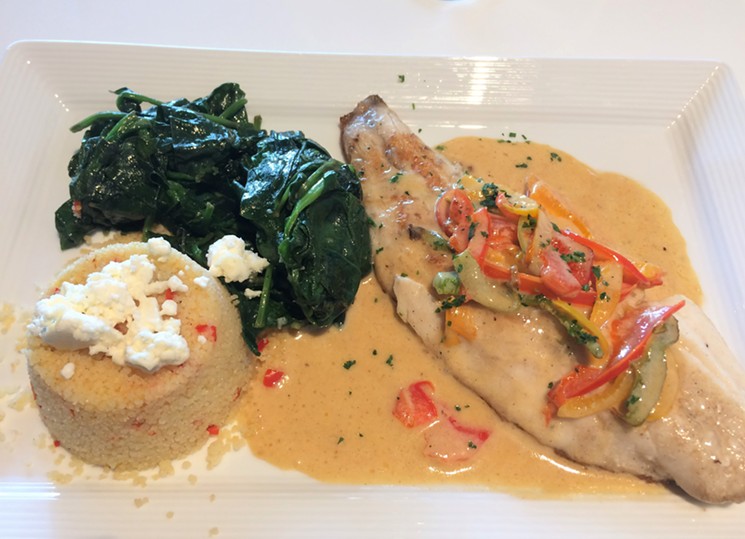 A well-composed dish makes a tasty lunch.
Photo by Lorretta Ruggiero
My server was an upbeat young woman sporting a pretty, beaded mask. She made her rounds with a lot of positive energy and seemed to really care about the customers. She placed my dish before me and asked if I wanted anything else. Another glass of wine crossed my mind but I demurred.

At first, I wasn't too thrilled about the multi-colored, thin slices of bell pepper topping the fish. I am not a fan of bell peppers and I think they often overwhelm a dish. I was about to scrape them off the top when I decided to give them a go. They were sweet, mild and tender. And I ate them all despite my earlier reservations.

The fish itself was also mild and I thought it could have used a tad more seasoning despite the lemony cream sauce on top. However, once I began eating the skin underneath, I discovered the flavor. For each flaky bite of fish, I made sure to get a little skin with it because it was seasoned and crisped beautifully. 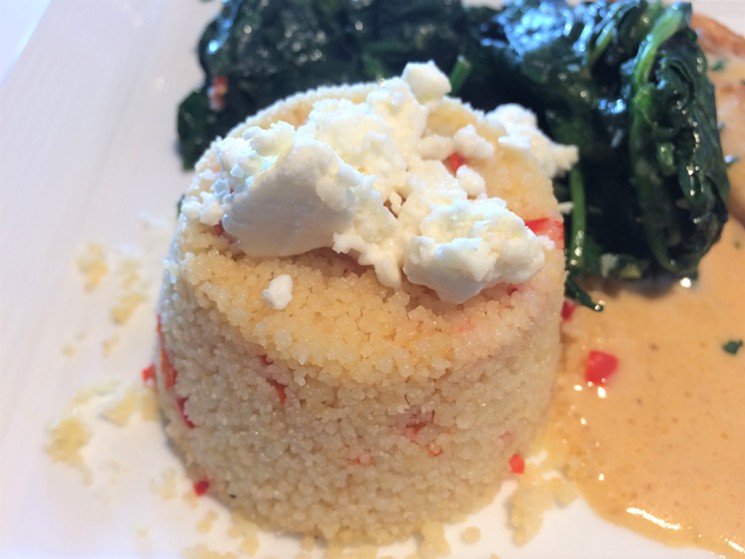 It's so fluffy!
Photo by Lorretta Ruggiero
The accompanying couscous was fluffy and perfectly cooked, topped with feta cheese. The spinach was simply sauteed, just enough to wilt it, which is what I like. I added a little cracked pepper to my taste. As a meal, the three components made a nice dish that didn't make me feel like I needed a nap, as the Buffalo Chicken Sandwich would have certainly done.

Thinking of the rest of my errands, I decided to order something to-go so that I wouldn't have to cook that evening. Knowing my husband is a chicken salad fan, I chose the Salad Sampler which comes with a scoop of tuna salad, chicken salad and pesto pasta atop a bed of chopped lettuce with tomato, olives and strangely, pecans. And for good measure, I added a side of French fries. I had errands to run. I might need fries for sustenance. The aliens are coming!
Photo by Lorretta Ruggiero
I could hear some discussion about my order in the kitchen because the "to-go" part seemed to have been confused but it arrived soon enough and I headed back to my car to put the Salad Sampler in my cooler brought along for my trip to Trader Joe's. I completed my errands and almost my crispy fries, though I saved a few to reheat for Classic Rock Bob. I'm generous that way. The Salad Sampler fed two.
Photo by Lorretta Ruggiero
Later that evening, the two of us made a fairly healthy dinner from our Salad Sampler, which was a good thing because the $18 price tag seemed a bit steep for items that could easily come from a good deli for less. Classic Rock Bob is used to more mayonnaise in his chicken salad and the version at Shandy's is barely kissed by mayo, as is the tuna salad. However, the lack of mayonnaise made the  finely shredded chicken a better candidate for mixing in with the salad greens and the pesto pasta shells. The mayonnaise-based dressing for the salad brought to mind the creamy, under-seasoned dressings one finds at British pubs. However, it worked fine for the sampler as a whole. There was only one pecan half in my salad. It was candied and tasted delicious but it had no place in that salad really. I could have used a couple more olives instead. A side of fries for $4 is a good portion.
Photo by Lorretta Ruggiero
I have never been to the other Shandy's Cafe which is in a strip center and according to many accounts, could use some updating. So, for Shandy's regulars who would like to enjoy the food in a more welcoming space, the Heights spot is a great alternative. The food was very good and the ambiance was relaxed. The two flat screen televisions are unobtrusive and allow for some March Madness viewing. There are two small tables outside and they were always filled while I was there. The brief wine list is fine for a cafe, though a little better pour would be nice. The prices at Shandy's are also on the higher side, especially for lunch. However, I don't think the $21 I paid for the redfish was too much. Seafood prices are exorbitant right now so it was on point.

And I still got my fries.

Shandy's Cafe
315 W. 19th
713-485-0705
shandycafe.com
KEEP THE HOUSTON PRESS FREE... Since we started the Houston Press, it has been defined as the free, independent voice of Houston, and we'd like to keep it that way. With local media under siege, it's more important than ever for us to rally support behind funding our local journalism. You can help by participating in our "I Support" program, allowing us to keep offering readers access to our incisive coverage of local news, food and culture with no paywalls.
Make a one-time donation today for as little as $1.