Get some street corn cred at Ambriza. Photo by Lorretta Ruggiero

Ambriza, 9945 Barker Cypress, opened August 15. This is the second location for the Mexican restaurant, with its Dia de los Muertos-inspired decor and fresh, traditional twists on regional Mexican cuisines. Owners Amber and Julio Garcia  opened the first location in October 2016 near Vintage Park on Louetta.

Owners Julio and Amber Garcia (on the right) celebrate the soft opening of Ambriza's Cypress location.
Photo by James Kaatz/Illumination Marketing
With the eyes of La Catrina upon you, Ambriza gives diners some Day of the Dead eye candy on which to feast their eyes. It's fun and unique. My daughter and I once had a server at the Louetta location who was sporting the traditional face painting of the catrinas. The catrina figure started as a satirization of wealthy Mexicans by newspaper cartoonist, Jose Guadalupe Posada, around the beginning of the twentieth century, according to zinniafolkarts.com.

The street corn is a great starter, as my daughter will enthusiastically tell you, and is liberally sprinkled with Tajin. A number of the dishes feature the chili lime salt, so if that's not your thing or you would prefer it on the light side, let your server know. 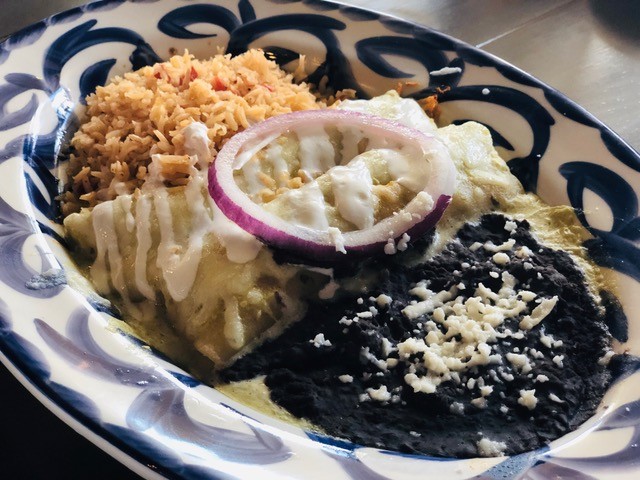 Ambriza brings traditional Mexican flavors to Cypress.
Photo by James Kaatz/Illumination Marketing
The restaurant is not Tex-Mex (no queso), but there are items that will please those who are used to the fusion side of Mexican food. Fajitas are always a safe bet and diners can choose from beef, chicken or butterflied lime shrimp or do a mixta. For something more traditional, try the Pastel Azteca, a layered dish of fried tortillas, pulled chicken, poblano sauce, sour cream, menonita cheese and rajas poblanos. A hearty dish like Short Ribs en Salsa de Chile Secos with its five-hour braised short ribs over corn and cotija-poblano polenta will be an especially comforting treat when the temperatures drop. The Day of the Dead theme at the Louetta location will be on display in Cypress as well.
Photo by Lorretta Ruggiero
Of the Cypress Towne Lake location, owner Amber Garcia says "We're so excited to be able to expand our family driven vision of what a Mexican restaurant can be." From the buzz on social media, Cypress residents are excited as well.

The grand opening for Ambriza's new restaurant will be October 26. During the day, there will be family friendly festivities, including face-painting and visits from the local fire department. At 9 p.m., an adults-only fiesta begins with live music and dancing on the Towne Lake Boardwalk. There will be plenty of margaritas flowing, too. 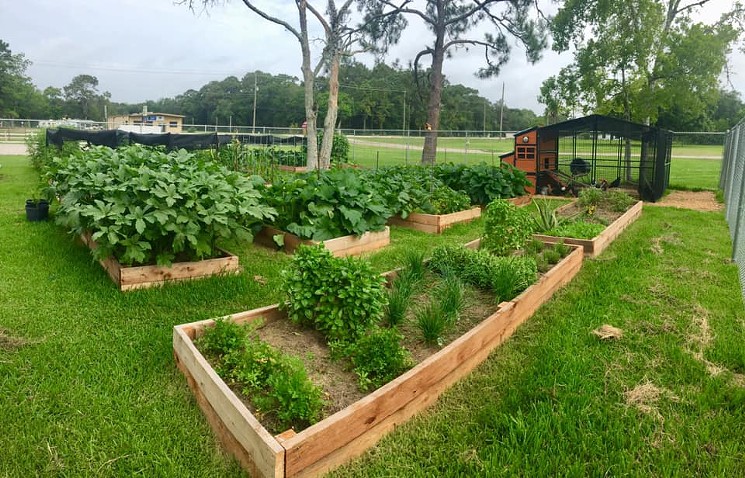 The little garden that could at Penny's Beer Garden.
Photo by Kristal White

Penny's Beer Garden, 1001 FM 646, opened August 16. The tap room and urban farm is located in Dickinson and will have a grand opening for its Farmers Market August 24 from 9 a.m. to 1 p.m.. Owners Kristal and James White named the business after their pup, Penny. Proponents of local and small businesses, they hope to bring the community together for libations, fresh produce and family playtime, which includes children and fur babies. The bar at Penny's Beer Garden has a rustic feel.
Photo by Matthew Griffiths
There is a fenced in area with a playground for the wee ones to slide and scramble and get away from their tablets. Parents can sit feet away at the picnic tables and enjoy a glass of wine from Haak Vineyards out of Santa Fe or Duo Winery & Cider Co., owned by Craig and Raquel Jarmosco. Duo Winery opened in 2016 and its wines and ciders can be found at local restaurants plus H-E-B grocery stores. There are plenty of local beers from well-known craft breweries like Saint Arnold's and Karbach, but also producers like BakFish Brewing Co. with its All Y'all Golden Ale or Southern Star with its cheeky Hecho En Conroe Mexican Lager.

There's also a tap room inside a quaint, wooden cottage and the interior has more of a farmhouse style which is a refreshing change from the industrial-inspired tap rooms that have become a trend. 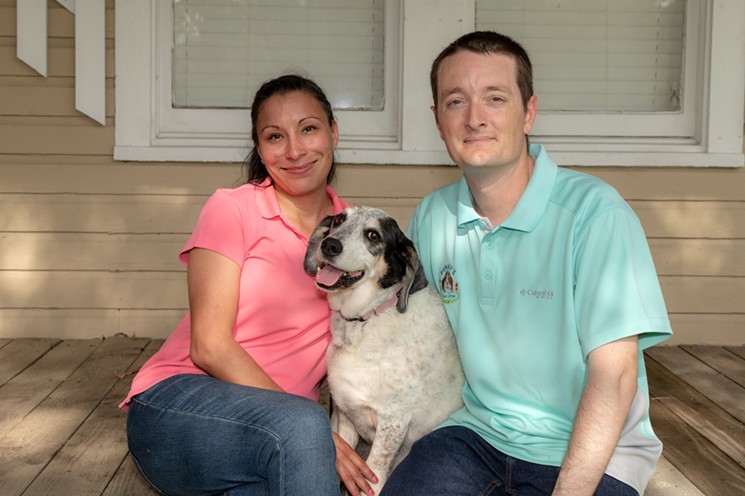 Kristal and James White with the business's furry namesake, Penny.
Photo by Matthew Griffiths
Kristal White's experience as a zookeeper and professional relationships with conservation organizations and animal shelters has inspired a local business that will have animal adoption fairs and educational workshops about eco-friendly ideas such as rain barrels. The Farmers Market will provide produce and whatever farm-fresh eggs they have available, plus will also host local vendors with crafts, honey and other food items. Duo Winery and Cider Co. is just north of Dickinson.
Photo by Whiteline Media
Dickinson was decimated by Hurricane Harvey, with its main drag looking like something out of a war-torn country in the days and months following. It is a wonderful thing to see small businesses opening again, reflecting the resilience of its community. Make a drive with your family and friends for a pleasant day of fellowship, fun and a local pour or two.

Penny Quarter, 1424 Westheimer, opened August 12. The cafe and bar from duo Bobby Heugel and Justin Yu (Better Luck tomorrow, Squable) will be open daily serving coffee and espresso until 3 p.m. and wine, beer and cocktails all day. The new spot takes over the former Etro nightclub space, next to Heugel's Anvil Bar and Refuge. The interior has been transformed into a two story bar with contemporary seating and fixtures with skylights allowing natural light to brighten the space.

A menu seems to still be in the works according to its website, but Yelpers report that there are pastries and charcuterie boards available for the time being.

Green Earth Juicery and Cafe, 2400 N. Shepherd, opened August 1. The family-owned shop sells organic smoothies, cold-pressed juices, veggie bowls, flax seed wraps, sandwiches and more healthy goodness. There are some tables for sitting inside or shoppers at the adjacent H-E-B can grab a treat or two to go.

Pepper Lunch, 9393 Bellaire Boulevard, began its soft opening August 10. The Japanese DIY Teppan was founded in Japan in 1994 and has expanded to more than 350 stores globally. With its patented electromagnetic cookers, diners can "Sizzle It Your Way" table side. The best sellers are the beef dishes like Beef Pepper Rice and Pepper Beef, but there are chicken, salmon, seafood and vegetable choices as well.

Some regulars prefer the butter sauce, but curry and teriyaki are available, too. There's a teppan pasta for fusion fanatics.

Shack A Bun, 990 Rayford, opened August 7 in Spring. The small Chicago-style eatery offers Vienna Beef hot dogs and Certified Angus for its Italian beef sandwiches. Former Chicagoans are giving it the thumbs up for authenticity, so if you're missing the dogs with sport peppers, relish, mustard, celery salt, tomato and onion, the guys at Shack A Bun will help you out. Oh, and a pickle spear. Just don't ask for ketchup, unless you are under 18. The Classic Dog starts at $4.99 while the different varieties like the Chicago Dog or Coney Island Dog are $5.99 which includes a side of french fries. The Italian sandwiches range from $6.99 to $7.99 and include fries also. Salads choices include a Greek, a pecan cranberry and a Caesar. Mac and Cheese can be a side or a meal with choices like beef, grilled chicken and sausage as add-ons.

The hot dog joint is open from 11 a.m. to 8 p.m., Monday through Saturday. Delivery is available through Door Dash and UberEats. There are house-baked fudge pies and cookies, too. 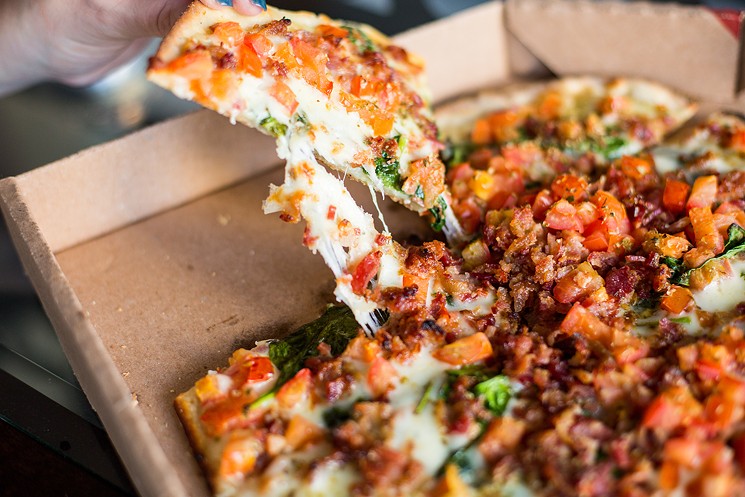 The cheese doth please at i Fratelli.
Photo by Merissa deFalcis
i Fratelli Pizza, 11300 Katy Freeway, opened August 3. The carry-out and delivery pizza chain was founded in Irving, Texas by brothers, George, David, Mike and Darrell Cole in 1987. There are a number of locations, primarily in the Dallas/Fort Worth metroplex, plus two stores in Austin. The Spring Branch location makes the first in the Houston area and boy, are Dallas transplants happy about this on social media.

The oblong pizzas are sold in medium (14") and large (16") and are sliced into 16 pieces, perfect for snacking or feeding a large group. The pizzas are thin crust and can be ordered extra crispy or even extra-extra crispy. The plain cheese pizzas start at $11.35 for a medium and $12.25 for a large, with toppings at an additional cost. There are also signature pizzas like the Carne Classico topped with pepperoni, Italian Sausage, meatball, Canadian bacon and hamburger. For a little lighter pie, there's the Staff Special with grilled chicken, artichoke hearts and roma tomato. Signature pizzas run from $13.85 to $19.75.

Callie and Bruce Redden are ready to deliver i Fratelli pizza to Houston.
Photo by Chuck Ballard
The menu also included breadsticks, fudge brownies, cookies and salads with scratch-made dressings. I Fratelli also does large salad and pizza orders for parties and workplace meetings.Gluten-free crust is available for an additional four dollars.

B.B. Lemon, 4319 Montrose, is launching it weekend brunch this Saturday, August 24. The brunch service will be every Saturday and Sunday from 11 a.m. to 3 p.m. and will feature dishes like Banana Pudding French Toast ($12) and Crawfish Hash ($19), a dish with poached eggs and blackened crawfish hollandaise. For folks wanting a traditional breakfast, there's the All American ($9) with two eggs any style, bacon or sausage, hash browns and rye toast. With a mimosa in hand and a table on the awesome patio, guests can stretch out the weekend happiness.

B.B. Lemon Montrose is also featuring a happy hour that it calls, "Lemon Hour", Monday through Friday, 3 p.m. to 6 p.m. There will be $8 craft cocktails, $4 beers and $2 off all wines by the glass. There will be eight different small plates on offer including Frito Pie ($6), chicken fried pickle spears ($5) and root beer-braised pulled pork sliders ($7). What differentiates this happy hour from most is not only the name, but the awesome fact that it offers the Lemon Hour pricing throughout the restaurant, bar and patio. Can I get an amen? 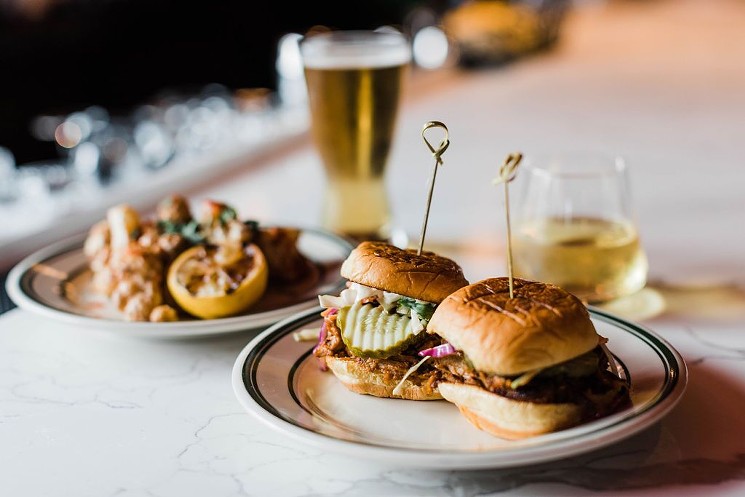 They have also added an Industry night on Monday from 8:30 p.m. to close. Employees in the hospitality and restaurant professions can enjoy 1/2 price beers and $6 burgers. Owner Benjamin Berg's favorite tipple, Jameson, will be on special at half-price as well.

Banh Mi Guys, 9228 Cypress Creek Parkway, is no more. The location is still a banh mi joint serving Vietnamese favorites and boba tea, but it has a new owner and is now Hannah's Banh Mi. That's all we know for now.
KEEP THE HOUSTON PRESS FREE... Since we started the Houston Press, it has been defined as the free, independent voice of Houston, and we'd like to keep it that way. With local media under siege, it's more important than ever for us to rally support behind funding our local journalism. You can help by participating in our "I Support" program, allowing us to keep offering readers access to our incisive coverage of local news, food and culture with no paywalls.
Make a one-time donation today for as little as $1.