Say cheese! Photo by Lorretta Ruggiero
This year, our Christmas looked a little different. With Christmas 2020, COVID vaccines were not yet available and the holiday surge was a deadly one. This Christmas found us facing yet another surge due to a fairly low vaccination rate coupled with the Omicron variant and its multitude of mutations. Families were longing to "Have a Merry Little Christmas" but for some, the fates did not allow. And some of us had to muddle through somehow.

My own family has been fortunate, for the most part, but this past Christmas Eve our tradition of getting together with certain family members was squashed by concerns over elderly loved ones and the COVID infection rate among their friends. We respected the decision of these family members but that left us with no B plan. We felt like the family in A Christmas Story. The Bumpus' dogs had eaten our turkey, metaphorically. 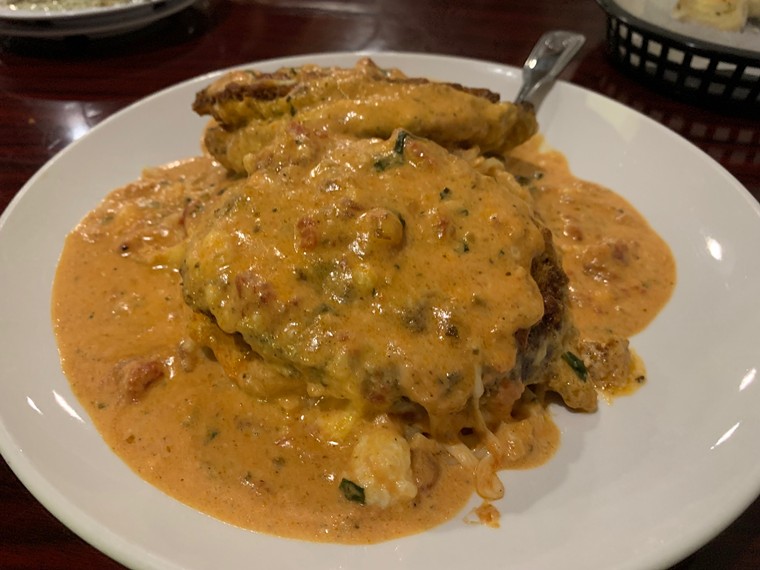 The Chicken Milanese also has eggplant.
Photo by Lorretta Ruggiero
We didn't go the Chinese restaurant route, however. Being married to an Italian-American, Christmas Eve usually means I am cooking stuffed shells or manicotti or manigottz, in their dialect. So, we decided to stick with Italian cuisine and try a place just three minutes from our house.

I am ashamed to say that Trattoria Pizza and Pasta opened two years ago at the front of our subdivision and we had yet to try it. I had even written about it for the Openings and Closings column in the Houston Press. It's set in a strip center between Karma Kolache and Yummie, two other places that I have written about and actually visited. 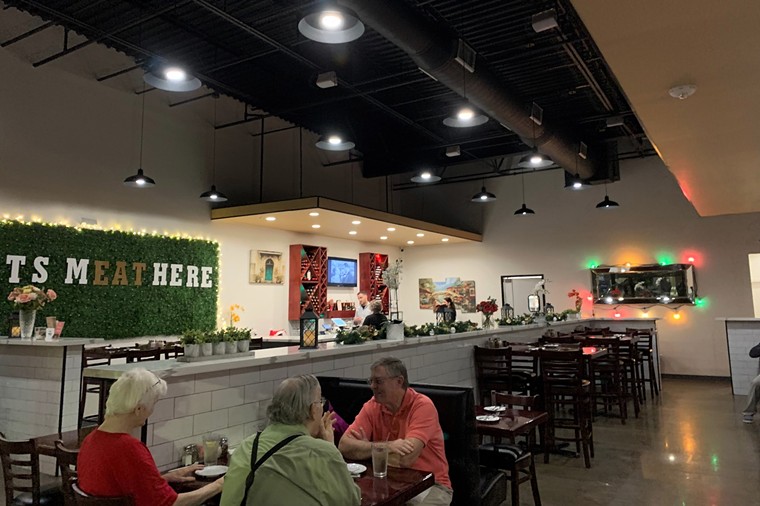 The restaurant's interior is cozy.
Photo by Lorretta Ruggiero
I am not sure why we haven't visited it over these past two years. I am not a food snob. I don't look down my nose at people who enjoy Olive Garden. In my younger days, the Olive Garden breadsticks and unlimited salad were a good meal break between bartending doubles. And I don't expect a simple strip center to supply me with mind-blowing authentic Italian cuisine, either. There are places in Houston in which to get authentic Tuscan, Roman or Pugliese cuisine. Sometimes, though, you just want to take the family out for some old school red sauce and baked pasta teeming with cheese.

And that's the situation we found ourselves on our first Christmas Eve without my husband's family. We didn't want to venture out far so we decided Trattoria Pizza and Pasta would be our Christmas Eve meal. My husband made me promise that I wouldn't complain if the food was subpar and I agreed. I would not do any whining about Christmas Eve being ruined, even if it was. That's alotta calamari!
Photo by Lorretta Ruggiero
The interior of Trattoria is a refreshing surprise compared to its strip center setting. There's a small bar to the left, some standard wood tables, a few high-tops and a wall of booths. We were sat at a hybrid, a booth on one side, two chairs on the other.

There was a family of eight decked out in Christmas finery and a smattering of other tables, most with elderly couples. I had phoned earlier to check on the BYOB status. The restaurant only recently began serving beer and wine but it still allows guests to bring their own vino. I was told over the phone that the corkage fee was $15 - a bit high for the 'burbs but not unusual for most in-town places.

Our server approached and we told her that we had a bottle of wine. A look of panic came over her face. She informed us that she was new and that she believed there was a $15 fee. We said that we were aware of that and then she disappeared to get glasses.  Another waiter arrived, wearing a festive Christmas tree hat, and asked us if we knew about the corkage fee. We said that we did and he replied that he hoped we had a good time. As we were perusing the menus, a manager came over and again asked if we knew that the cork fee was $15 and we replied that yes, we were okay with it. Unfortunately, no one had yet to provide a corkscrew. We don't run marathons but we do like to carb up.
Photo by Lorretta Ruggiero
Eventually, our wine was opened and my son and daughter received their soft drinks. We ordered fried calamari ($9.95) and fried cheese ($7.95) to start. We wanted to have a leisurely meal so we waited to place our dinner orders. Our smiling server then brought us a big basket of rolls. The rolls were soft and buttery and even better when dipped in the herb-filled olive oil that accompanied them. As we relaxed, Christmas music was playing softly in the background and It's a Wonderful Life was playing on the television above the bar. So far, so good for our Christmas Eve.

The appetizers arrived and we were impressed. The fried cheese was not an order of pre-frozen sticks but instead, five large slices of fresh mozzarella with a light breadcrumb coating. The calamari was a bounteous serving of lightly-battered rings and they were perfectly fried. The marinara that was served with the appetizers was on the thin side, which personally, I prefer. It also wasn't overpowered by garlic and herbs. Instead, it tasted mostly of tomato, a nice condiment for the fried apps. This version beats the frozen fried cheese hands-down.
Photo by Lorretta Ruggiero
The wine we brought from home was an inexpensive bottle, Rocca delle Macie Chianti Classico. It runs about $13 so with the $15 corkage, it ended up being on par with the restaurant's own wine list which ranged from $24 to $32. Though the selection was small, the prices reflected a very good value as far as mark-ups went.

When our entrees arrived, we were floored by the portions. We are not a family that usually orders multiple appetizers and now, we were faced with heaping plates of food. My 17-year-old son ordered a 10-inch pizza ($7.95 plus $2 per topping), manicotti ($10.95) and a side Caesar salad ($1.99). He runs track and cross country so I figured he could handle it. It was a little overboard but we had leftovers for later. 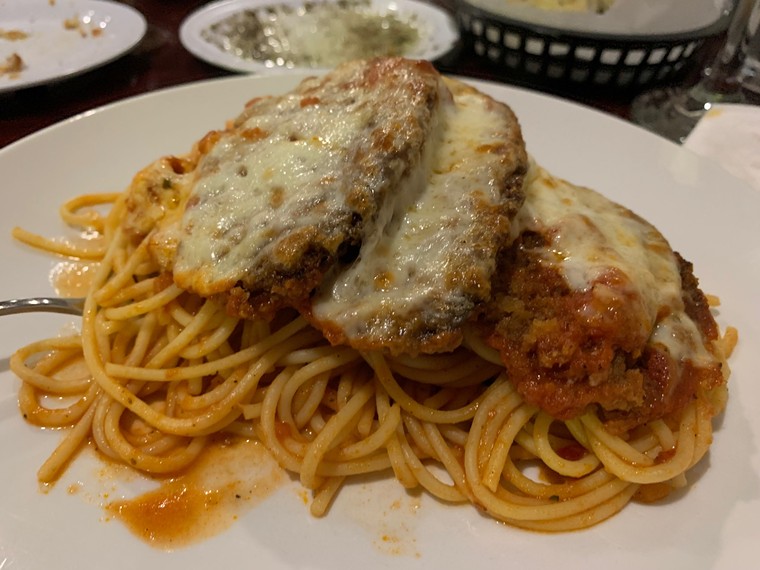 Not quite as good as my mother-in-law's eggplant parm.
Photo by Lorretta Ruggiero
The manicotti was an explosion of cheese and my son really liked it because, well, he likes cheese. He is no teenage gourmand but I took his word for it. My eggplant Parmesan ($14.95) was three big slices on top of a mound of spaghetti. I liked the breading but the eggplant was a little overcooked and the vegetable itself got lost in the crispy coating. The spaghetti was lightly sauced, which was a good thing considering all the fried food we were eating.

My husband had the Tortellini alla Vodka ($13.95) which was cheese-filled tortellini in a creamy tomato sauce. He enjoyed the simplicity of it and it was equal to my own vodka sauce, a pretty easy dish to make. My daughter's Chicken Milanese ($16.95) was the best dish and an interesting one, too. She's a big fan of chicken cutlets which is why she ordered the dish. However, the chicken cutlets were topped with eggplant cutlets  as well, covered by a tomato-cream sauce. The eggplant and chicken were less crispy than mine and far more tender. A pizza to take home.
Photo by Lorretta Ruggiero
After bread and starters, our stomachs were fit to burst and we could only finish half our meals. We had to convince our server that we enjoyed our food but that it was more than we could eat in one seating. The pizza itself was untouched during dinner but reappeared as breakfast the next day. The crust was on the chewy side but the pepperoni and beef toppings were good quality and the tomato sauce had just a hint of oregano.

As we left, more families were arriving and we felt full of Christmas spirit despite the break in our annual tradition. We were also full of good, solid Italian-American food. No truffles, no acorn-fed pork; just a nice family restaurant with home cooking and decent prices. I wouldn't call it a destination restaurant but it's definitely a nice option for the neighborhood or anyone roaming the Willowbrook area looking for an Italian restaurant that is not a chain.

And it's only three minutes from my house.

Trattoria Pizza and Pasta
10211 Cypresswood
832-756-2829
trattoriapizzapasta.com
KEEP THE HOUSTON PRESS FREE... Since we started the Houston Press, it has been defined as the free, independent voice of Houston, and we'd like to keep it that way. With local media under siege, it's more important than ever for us to rally support behind funding our local journalism. You can help by participating in our "I Support" program, allowing us to keep offering readers access to our incisive coverage of local news, food and culture with no paywalls.
Make a one-time donation today for as little as $1.