According to the Journal of the American Medical Association, Americans over 30 drank alcohol 14 percent more often this challenging year than in 2019. JAMA’s report on drinking during the COVID pandemic noted a 54 percent spike in national sales of alcohol one week late in March versus sales from the same week the year before. Shortly thereafter, the World Health Organization was compelled to warn how drinking during lockdown could amplify health concerns.

That was the beginning of the year, so here near the merciful end of it, during the season of spiked egg nogs and mulled wines, there may be cause for renewed concern. Weirdly enough, the same year that drove many to drink also was the year many dedicated drinkers scaled back or went completely sober. A recent Salon article reported how drinkers across the globe reassessed alcohol’s role in their lives during lockdown. With bars shuttered and parties on hold, the dearth of social drinking opportunities actually helped some better manage their drinking.

Even in the best of times, the holidays can prove challenging to those who have shelved the booze. Add an ongoing health crisis to the mix of usual holiday stresses and the prospect of falling from the wagon is harrowing. Fortunately, there are good non-alcoholic drink options for those fighting the urge. A trip to Spec’s or Total Wine & More reveals everything from zero proof whiskey to NA cabernet. Today, we’re focusing on non-alcoholic beer, including some new craft beer offerings and some surprisingly reliable choices. If you’re missing the taste of beer or just the comfort of ho-ho-holding a drink during the yuletide, this handpicked six-pack might help.

An NA stout for the winter months
Photo by Marissa Sendejas

A good non-alcoholic stout is like Bigfoot or that dino thing in Loch Ness, all things that probably have never existed but all things we’d find especially cool if they were ever located. Of the three, it seemed a palatable alcohol-free stout was the most elusive, but Partake Brewing may discovered something remarkable here. The Canadian brewery was founded in 2017 by brewer Ted Fleming, a craft beer lover whose Crohn’s Disease forced him to sideline alcohol. The brews come in several styles including blonde (also very tasty), pale, red, IPA and stout. They’re brewed via a vegan process and are lo-cal, between 10 and 30 calories a can. Holiday time is the best time to quaff a stout and Partake is easily the best of the ones we've sampled and allows abstinent Guinness and Old Rasputin fans to pour a pint of chestnut-colored goodness. 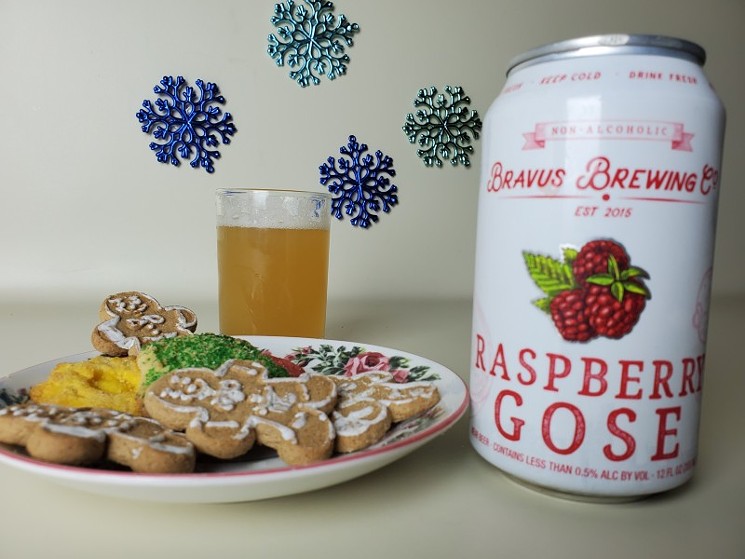 California's Bravus Brewing claims it is the country’s first non-alcoholic craft beer brewery and it certainly is serving the styles we’ve come to expect from our favorite craft brew establishments, including this gose. The style leans hard on sour and salty flavors and has been popular with craft beer snobs the past few years, so any straight-edge drinker who once cherished an intoxicating gose will appreciate these familiar tastes. This one’s infused with raspberry notes and crisp carbonation, so it’ll pair well with gingerbread men or even that fruit cake in a tin grandma sent by way of Amazon.

Giggle if you will, but Texas Select is the liquified, malty, alcohol-dry embodiment of that adage about familiarity breeding contempt. The lager is America’s oldest NA brew, founded in the late 1970s, right here in the state which adorns its otherwise non-descript label. It’s been around long enough to become a staple, so it’s been the butt of beer jokes and won’t be described in this article by its citrus notes or IBUs. But, it has the welcomed and unmistakable taste of a beer, gosh darn it, something not all NA brews – even those which pass themselves off as more hifalutin – can boast. A Texas Select is a great swap out for domestics like PBR, Bud Light and that other Texas staple beer, Lone Star. For fans of those brews, Texas Select is barely a step down in alcohol content and is possibly a better choice taste and price-wise.

Santa Clausthaler rolled into stores in 2020
Photo by Marissa Sendejas

German brewer Clausthaler pioneered NA beer in the 1970s, employing a technique dubbed “controlled fermentation” which fellow brewers now use to churn out solid alcohol-free brews. Because they led the NA charge, their beers have been lauded everywhere from the World Beer Awards to the backyard barbecues of teetotalers. Since holiday brews are all the rage these days, the brewery created Santa Clausthaler for 2020 and they fill the niche nicely. The beer pours an appealing copper color and hints of cinnamon, cranberry and citrus are detected. Because it’s a bit thin and flavored the way it is, it comes off more as a cider than a beer but it’s still a good replacement for Shiner Cheer or some other Christmas ale. And, the play on the brewery’s name conveniently allows for the man of the hour to appear in his jolly glory right there on the label.

One of the biggest names in beer makes one of the best alcohol-free brews. You get a couple of nice things from this particular green-tinted bottle, but the best is the skunkiness beer fans have come to expect from the Dutch import. It’s not as prominent as it might be in its original form, but it’s there and it’s a small and welcomed wonder on a reformed drinker’s palate. The beer also has a trusty mouthfeel, that familiar sensation of suds through the teeth and past the gums that can be tough to duplicate in alcohol-free beers. Additionally, each bottle is only 69 calories, less than a slice of bread and far more enjoyable. And, this one rates high on the beer belch test. There’s no discernable difference between a Heineken 0.0 beer belch and one from the bona fide version. That’s worth extra points.

H0.0 also doubles nicely as a Mexican brew, something you can dress to mimic a Corona or Modelo, beers that are good for chores like stringing Christmas lights in Houston’s tropical holiday climates.

The state’s first non-alcoholic IPA comes from our own backyard and it’s a revelation. Boasting hops that craft beer lovers crave, Karbach’s Free & Easy is a robust craft brew by any measure, alcohol be damned. It weighs in at 35 IBU, the same bitterness found in a Sierra Nevada Hazy Little Thing and only a couple dozen ticks off the hops level found in a Bell’s Two Hearted Ale, regularly considered one of the best beers in America. Free & Easy was unveiled by the Houston brewery in the fall and it’s currently earned a 3.6 of 5 rating by Untappd’s beer diehards. Is it the best non-alcoholic beer available today? Maybe. Everything about it works, from its golden hue to its frothy head to its notes of grapefruit and orange zest. But, mostly, it’s those hops, which gallop across the tongue like a herd of majestic horses corralled from the wild and returned to a warm and loving stable.
KEEP THE HOUSTON PRESS FREE... Since we started the Houston Press, it has been defined as the free, independent voice of Houston, and we'd like to keep it that way. With local media under siege, it's more important than ever for us to rally support behind funding our local journalism. You can help by participating in our "I Support" program, allowing us to keep offering readers access to our incisive coverage of local news, food and culture with no paywalls.
Make a one-time donation today for as little as $1.