Sugar Land gets the amore. Photo by Kirsten Gilliam
click to enlarge

Sugar Land gets the amore.
Photo by Kirsten Gilliam

B.B. Italia Bistro  & Bar, 16250 City Walk Drive, is expected to open this spring in Sugar Land Town Square. The Italian restaurant from Berg Hospitality Group first opened in 2019 in the space formerly occupied by Carmelo's Cucina Italiana. B.B. Italia closed temporarily in February 2021, as we reported here in the Houston Press. Owner Benjamin Berg decided to operate the Italian American concept as a ghost kitchen while scouting out a new location. Now, the new location will be south of Houston in the Sugar Land area, a suburban town that is seeing a boom in development.

The new B.B. Italia will offer 6,770 square feet of space with an outdoor patio. The fare is elevated Italian comfort food with items like whipped ricotta, chicken Parmigiana, house-made pastas and New York-style pizzas. Its famous 20 Layer Lasagna will also be on the menu.

It will join an eclectic mix of retail and dining businesses and will be located across from the Department of Wonder, a groundbreaking entertainment experience that will kick off the changes to that particular part of Sugar Land Town Square. The reimagining of the mixed-use development is being undertaken by its co-management company, Rebees, based out of Dallas. Plans are underway for upgrades to the storefronts and revamped landscaping, which will increase the walkability of the area.

Benjamin Berg is expanding his Texas bootprint.
Photo by Berg Hospitality
The pedestrian-friendly aspect was part of the draw for Berg. He said, " This bustling mixed-use development is a great fit for us, offering great walkability, retail, entertainment and events that add to the experience and ambiance our guests want before or after a meal."

Chris Davies takes on the executive chef role at Pastore.
Photo by Claudia Casbarian
Pastore, 1180 Dunlavy, is shooting to open in June or July 2022 at Regent Square. In the meantime, its parent company, Underbelly Hospitality, has announced that the upcoming Italian concept will have Chris Davies as its executive chef. The Portland-born chef was raised in Egypt and has been cooking for more than 15 years. Most recently, he served as chef de cuisine at Uchi Houston.

While Pastore was inspired by owner/chef Chris Shepherd's One Fifth Red Sauce concept, the menu will be very different with Davies at the kitchen helm. That's all we know for now.

Anyone in need of a restaurant?
Photo by Julie Soefer
Underbelly Hospitality also announced that the plans for Shepherd's Foo Fighters-inspired bar, Everlong, have been scrapped. It was supposed to open in the space which previously held another of its restaurants, UB Preserv, which closed in December 2021. In November 2021, we reported a number of Underbelly Hospitality changes, some of which have come to fruition, such as the opening of Underbelly Burger and Wild Oats at Houston Farmer's Market. Other switches included the shuttering of the One Fifth Red Sauce concept which was replaced by Georgia James Steakhouse, which is using the space as its temporary home while the buildout of Georgia James' future home at Regent Square is completed. It is expected to open in May 2022.

Speaking of Regent Square, with the nixing of the Everlong idea, Underbelly Hospitality has decided to focus on the upstairs lounge at the new location for Georgia James. Its working name is Georgia's Parlor but don't quote us on that because at Underbelly Hospitality, things often change. We need a Venn diagram to keep up.

As for the space at 1609 Westheimer, Todd Mason of MLB Capital Partners LLC, which co-owns Underbelly Hospitality with Shepherd, is looking for someone to take over the lease for the space which ends in November. It's a turn-key restaurant set up with tables, chairs and equipment, ready for anyone who is willing to take over the hallowed space.

Downtown wants people back in its streets.
Photo by Finn Hall
Finn Hall, 712 Main, is welcoming back the Downtown workforce with the district’s largest outdoor patio with seating for 75 guests. The al fresco dining area was designed by SWA and spans half of the building’s Main Street block. The 20,000 square-foot food hall is located on the ground level of the Jones on Main building which is considered one of the finest Art Deco buildings in the United States.

The 75-seat patio is part of the City’s "More Space: Main Street" program. It allows Downtown restaurants to expand their outdoor dining space by closing select blocks on Main Street to automobiles. Finn Hall has been recently hosting events like its All Access Art Markets, Live Music Lunches, Jazz Nights and food pop-ups. With the new patio, there will be even more live music and events.

Hunain Dada, Senior Director, Portfolio Management with Lionstone Investments said in a press release, "We are proud to officially unveil our patio and fully re-open Finn Hall as the Houston Rodeo launches and employees return to Downtown."

Island Fin Poke Katy celebrates its new management.
Photo by Ann Nguyen
Island Fin Poke, 9910 Gaston, had a grand reopening celebration and dragon dance February 20. The Katy poke restaurant is now under new management with franchisee Ann Nguyen taking the reins. The brand was established in 2016 with locations spread across 14 states. There are two in the Houston area including the Katy store and one in Spring. Two more locations are planned for The Woodlands.

The restaurant offers Hawaiian bowls that start with a base of rice, brown rice or spring mix. Guests can add proteins of their choice with options such as Ahi tuna, spicy tuna, salmon, tofu, octopus, chicken and Spam. Mix-ins include edamame, corn, sweet onions,, jalapenos or its signature OG Veggies, a blend of marinated sweet onions and jalapenos.

Dole soft serves are available for an after poke treat.
Photo by Ann Nguyen
The 25 different toppings offer customers a chance to personalize their bowl with chili oil, crispy onions, pickled ginger, wasabi peas, mango, coconut and many more ingredients.

The Katy location offers free samples of the Dole soft serve to every customer and weekly specials are listed on its Facebook page.

Seltzerland, 12000 Almeda, will pop up Match 12 at Wildcat Golf Club. The nationally traveling hard seltzer fest has sold out previously in 25 cities across the United States since its launch in August 2020. The one day event will offer samples, with over 100 flavors, from brands such as White Claw, Mike's Hard Lemonade, Vizzy, Topo Chico Hard Seltzer, Playamar and Sparkling Ice Spiked.

General Admission begins at $35, VIP tickets start at $55 and they can be purchased on its website.

Tony Liquor Store, 802 FM 2234, closed February 26 in Stafford, according to a post made by its owner on the  Chow Down in Chinatown Facebook page. Bobby P. Gian said that the landlord refused to negotiate a new lease agreement when the previous lease expired. According to the post, there are no plans to reopen or relocate.

Twisted Sugar, 4747 Research Forest, opened in The Woodlands February 4. The Utah-based brand was founded in 2015 and offers a variety of cookies, sodas, ice cream sandwiches and ice cream smoothies.

Its Signature cookies start at $1.85 each and include Oatmeal Chocolate Chip, Lemon Sugar, Peanut Butter and its Twisted Sugar. There are Indulgences flavors like Banana Cream, Sprinkles, Salted Caramel and Lemon raspberry. Gluten-free cookies are available as well.

We want to hang out with Nana.

Locatelli's, 12904 Fry, closed in January but customers were wondering if it was permanent. In a Facebook post February 24, the owners said that they were advised not to make any public statements but that they had indeed terminated the lease for that location and looked forward to serving customers at its original location at 13215 Grant in Cypress.

The pizzeria and restaurant is family-owned and offers a variety of starters like Toasted Ravioli, Telli Cheese Fries and Fried Cheese. There are also sandwiches, salads, pastas and pizza.

Brio Italian Grille, 1201 Lake Woodlands, closed the weekend of February 19, according to Community Impact. It also reported that a spokesperson confirmed the closure and that another Italian concept, North Italia, would take its place. 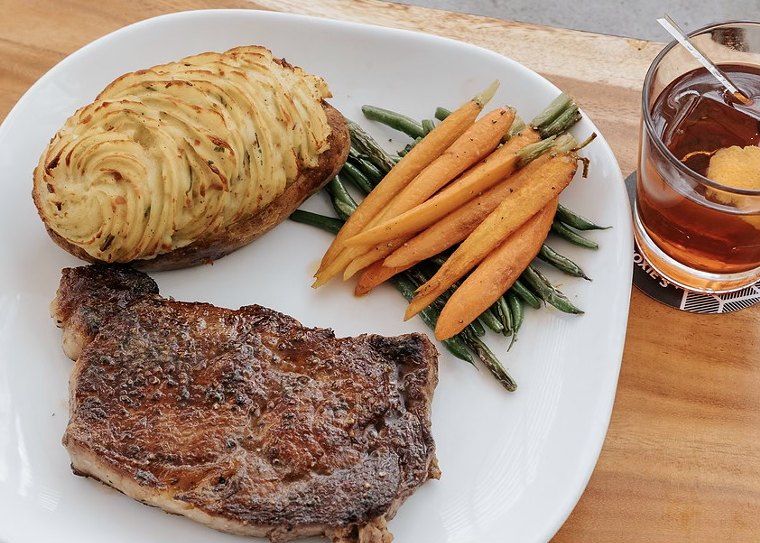 Cowpokes of all kinds can enjoy a Rodeo Ribeye Dinner at Moxie's for a limited time.
Photo by Moxie's Houston
Moxie's Houston, 5000 Westheimer, is celebrating the 90th anniversary of the Houston Livestock Show and Rodeo with a custom rodeo menu that includes a three-course Ribeye Dinner and cocktails like the Spicy Cowboy Margarita. Guests can belly up to the bar and order shots like The Chuckwagon or the Rodeo Queen.

Other Southern rodeo favorites from this Canadian import include Baby back Ribs, The Loaded Cheeseburger with bacon and bbq sauce and the Southern Fried Crispy Chicken Sandwich.

The special Rodeo menu is available through March 20. Then it will mosey on out with the Houston Livestock Show and Rodeo.

Barcelona Wine Bar is looking to open a location in Houston. A tipster told us that the spot would be 1731 Westheimer, however, that was not confirmed. A spokesperson simply said in an email that the company loves the Montrose.

The Butcher's Burger, 401 Franklin, closed late February
Eighteen36, 2221 W. Alabama, closed February 7
Salt & Time, 401 Franklin, closed late February
KEEP THE HOUSTON PRESS FREE... Since we started the Houston Press, it has been defined as the free, independent voice of Houston, and we'd like to keep it that way. With local media under siege, it's more important than ever for us to rally support behind funding our local journalism. You can help by participating in our "I Support" program, allowing us to keep offering readers access to our incisive coverage of local news, food and culture with no paywalls.
Make a one-time donation today for as little as $1.