B.B. Italia Kitchen and Bar, 14795 Memorial, opened May 2, along with B.B. Pizza To Go, which is located in the restaurant as well. The new restaurant brings a fresh take on Italian food using high quality ingredients, which is no surprise coming from the Berg Hospitality Group. Restaurateur Benjamin Berg and his brother, executive chef and partner Daniel Berg, were inspired by the great Italian-American food they grew up eating in New York City. Typical dishes like Sunday Ragu with Italian sausage and mini meatballs ($14) and eggplant Parmesan ($12) are the perfect comfort foods like Nonna used to make. There are more elevated offerings like sauteed crab fingers oreganata and Italian fried chicken with Calabrian chili ($16).  There are plenty of cocktails including a blood orange mule and Aperol spritz on tap. Sommelier Lexey Johnson has created a wine list running from $30 to $300 a bottle.The restaurant will feature a 20-seat horseshoe-shaped bar, a main dining room, a boxwood-lined outdoor patio and six semi-private and private rooms each named for a local school in the Energy Corridor. Plans for a happy hour and brunch are in the works.

The Berg brothers are doing Italian.
Photo by Jenn Duncan

B.B. Pizza To Go will serve New York-style pizza, calzones, stromboli, heros and subs, plus a number of appetizers for take out.


SOZO Sushi, 1700 Post Oak, has a new chef and you won't believe who it is. Chef Shimao Ishikawa is back. Sushi lovers in Houston were thrilled when Ishikawa opened Kukuri on Washington in August 2017. His extravagant omakase wowed diners, at least for a while. Unfortunately, Kukuri shuttered six months later amid speculation and confusion. Now, the sushi master has turned up at Sozo and is completely changing the game at this Japanese fine dining restaurant in the Galleria. With over 40 years of experience, from his apprenticeship at the age of 18 to his work at Michelin-starred Jewel Bako in New York City to his restaurant in Houston, he brings a mastery of Edomae-style sushi to his new role at Sozo. Check out the restaurant's Instagram page for eye-popping photos. Better make reservations. The word is out. Killen's bread pudding is an award winner.
Photo by Dragana Harris
Killen's Steakhouse, 1700 Research Forest, opened in The Woodlands April 26. This is the second location for Ronnie Killen's signature steakhouse, though it is being described as falling somewhere in between the Pearland location's steakhouse offerings and Killen's STQ, with its smoke-forward menu. There will still be favorites like the chicken fried steak and croissant creme brulee bread pudding, and of course, its robust aged steak program which includes USDA Prime beef and Japanese Wagyu. Co-owner and Beverage Director Deanna Killen will be leading the team at this northern outpost in the Killen empire. Pastry chef Samantha Mendoza will be part of that team. Killen's Steakhouse has traveled north.
Photo by Kimberly Park
The changes to the original building were minimal and included taking out the dark paneling and replacing the carpet. Western-themed artwork from G. Harvey decorates the walls, with oil rigs being de rigeur for The Woodlands area. The top of the line kitchen has been further enhanced with a new barbecue pit and wood-burning grill.

Killen's Steakhouse in The Woodlands will be open Monday through Thursday from 5 p.m. to 9 p.m. and Friday and Saturday from 5 p.m. to 10 p.m., with a happy hour and bar menu to come. Unlike the Pearland location, the new one is looking to serve lunch in the future. The Union Burger is topped with crispy onion rings.
Photo by Gary Wise
The Union Kitchen, 9955 Barker Cypress, is looking toward a summer opening at the Boardwalk at Towne Lake. It will be located in the former Jaxton's Grill spot with a 2,000 square foot patio facing the lake. This will make the sixth location for TUK in the Greater Houston area.  The newest restaurant will feature an open kitchen and wood-burning grill, allowing a wider variety of steak and fish dishes. Chefs James Lundy and Edward Roberts of The Union Kitchen on Washington will lead the kitchen.

Paul and Doris Miller, husband and wife owners of Gr8 Plate Hospitality, were jointly honored as the Greater Houston Restaurant Association's 2018 Restaurateur of the Year.

Common Bond's army of macarons is making its way to Springwoods Village.
Photo by Lorretta Ruggiero

Common Bond Cafe and Bakery has executed a lease at CityPlace at Springwoods Village and is expected to open in the first quarter of 2020. The popular bakery and cafe, owned by George Joseph, most recently opened its second location in the Medical Center. The upcoming cafe will join Star Cinema Grill, expected to open in June 2019 and Island Grill slated for mid-2019 in a multi-use complex that will provide dining, entertainment and hotel accommodation near the Exxon/Mobil campus and the ever-growing Grand Parkway Corridor.

Tropicales, 2132 Bissonet, will open May 5, according to the Houston Chronicle. The new coffee, cocktail and cafe hotspot will have a Latin vibe and be an oasis in the big city of Houston. It comes from David Buehrer, owner of Greenway Coffee Company, and he's brought in his Morningstar partner, Carlos Ballon as culinary director and Jill Bartolome, formerly pastry chef at Aqui and Common Bond, as general manager.

Torchy's Tacos, 351 South Loop West, celebrated its grand opening April 30, in Conroe. The taco joint serves breakfast tacos like the Migas and the Dirty Sanchez all day. There are a variety of fillings from chicken fajitas to fried avocado to Baja shrimp. The taco of the month is the Tokyo Drifter, a flour tortilla filled with teriyaki pulled pork, sweet and sour veggie slaw, fried wonton strips and sriracha mayo.

My Porch will open in Cypress.
Photo by Lorretta Ruggiero
My Porch, 10609 Grant, is coming soon. That's all we know. If you know more, let us know. Then, we will all know.

Jamba Juice, 9303 Highway 6, is opening May 10  and will celebrate with a grand opening, May 11, in Missouri City. It will be the 3rd largest Jamba Juice store in Texas and the largest in the Houston metro area.

El Paso comes to Houston by way of Louisiana.
Photo by Evelyn Chavez
El Paso Mexican Grill, 7607 Cypress Creek Parkway, opened April 17 in a stand alone building which originally housed Romano's Macaroni Grill for years. The family-owned company serves authentic Mexican and Tex-Mex dishes at numerous locations across Louisiana and one in Florida. The Willowbrook store is its first location in Texas. It has a great selection of margaritas, happy hour specials and a selection of classic Mexican desserts like sopapillas and tres leches cake made daily, in house.

Diners are enjoying its outdoor terrace, so if the weather's nice, make a drive to Willowbrook to check it out. Or, you can visit May 9 when Al Joslin, an acclaimed Elvis Tribute artist, performs at 7 p.m. The fajitas won't be the only thing sizzling.

Treebeard's, 315 Travis, will now be open Saturday from 11 a.m. to 2:30 p.m. beginning May 4. That's right. It will begin its Saturday service just in time for the Kentucky Derby. What better way to start Derby Day than some down home cooking like crispy chicken fried chicken, crawfish etouffee and bread pudding with whiskey sauce? And the prices will leave you enough dough for the $12 mint juleps you'll be guzzling later.

With its weekday only lunch hours since 1978, it was not easy for some Houstonians to enjoy its Southern comfort food and I am one of them. I love Market Square, but I am rarely there except for weekends. I for one am looking forward to the chicken vinaigrette recommended by this publication's editor who is over the moon about the expanded hours. Besides the full menu, cocktails, wine and beer, Treebeard's will offer boiled crawfish on Saturday as well. Chefs Chris Cosentino, Chris Shepherd and Ming Tsai share a laugh. Chef Jamie Bissonette is mildly amused.
Photo by Catchlight Photography
Southern Smoke Spring raised $163,000, exceeding its goal of $125,000. Chris Shepherd's Southern Smoke Foundation has distributed 1.3 million dollars since its inception in 2015, to the Multiple Sclerosis Society, Legacy Community Health, the Gulf Seafood Foundation and to food and hospitality professionals who have experienced financial and medical crises. After Hurricane Harvey, Shepherd saw the need for aid to the individuals and families who so often have no medical insurance or other means of weathering a personal storm and thus, the Southern Smoke Emergency Relief Fund was established. While the Southern Smoke Festival in the fall raises hundreds of thousands of dollars, organizers saw a way to shore up the relief fund with another Southern Smoke event and the inaugural Southern Smoke Spring was born this April. With dinners starring world class chefs, a bar takeover at UB Preserv with Dave Arnold and a City Wide Steak Night at various participating restaurants around town, the Foundation surpassed its goal. Executive Director Kathryn Lott said of the donors, participants, diners and ticket holders, " We share this success with everyone that contributed and we know that this money will go directly into the hands of those who need it." 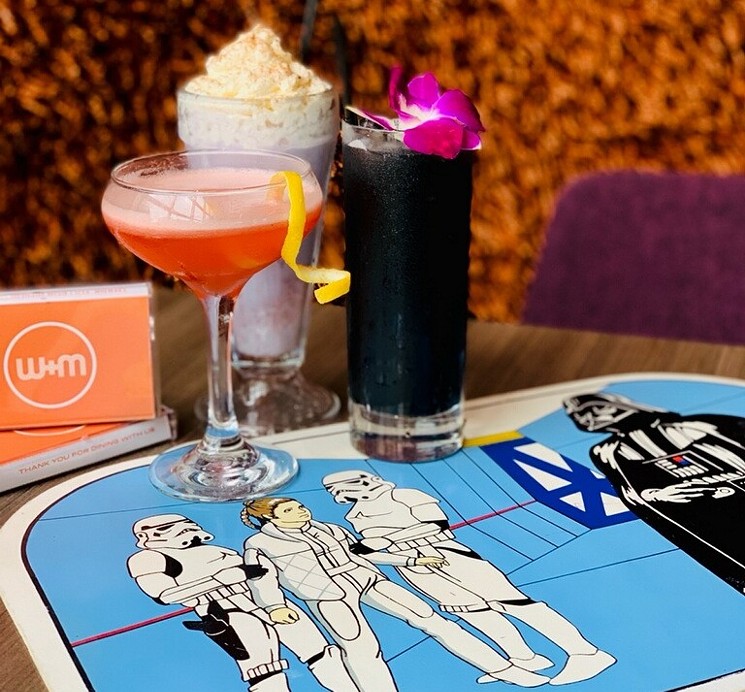 Darth Vader isn't as scary with an orchid garnish.
Photo by Isaac Johnson

Weights and Measures, 2808 Caroline, has great and downright cheap special cocktails for "May the Fourth be With You" day, May 4. Those who have no interest in the Kentucky Derby parties around town can instead nerd out at Weights and Measures with its Star Wars-inspired beverages. The Darth Vader has vodka, ramazotti rosato, lemon and, wait for it, activated charcoal. How can that not be awesome? The Princess Leia has rum, passion fruit (Han), forbidden fruit (her brother,Luke) and lemon. And finally, there's the Boba T. Fett. I am embarrassed to say that I wondered aloud about Boba Fett having a middle initial until someone pointed out that it's a play on boba tea. Anyway, it has rum, powdered taro, almond liqueur-infused tapioca and almond milk. It's topped with brown sugar whipped cream. If the creativity and playfulness of these epic science fiction concoctions isn't enough to tempt you to the Dark Side, maybe the $4 price tag will have you embracing the ways of the Sith.

Balls Out Burger, 1603 N. Durham, closed late March
Bar Victor, 4321 Montrose, closed April 20
The Counter, 4601 Washington, closed in March
Mr. Nice Pie, 712 Main, close late March
Padna's Cajun Eatery, 403 Westheimer, closed April 3
KEEP THE HOUSTON PRESS FREE... Since we started the Houston Press, it has been defined as the free, independent voice of Houston, and we'd like to keep it that way. With local media under siege, it's more important than ever for us to rally support behind funding our local journalism. You can help by participating in our "I Support" program, allowing us to keep offering readers access to our incisive coverage of local news, food and culture with no paywalls.
Make a one-time donation today for as little as $1.