Be More Pacific, 506 Yale, softly opened March 2. The first brunch service will be Sunday March 8.The Filipino restaurant began as a food truck in Austin in 2011 from founders Mark Pascual and Giovan Cuchapin. They opened a brick and mortar at 7858 Shoal Creek in Austin in 2017. Pascual and Cuchapin are Houston natives and have returned to their hometown to open the second location of Be More Pacific with locals Roveen and Jan Abante, forming RUNBMP LLC.

Be More Pacific has arrived .
Photo by Rochelle Abante
The restaurant offers traditional Filipino foods such as adobo, pancit and lumpia in a laid back atmosphere with Instagrammable walls and two karaoke rooms. There will be local craft beers, plus tropical cocktails utilizing traditional Filipino flavors like mango and calamansi. Adding to the tropical feel will be a large garage door that opens to the outdoors and lets in the warm Houston breeze.

There will be a happy hour Monday through Thursday from 3 p.m. to 7 p.m. and a reverse happy hour from 9 p.m. to 11 p.m. Friday and Saturday. Look for Ube pancakes at brunch and bar food like CHICKcharon which is a dish of fried chicken skins with spicy vinegar. There are also regular Bangus, or milkfish, specials.

Turner's is a sophisticated restaurant from Berg Hospitality.
Photo by Kirsten Gilliam
Turner's, 1800 Post Oak Boulevard, opens March 6 for dinner. The new concept from Berg Hospitality will be an exclusive dining restaurant with Classic American and Continental cuisines from Executive Chef Robert Del Grande. Del Grande and restaurateur Benjamin Berg also collaborated on the rebranding of Cafe Annie which is now The Annie Cafe and Bar.

Turner's is tribute to the bygone era of society dining, offering old world charm in a clubby atmosphere which is echoed in the textured walls, carved chandeliers, mounted animal heads and fine table linen. The menu hearkens back to a time when elegance and class were had for a pretty penny. The menu is classic as well with a raw bar that includes oysters on the half shell, chilled King crab and Maine Lobster cocktail. There is a Petrossian caviar service which offers Classic Daurenki, Royal Ossetra and Tsar Imperial Baika for the royal in you.

The monkeys will light the way at Turner's.
Photo by Kirsten Gilliam
Starters like the Land & Sea on the Half Shell will wow with its Wagyu carpaccio,  warm bone marrow and East Coast oysters with Ossetra caviar. If you're feeling a little less extravagant, there's a burger, albeit a $28 creation, called Turner's Burger which is its house blend grind, raclette cheese, heirloom tomatoes and a secret sauce. The secret must be gold flakes, we're thinking. There is also a Hot Dog Service with Texas Wagyu. Old fashioned elegance requires an old fashioned cocktail.
Photo by Kirsten Gilliam
You get what you pay for, though a few well-heeled Houston socialites and smart-suited bigwigs might blanch at a $68 Dover Sole, but we're neither well-heeled nor smart-suited, so what do we know? We do know that if you can dish out the dough for a $78 Lobster Thermador, then the elegant ambiance and dimly lit exclusiveness might be where you broker your next best deal, whether it be financial or romantic, or both.

III Forks Houston, 1201 Fannin, closed February 29. We have reached out for more information about the closing and will relay that to you as soon as we get a response. The company also operates III Forks concepts in Austin, Dallas, Chicago, Palm Beach and Jacksonville, Florida. 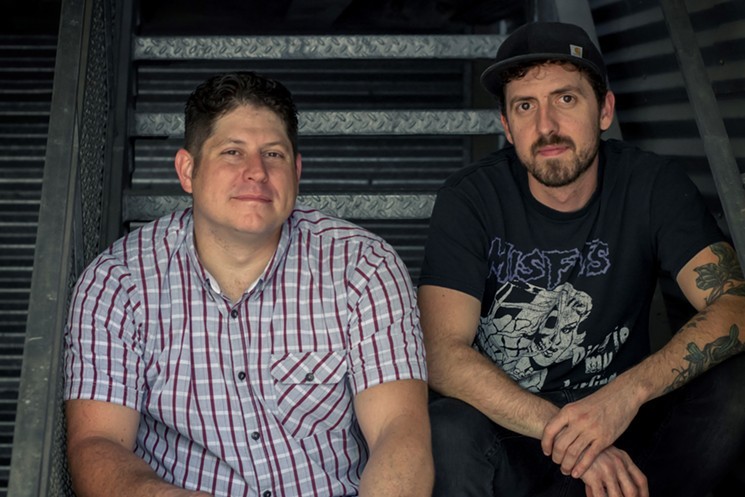 Sean Jensen, Jason Vaughan and Julia Doran (not pictured) are opening a new restaurant.
Photo by Aaron Casey
Tiny Champions, 2716 McKinney, is planned for a launch in fall 2020. The new restaurant, with a focus on fermentation, is the team effort of beverage and front of house expert Sean Jensen, pastry chef Julia Doran and chef Jason Vaughan, the same trio behind the highly acclaimed EaDo bistro Nancy's Hustle and its highly craved Nancy Cakes with whipped butter and smoked trout roe. Nancy's Hustle was named made Esquire magazine's Best Restaurants of the decade list. Decade, y'all.

Not much info was given in a press statement except that there will be naturally leavened pizza and fermented vegetable dishes all helped along by the tiny champions of flavorful fermentation. In an email, we were told that it will be "by Tiny Champions, of Tiny Champions and for Tiny Champions". There's a theme here.

And speaking of champions, Chef Vaughan is a James Beard Award semi-finalist nominee for Best Chef: Texas along with other Houston chefs,  Dawn Burrell of Kulture, Anita Jaisinghani of Pondicheri, Manabu Horiuchi of Kata Robata and Trong Nguyen of Crawfish and Noodles. And yes, Texas got its own designation this year. Take that, California.

Start spring off right with a salad from Salata.
Photo by Allison Cocker
Salata, 449 S. Loop 336 W., celebrated its grand opening February 29. This is the first location in Conroe and the 93rd for the salad chain nationwide. It's the third store for the Conroe Salad Company franchisees, Kyle Schomburg and David and Laurie Nimberger. The Conroe High School Band received a donation of 20 percent of sales from the grand opening.

The 2,880 square foot space has seating for 76, with a community table for friends and family, a lounge area and booths and tables for dining in. There is also a power aisle for to-go orders.

The healthy eating options include five salad bases, more than 50 toppings, and ten house-made, gluten-free dressings. There is also a variety of wraps and soups. There are organic teas and lemonades and the restaurant features a glycol tea tap system to keep all the teas at 34 degrees Fahrenheit.

A secret garden blooms in Midtown.
Photo by Lorretta Ruggiero
Dahlia, 2901 Fannin, bloomed February 5 in Midtown. The beautiful murals in this nightclub and bar are made for beautiful people who take beautiful Instas. If you are one of those pretty, young flowers who has not gone to seed like some of us, this is the place to be seen, demurely sipping a cocktail in a florally feminine setting. The cocktail choices include drinks like the Jessica Rabbit ($12) made with Grey Goose vodka, strawberry puree, mint, lemon juice, simple syrup  and garnished with pop rocks. Or try the Pink Dahlia ($11) with pomegranate vodka or a White Peach Blossom sangria ($8). For selfie obsessives, there's the Resting Duckface ($12) which is a frozen Deep Eddy Lemon Drop.

For high rollers and mildly successful rap artists and musicians seeking to impress, there is bottle service. Prices vary. Wildly. So, try not to be too impressive. Veuve Cliquot Yellow Label goes for $200 here.

Be pretty on the pretty patio.
Photo by Lorretta Ruggiero
For those of us without an entourage, seeking to impress our financial planner, happy hour runs from 4 p.m. to 7 p.m., Monday through Friday with $6 sangria and $9 cocktails. Flower hour (for the ladies) from 6 p.m. to 7 p.m. is even better. It offers $5 sangria, select wines and 16 ounce White Claws.

The gorgeous murals are done by French artist Sebastien "Mr. D" Boileau known for his giant mural "Preservons la Creation" at 2800 San Jacinto and the murals at Warehouse 72 depicting the faces of lovely local ladies.

Photo by Lorretta Ruggiero
Nanyue Bistro, 12331 Jones, closed in December of last year, but Tiger's Authentic Chinese Cuisine is ready to take its place. The signage is up but some renovations are still under way. We don't have any further information on its opening but we will keep an eye on it.

Nanyue Bistro opened in May 2019 and served an extensive menu of Chinese favorites and Sichuan fare. It also got pretty good reviews. Is Tiger's a new restaurant or a rebranding? We will have to wait and see.

Raising Cane's Chicken Fingers, 12627 Kirkwood, just broke ground for its first location in Stafford. This will make the 166th store for Texas and 522nd for the chain system-wide. It is slated to open in July. The Baton Rouge-founded chicken tender restaurant is known for its One Love chicken tender meals.

Chicken and waffles become Chick'nCones.
Photo by Chick'nCone.
Chick'nCone, 1919 N. Shepherd, recently opened and is celebrating with a grand opening March 6, as we reported here in the Houston Press. Well, we're reminding you again because it's today. So, if you like chicken bites in waffle cones with a choice of sauce, take yourself over there from 2 p.m. to 8 p.m. for zydeco music, wine tasting and free ice cream for the kids.

Lit Chicken, 712 Main, opened March 2 in Finn Hall. It takes over the spot which formerly housed Mala Sichuan Bistro. The new concept comes from Ross Coleman and James Haywood, formerly of Kitchen 713. Patrons will find the famous fried chicken on the menu and Yaji rotisserie. There are chicken sandwiches, chicken and dumplings (made with yam) plus a couple of salads like the Lit Super Grain Salad. Side options include Loaded Jollof Rice, Southern-braised Greens plus a Beans of the Week offering.

Master Sommelier David Keck outside of Goodnight Charlies.
Photo by Julie Soefer
David Keck has resigned from Goodnight Hospitality and is moving to Vermont. Keck was one of the founding partners of the company which operates Houston's Goodnight Charlie's, a honky-tonk music and restaurant venue plus Rosie Cannonball and Montrose Cheese and Wine. Two remaining partners Felipe Riccio and June Rodil will continue to work with owners Peter and Bailey McCarthy as they move toward opening March, another Goodnight Hospitality concept in April 2020.

In a press statement, Keck said, "After over a decade of living and working in the hospitality business in Houston, I have decided to relocate to my home state of Vermont... I couldn't be more proud of the Goodnight Hospitality endeavor and am excited for the next steps for both of us."

Goodnight Charlie's was a personal project for Keck and the team is evaluating what lies in store for the concept.

Photo by Steven Cromer
The Roastery, 5895 San Felipe, 2300 Shepherd and 3663 Washington, is offering a Texas-sized kolache made with Truth BBQ's Smoked Pork and Beef Sausage filled with Cheddar and Jalapeno wrapped in The Roastery's house-made kolache dough for $6. The special (and tasty) collaboration is available for a limited time and only at the Buffalo Heights, Heights and San Felipe locations.
KEEP THE HOUSTON PRESS FREE... Since we started the Houston Press, it has been defined as the free, independent voice of Houston, and we'd like to keep it that way. With local media under siege, it's more important than ever for us to rally support behind funding our local journalism. You can help by participating in our "I Support" program, allowing us to keep offering readers access to our incisive coverage of local news, food and culture with no paywalls.
Make a one-time donation today for as little as $1.