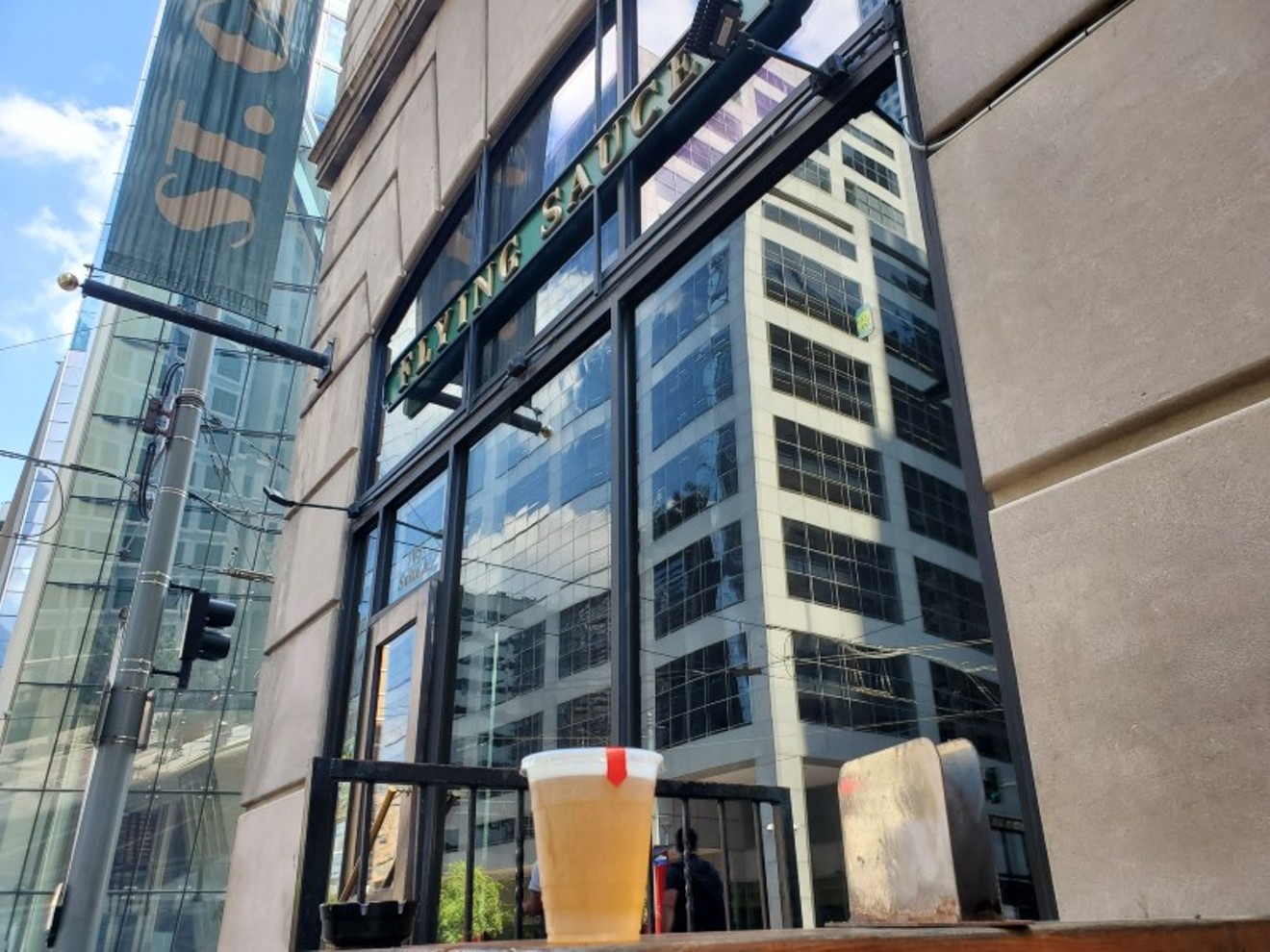 COVID-19 put lots of personal goals on hold. Some of those plans were grand and some might have seemed frivolous, but they were our goals, mountains and molehills the pandemic forced us to stop scaling. Now, months later with no foreseeable end to our changed lives in sight, being able to regain control and resume our great and small pursuits seems key to restoring some sense of what’s normal to the world.

That notion is not lost on the folks who run Flying Saucer Draught Emporium. Affectionately known as “The Saucer” by many of the patrons who frequent any of its 13 locations across the country, the craft beer establishment recently shared how members of its UFO Club can continue one of the club’s main beer objectives and wrest back a fun, pre-pandemic pursuit.

Every Saucer features plates on its walls and ceilings, each one designed to boast a UFO Club member’s achievement of drinking 200 different Saucer-served beers. Asa Hanrahan is Flying Saucer’s beer director and he said Houston boasts more than 18,000 UFO Club members. When the local Saucers in downtown Houston and Sugar Land closed in March and again in June, every UFO member’s race to 200 was stopped dead in its tracks. Hanrahan wanted them to know that the march is back on, even for those who don’t feel entirely comfortable yet drinking in house, thanks to to-go orders.

“I enjoy talking about the UFO Club, that’s really the first thing I enjoy discussing the most. When I walked into the Saucer for my very first time, all the plates on the wall were obviously attention getting, you can’t help but stop, look around and read them and want to know about them and I think it’s something that really draws a lot of attention,” he said.

Hanrahan said there are currently 3,899 plates affixed to walls and ceilings at the downtown Houston Saucer. To-go beer orders will ensure that anyone still skittish about crowds can add to their UFO Club tallies. Per usual, UFO Club drinkers can add three unique beers a day to their totals, whether they drink them at the Saucer or carry them out. 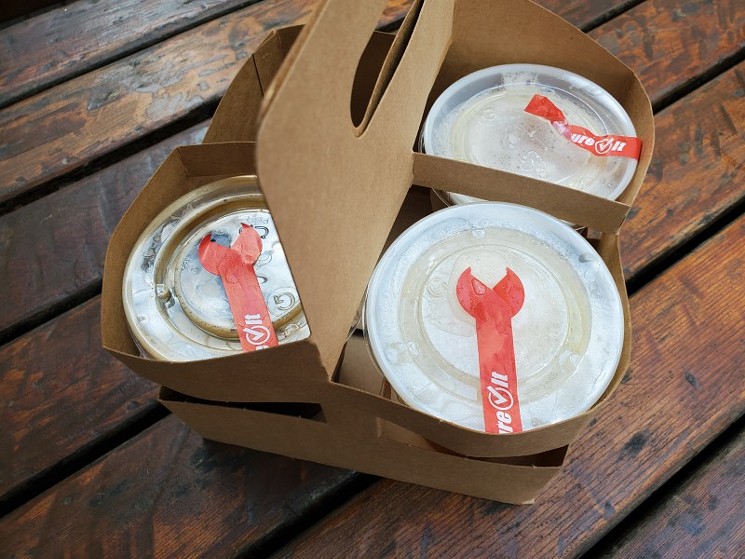 “We have an app and there’s a QR code for you, it’s on our website, and you can look at all the beers we have available right now for purchase. You’re able to get three a day and you can pay for them on our website and we’ll have them ready for you. We can bring them out to your car, you can pick them up at the store and just walk it out without having to do any kind of transaction. Those three will get counted towards your plate party.”

That’s right, a festive party ends each of these monumental beer quests, with family and friends invited for the unveiling of the member’s customized plate. In many cases, the party launches the next beer journey. Several UFO Club members have multiple plates on the beer bar’s walls. Hanrahan said the Saucer is doing all it can to safely host those celebrations.

To-go beer has been a game changer for the state’s COVID-challenged craft beer industry, Hanrahan said. Order a single draft beer, they’ll lid the cup for you and off you go. It’s one thing which has kept the Saucer’s plethora of beer taps flowing recently.

“The governor shut us down in June and the only good thing about COVID is we’re able to sell beer to go now,” he said. “We can sell it to go, so we have growlers for sale. A growler is the equivalent of four pints. We have those for every different beer on the wall, you can get any beer on the wall to go right now. Bottle beer to go, canned beers to go. We’re doing a six pack right now for Oktoberbest, that’s been a pretty successful promotion for us.” 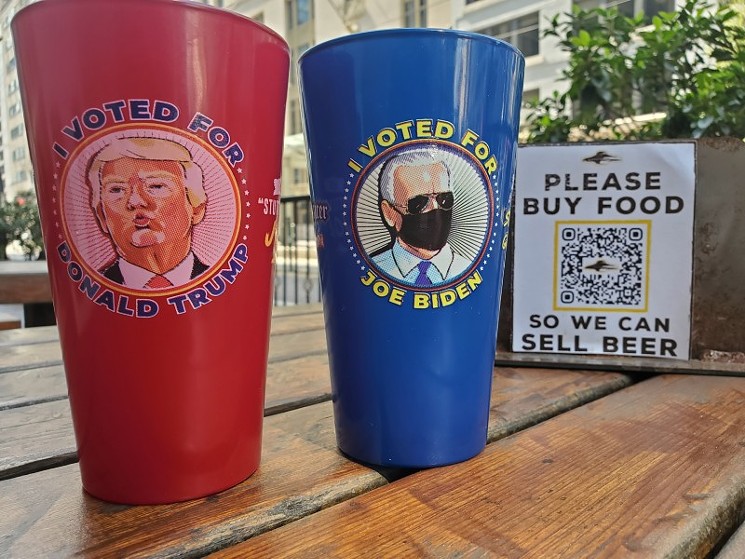 The Saucer's election year glasses are popular and once again on sale
Photo by Jesse Sendejas Jr.

“Every four years we put our presidential glasses on sale, this year it’s Biden and Trump,” Hanrahan said of the glasses, which feature likenesses of the candidates and went on sale last week. “Every (purchased) glass counts as a vote. We keep a banner up in the store and every single time we’ve done this, since 2004, the person who’s sold the most glasses in our company has won the election.”

They’re available for purchase at all Saucer locations and also on the website, where the “votes” are also being tracked. At press time, Trump was 150 glasses ahead of Biden.

The downtown Saucer is now open from 11 a.m. to 10 p.m. daily, a modified schedule since sporting events, concerts and conventions are all on hold. But Hanrahan said the Saucer has returned to its usual weekly events schedule. Every Houston beer is just $4 on Sundays and all draft beers are $4 on Mondays, making them good days to work on UFO Club plates on the cheap. The Saucer’s popular trivia night is running every Tuesday evening and Wednesdays feature flights, four different beers for $10. Thursday is wings night and Friday spotlights a $5 Duvel Happy Hour. Hanrahan said “there’s only a few (beer bars) in the country that have real Duvel on draft and to get it for $5 from 4 to 6 (p.m.) every Friday is pretty awesome.”

Hanrahan stressed the company is working hard to ensure anyone who visits for these events feels safe doing so.

“We switched from a bar license to a restaurant license so we could open back up again and we have to adhere to all the restaurant rules. I mean, for us, just speaking candidly here, we’ve never even gotten to 50 percent (indoor seating capacity) since this all started,” he said. “Our tables are six feet apart, it’s spaced out, socially distanced, our staff’s wearing masks and getting temp checks every day. We have a great patio that’s downtown for some people watching but inside feels really safe. Adding more tables isn’t something we’re into doing right now, we’re just trying to get people in safely to spend some money on some good beer.” 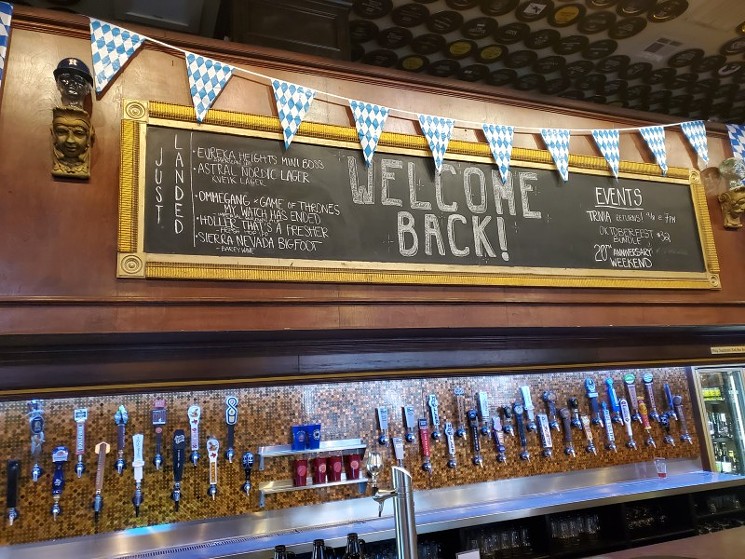 “Obviously we’re here to offer to-go stuff, but if you walked inside and saw us making sure everybody’s wearing masks when they roam around the restaurant, our staff being masked up, our tables six feet apart, sanitizer stations everywhere, you know I think you’d feel a lot more comfortable being able to sit down and enjoy a good beer,” he noted.

Hanrahan has been at work selecting beers for Saucers more than a dozen years and said “beer business needs a lot of love right now.”

“I’ve worked here for 13 years and this was the busiest store in the company, pre-COVID. You know, I work for the whole company but most of my time is spent in downtown Houston. For us to get closed down in June, the second closing – the first one, everybody got closed, but the second time, when the governor shut just bars down — it was a real kick in the face to what I do for a living and the people I care about the most, the people that work in the bar business.

“It took six weeks to get the restaurant license from the bar license and that was a very emotional day for all of us here,” he continued. “Having the place being quiet like that for so long was not okay with me. I care tremendously about this brand and about this company and the people who work for it and I care a lot about craft beer.

“Not being able to sell good beer for that long was not something I really was looking forward to. I think, if you like beer and you like the Flying Saucer you’ve got to go out and either get it to go or come inside and check it out and see how safe it is. What we’re doing to-go is pretty impressive. As long as the governor keeps letting us do that – I think it’s the least they can do right now for us, is let us keep selling beer to go – we’re willing to do what we can to get a good beer in your hand any way possible.”
KEEP THE HOUSTON PRESS FREE... Since we started the Houston Press, it has been defined as the free, independent voice of Houston, and we'd like to keep it that way. With local media under siege, it's more important than ever for us to rally support behind funding our local journalism. You can help by participating in our "I Support" program, allowing us to keep offering readers access to our incisive coverage of local news, food and culture with no paywalls.
Make a one-time donation today for as little as $1.