A seafood feast at Roma is a delicious tradition. Photo by Jeremy Parzen

Here's a look at this weekend's best culinary happenings:

The debate over whether or not Die Hard is a Christmas film still rages on more than three decades after its release. El Big Bad, the downtown tequila bar and restaurant, is going all in on the pro-Christmas side with  its Nakatomi Plaza Christmas Party, an homage to the Bruce Willis film. There is no cover charge and party goers are encouraged to wear their best 1980s Christmas attire, their ugliest holiday sweaters or John McClane tank top. There will be a costume contest, drink specials, Die Hard-themed cocktails and house-made Mexican hot chocolate. The kitchen will be open and DJ Mohawk Steve will be spinning a Die Hard-themed playlist.

This French restaurant is located close to Discovery Green so couples or families can enjoy ice skating at the park before dinner or taking in the holiday lights after dining. The menu is oh-so-French and begins with choices such as lobster and crab bisque, endive salad or Wagyu beef tartare. For le plat principal, or main course, there's a choice of roasted duck breast, beef tenderloin, seared redfish or winter vegetable risotto. Dessert is the traditional buche de noel, a chocolate sponge cake roll filled with chocolate mousse.

For Italian-Americans, Christmas Eve is a night where the family celebrates with the traditional seafood extravaganza, the Feast of the Seven Fishes. While some sources, such as Eataly, say that the seafood feast was rekindled by Italian immigrants in America to feel closer to their homeland, the custom originated with Roman Catholics who would forego eating meat or dairy during holy observations.

At Shanon Scott's authentic Italian restaurant, Roma, chef Sandro Scarafile has created a special menu for those wishing to observe the tradition. It begins with antipasto of marinated salmon,  jumbo lumb crab with avocado and a Carpaccio di Polpo, thinly sliced octopus. The pasta course offers ring pasta with baby shrimp in saffron sauce and a squid ink fettucine with lobster. The secondi is Monkfish with Spicy Calabrian Sausage and also a Chilean sea bass over bell peppers and mint. The dinner is finished with the customary panettone, this one served with limoncello gelato. 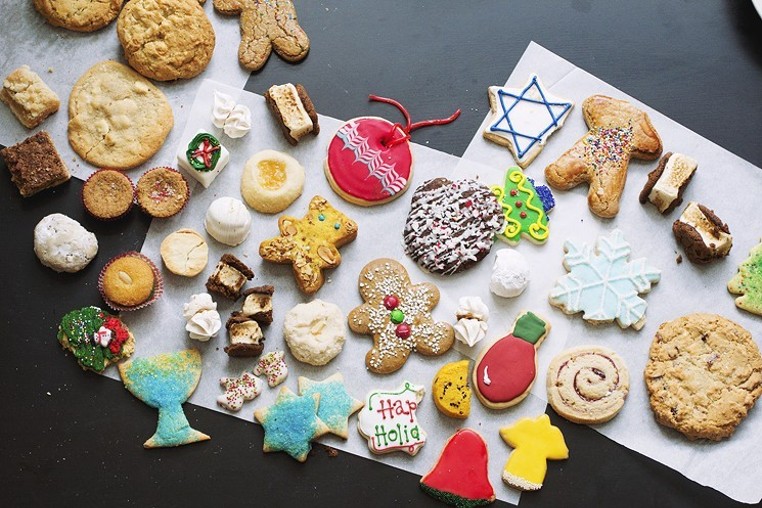 Three Brothers Bakery might still have some holiday cookies left.
Photo by Erika Kwee
The Jucker family's baking history goes a long way back to Poland where the family first opened a bakery in the 1800s. After surviving the concentration camps during WWII, members of the Jewish family immigrated to Houston and have operated a bakery in the city for over seven decades. There are currently three locations of Three Brothers Bakery but the Braeswood store is the only one that will be open for Christmas Day. There will be no pre-orders. Customers can make a last minute run to the bakery for pastries, pies, cakes and cookies for their holiday celebrations. All items will be sold on a first-come, first- served basis. Brunch can still be had at Xochi.
Photo by Paula Murphy
We were going to offer up the return of Xochi's Sunday brunch buffet as a great after-Christmas outing but the Omicron surge nixed that idea. Chef Hugo Ortega and his team at H Town Restaurant Group have decided to suspend the brunch buffets, which they only recently brought back to three of the group's concepts. The suspended buffet services are a precautionary measure in light of the COVID pandemic.

However, Xochi, Hugo's and Caracol will all offer a Sunday brunch menu December 26. At Xochi, guests can start with oysters, raw or wood-roasted, and antojitos like Taquitos Dorados with smoked chicken. The more adventurous can try the Costillas de Puerco which is a dish of pork ribs in ant mole. There are also main plates such as Chilaquiles and Huevos Rancheros plus a Bistec con Huevos which is a 6-ounce grilled prime Angus ribeye served with huevos divorciados.

Xochi is well-known for its margaritas and mezcal cocktails but there are lighter adult beverages such as  sangria by the glass or carafe.
KEEP THE HOUSTON PRESS FREE... Since we started the Houston Press, it has been defined as the free, independent voice of Houston, and we'd like to keep it that way. With local media under siege, it's more important than ever for us to rally support behind funding our local journalism. You can help by participating in our "I Support" program, allowing us to keep offering readers access to our incisive coverage of local news, food and culture with no paywalls.
Make a one-time donation today for as little as $1.