Houston Black Restaurant Week launches July 10 and will run through July 19. The week-long event will feature black-owned restaurants throughout eight cities. The Black Restaurant Week LLC began in Houston in 2016, founded by  Warren Luckett and co-founders Falayn Ferrell and Derek Robinson. It started as a one-city food experience in Houston and has expanded to include seven more cities and 270 minority businesses nationwide. Cities with their own Black Restaurant Week events include New Orleans, Atlanta, Dallas, Washington D.C. and Philadelphia

What began as a culinary celebration of African American, African and Caribbean cuisine has now focused this year on reviving and saving the black restaurant industry during the COVID-19 pandemic while educating consumers on the abundance of cultural cuisines while dispelling ethnic untruths, according to a press release from the foundation. 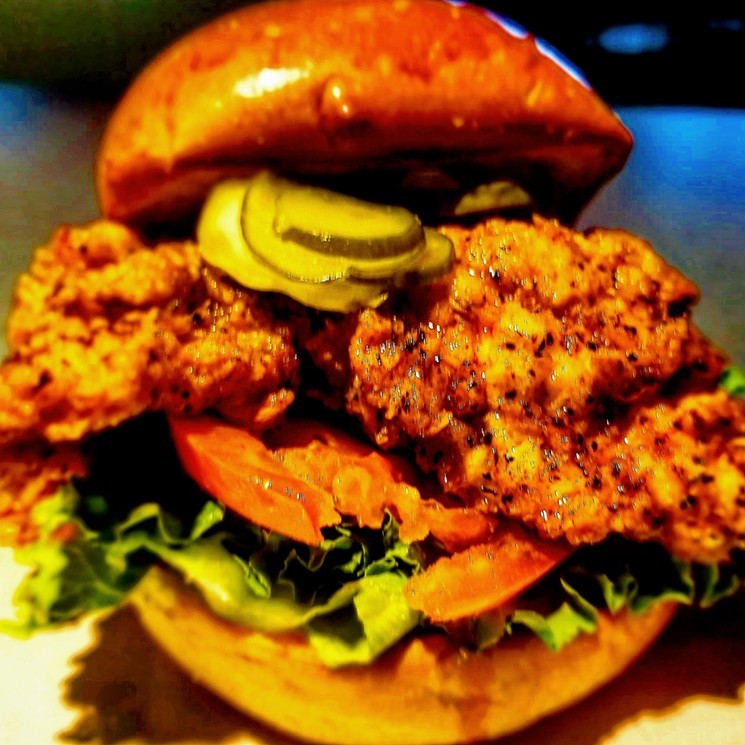 Founder Warren Luckett said, "Supporting the entire culinary industry, from farm to table, is necessary for providing more opportunities for the whole community to thrive." Luckett says the increased exposure for black-owned restaurants listed on the organization's new national website plus professional business guidance and educational events will help businesses expand their customer base and receive resources for ongoing success.

Lucille's beautiful Catfish and Grits is on the BRW Dinner prix fixe menu.
Photo by Lenard Smith
The Houston Press was given a preview of Lucille's prix fixe menus for Houston Black Restaurant Week. The lunch menu has two courses for $25. The appetizer choices include Fried Green Tomatoes, Butternut Squash or Watermelon Salad. For lunch entrees, guests can choose between Shrimp and Grits, the Hot Chicken Sandwich or the Oyster BLT. The dinner prix fixe includes three courses for $45. The first course offers Butternut Squash, Watermelon Salad or Lucille's Caesar Salad. The second course offers a choice of Shrimp and Grits, Bone-In Pork Chop or Catfish and Grits with Oxtail Gravy. For dessert, there is a delicious Croissant Bread Pudding.

A summer brunch on the patio at State Fare.
Photo by George Paez


State Fare, 15930 City Walk, opened in Sugar Land Town Square July 8. This is the second location for the restaurant which first opened in 2016 at 947 Gessner in the Memorial City area. In 2018, the restaurant was acquired by Culinary Khancepts which brought on Chef Justin Yoakum to lead the kitchen. Yoakum will now oversee both restaurants.

State Fare serves a blend of Southern comfort cuisine with Texas inspiration. Its weekend brunch on Saturday and Sunday will offer dishes such as Crawfish and Creole Benedict, BBQ Smoked Brisket has and H-Town Hot Fried Chicken with Skillet Cheddar Potatoes. There will also be griddlecakes, biscuit sandwiches, burgers and salads.

State Fare's new location offers a modern Texas bistro atmosphere.
Photo by George Paez
For lunch and dinner, there will be a variety of sandwiches, burgers, soups and salads plus appetizers such as Bayou Bacon-Wrapped Shrimp and  and Fried Green Tomatoes. Texas-inspired favorites such as the Sabine Pass Gumbo, the Kuykendahl Burger and Beef Chili Frito Pie with Texas Red Chili will please the palates of the Lone Star State's residents.

Cocktails include the Chili Paloma, State Fare Margarita and the Apricot Old Fashioned. With this weekend's temps set to max out above 100 degrees, a frozen flight is a great option.

State Fare Sugar land offers a gorgeous bar for lounging.
Photo by George Paez
For the Sugar Land location, there will also be a "Late Night" menu from 9:30 p.m. to close on Friday and Saturday. The bites on offer include Queso Blanco with Green Chiles, Dill Pickle Dip and Mini Cathead Biscuit Sliders. The BBQ Brisket Firecrackers are applewood bacon-wrapped jalapenos stuffed with brisket and cream cheese. Another late night treat unique to the location will be the State Fare Breakfast Plate normally served at brunch. It features two eggs, spicy bacon, two house-made sausage, skillet hash browns and a cathead biscuit. That should keep you going all night long.

State Fare is a family-friendly restaurant but also offers a large bar for enjoying its daily happy hour plus an expansive patio for those willing to take on Houston's summer temperatures.

Tony's Mexican Restaurant, 2222 Ella, has lost its founder and owner Tony Vega. Vega passed away July 2 from a heart attack. He was a deeply religious man who enjoyed sharing his faith with his guests.

Vega opened Tony's on Ella in 1992 and local Garden Oaks and Oak Forest residents were regulars not only for the cheese enchiladas, but the smiling face of Vega himself greeting guests and welcoming them to the restaurant that he loved.

Vega was the proud husband of Rafaela Vega, father of nine children and grandfather of three.

Bo-Bobs, 7127 Fannin, opened last month inside Dean's Grocerette, Delicatessen and Florist. It has added a Cajun-Creole take-out to its variety of offerings. There's gumbo in small, medium and large sizes plus fried fish, shrimp, wings, pork chops, hamburgers and grilled or blackened fish.

Get sticky with it at Sticky's Chicken.
Photo by Benson Vivares

Sticky's Chicken, 2311 Edwards, reopened July 7 after temporarily closing June 29 when a team member at Sticky's was exposed to someone who tested positive for COVID-19. Out of an abundance of precaution, the restaurant closed while all team members were tested. For now, it is offering take-out, online ordering and delivery through UberEats only.

The former food truck from the Vivares family opened its brick and mortar at Sawyer Yards in January of this year. Its signature sticky sauce was created by Ceferino Vivares, father of siblings and co-owners Patsy and Benson Vivares. The sauce is served on chicken wings and dishes like its Sticky Chicken Over Rice. Unlike some take-out foods, Sticky's travels well.

Cavatore Italian Restaurant, 2120 Ella, reopened its dining room July 9. Last week, we reported that the Italian restaurant was reverting to curbside take-out only due to the dine-in restrictions going back to 50 percent capacity. Now, owner Federico Cavatore has decided to reopen for in-house dining. He is also bringing back live piano music for Friday and Saturday evenings beginning July 10. Guests can make reservations for lunch and dinner through Open Table. Curbside pick-up for to-go orders will still be available.

Celebrate a belated Canada Day at Riel's with poutine.
Photo by Kirsten Gilliam
Riel, 1927 Fairview, reopened July 6 after closing temporarily to have all of its staff members tested for COVID-19. None of them tested positive. The restaurant was closed for Canada Day, which was July 1. That meant that chef/owner Ryan Lachaine had to offer his Canada Day menu this past week. Still, time and dates are fluid during this pandemic. The special menu of Canadian dishes such as poutine, nanaimo bars and tourtiere pierogies is available through July 11.

Good Dog has reopened in the Heights and Montrose.
Photo by Brooke Viggiano
Good Dog, 1312 Alabama and 903 Studewood, has reopened. The company closed all of its locations, including the kiosk at Rooftop Cinema Grill, after a couple of employees tested positive for COVID-19. All staff members were required to undergo testing for the virus. The Heights location was able to reopen July 4 with enough staff while the Montrose location reopened July 7. Both locations are currently open for patio dining, curbside, take-out and third party delivery. All safety precautions are being taken.

Good Dog is known for its gourmet hot dogs which include the Banh Mi Dog, the Southern Comfort with chow chow, its Chillin' Dog topped with beef and chorizo chili and snacks like its Hot Pretzel Rolls and Fried Pickle Jar. It also offers sandwiches, salads and soups on the menu. There are milkshakes, beers and wine, too.

Fiesta Mart, 4200 San Jacinto, will close July 10, as first reported by abc13.com. The expiration of its lease, declining sales and the arrival of new grocery stores in the area were cited as reasons for the closure.

Lan Hai Asian Restaurant, 17575 Tomball Parkway, opened May 6 for dining but went back to temporarily serving curbside, pick-up and delivery only July 8, due to the resurgence of coronavirus cases in Houston and Harris County. The Willowbrook-area restaurant serves a variety of Chinese dishes such as sesame chicken, xiao long bao, five spice chicken, and spicy beef tripe. There's also roast duck and pad Thai available on the extensive menu.
KEEP THE HOUSTON PRESS FREE... Since we started the Houston Press, it has been defined as the free, independent voice of Houston, and we'd like to keep it that way. With local media under siege, it's more important than ever for us to rally support behind funding our local journalism. You can help by participating in our "I Support" program, allowing us to keep offering readers access to our incisive coverage of local news, food and culture with no paywalls.
Make a one-time donation today for as little as $1.