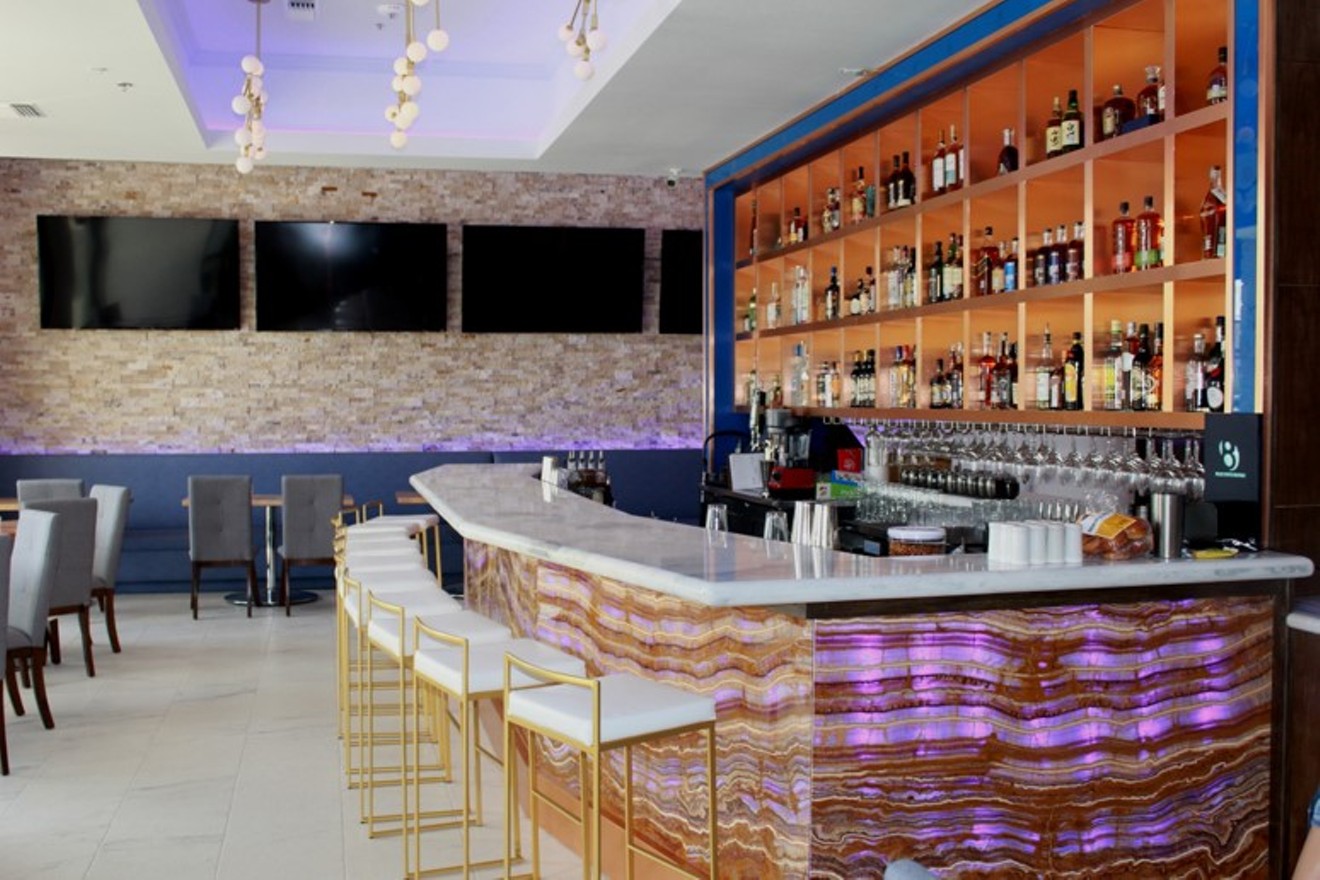 Blue Onyx Bistro, 4720 Richmond, began its soft opening March 27. Co-owner and executive chef, David Chang's newest restaurant will offer steaks, seafood, and sushi with the menu being influenced by Chang's experience in Chinese, Japanese and French cuisines. Chang immigrated to the United States from Taiwan as a young man and owned and operated a number of restaurants before opening Redfish Seafood Grill in Northwest Houston in 2003.

The design is based the blue onyx stone, which represents strength, happiness balance. Nicole Nui is the restaurant's .

Blue Onyx will also use salad greens from organic farm, H2O, in Hockley. The greens are grown aquaponically with no chemicals.

A grand opening date is still to be determined.

Pappy's is easing down the road to a new locaion.
Photo courtesy of Pappy's Cafe

Pappy's Cafe will open its new location, 12313 Katy Freeway, Thursday, April 5, at 11 a.m. The new restaurant will feature a larger building with additional parking, an expanded bar, and two private dining rooms. Owners Paul and Lydia Braden are moving Pappy's down the road a piece after the lease on the current location closes on Saturday. So if you want to enjoy a nostalgic last look at the original Pappy's Cafe, 9041 Katy Freeway, March 31 will be the last day to do so. You know you are thinking about dipping those curly fries into the gravy.
Photo courtesy of Pappy's Cafe
Pappy's Cafe started in 1983 and has been serving its country-style cooking for 34 years. Its chicken fried steak was rated among The Top Ten in Texas by Wide Open Eats in 2017. With all the delicious chicken fried steaks in the Lone Star State, that takes some doing.

There will be a public opening celebration April 14, noon to 4 p.m., with live music, giveaways, specials and an all day(yay!) happy hour. There will also be an unveiling of Pappy's new specialty cocktail menu. Fancy.

Back Pew Brewing, 26452 Sorters McClellan Road, will host its grand opening party for its taproom, The Sanctuary, April 6 and 7. There will be 30 taps flowing with special beers and food trucks such as Space Lobos and Yummy Dog available.

Back Pew will have its new Sanctuary beer steins for sale, but they are expected to sell quickly, so be there early or you'll be crying in your beer (without a stein).

The grand opening celebrations will start at 4 p.m. on Friday, with Houston's Beatles tribute band, The Fab 5, hitting the stage at 6 p.m. to 9 p.m.

Saturday, April 7, the festivities begin at 11 a.m. and go throughout the day until 7 p.m., with the bottle release of its Act of Balor, a brew that is barrel-aged in Booker's Bourbon barrels.

Egghaus Gourmet, 2042 East T.C. is slated to open this summer next to King's BierHaus. The upcoming breakfast concept is the newest venture from Austrian father and son duo, Hans and Philipp Sitter, the team behind King's Biergarten in Pearland and King's BierHaus in the Heights. Options will include King's Kolaches and scratch-made dishes with cage-free eggs.

Kings' Biergarten, hosted a kolache pop up last week, but if you missed it, you have another opportunity at the kolache pop-up at King's Bier Haus, 2044 East T.C. Jester, on April 21 to get a taste of what the Sitters are bringing next. Jonathan's the Rub, 9061 Gaylord, the cozy Hedwig Village neighborhood restaurant, just celebrated its tenth anniversary and now has the go-ahead on its second location to be built at Memorial Green, by Texan Builders, the company behind such Houston hotspots as Artisans and Kiran's.

Expected to open in the fall, the new Jonathan's will feature a full bar with an extensive cocktail program, differentiating it from the original with its BYOB option. However, there will still be an open kitchen to watch Jonathan Levine, chef and self-proclaimed " oldest line cook in Houston" at work. Expect Houston-oriented cuisine with a pan-Latin influence.

The new restaurant will have space for 150 diners inside, with a private dining room and covered patio offering additional seating.

Houston canot get enough chicken and waffles. Bring it on.
Photo courtesy of Jonathan's the Rub

The original Jonathan's the Rub will remain BYOB and retain the same patron-pleasing menu. Like chicken and waffles. Photo courtesy of La Balance
La Balance, 8050 FM 359, had its grand opening March 21. It was originally located at 20680 Westheimer, in the Cinco Ranch area and was the go-to restaurant for French food in Katy. Unfortunately, Hurricane Harvey wreaked havoc on the area last August and owner, Manuel Atenco, decided to reopen in a new location westward in Fulshear.

The restaurant serves French cuisine " with a contemporary twist", including typical French like boeuf bourguignon, french onion soup a .

La Balance will serve a pre-fixe Easter brunch on April 1 for $35 a person. Reservations are required for seating times.

No more chocolate stained fingers with ice cream sandwiches on a stick.
Photo courtesy of Popbar

Popbar, 9595 Six Pines, had its soft opening March 1, according to Community Impact. The gourmet gelato pop chain has locations all over the United States, Canada, Panama, Russia, and Singapore. The are made fresh daily with high-quality ingredients and are gluten and preservative-free and kosher-certified.

Forget the ice cream truck. These are popsicles for big kids.
Photo courtesy of Popbar
Popsicle lovers can choose from frosty treats like the popGelato, which comes in at a sweet 149 to 198 calories, depending on the different choices available. For a lactose-free and vegan-friendly option, there is the popSorbetto in a variety of fruit flavors with a mere 69 to 79 calories for an even bigger incentive to treat yourself

Yogurt fans can opt for the yogurt pop and for cookie sandwich lovers, there is the indulgent popWich, an ice cream cookie sandwich in popsicle form, dipped in your choice of coconut, chocolate, pistachios and more. That will knock the childhood memories of frozen ice cream sandwiches from the gas station out of your mind forever.

There are 17 U.S. stores with ten more coming, including the Galleria in Houston.


Voodoo Queen Daiquiri Dive, 322 Milby, reopened according to Houston Food Finder. A fire two years ago put it out of business, temporarily. Owner Brandon Young officially reopened the rebuilt space on March 14. There are additional pool tables, two bars, and an expanded kitchen. The menu is not finalized yet during the soft opening of the Tiki-style bar, but there are Da Po' Boys, which can be made with delicious options like roast beef debris, fried shrimp, or andouille sausage. Plus, diners can try the secret one drop sauce. The dive's frozen daiquiris have ingredients that are also a well-kept secret, so don't ask, Bro.

We bet there's tequila at this new restaurant.
Photo by Lorretta Ruggiero
Tequila's Mexican Bar and Grill, 17440 FM 529, opened February 21. Its daily specials can be spotted on its Facebook page with dishes like fish ceviche and fajita salad. The menu offers the usual Tex-Mex plates, but there is a small vegetarian section as well.  The happy hour specials run Monday through Saturday from 11 a.m. to 6 p.m.

Night Heron, 1601 W. Main, opened February 7 after much anticipation and reporting as here in the Houston Press. The newest concept from Agricole Hospitality took over which formerly housed Lowbrow it into a comfortable spot for creative cocktails and Asian/ Caribbean inspired cuisine. Brunch is available on Saturdays and Sundays and there are libations such as Painkiller and Corpse Reviver available for party people who need a " hair of the dog" to remedy last night's indulgence.

Night Heron 's cocktail menu includes information on when and where the drinks originated from. We never knew that the Grasshopper, the minty green cocktail, was created at Tujague's in New Orleans in the 1950's. We just knew it was a delicious and not too alcoholic foofy cocktail that we could get away with ordering at East Bo's Chinese restaurant in 1988, but we digress.

Besides some vintage favorites and new creations in the beverage department, the food menu offers dishes like jerk chicken, Singapore Chili Clams and, as executive chef Jacob Pate promised, a great burger, made with smoked cheddar and 44 Farms beef.

The patio is dog-friendly and happy hour is Monday through Friday, 2 p.m. to 6 p.m., except Tuesdays, when Night Heron is closed. You have to go be happy somewhere else that day.

Four Seasons Hotel Houston, 1300 Lamar, has announced that Rafael Gonzalez will serve as the new executive chef, overseeing and leading the culinary operations of the hotel's restaurant Quattro, plus catering and banquets. He will also be spearheading its whiskey-centric bar, Bayou Bottle, with chef and restaurateur, Richard Sandoval.


Gonzalez is a native Floridian who began his Four Seasons career after working in such renowned restaurants as Le Bernardin and Jean Georges, with his first experience as executive sous chef at The Pierre, formerly a Four Seasons hotel. Most recently, he oversaw dining operations at the Viceroy Anguilla.


We end our list with a fond farewell to Underbelly, 1100 Westheimer. Chris Shepherd's flagship restaurant is closing after six years to make way for his upcoming steakhouse, Georgia James, which will take over . The closing party is April 1 from 3 p.m. to 7 p.m. Check its facebook page for information on tickets.