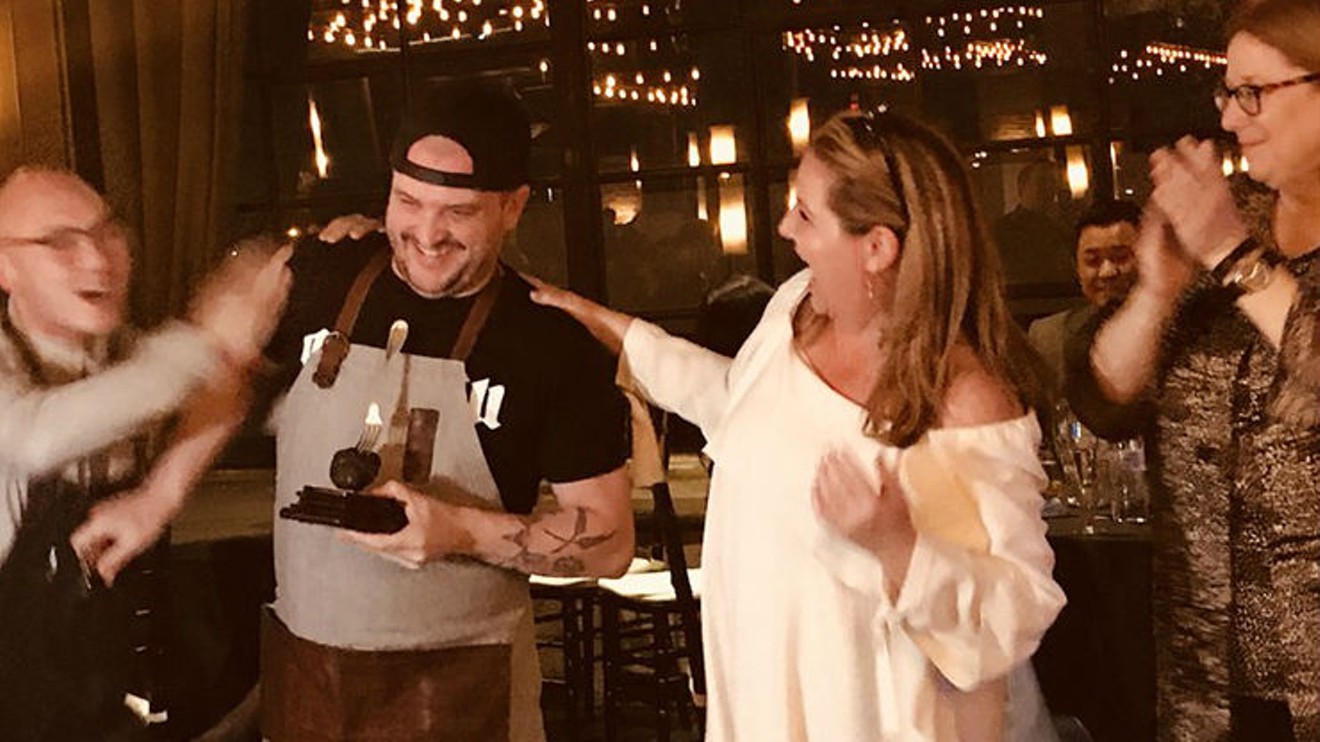 Diane Roederer and Chef Ryan Lachaine of Riel, who won the peoples choice award with his truffled pierogi. Photo by Kate McLean
Diane Roederer, owner of DR Delicacy, kicked off her fourth annual truffle competition, The Truffle Masters, at the Astorian Monday night. The event benefited Casa de Esperanza, “The House of Hope for Children.”

Twenty-two chefs were given a pound of French or Spanish truffles to play with, and by the end of the night chef Austin Simmons (Bistro by Hubbell & Hudson and Cureight) was declared the fourth Truffle Master with his truffled “Grilled Cheese.” Chef Ryan Lachaine of Riel won people’s choice award with his "Potato Leek and Truffle Pierogi." Chef Austin Simmons of Bistro by Hubble and Hudson and Cureight wow'ed judges with his "Grilled Cheese With Truffle."
Photo by Kate McLean
The chefs had to take one pound of black truffles and stretch it to cover 420 portions while still maintaining as strong of a  truffle flavor as possible; no easy task. They worked to infuse truffles throughout the dishes and most of them shaved or microplaned them to finish. The most intensive preparation award definitely goes to chef Dimitri Voutsinas of Emmaline who cracked the top and cleaned 420 egg shells. He filled them with a delightful truffle cream that was shot out of a siphon and then littered with batons of black truffle.

Chef Danny Trace of Potente, made a squid ink, foie gras and truffle macaron that rested on top of a port strawberry jam and truffle ice cream. That’s a mouthful I’ll never forget.

A lot of chefs incorporated foie gras into their creations because, why not? The warm “Foie Gras Royale” from La Table and the “Truffled Foie Gras Roasted Indian Creek Mushroom” from A’bouzy were oh so rich and truffle-y. The “Cassoulet” from chef Ryan Bouillet of A Fare Extraordinaire with pork belly, cherry venison sausage, foie gras, pork cracklin’s AND shaved truffles made you want to bounce with 12 samples and call it a night.

At the end of the night, the biggest truffle flavor I tasted was from the truffle soup on the "Mushroom Truffle Toast" from chef Edel Goncalves of Fielding's Local Kitchen + Bar. I missed the “Truffled Brie Croquette” from Etoile Cuisine et Bar, but, Shelley Edelstein, a die-hard Truffle Masters goer stated, “[It was our favorite.] I went back for multiple samples...” Which is probably why it went fast, thanks Shelley.

Chef Robert Del Grande of Café Annie made a cinchona bark and toasted orange truffle tonic to go with his brand of gin, Roxor, cocktail…and then he went and shaved truffles all over the top.

“Because I’m a hunter,” Roederer said as if her decision to import and sell truffles in Houston were a simple one. In 2014 Roederer, an avid big-game hunter, came home after an excursion in Spain with the clear mission to begin importing truffles. While there are plenty of truffle festivals in the United States and around the world, there are very few truffle competitions.

Like right out of a romance novel, Roederer, originally from Strasbourg, France, moved to Texas after falling in love with the French owner of a big-game ranch she visited in Del Rio. Twenty years later, ‘The Truffle Lady’ is importing and delivering truffles, among other luxury products, to chefs all over town.

Roederer started growing her business in 2014 by surprising chefs at their restaurants, calling them into the dining room and having them open a mysterious box. Roederer states, “I think the big difference is when I see [the chef’s face] open that box of fresh truffles…I remember one nearly jumped this high, they were so excited.” Other than truffles, DR Delicacy also imports foie gras from France, caviar, mushrooms and seafood. She even brought in snail eggs for Mastro’s this past Christmas.

Roederer is excited about what she is importing next, though she’s keeping quiet on what the product is. “It is something that is of high demand in the U.S. that is not brought in on a regular basis. This product actually comes from very close to my hometown [Strasbourg, France].”

On what she likes best about dealing with chefs, Roederer added, “I think it’s the respect I have for them.” Roederer intends to incorporate out-of-town chefs in future Truffle Masters competitions and perhaps even take the event to New York City, among other places.