Chef Chat: Anthony Russo Talks the Importance of Ingredients and Keeping it Fresh 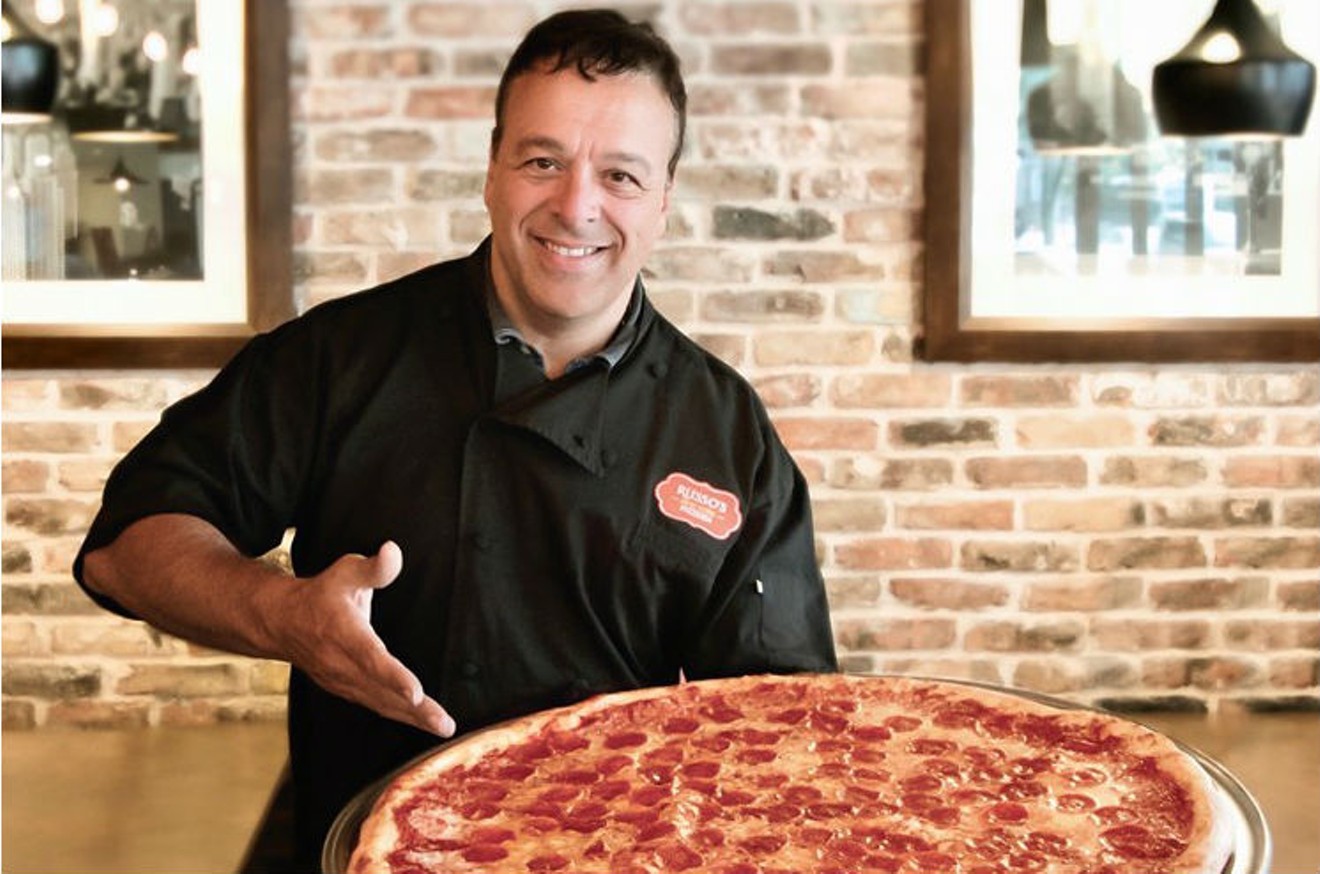 It’s hard not to fall a little bit in love with Chef Anthony Russo’s genuine, engaging excitement. Maybe it’s that New York, Italian twang he still possesses, even though his family moved to Galveston when he was 12. Maybe it’s that his eyes light up when he smiles, or, maybe it’s his intense devotion to using fresh ingredients with his family’s time-honored recipes.

Russo caught the restaurant bug early on from his parents and since opening Russo’s Pizzeria in Galveston at the young age of 17, hasn’t lost momentum. Now, he owns and franchises Russo’s New York Pizzeria and Russo’s Coal-Fired Italian Kitchen in 36 locations nationally and internationally (with nine in development.)

What’s interesting about Russo’s franchising model is that no matter how far-reaching his franchises are (Saudi Arabia for one), he and his crew personally train each franchisee to make everything fresh from scratch. Even the gnocchi which, if you know, is all about feel.

We sat down with Chef Anthony Russo to talk about his origin, sourcing balsamic vinegar, and his go-to 3 a.m. pasta…

EOW: How does a full-blooded Italian male get into making gluten-free products?

AR: (Laughs) Well, six years ago I used to make this low-carb pizza. Some of the customers coming in had Celiac Disease. I didn’t know what that was so I looked into it. I started playing with our dough recipes and came up with a gluten-free crust. I was surprised at how many people were coming to Russo’s because of this particular menu item.

I decided to develop it across our franchise system and then take it into retail. I always wanted to make frozen pizzas but I didn’t want to make bad frozen pizza. I wanted to make good frozen pizza. It took me years to find a co packer (a company that will package your product) where I could bring in my raw, fresh ingredients to make the pizza sauce on site. We launched it three to four years ago. My gluten-free pizza crust is thin so you can taste all the ingredients.

EOW: How long did it take you to nail that gluten-free pizza dough recipe?

EOW: Where are you from originally?

AR: New York, New Jersey. My parents came from Italy. My dad is from Naples and my mom is from Sicily. They moved to New York in 1962, and in the mid ‘60s we moved to Patterson, New Jersey. My mom’s side of the family owned restaurants in Italy and the Brooklyn area. My dad always wanted to cook. He decided to move us to Texas in 1978 and we opened our first restaurant in Galveston [Russo’s Italian Restaurant]. After school, my homework was: work in the restaurant.

EOW: What was your first job in the kitchen?

AR: Washing dishes and prepping. My dad used to hire chefs from Sicily and different parts of Europe to come cook with us. So, for a few years we had all these great chefs come to Galveston to work with us. Osso buco, fish stock, chicken stock, everything was made fresh. We even had a machine to make fresh pasta. [Russo’s had] all original recipes that my parents were making up.

AR: About 21 years. I always had a passion for food. Working in my parents’ restaurant, as I got older, I wanted to open my own restaurant. So, when I was 17 years old, I opened up my first pizza shop.


EOW: What bank was this?

AR: Moody Bank in Galveston. I got a loan for about $26,000 dollars. That was just enough money to buy a pizza oven, a dough mixer and a prep table. That was it.

EOW: What about rent?

AR: Well, rent, I had some savings. Then my parents gave me a few bucks when they found out, surprised, that I got a loan from the bank. I opened my first store in Galveston, a tiny little pizzeria, called Russo’s Pizza. It was open for about four years and then I moved to Clear Lake to open up Anthony’s Pizza. That was a big hit. It was a simple menu; pizzas, salads, calzones.

From that point on I never looked back. I wanted to come to Houston, the big city. So, I brought Anthony’s to Montrose in the late ‘80s, it was fine dining Italian. In ’96 I opened up Russo’s Pizzeria… that I wanted to franchise. That’s where it started. I wanted to develop a franchise brand that was fresh from scratch. I didn’t want to have a commissary or buy pre-made dough or pre-made sauces. It took me a few years to put it all together, really good recipes, because we would be training these franchisees to make everything [in house.]

EOW: You’re doing all this fresh in-house stuff, is this at every location?

EOW: How extensive is your training?

AR: It’s six to eight weeks training. We start [in the] back of the house to make our own salad dressings, marinara sauce, chicken stock. [The] same way we do it today is how we did it back in the ‘80s at my parent’s restaurant. Pretty few restaurants today do it [make everything in house.] Unless you go to a nice fine dining restaurant, but, in the franchise world it doesn’t exist.

EOW: Do you personally help open each store?

AR: Everyone comes here [5727 Westheimer] to train and then when they open I go out there with my staff and spend about two weeks at their location. These guys that are buying the franchises, they have pride in selling their pizza because they made it [themselves]. They have pride in serving their guest high quality food and watching the customers’ reaction. They are passionate about what they create in their kitchen.

If you have a good pie, that’s what’s going to build your business. My focus has always been on the food. Food comes first. Also, using the right ingredients. As I built these stores, I went to Italy to [source ingredients]. Balsamic vinegar I get direct from Italy, also, because of my family’s connections I get my extra virgin olive oil from Sicily. I bring in containers of the stuff. I bring in great mozzarella cheese from this small dairy farm in Wisconsin that I sourced out.

Thirty years doing this and that’s what I put together, this nice package where we could franchise the concept. So, we opened up our restaurants in new markets and we built them differently. They all look unique with different style to give that personal neighborhood feel.

EOW: How was sourcing out balsamic vinegar?

EOW: Did you try that straight or with parmesan?

AR: No, no, no, no, no straight. They put it in a small little spoon (laughs) its 100-year-old balsamic right? It was like syrup it was so thick, it was amazing. I liked the story of the place. It’s a family vineyard and the family still owns it. They had all these different small barrels with the years [aged balsamic]. So, I’m buying vinegar from them for the stores.

EOW: What ingredient are you most excited for in 2018?

AR: I like Cauliflower. I added a Cauliflower Fritti to our menu here. I think it’s really good if you roast it, and makes a good topping on a pizza.

EOW: If Sicily or Naples were disappearing tomorrow and you could only save one which would it be?

AR: Oh, that’s hard. I like the Amalfi coast. That’s tough. In Sicily I like Taormina, that’s my favorite. I like the food better in Sicily. (pauses) I’d say Sicily because of the food.

EOW: What’s your favorite beach to lie on and what’s typically in your glass?

AR: Wow, that’s a tough one. I like Hawaii beaches or Sicily. I like white sand beaches.

EOW: What are you drinking on the beach?

AR: Barolo is my favorite wine. I like Amarone and Barolo.

EOW: Say it’s 3 a.m. and you’re making pasta for yourself and a friend, what would it be?

AR: We make a 28-inch party pizza, it feeds about ten people.

EOW: Is that just one guy flipping the dough?

AR: Yeah. We sell one of these giant slices for lunch. It’s 14 inches [long].