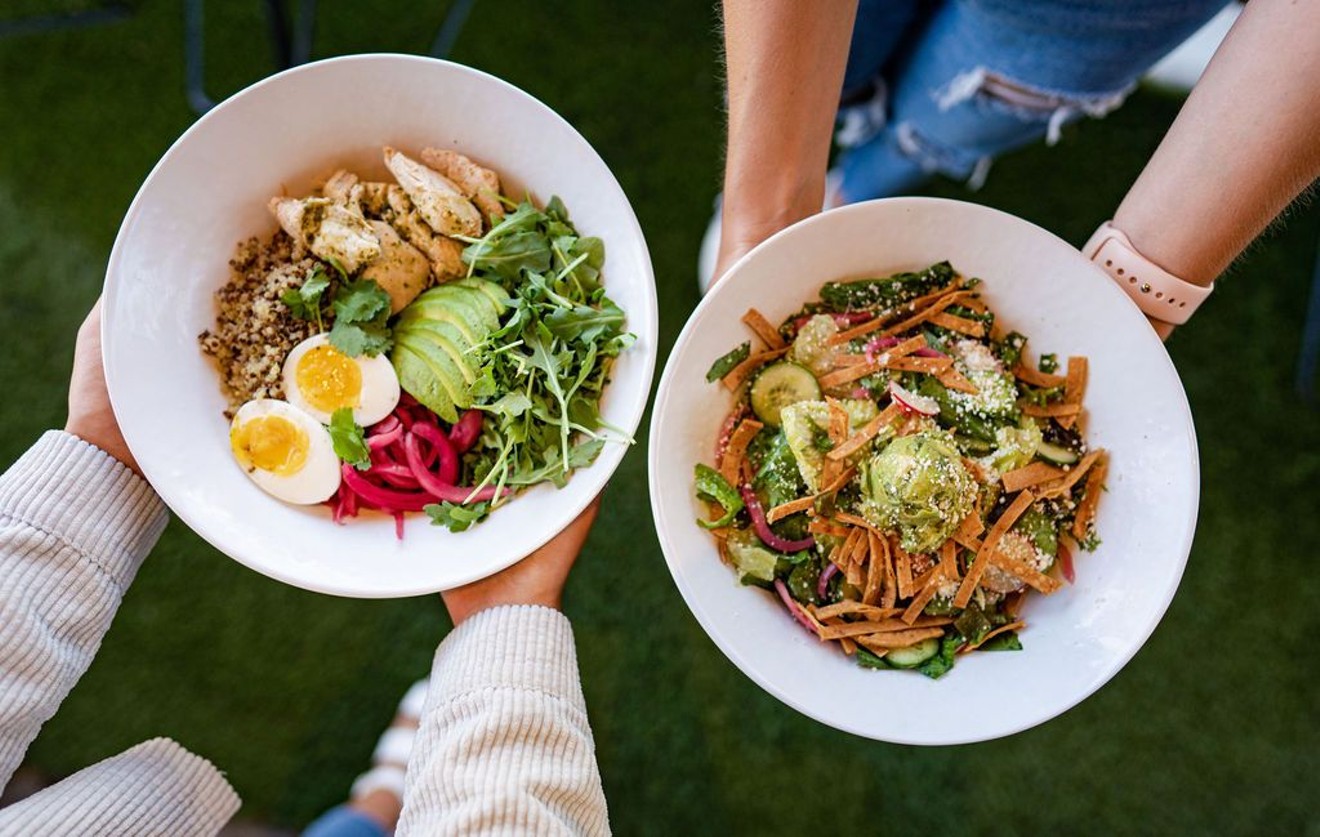 The Crack Shack, 23501 Cinco Ranch, is slated to open in early 2023 in Katy. Originally founded in San Diego in 2015, the concept is inspired by Southern California/Baja fried chicken. It began as a project from the owners of the upscale San Diego restaurant Juniper and Ivy, a team that includes Founder and CEO Michael Rosen, Director of Culinary Jon Sloan and Director of Operations Dan Pena. The Crack Shack has now expanded to nine fine casual eateries.

The restaurants use fresh, non-GMO, "beyond free-range" chickens from boutique farms plus pasture-raised farm fresh eggs and condiments made from scratch. Its proprietary Crack Spice is a blend from Le Sanctuaire, a California purveyor. The menu offers fried chicken sandwiches such as the Coop Deville made with fried Jidori breast, pickled Fresno chiles, pickles, lime mayo and Napa cabbage on a brioche bun. The Firebird is spicy fried Jidori chicken thigh with cool ranch and crispy onions on a potato roll. The Senor Croque is a five napkin affair with crispy chicken, bacon, fried egg, cheddar and miso-maple butter. Crack Shack's fried chicken is also sold by the half or whole bird.

We don't know what makes it SoCal/Baja fried but it looks good.
Photo by Jordan Bree Photography
There are also Fried Chicken Oysters, the little dark meat bits on the back of the bird that many people are unaware of. Other nosh includes Mexican Poutine, Schmaltz Fries and Fire Nugs, chicken nuggets tossed in fire sauce. Guests can also try the chicken in bowl form with various grain and vegetable options. There's a Lil Cluckers menu, shakes and cookies, too.

To celebrate its first foray into Texas, the company is giving away tickets to the Houston Texans vs. Jacksonville Jaguars game on New Year's Day. To enter for a chance to win, guests can go to betterchickeniscoming.com. Becks Prime has more than burgers.
Photo by Becca Wright
Becks Prime, 2902 Kirby, reopened December 22 after a complete renovation of its interior, exterior and patio spaces. President of Becks Prime, Molly Voorhees, says the original location was due for a revamp. " Our classically designed restaurant had remained frozen in time for 37 years since first opening on Kirby in 1985 so it was time for a refresh while still holding onto reminders of where we started, " Voorhees says. Becks Prime's burgers are its star items and the restaurant made the list of "Best Burgers in the U.S.A." by Gayot.com taking first place in 2021 and second place in 2022. It also offers chicken sandwiches, steaks, Ahi tuna and a selection of fresh salads. There are soft drinks and delicious shakes plus beer and wine. The new deck is shaded by trees and umbrellas.
Photo by Daniel Ortiz Photography
Voorhees, who is also President at Winfield's Chocolate Bar and co-owner at Agnes Cafe & Provisions said in a press release, " We have missed our neighbors in River Oaks and cannot wait to welcome everyone back just in time for the New Year!"

PJ's Coffee, 2533 W. Grand Parkway, began its soft opening December 22 in the Morton Ranch area of Katy. It's the third location for Houston and the 15th in Texas. Founded in New Orleans in 1978 by Phyllis Jordan, it was bought in 2008 by brothers Paul, Steven and Scott Ballard. The brand sources 14 origin Arabica coffees from Sumatra to Papua New Guinea. The menu offers espresso-based beverages, flavored coffees and its Original Cold Brew iced coffee. There is also a food menu of pastries and desserts.

Three Brothers Bakery, 4036 Braeswood Boulevard, will be open for Christmas and Hanukkah December 25 from 10 a.m. to 2 p.m. It is the only Three Brothers that will be open for the holiday. Items are available for purchase on a first come-first served basis. There are Sufganyot (Hanukkah donuts), cookies and cakes for your holiday celebrations. 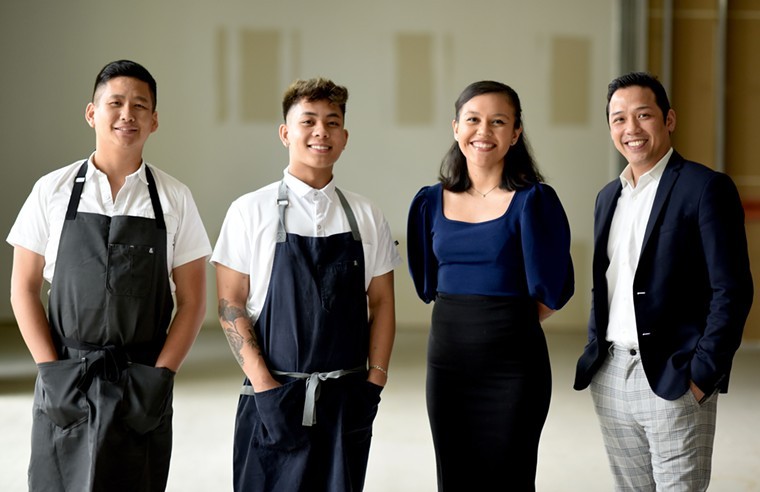 Chef Sherman Yeung and his young team, Jio Dingayan, Ashley Castro and Le Chau are ready for the New Year.
Photo by Kimberly Park
Money Cat, 2925 Richmond, is planning to have a grand opening celebration January 7. The new restaurant comes from owner and executive chef Sherman Yeung with a leadership team of Jio Dingayan as chef de cuisine, Le Chau as general manager and Ashley Castro as assistant general manager. The combined experiences of the young crew as first and second generation Asian Americans is coupled with appreciation for Japanese culinary technique resulting in a relaxed, yet innovative take on New Japanese cuisine.

Guests can expect nostalgic and whimsical approaches to classic fare like sushi and cold preparations along with gourmet versions of snack foods and layered multicultural desserts. Final details are being worked out and we will have more information about the menu and the opening in January. Coffee and biscuit sandwiches are a happy start to the morning.
Photo by Jordan Daniels
Maple Street Biscuit Company, 4906 FM 1463, opened in Katy November 29. It was founded in Jacksonville, Florida in 2012 by Scott Moore and Gus Evans with a mission to serve others and be part of the community. In 2019, the brand was sold to Cracker Barrel for 36 million dollars and has seen a huge increase in store openings since then, with 55 in operation across several states. The Arabica beans are all roasted in Jacksonville before being delivered to each location for in-house grinding.

The Katy location is the first for the Greater Houston area and there is another planned for 4836 Waterview Town Center in Richmond soon. A spokesperson told the Houston Press that the company is hoping to open the Richmond store in early spring 2023. Sophie Theriot is the "Community Leader" for the new location. 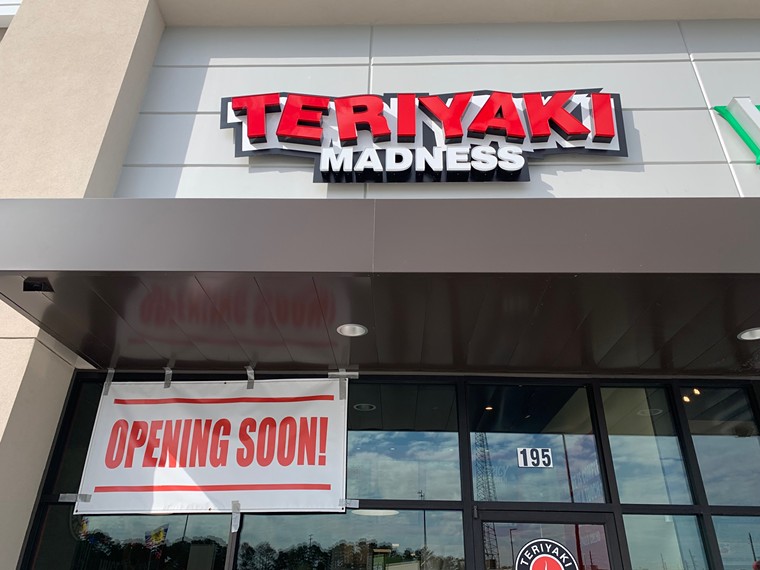 It's coming soon, but how soon?
Photo by Lorretta Ruggiero
Teriyaki Madness, 14123 Grant, is currently in the final stages of being built out. The Colorado-based teriyaki bowl concept has locations in Houston, Fulshear, Humble and Conroe. The Cypress location will be the 7th for the Greater Houston area. It will primarily offer take-out with limited seating for dine-in.

Some of its bowls include Chicken Teriyaki, Chicken Katsu, Salmon Teriyaki, Steak Teriyaki and Spicy Tofu. There are starters such as edamame, chicken potstickers and crab rangoon. Sides include brown rice, white rice, fried rice, stir-fried vegetables and noodles. Chris Rakow takes on a new role at Urban South Brewery.
Photo by Natalie Holderbaum
Urban South Brewery has brought in Chris Rakow as Director of Brewing Operations for all Urban South locations including the Houston brewery at 1201 Oliver at Sawyer Yards. With over 14 years of brewing leadership in the craft beer industry, Rakow will oversee all operations including Research and Development, recipe formulation and brewing staff. 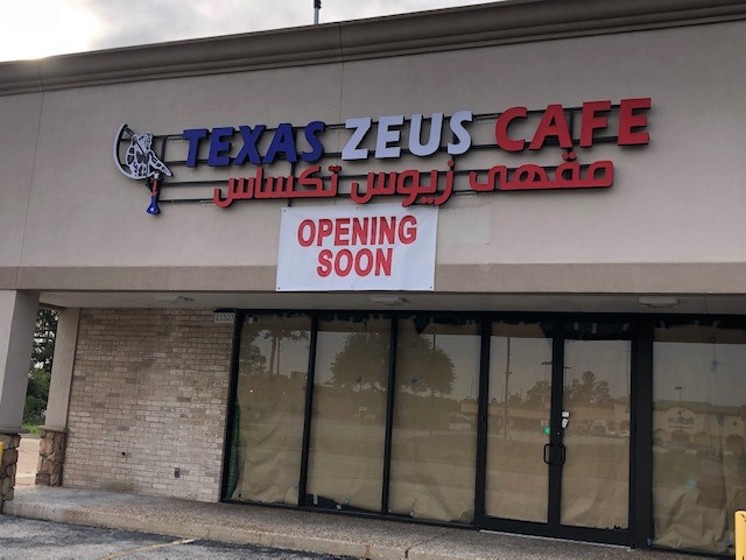 We are waiting on more details.
Photo by Bob Ruggiero
Texas Zeus Cafe, 13323 Jones, has put up signage at the space that used to house Napoli's, a longtime  pizza restaurant that closed in 2019. We have no details as of yet about the upcoming restaurant but we're keeping our eyes on it.
KEEP THE HOUSTON PRESS FREE... Since we started the Houston Press, it has been defined as the free, independent voice of Houston, and we'd like to keep it that way. With local media under siege, it's more important than ever for us to rally support behind funding our local journalism. You can help by participating in our "I Support" program, allowing us to keep offering readers access to our incisive coverage of local news, food and culture with no paywalls.
Make a one-time donation today for as little as $1.