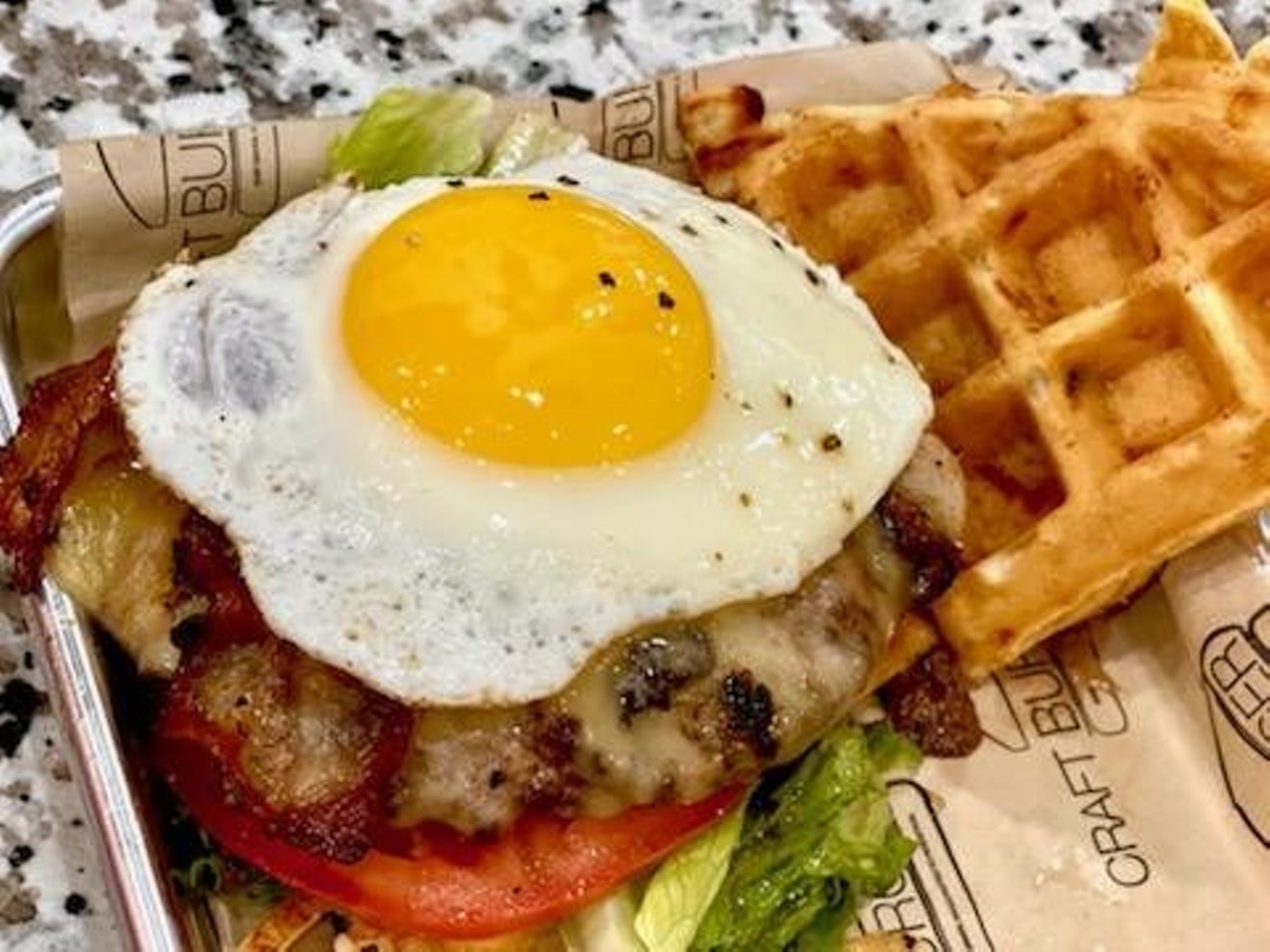 Don't save it for the morning after, have it now. Photo by Darren Lafferty

Craft Burger, 21945 Katy Freeway, opened December 26. This is the first brick and mortar for Shannen Tune, who began the business as a highly successful food truck in 2015. Craft Burger then took up residence as one of the vendors at Finn Hall in December 2018, a downtown food hall that has been temporarily (we hope) closed due to the pandemic. During that time, Tune has been using a "ghost kitchen" at Blodgett Street Food Hall to operate multiple concepts including Thick Chick, which he debuted earlier this year. The new concept, which features spicy hot chicken sandwiches, will be on the menu at the new Craft Burger location as will Pecking Order, Tune's fried chicken brand. Tune plans to add rotisserie-style chicken and grilled chicken to the concept  including jerk chicken as a nod to his wife Stacey's Jamaican upbringing.  Stacey is also a professional chef.

Tune garnered national attention when he represented Houston on the Food Network show Chopped in 2016, taking home the $10,000 prize as the episode's winner. He has also done professional stints at restaurants such as Joel Robuchon in Las Vegas and the Mandarin Oriental Hotel in New York City.

The new spot in Katy has 25 tables and the space is livened up by hometown pride murals lining the walls, done by local artist Israel Rodriguez (@ir_artwork). The offerings will include the Craft Burger menu plus revolving dishes from Tune's new concepts. The entire menu will also be available for online ordering as well.

Shannen and Stacey Tune are a culinary couple.
Photo by Darren Lafferty
Tune says, " I learned a lot about having multiple concepts come out of one kitchen from the Blodgett Street cloud kitchen." Tune hopes to expand his brands with delivery, take-out and dine-in options.

However, it is the Craft Burger concept with which many Houstonians are familiar. The Morning After Burger, featured on the Food Network, starts with a Black Angus beef patty, smoked gouda, lettuce and tomato and is further enhanced with brown sugar and chili-rubbed candied bacon and a sunny side-up egg on top of a bacon-cheddar waffle. Other craft burgers include the Truffle Butter Juicy Lucy and the Vegan Burger. There's a Nashville Hot chicken sandwich made with boneless chicken thigh plus chicken tenders and salads. Tune sources the meats locally, including the Black Angus beef from Ruffino Meats out of Bryan, Texas.

There are Craft Milkshakes to add to the burger experience and frozen drinks, beer and wine for imbibers.

A bounty of bagels awaits.
Photo by The Bagel Shop Bakery Staff
The Bagel Shop Bakery, 5422 Bellaire Boulevard, opened December 30. This is the second location for the kosher bakery which was first opened in 1975 by Ed Gavrila and Jay Kornhaber. In 1981, the duo opened New York Deli and Coffee Shop next door. A second New York Deli is currently under construction next to the new Bellaire location. It is slated to open in 2021.

The kosher-certified bagel and coffee shop will have Roshni Gurnani as its executive chef. Chef Rosh, as she is called, is a native Canadian of Indian descent who has made Houston her home for the past seven years. She was a winner on the Food Network's Chopped in 2009 and later was a contestant on Gordon Ramsay's Hell's Kitchen Season 10. She has worked in kitchens around the world including Thistle Marble Arch in London, The Sagamore Resort in New York and more recently, Hotel Derek in Houston. She will be accompanied by Adriana Soto, formerly executive chef at Ambrosia, as Kitchen Supervisor. Michael Saghian, part of the corporate ownership team, will serve as Bakery Manager.

The bakery is certified by Houston Kashruth (HKA) and Mehadrin Kashrus of Texas (MKT).  Customers will find an assortment of freshly made bagels. On the sweet side, there are choices such as banana nut, blueberry, oat bran and even chocolate. Savory options include plain, poppy seed, pumpernickel, jalapeno and challah. The regular bagels are $1.50 while a baker's dozen is a reasonable $15. The "cocktail" bagels, a little smaller version, are 90 cents each and $9.50 a dozen. There is a variety of coffee drinks, hot or iced, plus hot chocolate, hot tea and Brodies Iced Tea. The Standard is a handful.
Photo by The Bagel Shop Bakery staff
For more substantial fare, there are bagel sandwiches. We think the Falafel Burger sounds delicious with a fried falafel patty, house-made tzatziki, cucumbers, tomato and red onions on a whole wheat bun. There's also a Pastrami Salmon Reuben, Pizza Bagel and the Veggie Eddie with hummus and vegetables. For a sweeter treat, there's Deep Fried Blintzes and Challah French Toast Sticks. There's even a tribute to The King in the form of the Elvis Schmelvis, a cinnamon raisin bagel schmeared with creamy peanut butter and topped with banana slices and honey.

Beers on tap and outdoor space make for a great afternoon.
Photo by Keegan Lucas
Memorial Trail Ice House, 6202 Washington, opened December 12. The long awaited Memorial Park bar has been delayed due to the challenges of opening an alcohol-centric venture during the pandemic. The economic situation and restrictions have been extremely difficult for the hospitality industry as a whole but nearly fatal to bars and nightclubs.

The pros for Memorial Trail however, are its immense space in which patrons can socially distance and its 20,000 square foot backyard with a brick patio. The outdoor space offers plenty of room for canine companions, kids and lawn games. Its location next to Memorial Park offers joggers, dog walkers and stroller pushers a destination for rewarding themselves with a liquid refreshment.

Get comfy in Memorial Trail's backyard.
Photo by Keegan Lucas
While termed an icehouse, there is a full bar with a cocktail menu curated by Ladies of Libation. Kris Sowell and Laurie Harvey have been busy bees with their bar and beverage consulting business, developing beverage programs and cocktail menus in a number of new and current businesses. They have created an exclusive cocktail for Memorial Trail called Bee Someone, a play on Houston's "Be Someone" graffiti that regularly appears and disappears across Interstate 45. The cocktail is made with fizzy hopped mint, honey lemonade and Tito's Handmade Vodka. For each Bee Someone ordered, Tito's will donate $1 to Memorial Park Conservancy.

Most of the house cocktails range from $8 to $10 and include frozen options like the Frozie Rosie or the dreamsicle-inspired Crush City. It's made with orange vodka, citrus liqueurs and vanilla. Non-frozen options include a Raspberry Mule and the Walk on the Wild Side with mango, passion fruit and spicy tequila. There are eighteen beers on tap, a curated selection of wines and its "Picnic Packs" which offer a tallboy of selected beers or hard seltzer plus a paired shot. For example, guests can have a tallboy of Montucky Cold Snack with a shot of Infused Old Forester for $10.

Memorial Trail Ice House has "picnic packs".
Photo by Keegan Lucas
The ice house is located in the historic Juergen building built in 1932 by the Juergen family as a general store with the family's residence located above. CEO and founder of Memorial Trail Ice House, John Shaeffer, brought in Beverly Shaeffer for a laid back design and furnishings along with well-known designer and cookbook author Erin Hicks. The team worked to retain much of the historic character leaving the exposed brick walls and concrete floors.

Shaeffer says, "I have lived in the Rice Military neighborhood for five years now and absolutely fell in love with the Juergen building...This area needed a spacious, outdoor icehouse that brings a different experience than the bars and clubs along Washington Avenue."

The icehouse opened New Year's Eve with $100 bottles of Veuve Clicquot to ring in the New (and hopefully happier) Year. There is no in-house kitchen but there is a rotating line-up of local food trucks being brought in regularly.

The OG Burrito is a blend of Mexican and Korean flavors.
Photo by Ibrahim Halawa

The Spring truck is the third Coreanos for owner Mohammad Omar. There is one in San Antonio and another in Houston. The brand has been featured on Food Network's Unique Eats and Food Paradise.

The Kimbap offers a lot of flavor in a bowl.
Photo by Ibrahim Halawa
Coreanos, 5550 Val Verde, softly opened December 30 in the Galleria area, making the fourth location for the food truck right on the heels of the Spring opening.

Kanau Sushi, 2850 Fannin, opened softly December 18 with its first dinner reservations. The Japanese restaurant is helmed by sushi master, Mike Lim. Lim is known for his skills in Houston-area restaurants such as Roka Akor and most recently, Tobiuo Sushi in Katy. The restaurant will have a grand opening January 14, 2021, according to CultureMap Houston.

The location at Drewery Place gives Lim the opportunity to draw in the downtown crowd as well as the surrounding neighborhoods. He opened the restaurant in partnership with Vinh Nguyen, Harry Nguyen and Tony Le.

The menu is extensive and offers a number of cool and warm savory dishes, maki, sushi and sashimi, and an uni flight for lovers of the sea urchin. Kanau also offers an omakase but it must be ordered in advance. There are cocktails, wine and sake as well.

El Rey Taqueria, 207 W. Grand Parkway, is expected to open in January 2021. We have reached out for more information on a set opening date.

Morningstar, 4721 N. Main, closed December 28
Phat Kitchen, 2616 Blodgett, closed December 24
KEEP THE HOUSTON PRESS FREE... Since we started the Houston Press, it has been defined as the free, independent voice of Houston, and we'd like to keep it that way. With local media under siege, it's more important than ever for us to rally support behind funding our local journalism. You can help by participating in our "I Support" program, allowing us to keep offering readers access to our incisive coverage of local news, food and culture with no paywalls.
Make a one-time donation today for as little as $1.