Chicken and Biscuits will satisfy your sweet Southern soul. Photo by Kimberly Park
Dish Society, 712 Main, will open in the new Finn Hall December 3. This will make the fourth location of the Houston restaurant from founder Aaron Lyons. A fifth location will open January 21, 2019 in the Heights.

The Finn Hall venue will be a condensed version of the original Dish Society restaurants, but will still include farm to table favorites like fried chicken biscuits and 44 Farms chimichurri tacos. It will also serve as a test kitchen for new menu items. The beverage menu will include drip coffee, Maine Root sodas and Kickin' Kombucha, but will not have cocktails or alcohol. Adult beverages will be readily available from other Finn Hall vendors. The mimosa flight will be available at Dish Society in the Heights.
Photo by Dragana Harris
The Heights location will open at 1050 Yale in the Heights Central Station complex. The restaurant will have a "living room" game area with comfortable leather seating and bookshelves of board games. The Heights location will focus on its mission of " Eat Local. Be Social." with an ambitious bar program of craft cocktails, beer and wine. 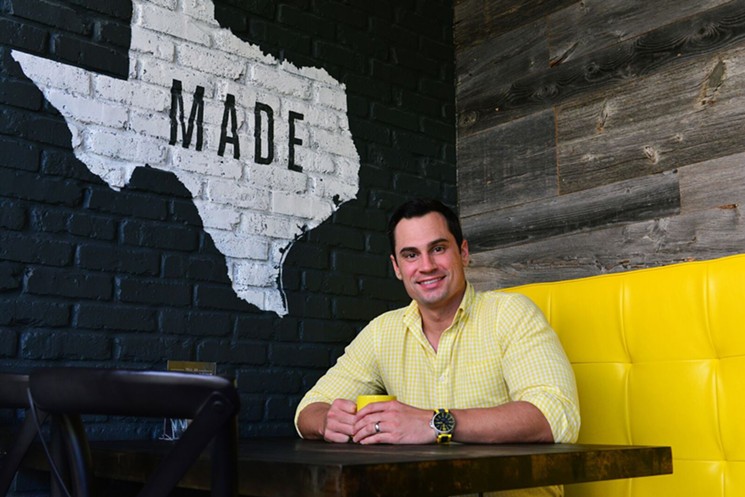 Aaron Lyons believes in balance in the restaurant biz.
Photo by Dragana Harris

Besides supporting local vendors and producers, Lyons has also made the work environment more progressive with benefits such as medical, dental and vision insurance and balanced lifestyle incentives such as paid time for volunteer work. According to Lyons, " This industry is grueling and can kick the crap out of you...I want everyone on our team to take care of themselves outside of work and find a balance..."

A job fair burger bash will be held at the Heights location December 1 from 12 p.m. to 5 p.m. with free burgers, beer and music. There will also be hiring events every Thursday and Friday from 11 a.m. to 3 p.m., beginning December 6 for those who wish to apply in person. Bring a resume and find some balance. Folks in Richmond braved the cold for free chicken fingers.
Photo courtesy of Raising Cane's
Raising Cane's, 10215 West Grand Parkway, opened November 27 with a ribbon cutting, festivities and a drawing for a year's worth of Cane's given to the "Lucky 20" entries. Two other locations will open in the next week at 15231 Wallisville Road in East Houston on November 30 and at 1640 W. Bay Area Boulevard in Friendswood on December 4. Caniacs are on the sauce.
Photo courtesy of Raising Cane's
As with the Richmond opening, there will be drawings for free food for customers 13 years and older plus the first 100 customers who purchase a a combo meal will receive a free Cane's T-shirt and a voucher for a free box combo for a later visit. Raising Cane's is known for its " One Love" chicken finger meals and its secret recipe Cane's sauce. The chain began in 1996 in Baton Rouge, Louisiana and is named for founder Todd Graves' yellow labrador, who has since gone over the rainbow bridge, but has been honored with a subsequent yellow lab mascot in recent years.

Raising Cane's is also bringing plenty of job opportunities to the Houston area with each new store hiring 75 employees.

Neyow's Creole Cafe, 6356 Richmond will begin its soft opening December 2 with a grand opening December 7, according to Eater Houston. The restaurant's original location started in New Orleans in 2010 before moving to a larger space in 2016. Now, it's coming to our bayou city which became home to many New Orleans evacuees from Hurricane Katrina. The pining of New Orleans ex-pats for Creole cuisine is one of the reasons that the Dubuclets chose Houston for its second restaurant.

We Houstonians have a soft spot in our hearts for the fine people and delicious cuisine coming from our slightly naughty Louisiana cousin. Both cities have seen more than their fair share of hurricanes and flooding. Food is always a great comfort in hard times and a Bow Wow punch from Neyow's is also a great way to cure the blues.

Owners Tanya and Timothy Dubuclet use many of her grandmother's recipes and diners are having a party in their mouths with dishes like red beans and rice and, of course, file gumbo. Crab claws, boudin balls and char-grilled oysters round out the menu, along with home cooking like cabbage and fried chicken. 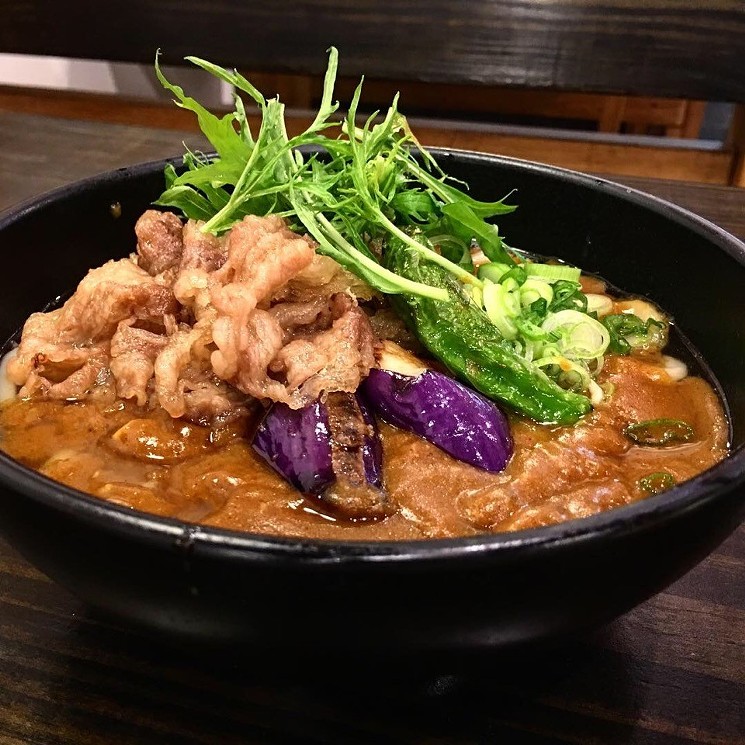 While each of the restaurants offers various Asian cuisines, Ishin Udon, will offer traditional udon and Japanese curry along with udon inspired by Italian dishes like seafood puttanesca and carbonara. There will be a Tan Tan udon with spicy minced pork, crushed peanuts and Japanese mustard greens, according to CultureMap Houston.

The restaurant will open for dinner with a lunch service in the coming weeks.

The Brass Tap, 922 Holman, is expected to open December 3. The beer-focused chain out of Florida has several stores in the Dallas/Fort Worth area, but this is the first location for Houston. Expect a lot of Texas crafts and drafts plus beer-friendly food like pretzels, tacos and sliders.

Irma's Southwest, 1475 Texas, opened November 26, according to the Houston Chronicle. The restaurant comes from Louis and Patricia Galvan. Louis is the son of Irma Galvan who began the Original Irma's. The new outpost  is located in a luxury apartment building and the modern and contemporary decor reflects its new digs.

Irma's Southwest will offer of the traditional items served at the Original Irma's, including favorites like the chicken mole poblano and blackened salmon tacos, but will also feature new dishes like house-made tamales with queso fresco and a number of new vegetable offerings. 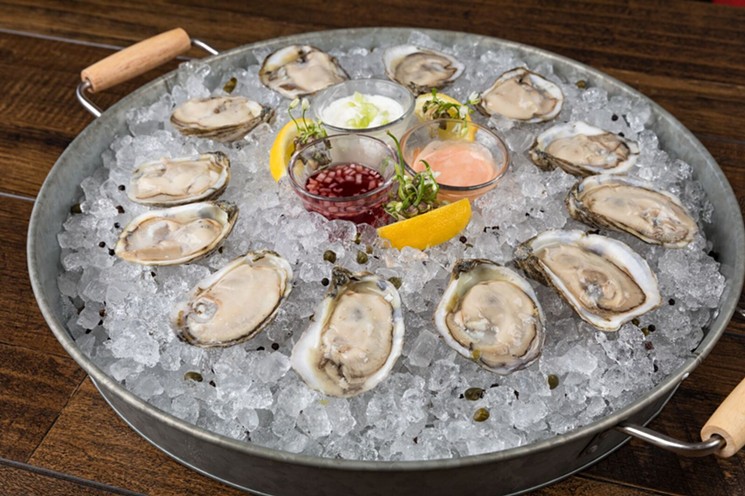 Low Tide will offer seafood and a raw bar at Finn Hall.
Photo courtesy of Finn Hall
Finn Hall, 712 Main, will open December 3, as we reported here in the Houston Press. Many popular Houston restaurants will have food stalls in the new venue, including Mala Sichuan with its spicy Chinese cuisine and Goode Co. Taqueria. There will be some new-to-Houston places like Mr. Nice Pie, a pizza shop. Oddball Eats, which operates currently as a food truck,  will serve all things falafel from siblings Rani and Rene Francis. The team from Harold's Restaurant and Tap Room will be operating Low Tide, a seafood restaurant and raw bar in the food hall.

You don't have to be an oddball to enjoy Oddball Eats.
Photo courtesy of Finn Hall
Other vendors include Sit Lo which offers Vietnamese street food and off-menu regional dishes and Amaya Coffee. Yong, from chef Daniel Ajtai of La Grange and Cottonwood, will feature Korean recipes from his mother such as her twelve-ingredient egg rolls plus jumbo wings and double-fried chicken.

If you need an excuse to miss work this Monday, Finn Hall is where the foodie action will be.

Closings Reported in November:
Bud's Pitmaster BBQ. 1001 Avenida De Las Americas, closed October 25
The Harp, 1625 Richmond, closed November 11
Howie's Tiki, 4334 FM 2920, closed November 3
Kitchen 713, 4601 Washington, closed October 28
Presidio, 911 W. 11th, temporarily closed due to fire damage
1308 El Tiempo Cantina, 1308 Montrose, closed November 11
KEEP THE HOUSTON PRESS FREE... Since we started the Houston Press, it has been defined as the free, independent voice of Houston, and we'd like to keep it that way. With local media under siege, it's more important than ever for us to rally support behind funding our local journalism. You can help by participating in our "I Support" program, allowing us to keep offering readers access to our incisive coverage of local news, food and culture with no paywalls.
Make a one-time donation today for as little as $1.