Truly Texas Mexican Showcases the Food of the Texas Borderland

Adán Medrano, executive producer and narrator, in the opening scene of Truly Texas Mexican Photo by Gabriel Bendahan
Houston's own Adán Medrano has a 90-minute documentary out this week that showcases Texas borderland cuisine — a type of cooking he says has been "misunderstood and erased." 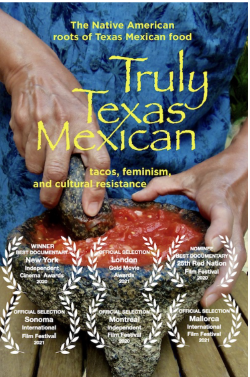 This isn't Tex-Mex but the comida casera or the home cooking of many Texas Mexican American families, says executive producer Medrano, who occasionally writes about food for the Houston Press. Truly Texas Mexican begins with San Antonio's "Chili Queens" who in the 1880s made the city a food destination for tourists.

According to a press release about the documentary:

Racism and discrimination closed down their businesses, and the film proceeds to show contemporary women chefs in kitchens and restaurants following in their footsteps, not just preserving but advancing the native culinary traditions.


Also, director Aníbal Capoano and cinematographer Gabriel Bendahan, both from Uruguay, filmed the practice of buying a cow's head in the ground for overnight cooking. "Women took the lead in keeping traditions alive and it’s really about resistance to colonization,” said Virginia Diaz-Laughlin, the producer, who lives in Houston

Adán Medrano and Christine Ortega prep the “cabeza de pozo,” a cow’s head that will cook in a backyard hole-in-the-ground earth oven overnight.
Photo by Virginia Diaz-Laughlin
Truly Texas Mexican can be seen on Amazon, Apple TV and Google TV.
KEEP THE HOUSTON PRESS FREE... Since we started the Houston Press, it has been defined as the free, independent voice of Houston, and we'd like to keep it that way. With local media under siege, it's more important than ever for us to rally support behind funding our local journalism. You can help by participating in our "I Support" program, allowing us to keep offering readers access to our incisive coverage of local news, food and culture with no paywalls.
Make a one-time donation today for as little as $1.