Simit & Poacha Brings a Taste of Turkey to Houston From top, clockwise: a Nutella achma, tahini pastry, mozzarella poacha, walnut baklava, and a chocolate-raisin pastry. Photo by Erika Kwee
When I visited Istanbul in 2016 with some friends, we essentially ate our way through the city. Our Turkish classmate introduced us to Turkish breakfast, featuring strong black tea, mild cheese, olives and tomato-y menemen; we ate warm, elastic gözleme, spinach-stuffed hunks of borek, and thin pizza-esque lahmacun. After we returned, I kept an eye out for Turkish food around Houston—Phoenicia's dense, sweet baklava was an acceptable proxy for dessert, but many other dishes that we'd sampled were few and far between.

So when I happened upon a Instagram image featuring the round, sesame-studded bread called simit that I remembered fondly from Istanbul, I immediately investigated the location—it came from a bakery called Simit & Poacha that I later discovered had opened in May of 2017. 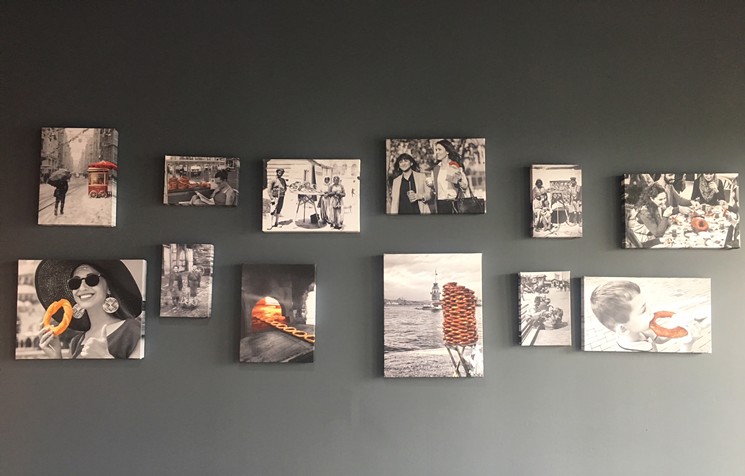 Simit, as my Turkish classmate Beste, told us, is like the Turkish bagel. Just like New York bagel hawkers, we saw vendors selling simit from many of the street corners in Istanbul. You could buy it plain, or split and spread thickly with Nutella. Along the wall of the bakery, there is a gallery of photos featuring simit—they're nearly all black and white save for bright golden-orange spheres. In one photo, a long tray of bread is being fed into a glowing oven; in another, a child nibbles on a round nearly the size of his head.

Simit & Poacha owner Ercu Lambet notes that their namesake bread is technically "harder than a bagel, but softer than a pretzel." “We love food. We’ve always loved making dough and pastry; it’s relaxing for us,” says Ercu of him and his wife, Ishil. “We knew we wanted a lifestyle that would allow us to spend time with our kids at night, and we always dreamed of opening a bakery.”

Both Ercu and Ishil come from hotel management backgrounds, and from culinary arts before that. They first came to Houston in 1995, where they received their initial culinary training. They considered opening a bakery at that point, but eventually decided to return to Izmir, Turkey in 2005, where they took additional classes and further honed their skills in traditional baking through jobs at local bakeries. From the counter, you can see through an open door into the kitchen where all the pastries are made from-scratch daily.
Photo by Erika Kwee
click to enlarge Items like the feta-jalapeno simit add just a touch of American flair.
Photo by Erika Kwee
Once they returned to Houston, they decided to make the leap. “We missed this food; we could not find it anywhere,” says Ercu. “It took us 60 days to correct the recipes and find the right ingredients. We are using old traditional culture recipes. Home-style recipes, not restaurant style.

Even as they keep to traditional Turkish baking, they still add some U.S. flair—for example, adding jalapeno to a salami and mozzarella poacha, which is a salty dough that typically comes filled with either cheese or meat. 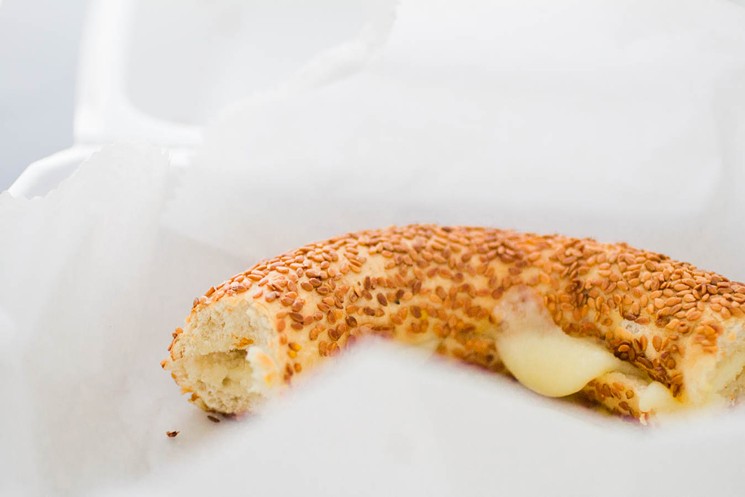 Simit with mozzarella and cheese.
Photo by Erika Kwee

At the bakery, you can order simit with a fresh cracked egg and optional additions of mozzarella, feta, salami or soujouk (a type of dry, spicy sausage). Mine came with a thin film of egg cooked in the center of the simit—the yolk still perfectly jiggly—reinforced by a layer of melted mozzarella that was perfectly engulfed in the bready, sesame-studded bread. This egg and cheese creation is also an American touch, a combination you won’t find in Turkey.

The team makes it a point to use unbromated, unbleached flour in all of the pastries. Standing at the pastry counter, you can even see through an open door to the kitchen where you can see pastry chefs preparing various pastries—everything is handmade on site daily.

“If we can’t make it here, we don’t offer it. Even our phyllo dough is made by hand—we use the old fashioned way with wooden sticks,” says Ercu. 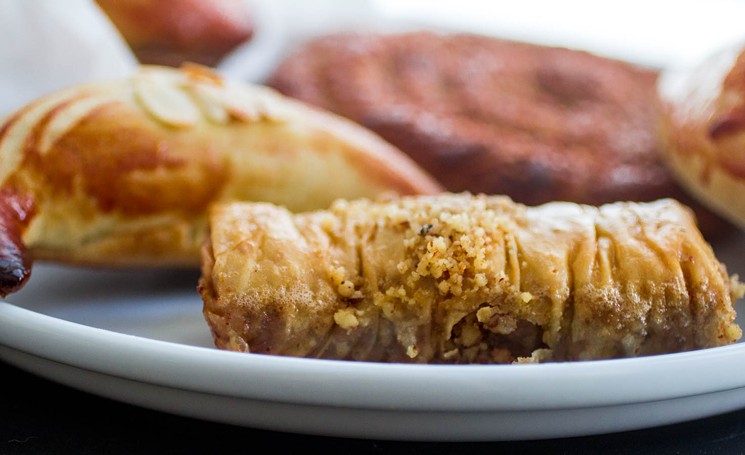 If you've ever watched the episode of The Great British Baking Show, you know homemade phyllo is no small feat. Does their baklava taste better for it? Possibly. On the day I visited, they offered two types of baklava: thick slabs of walnut baklava and triangles of pistachio baklava, which I was informed contained “buttercream” in the middle (as a kind of moistening mechanism for all the ground pistachio). Both were soaked in syrup, a hallmark of Turkish baklava that differentiates it from Greek baklava, which is generally less syrupy. The sensation of biting into the thick slab of walnut baklava with syrup penetrating the layers of crispy phyllo, generous amount of crushed walnuts was veritably juicy. 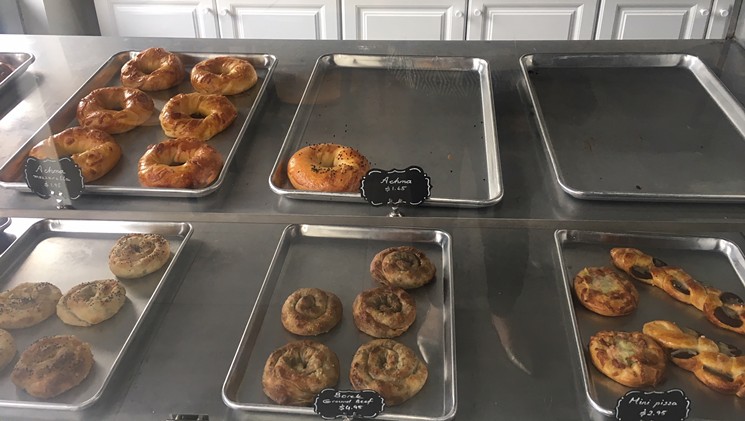 The bakery offers a wide range of Mediterranean-inspired pastries.
Photo by Erika Kwee
But aside from baklava, there were few other pastries that I recognized by name. There was a kind of generic looking bun, for example, that's called achma. It's a fluffy, soft, plain dough that can be made either savory or sweet—the Nutella-stuffed achma is one of their best-sellers. Another popular item is the mozzarella poacha—with its lacquered exterior, exquisitely close crumb, and gap of fragrant cheese in the center, it was one of my favorites, and it somehow reminded me of the cheese rolls my Indonesian grandmother used to make.

There was also a crescent of firmer pastry closer to shortbread that enclosed fillings of either chocolate and raisin or apples, and tahini swirl pastries the size of my hand. On Instagram, you can watch a video of a woman spreading pools of tahini over thin circles of pastry before being rolled up into a tube and shaped into gorgeous spirals that are rich and dense with sesame paste. They also offer halal meat pies. 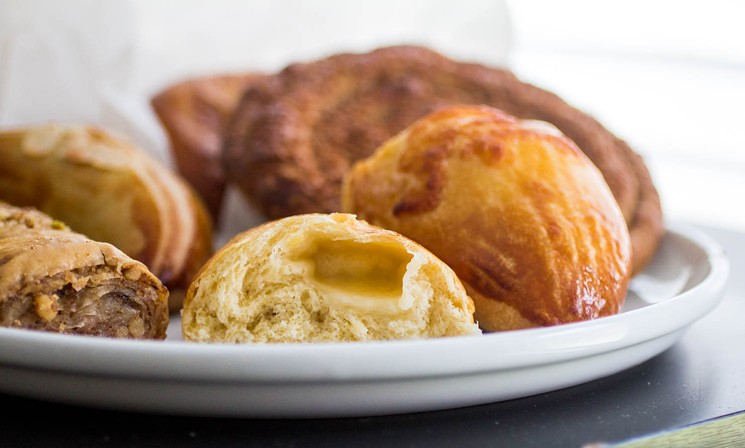 The mozzarella poacha is one of their most popular items.
Photo by Erika Kwee

When holidays roll around, seasonal items are occasionally offered—for Ramadan, they offered a special round of pide—last Halloween, they made a traditional Balkan dessert that incorporated pumpkin.

Ercu and Ishil still make a point to bake, taste and touch the dough whenever possible. Their current team of eight people is rapidly expanding—they hope to soon open more locations in the Greenway and Kirby area, as well as Downtown and The Woodlands.

I can't wait until they do, because whether or not you're familiar with Turkish baking, their shop is a pastry lover's delight.

Simit & Poacha is located at 12315 Westheimer and is open until 4 p.m. every day. Check the website for more information.
KEEP THE HOUSTON PRESS FREE... Since we started the Houston Press, it has been defined as the free, independent voice of Houston, and we'd like to keep it that way. With local media under siege, it's more important than ever for us to rally support behind funding our local journalism. You can help by participating in our "I Support" program, allowing us to keep offering readers access to our incisive coverage of local news, food and culture with no paywalls.
Make a one-time donation today for as little as $1.