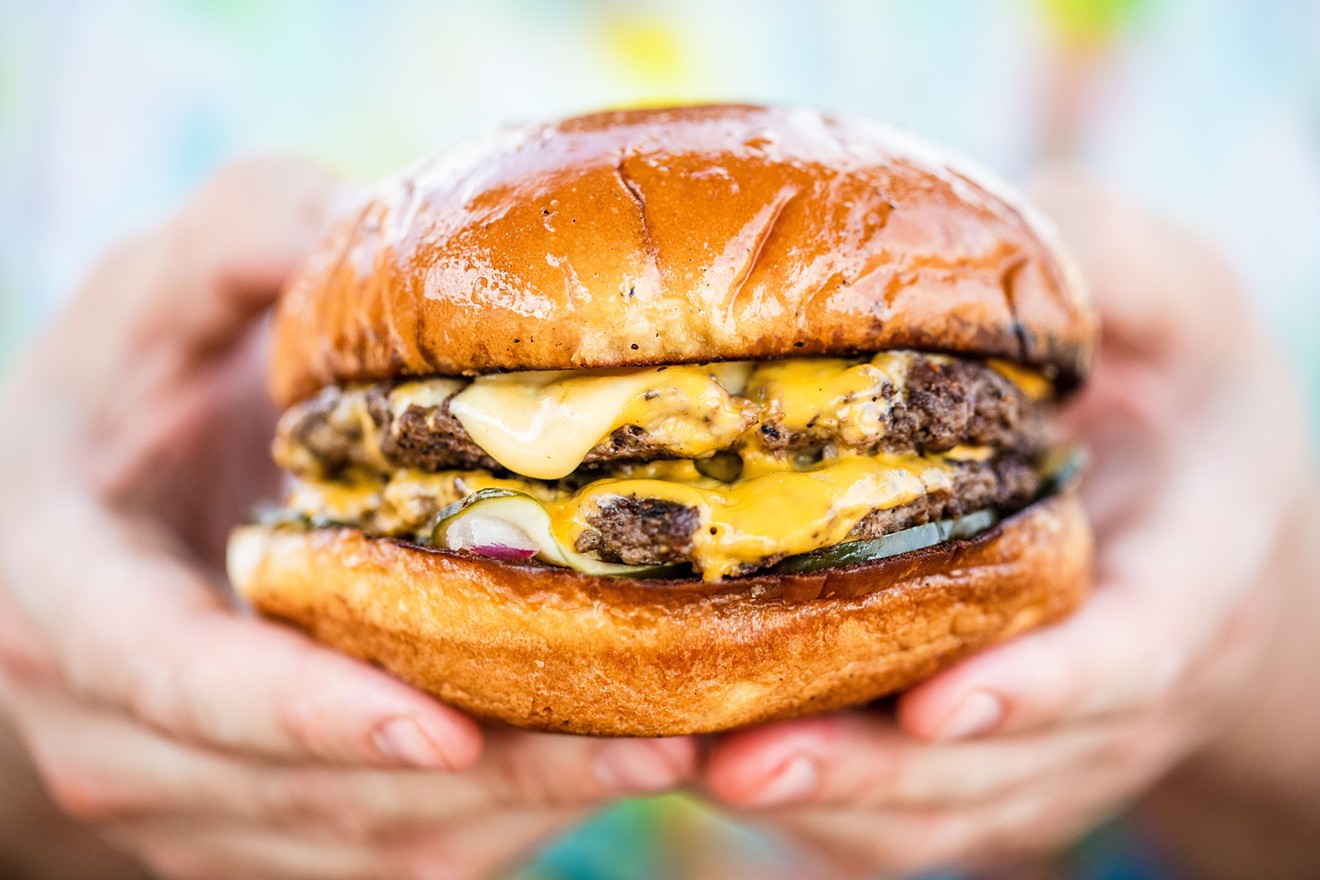 The Wonderburger was on the forefront of the smashburger craze in Houston. Photo by Becca Wright
Eatsie Boys, 2202 Dallas, will close at the end of December. The "Intergalactic" food truck was founded in 2010 by executive chef Matt Marcus, Ryan Soroka and Alex Vassilakidis. Its menu items often paid tribute to 1980s hip hop group, the Beastie Boys, with items like the Sabotage sandwich made with Big Daddy Karne's pulled pork and braised collard greens. It sandwiches blended international flavors with offerings like the Chicken Shazam with grilled chicken, feta, avocado and tomato on ciabatta bread plus a cheesesteak, No Sleep Til Philly, available with beef or chicken and topped with 8th Wonder Brewery Cheese Sauce.

And 8th Wonder Brewery is where Eatsie Boys made its permanent home after operating as a brick and mortar from 2013 to 2015. Marcus, Soroka and Vassilakidis joined with brewmaster Aaron Corsi in 2013 to form the brewery which has become one of Houston's better known local beer purveyors. Marcus plans to continue his involvement with 8th Wonder and the Eatsie Boys brand may have a future iteration in the works. Eatsie Boys served crave-worthy loaded fries.
Photo by Becca Wright
The reason for the closing of the food truck is a cocktail of supply chain issues, staffing challenges and other pandemic-related concerns, according to the founders. Marcus says the fact that it had lasted so long was a dream come true. "Serving thousands of people over the years and seeing that immediate gratification, the unique way you can when you're serving food from a truck-it's been amazing." Marcus added that he's looking forward and is excited to see what could be next.

James McGhee goes from frozen daiquiris to fine dining.
Photo by Adrian Verde
Juliet, 5857 Westheimer, is expected to open in early 2022. The high-energy modern American restaurant comes from James McGhee, founder of Candy Shack Daiquiris, which has grown to 10 locations in six years with two more on the way. McGhee got the idea after visiting family in New Orleans where daiquiris are a popular beverage. In 2015, he opened the first location in Houston and created a following of fans who loved the addition of gummy candies to the colorful cocktails. A franchised location recently opened in Missouri City this past November and at least two more are planned for 2022 in Pearland and Conroe.

McGhee's new concept Juliet will be more on the upscale side of dining. The restaurant will have nearly 5,000 square feet of space with seating for 220 diners, including the bar, lounge, dining room and large outdoor space plus a VIP room that holds nearly 40 guests. It will will feature a movie theatre-like entrance with the feel of a speakeasy while guests can relax on the patio as a large screen plays popular films from the 80s and 90s.

The menu at Juliet has not been fully disclosed but a look at its website shows starters such as Crispy Korean Short Rib Tacos and Jumbo Lump Crab & Avocado Stack. Mains include Spinach Black Risotto and Whitefish Fillet and Mussels Stew. Local cocktail specialists Laurie Harvey and Kris Sowell, owners of Ladies of Libation, have created a specialty bar program.

Architect Jim Herd of Collaborative Projects is in charge of the design and Jeff Auld, who has worked at popular restaurants in Chicago, St. Louis, Washington, D.C., Las Vegas and Houston is Director of Operations. Go is in its name but you can stop and relax, too, at Common Bond On-The-Go.
Photo by Andrew Hemingway
Common Bond On-The-Go, 2850 Fannin, opened December 18 at Drewery Place, a 27-story high rise from Australian developer, Caydon. It was quickly followed by another location at 2229 San Felipe, which opened December 20 in River Oaks. Unlike previous stores, the two newest locations do not have drive-thru service. The Texas Club Croissant is a hearty sandwich.
Photo by Andrew Hemingway
The Drewery Place location is the fourth for Common Bond's On-The-Go concept and features 2,000 square feet of space for dining in or grabbing pastries, coffees and sandwiches to go. Guests can also relax on site with a beer, glass of wine or a Common Bond frose. The Midtown location is open daily from 7 a.m. to 6 p.m.

The River Oaks spot occupies 1,440 square feet of space at San Felipe Place, a 17-story boutique office building. It too offers the grab 'n go savory menu, breakfast bites, sandwiches and salad bowls as well as croissants and desserts. It is open Monday through Friday from 7 a.m. to 6 p.m. 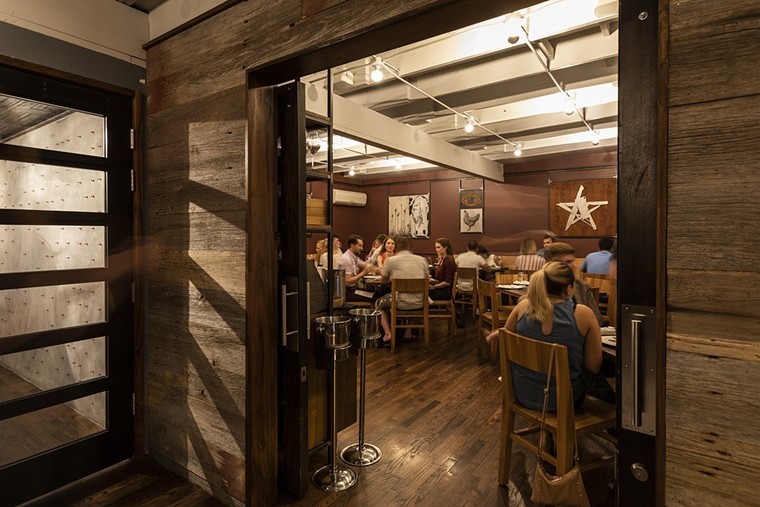 UB Preserv has closed for good.
Photo by Julie Soefer
UB Preserv, 1609 Westheimer, had its last day of service December 21, two days ahead of its scheduled December 23 closing due to the Omicron surge. It was announced recently that the restaurant would close and be replaced in January 2022 with a new Underbelly Hospitality concept, Everlong Bar and Hideaway, as we reported here in the Houston Press. Renovations on the space may take a little longer than expected and a spokesperson told the Press that Everlong is looking to open at the end of February 2022.

The Facebook post regarding the earlier-than-scheduled closing at UB Preserv says, "We made this decision for the safety of our staff and guests and for the fact that we would not be able to execute the way we would want to honor the legacy of this restaurant."

Miri's Kitchen Persian, 5801 Memorial, is currently in soft opening stage. The restaurant will have a grand opening sometime in mid-January, according to Houston Business Journal. Owner Parvaneh Miri is known for being the head chef at Garson, another Persian restaurant, and has decades of experience in the hospitality industry.

Starters include hummus and eggplant dip and there is a variety of kebabs including rack of lamb, filet, shrimp and the ribeye and ground beef combination. There are chicken kebabs as well as Eggplant and Chicken Stew. There is a section of the menu devoted to vegan options like a Beyond beef kebab and rice dishes with raisins and nuts plus desserts such as Persian ice cream and baghlava. 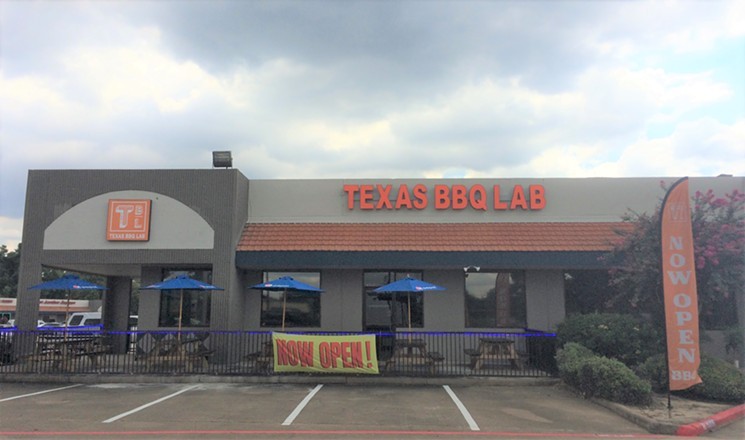 Unfortunately, it's now closed.
Photo by Lorretta Ruggiero
The Texas BBQ Lab, 13251 Jones, has shuttered. The barbecue restaurant first opened in June 2021 at the Cypress location after having operated briefly next to a gas station on Grant Road. It seemed to be doing a fair amount of business, sometimes selling out of popular items., as recently as Thanksgiving. It served eastern Carolinian whole hog barbecue as well as Texas-style brisket. We have attempted to reach the owners but have not received any response. 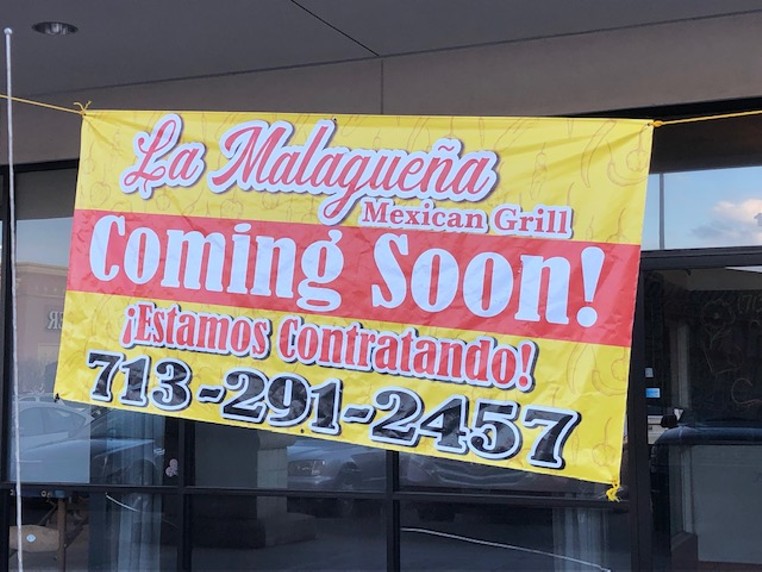 It's still a mystery.
Photo by Bob Ruggiero
La Malaguena is coming soon to the 1200 block of Jones Road. That's all we know.

We unfortunately have a list this week of temporary closures due to the recent surge in COVID cases and the variant Omicron. And we all know why we're at this point again. Many Americans refuse to get vaccinated with just a little less than 62 percent having received the first two shots as of this month. And some of those people waited for many months to do so.

Personally, we don't care what the excuses are. Perhaps they believe it will cause them to grow an extra arm or eye. We wish it did. That would be quite useful. Maybe they thought it was a hoax originally and are going to die on that hilltop and take as many people with them as they can.

For over a year, we've listened to the rants about "the scared sheep should stay home". Well, here's an idea: Why don't the unvaccinated stay home and let the rest of us science-believing folks go back to our normal lives?

Please note that these closures are temporary measures being taken by owners, managers and staff out of precaution. Because that's where we are. Again.

Davis St. at Hermann Park, 5925 Almeda, made the announcement December 21 that it was closing to ensure that all necessary precautions were being taken to keep its staff and customers safe. It will announce soon when it will reopen. 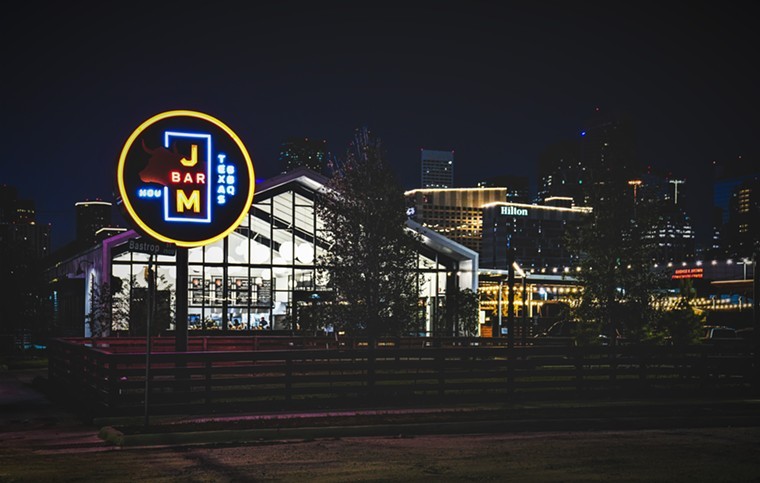 J-Bar-M will reopen December 28.
Photo by Robert J. Lerma
J-Bar-M Barbecue, 2201 Leeland, will reopen December 28 after closing December 21 due to some staff members who tested positive for COVID. Though it will not take to-go orders until it reopens, it is contacting customers who have existing pre-orders for the holidays and will ensure that the orders are filled safely.

The restaurant just opened for lunch November 11 and added a Friday and Saturday dinner service December 3.

93 Til, 1601 W. Main, announced a brief closure December 23 on Facebook saying it will reevaluate its opening December 28.

Nobie's, 2048 Colquitt, chose to close early December 19 and will reopen as scheduled December 28 as a precautionary measure due to the surge in Omicron cases.

Squable, 632 W. 19th, announced that there were breakthrough cases among their vaccinated staff and closed December 17. It will reopen when the owners and management deem it safe to do so.
KEEP THE HOUSTON PRESS FREE... Since we started the Houston Press, it has been defined as the free, independent voice of Houston, and we'd like to keep it that way. With local media under siege, it's more important than ever for us to rally support behind funding our local journalism. You can help by participating in our "I Support" program, allowing us to keep offering readers access to our incisive coverage of local news, food and culture with no paywalls.
Make a one-time donation today for as little as $1.