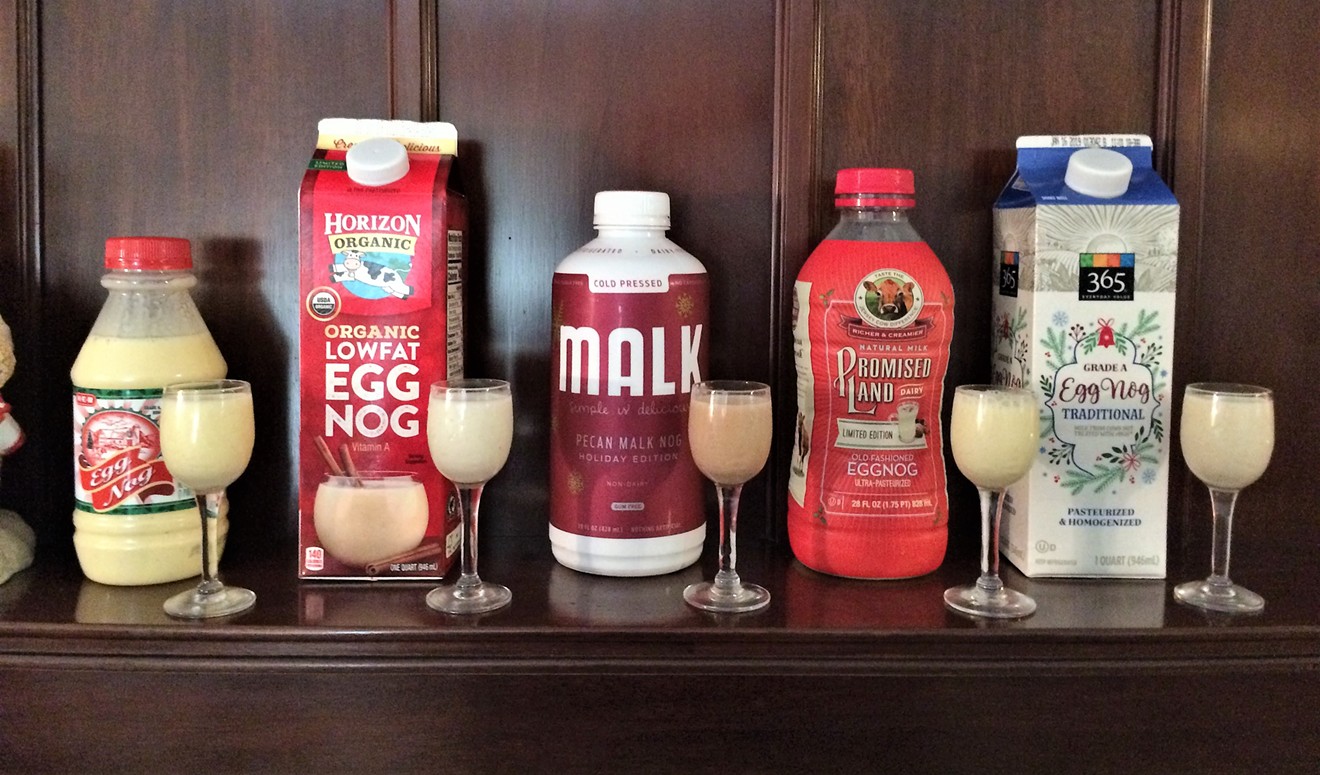 Which egg nog will be your favorite? Photo by Lorretta Ruggiero
It's the most wonderful and stressful time of the year. Some of us have already put up the tree, sent out our cards and wrapped gifts. Others are scrambling to find the perfect gift for crabby Aunt Bertha or wading through a mountain of junk in the garage to find the ornaments. Maybe you can't take your family Christmas photo until little Jimmy's giant pimple fades. It's enough to make a body reach for the bourbon. We suggest cutting the bourbon with a bit of eggnog to lure your soul into a holiday mood.

Some folks love eggnog, others find it a cloying, creamy mess. The arrival of different holiday nogs in the dairy section of the local grocery store is a sign that Christmas is on its way and you can no longer live in denial. Hanukkah is half over already. Go with it. Buy a quart or two, some booze if you like, and let the holidays begin.

Photo by Lorretta Ruggiero
For the Martha Stewarts of the world, the only true eggnog is homemade, with frothy egg whites and custardy yolks. Even my East Texas Granny made her own nog, though she was decidedly not Martha Stewart. She'd bring it in gallon jugs, pour it into a punch bowl and add the whiskey. My granny however, grew up in the Depression, so refrigeration was an afterthought to her. She always thawed meat overnight on the counter. So, when she made her nog with raw eggs, it was a bit of a crap shoot health-wise. Fortunately, we never ended up shooting crap the next day, so the homemade deliciousness was worth the gamble.

For those unwilling to risk tummy troubles with homemade eggnog, the grocery stores offer a variety of nogs to suit tastes and diets. While low-fat eggnog is a travesty to most, many people are trying to moderate their holiday cheer intake. We tried some vegan options for those who still need some nog without the dairy. I drank seven different store-bought versions, so if you see me waddling around town, blame it on the nog. Or the booze. I had to draw the line somewhere and that line was pumpkin nog. I just couldn't do it.

These are the results of our grocery store eggnog tasting. You may disagree and that's okay. Some people prefer a thick, milky nog, others need some serious spice. In fact, why not have an eggnog tasting of your own? Bring out your vintage bar ware or your grandmother's Spode china Christmas mugs and make it a party. Since your friends and family may have different preferences when it comes to which liquor to add, have a few options available. I like brandy, my uncle prefers rum and my friends love bourbon. I usually purchase little 'airplane' bottles of different brands at the liquor store and put them out for my guests. There's just something festive about the miniature bottles. Plus, they are already pre-portioned, so it prevents the heavy-handed pours of some of your party peeps.

Photo by Lorretta Ruggiero
Here's a list of the ones we tried, from best to not-so-best:

Promised Land Old-Fashioned Eggnog: Anyone who loves milk loves Promised Land products. Its Midnight Chocolate milk made a convert out of me, even though I don't like chocolate milk. The creamy, yellow milk from Jersey cows is preferred by connoisseurs like my friend, Big-Haired Kim. That creaminess comes forth in its eggnog, slightly coating the tongue and giving a nice hint of nutmeg. This one is good on its own or spiked with liquor. It does have egg yolks in it, but the fat content isn't out of this world. Just remember: A serving is 1/2 cup when it comes to eggnog.

H-E-B Eggnog: This one surprised me. Personally, I think the Kroger brand egg nog is doable, but not great. The H-E-B store brand, as one taster said, "tastes like a cookie". Unfortunately, that flavor may be due to the high fructose corn syrup. However, the first three ingredients are milk, cream and skim milk, so it delivers on the creaminess. Points off for the artificial flavors.

365 Everyday Value Traditional Egg Nog: The smell of this Whole Foods brand threw me off. One sip and I knew why. Of all the nogs I tasted, this was the only one with ginger, cloves, cinnamon and nutmeg. This one is probably closer to what the American colonists would have drunk. without the guar gum. The ginger really comes through, so some people may be turned off by that, others turned on. You nog your way.

Here's to you, Big Bob.
Photo by Lorretta Ruggiero
Borden Premium Egg Nog: This one was the favorite of my late father-in-law. He was pretty set in his ways brand-wise. Charmin toilet paper, Blue Bell ice cream and Borden's egg nog. With all due respect to Big Bob, I found this was a bit on the thick side and it lists no spices, which makes it taste like melted ice cream rather than eggnog. Knowing how much Big Bob liked his ice cream, his fondness for this brand makes perfect sense. So, a toast to Big Bob with his Borden's and a whole lot of brandy to make it go down easier.

Horizon Organic Low Fat Egg Nog: I actually would put the taste of this a bit higher, but it lacked creaminess. With three grams of fat versus the nine or ten grams in the other ones, it's definitely less strain on the belt buckle. It also did not have guar gum like most manufactured egg nogs. It instead uses locust bean gum and gellan gum. Most of these gums are added as thickeners. The flavor of the nutmeg gives this low-fat version some zip.

Non-milk drinkers can nog, too.
Photo by Lorretta Ruggiero
Blue Diamond Almond Breeze Nog: For people who cannot or do not drink milk, the almond milk version isn't terrible, but it's also not that good. I found it way too sweet. This would need a liquor without any sweetness to balance the sugary taste of this nog. It does have some nice spice. It uses sunflower lecithin instead of soy.

MALK Pecan Malk Nog: I wanted to like this one because it is made locally by August Vega and her brother and cousin. Pecans are one of my most favorite things in the world and the taste of pecans is very strong in this beverage, but it is watery and bitter. It reminded me of coffee. In fact, I zapped it in the microwave and liked it better that way. The label says that the product is never heated, so I probably killed off some nutrition and good microbes by doing so. Many people drink nut-based milks due to allergies and other food issues and this is a healthy milk alternative. It is made with organic sprouted pecans, organic spices and smells delicious. This is not my kind of nog, but it's an option for vegans and people who are lactose-intolerant.

Unwind with some nog and whipped cream.
Photo by Lorretta Ruggiero
So there's our list, which is certainly not exhaustive. There are plenty of other brands to try out there, but my elastic is fit to burst as it is. You can try your hand at making eggnog yourself or just buy a quart and doll it up with some whipped cream, grated nutmeg and a cinnamon stick. Or experiment. Try making a white Russian eggnog with Kahlua and vodka. Put on some Andy Williams and curl up in front of the fire. Forget about the calories. Forget about the to-do list. Forget about Aunt Bertha's gift. It's time for egg noggin' and maybe a little snoggin'.

Urban Eats has a cherry bourbon eggnog with your name on it.
Photo by Urban Eats
Look for our upcoming story on eggnog cocktails around town. Some of Houston's best restaurants and bars have created yummy eggnog beverages using family recipes and creative mixology. The photos will make you drool.
KEEP THE HOUSTON PRESS FREE... Since we started the Houston Press, it has been defined as the free, independent voice of Houston, and we'd like to keep it that way. With local media under siege, it's more important than ever for us to rally support behind funding our local journalism. You can help by participating in our "I Support" program, allowing us to keep offering readers access to our incisive coverage of local news, food and culture with no paywalls.
Make a one-time donation today for as little as $1.