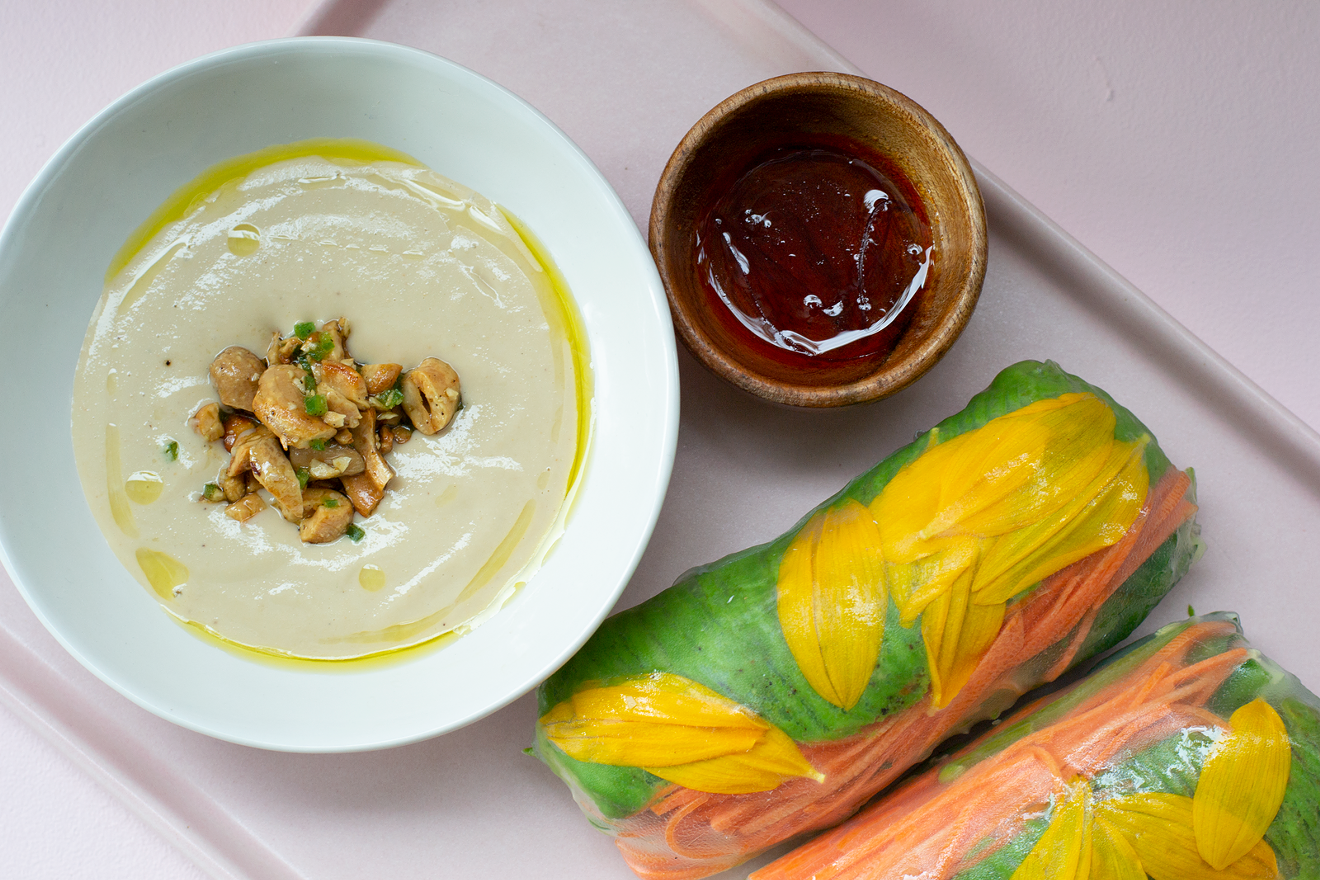 Healthy and colorful food will be the theme at Satisfy. Photo by Shannon Smith 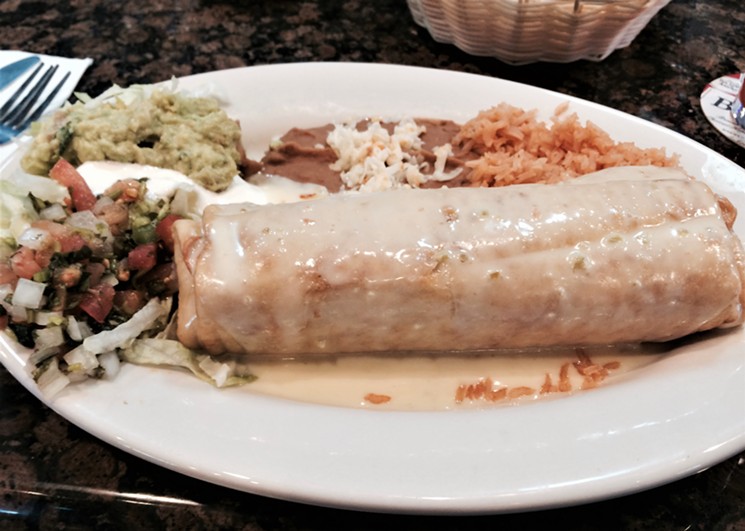 Get the chimi with queso for an extra fifty cents.
Photo by Lorretta Ruggiero

El Capitan Seafood and Mexican Grill, 17519 N. Gessner, opened early January. This is the second location. The original is in Hobart, Indiana.

The restaurant offers traditional Mexican cuisine along with seafood boils and other dishes inspired by the Mexican coast. Expect menu prices at dinner to be a bit above the typical Houston offerings with the house margaritas running $7.99 for a small and $12.99 for a large. Dinner prices are in the $15 to $20 range for Mexican platters and upwards for seafood choices. Micheladas are a big seller and the beer prices are good. The lunch menu has plates for around $10. 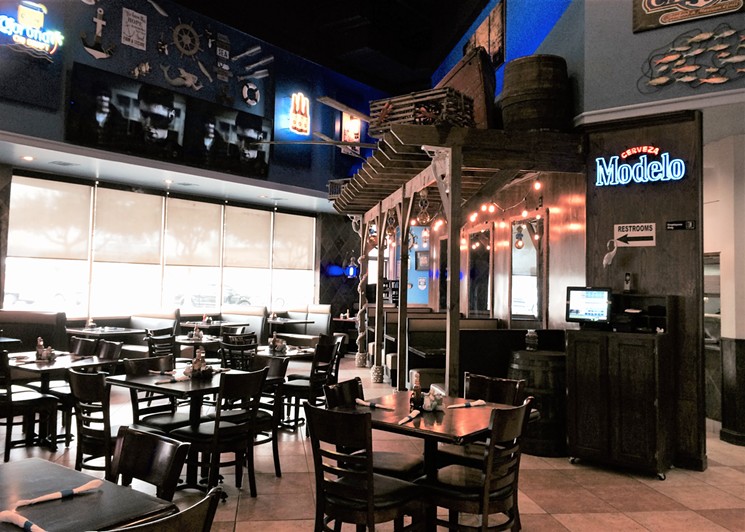 El Capitan has a casual vibe for shrimp-peeling and crab-shucking.
Photo by Lorretta Ruggiero
We had a first look this week. The restaurant is open and casual, with almost a sports bar feel with five large television screens hanging over the bar. The service was good and the chimichanga was decent, but the cocktails and the salsa could both use a little kick. If you bring your salsa to Houston, it had better be worthy. We know our salsas. 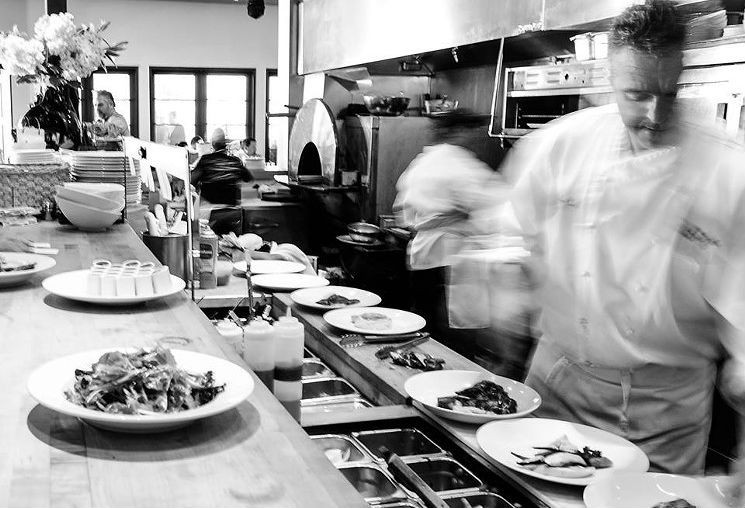 Chef Charles Clark working the line at Ibiza.
Photo by Debora Smail
Ibiza Food and Wine Bar, 2450 Louisiana, will close its doors February 15, as we reported here in the Houston Press in August. The Spain-inspired restaurant, known for its reasonable wine prices and European flair, opened in 2001. Owners Grant Cooper and chef Charles Clark are the team behind Clark Cooper Concepts, a boutique restaurant group whose portfolio includes Brasserie 19, Coppa Osteria, The Dunlavy and Punk's Simple Southern Food, plus the soon to open Satisfy.

For fans of its Paella Sundays, the last opportunity to enjoy the dish of saffron-infused arborio rice topped with Gulf shrimp, mussels, calamari, Spanish sausage and chicken will be this Sunday, February 9. You can bid a final farewell with a glass or two of the housemade sangria. 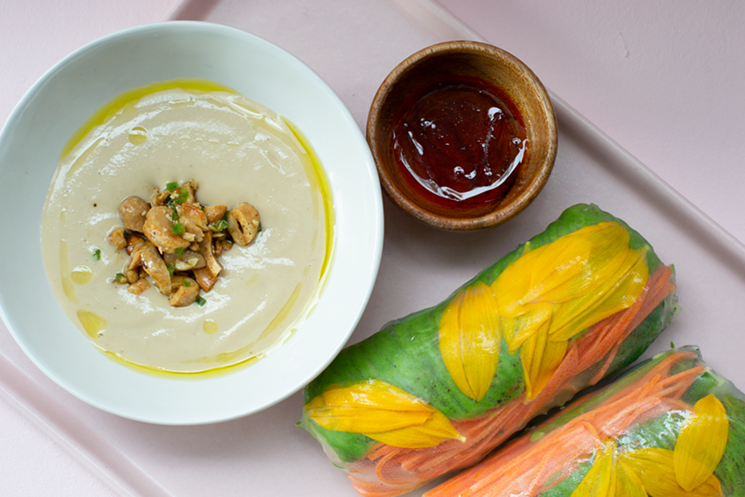 Healthy and colorful food will be the theme at Satisfy.
Photo by Shannon Smith

Satisfy, 2229 San Felipe, is slated for Spring 2020, but the restaurant is having its second sneak peek pop-up at The Dunlavy, 3422 Allen Parkway, February 26. The seven-course meal will showcase the healthy and balanced cuisine from chef Samuel Walter. Tickets are $115 per person and include juice and wine pairings.

The newest restaurant from Clark Cooper Concepts will be open for breakfast, lunch and dinner. 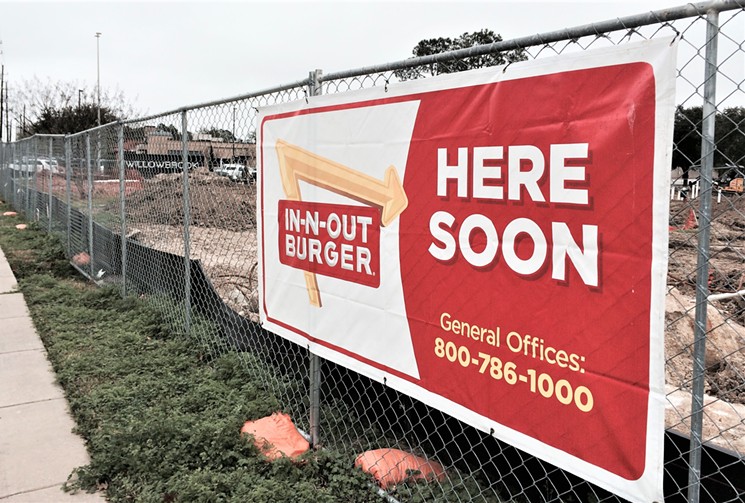 In-N-Out Burger, 7611 W. FM 1960, is now under construction. The California chain opened its first two Houston-area locations in Katy and Stafford November 22. Why does In-N-Out open in the suburbs of our sprawling city? Probably so that there is room for the mile-long lines. They make lunchtime at Chik-Fil-A look sparse.

We reached out to get a projected opening date, but were told that it could still be a few months. However, you can check out our first look at the Katy location, here in the Press. It's also fun to troll the comments people make about Whataburger versus In-N-Out. Grab a bag of popcorn and enjoy the show.

Cafe ZunZun, 12716 Telge, is planned for March, according to Community Impact. Owner Joel Castellanos has been selling his fair-trade and sustainably-grown coffees from local farmers markets in areas such as Jersey Village, Bridgeland and La Centerra while the eco-friendly structure for the business is being constructed. However, it can't really be called a brick and mortar. Instead, Cafe ZunZun will be located in a prefabricated building made by EcoSteel, a company in California. Its insulation values help to keep the interior cool while the coffee is roasting. According to its Facebook page, the Loring s7 Nighthawk coffee roaster will be going in soon. 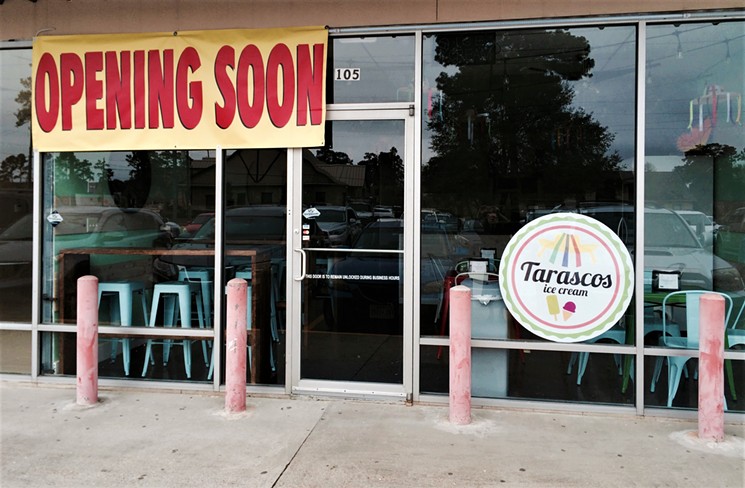 Tarascos brings its treats to Cypress.
Photo by Lorretta Ruggiero

Tarascos Ice Cream, 12779 Jones, is expected to open softly February 7. This will be the second location for the ice cream and paleta shop. The original is located at 13932 Westheimer. Besides the Mexican-style popsicles made with fresh fruits and ingredients, the store sells snacks like chicharrones and churros. Mangonadas are also a popular treat as well as the unicorn ice cream, which is more restrained than some places around town but still adorable. And the prices are a bit lower than some of the Instagram-favored places.

The owner told the Press that grand opening plans are still in the works. 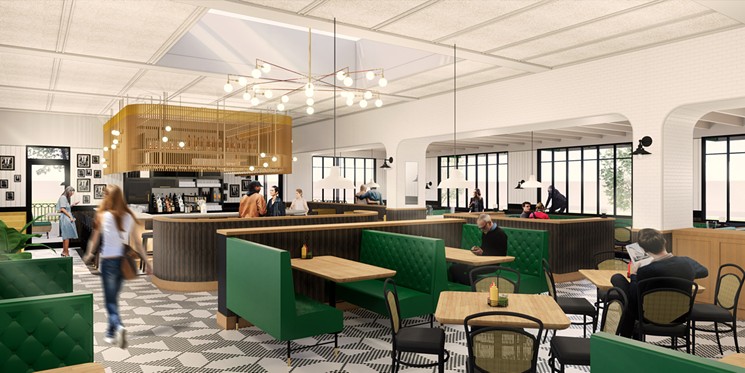 Katz's Deli & Bar is coming to The Heights.
Rendering by Michael Hsu Office of Architecture
Katz's Deli & Bar, 2200 N. Shepherd, is coming to The Heights next fall. This will be the third location for the "Katz's Never Kloses" concept. The new spot will be open twenty-four hours a day, seven days a week like the other two locations in Montrose and The Woodlands. Breakfast is available around the clock. 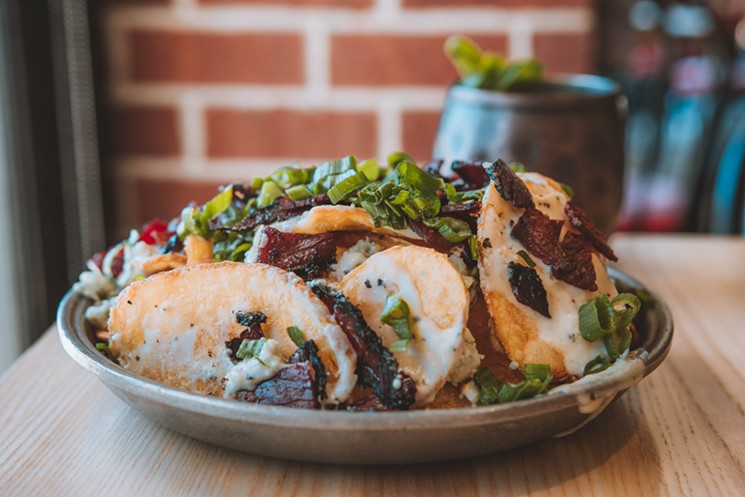 The house-made loaded chips at Katz's Deli.
Photo by Duc Hoang
The restaurant serves traditional deli sandwiches like corned beef, pastrami and Reubens, plus salads, burgers, matzo ball soup, kosher-style hot dogs and even its version of a monte cristo, the Monte Kristo on challah bread. If you save room for dessert, the Original Cheesecake Sandwich is a belly-busting creation made with a slice of New York cheesecake in a brioche roll topped with chocolate sauce, strawberry sauce, Oreo crumbles and powdered sugar. 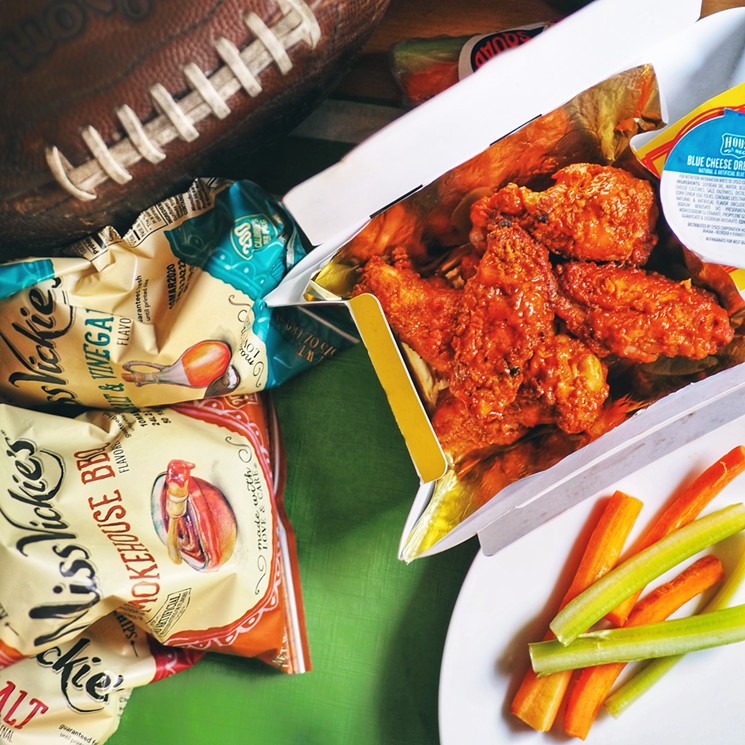 Football season is over, but wings season is forever.
Photo by Wing Squad

Wing Squad has debuted in Houston as a delivery-only concept. Founded by Robert Earl of Virtual Dining Concepts, the delivery only business is serving its wings, sides, salads and desserts from existing restaurants and delivered by services such as DoorDash, UberEats, GrubHub and Postmates. Besides Houston, the company is rolling out of cities such as Chicago, Boston, Dallas, Las Vegas and more. It website, Facebook and Twitter pages all say that it is serving from 130 spots as of now. In an email, we were told just Houston. We tried from this writer's address and it was not available in our area.

However, if you are lucky enough to be in the delivery zone, Wing Squad offers six flavors of wings, sides like mac and cheese, a couple of salads, chips, celery and carrots and desserts such as chocolate cake, chocolate chip cookies and brownies. Check out its website for delivery options.

Don Tomate Meat Market, 17835 Grant, is shooting for a February 22 opening. The market will serve fresh meats and produce plus Hispanic foods and goods. It will also have a taqueria open for breakfast and lunch, according to Community Impact.

Get a deal on fajitas at Picos.
Photo by Nick De La Torre
Arnaldo Richards' Picos, 3601 Kirby, has started a new fajita and happy hour special. On Monday and Tuesday, diners will receive 50 percent off Fajita Platters for Two. If the beginning of the work week is getting you down, you can make your way over to Picos for happy hour pricing all day Monday and Tuesday as well.
KEEP THE HOUSTON PRESS FREE... Since we started the Houston Press, it has been defined as the free, independent voice of Houston, and we'd like to keep it that way. With local media under siege, it's more important than ever for us to rally support behind funding our local journalism. You can help by participating in our "I Support" program, allowing us to keep offering readers access to our incisive coverage of local news, food and culture with no paywalls.
Make a one-time donation today for as little as $1.