The universe wanted me to find out about Nancy’s Hustle. A new neighborhood bistro and wine bar in EaDo, the eatery opened in early December and hadn’t been on my radar until I watched — interest piqued — an Instagram story in which my friend enticingly poured cream into perfectly formed chocolate souffle. “Where is that?” I asked her. “Nancy’s Hustle,” she replied.

A few minutes later, my private message box pinged from my other friend, Javier, whom I had planned to meet for dinner later in the week. “Can we go to Nancy’s Hustle?” he asked.

Like I said, the universe wanted me to discover Nancy’s Hustle.

Approaching the restaurant on a clear, crisp winter evening, the retro font of the neon yellow “Nancy’s Hustle” sign projected like a beacon in the night, quietly proclaiming the restaurant’s existence while drawing attention to the bustling scene inside.
click to enlarge

The main dining room at Nancy's Hustle has this retro-warehouse feel.
Photo by Mai Pham
Stepping inside, the place had this urban, industrial thing going for it that was part retro diner, part warehouse district. Behind the bar counter, in the open kitchen, the cooks and staff sporting bandanas moved about with ease. The music, played from an old reel-to-reel tape player positioned right near the entrance, was pitched just right as well — loud enough to create atmosphere without being overly cacophanous, allowing conversation without any strain to the vocal cords. The lighting was perhaps what I loved the best — soft and yellow and dimmed just so, casting an attractive glow on the entire scene.

The menu itself was pretty simple — just a handful of appetizers and mains, priced in that sweet spot between fast casual and fine dining ($6-$12 for medium plates; $15 to $28 for mains). We ordered a few items to share and a bottle of wine before deciding on entrees. 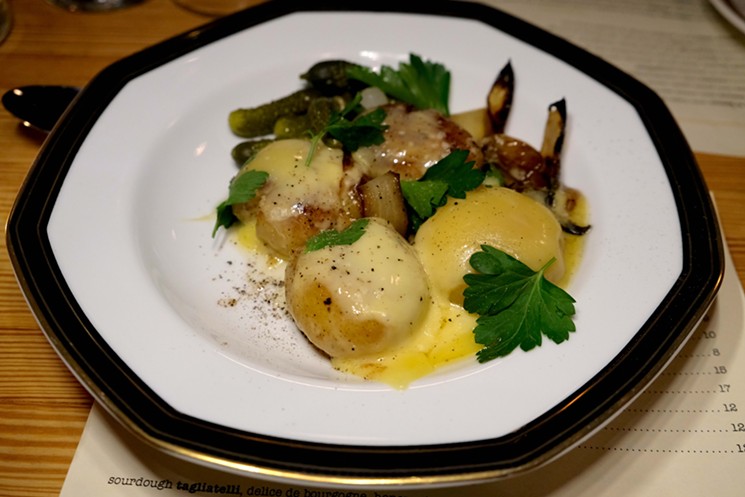 Raclette served over confited yukon gold potatoes.
Photo by Mai Pham
First up was the raclette, a melted cow's milk cheese served over confited Yukon gold potatoes, with cornichons. A dish that hails from the mountain regions of Switzerland, Germany and France, one of the things I always love about raclette is seeing it heated and then scraped from the cheese block directly onto your plate. The version here is a proper rendition of raclette, if somewhat anti-climactic. They don’t do the scraping of the cheese at the table, so you lose out on the presentation that makes the dish so special. Still, Nancy’s Hustle is the first place in Houston where I’ve seen raclette on the menu, and it’s hard not to like hot, melted cow’s milk Swiss cheese.
click to enlarge Chicken liver mousse.
Photo by Mai Pham
Chicken liver mousse served on crusty bread was good to share and paired well with our 2015 Jamsheed “Illaj” Syrah from Victoria, Australia, a bottle recommended by sommelier and co-owner Sean Jensen. Ham and cheese croquettes were perfectly crisp on the outside and on-point flavor-wise, but a bit too runny on the inside. Ham and cheese croquettes.
Photo by Mai Pham
Our mains were very good. My friend easily polished off her roasted snapper filet, served atop charcoaled beets and fennel aioli. My order of hangar steak, dressed with black truffle jus, came out a perfect medium rare (as requested) and came with one of the most divine preparations of potatoes I’ve had in a while, a square potato pave with a caramelized crust, and silken, creamy center.

We ended the night by sharing the chocolate souffle, served with orange creme anglaise, and cups of $1 coffee (where on earth can you get $1 coffee anymore?).
click to enlarge Chocolate soufflé.
Photo by Mai Pham
Too often, a restaurant opens too ambitiously, trying to do more than it is capable of before it is ready. Nancy’s Hustle isn’t one of those places. Though our dinner wasn’t perfect, it was clear that this was a place where the owners were focusing on doing things right. Service was excellent. Timing, for a two-week-old restaurant, was very good. The atmosphere was the kind that invited you linger.

Throughout the night, chef-owner Jason Vaughan, in between expediting orders, also made it a point to touch every table. It was during one of his table visits that I asked him: “Who is Nancy, and what is she hustling?”

His explanation: “Nancy comes from Nancy’s Diner in the original Mad Max film,” he said, adding “As for the hustle — that’s what we’re doing here every night.”

Nancy’s Hustle is located at 2704 Polk, Ste A, and is open Tuesday through Sunday from 5 p.m. to midnight, with Happy Hour from 5 to 6:30 p.m. and a late night menu every night at 10 p.m. For more info, visit nancyshustle.com.