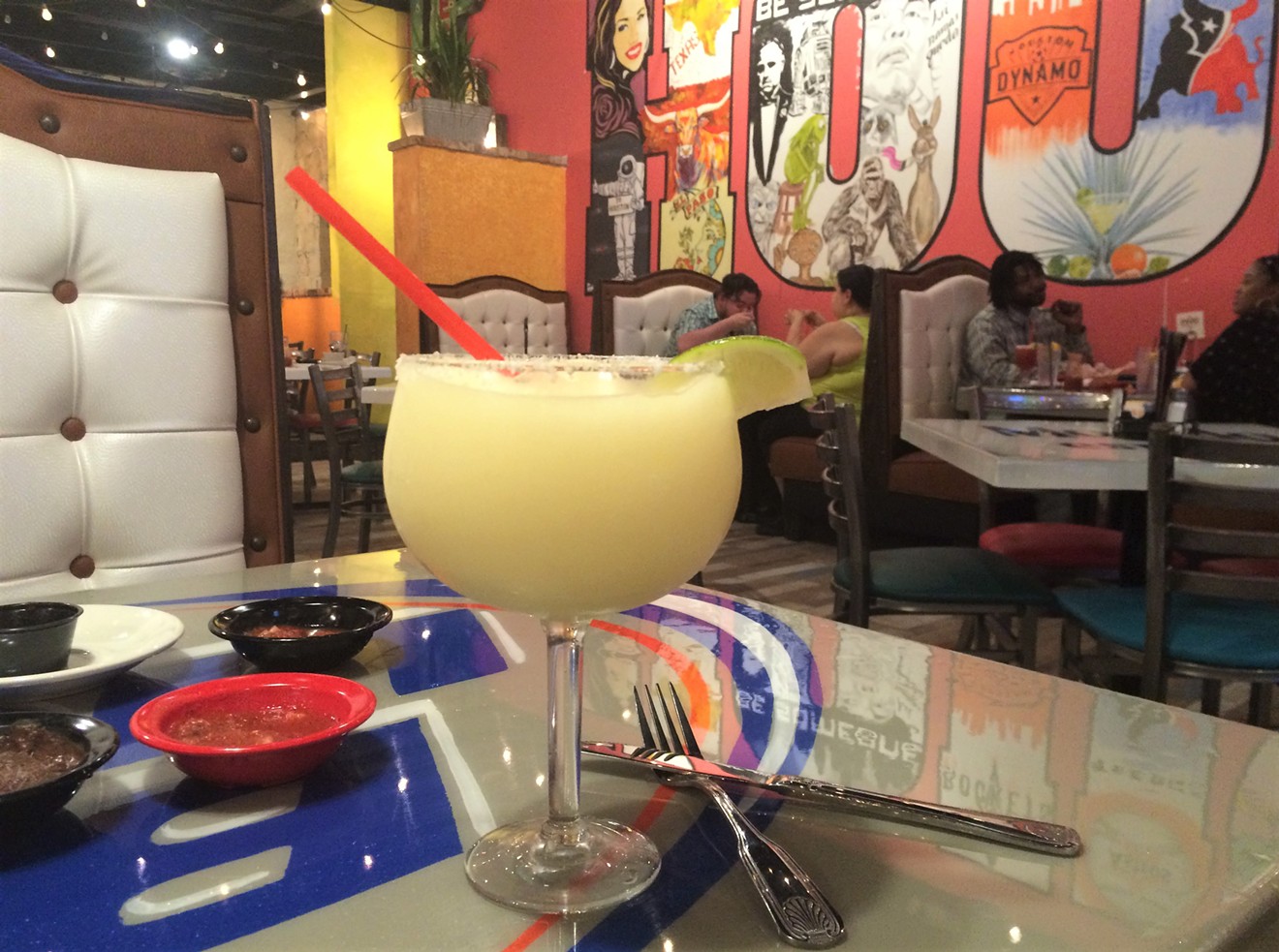 Have a margarita with Selena, Marlon Brando and Donkey from Shrek. Photo by Lorretta Ruggiero

I am always surprised at the amount of restaurants and businesses that continue to pop up along the Highway 249 area. When I was a kid, Willowbrook Mall was almost in the boonies, with FM 1960 still in its Farm to Market stage when the mall was built. With the booming economy and booming development comes a booming population and those folks have to eat. And one of the cuisines that Houstonians never seem to get enough of is Tex-Mex. At least, that's the case with my family, so when I saw a new Mexican joint opening less than ten minutes away, I had to check it out.

The restaurant options around most malls tend to be chains. The Olive Garden, TGIFridays and various Pappas-owned locations are all within striking distance of Willowbrook Mall. Romano's Macaroni Grill was one of those until it closed  last year.  Now El Paso Mexican Grill, a family-owned chain out of Louisiana, has opened in the same building with only the minutest traces of the Macaroni Grill left.

El Paso has an attractive exterior.
Photo by Lorretta Ruggiero

The company has put a lot in to making the exterior welcoming. It has lovely landscaping with colorful flowers, a fountain and an old donkey cart. The outdoor patio wraps around the corner of the building and looks like a great spot to enjoy a margarita. However, the stormy weather led my daughter and me to opt for an indoor booth instead. The male half of my family was weathering the storm with Bob Seger in The Woodlands.

The interior of El Paso is, dare I say, adorable. The eyes are drawn to the word Houston painted on the main wall with various Texas notables and other celebrities, human and otherwise, painted inside the bubble letters. It's fun and eclectic. Who knows how The Godfather and Kermit the Frog each wound up on the wall? But, they are there, along with Cheech and Chong and of course, Selena.

We were seated at a comfortable booth, perfect for checking out the murals that decorate the walls. Day of the Dead skeletons are a motif. The Tiffany-style lamp shades are an odd touch, but they fit in with the bright colors.

We were given a basket of chips, a small pitcher of red salsa and a little bowl of refried black bean dip. I have never, in my many years of eating at Mexican restaurants, been served bean dip. I have eaten plenty of it out of aluminum cans and I have eaten lots of refried beans at restaurants, but this was a first. And it was a good first. I normally prefer pintos over black beans, but this bean dip had a creamy texture and I really liked the flavor, which was a good thing, because the salsa did nothing for me. Not to sound like Gordon Ramsay, but it was bland. It tasted like the salsas I have experienced in other Mexican restaurants outside the state of Texas. We need heat here. And preferably some cilantro. All I got from this salsa was tomato and onion, not much else.

Bean dip is a bonus.
Photo by Lorretta Ruggiero

My daughter ordered an orange Fanta and I chose the medium frozen margarita. It says it's 27 ounces and comes in just under $10. There is a small option and a larger one, too. When it arrived, it looked the size of most jumbo margaritas at your typical Tex-Mex spot. It was rather lime-y, which I like.

The menu seems a bit on the pricier side for Tex-Mex and maybe that's because we Houstonians are spoiled by tamale and enchilada platters under $10 all across town. While we have some local restaurants charging fine dining prices for combo platters now, it still remains to be seen whether El Paso's tamale platter can command a $14.95 price tag. I didn't try it, because I have been burned a few times by restaurant tamales. Y'all know what I'm talking about. Sometimes you get a giant burrito of masa with very little filling or you get a cigar-sized cylinder, clearly out of a can. Maybe I will give El Paso's a chance by ordering one off the a la carte menu on a future visit.

How many margaritas did I have?
Photo by Lorretta Ruggiero

And the a la carte menu is where I went for a steak chimichanga  ($8.99). I wasn't in the mood to take home yet another side of rice and beans to sit in my fridge until I threw it and its styrofoam container away a few days later. That just leads to self-loathing for wasting food and killing the environment and I don't need more of that in my life.

Of course, restaurants would prefer that you order the meal, which in this case, would have been $15.95, so those rice and beans, with a side of guacamole would have cost $7 more. And there are some weird pricing differences at El Paso. For one thing, it's quite a bit more expensive at the Houston location than the Louisiana restaurant. Perhaps, it's the higher rent or the fact that much has been put into the Willowbrook location's decor. However, the wine and beer prices are actually on the lower side. For instance, a glass of Josh Chardonnay or Cabernet goes for $6.29. I might switch to drinking wine with my fajitas at those prices.

The horseshoe bar at El Paso.
Photo by Lorretta Ruggiero
My daughter ordered the sampler platter ($13.99), which I pointed out wasn't very helpful for a First Look at a  Mexican restaurant. However, it did have a flauta and a quesadilla, so I figured that was something. The platter also includes two fried cheese sticks, two stuffed jalapenos, two chicken tenders and two chicken wings.

Our food actually took quite a while. The restaurant was humming, but not overly busy. A tattooed Bettie Page-type was seated at the booth across the dividing wall from us which, due to its dip, left us making occasional eye contact. That could be great for flirting, but not so great if someone thinks you are ogling their ink. 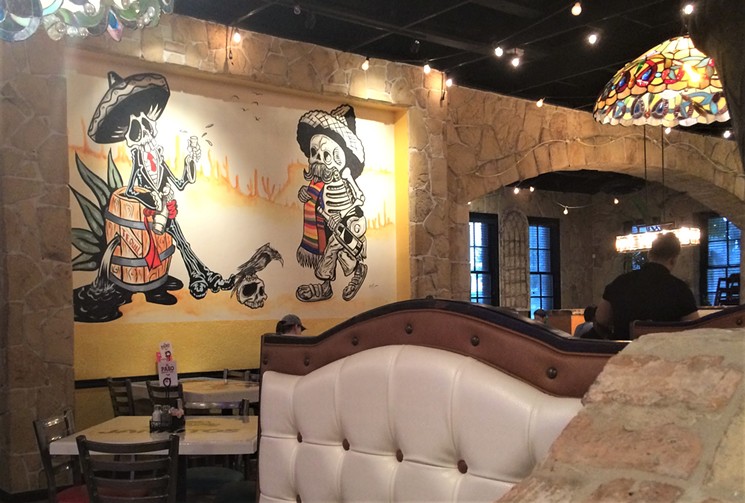 The booth opposite, pre-Bettie Page look-alike.
Photo by Lorretta Ruggiero
Our server was a newbie, but very attentive and friendly. I had to reassure him over and over that we were fine. As long as I have a margarita in hand and a pleasant companion, I am good. We were also checked on a couple of times by a manager, so the service is a plus.

Our food finally arrived and as my luck would have it, I was served the chimichanga meal rather than the a la carte version. The waiter checked his ticket and said that he had written it down as the a la carte chimichanga, but methinks he probably did not as I was charged for the meal. It was no big deal, he fixed it and I tipped him on the full meal and more. And, the rice and beans did not get thrown away later, but instead met up with a lonely tortilla hanging out in the pantry and became a late night snack for an exhausted Bob Seger fan.

The presentation wasn't super appealing as far as the chimi went. The advantage was the addition of white queso. Most of the time, chimichangas are served plain, with guacamole and sour cream on the side. I love queso (who doesn't?) and this one was pretty good. It was slightly thick, tasted cheesy, but didn't really have peppers in it. The chimi itself was well-fried, but the steak inside was different than what most Texans would expect. Instead of grilled fajita meat, it was more like tenderized round that you normally see in chicken fried steak. It was fine, but not what I expected. It was very tender and had a slightly sweet taste. I don't know what it was marinated in, but I used to work at a restaurant that marinated its meat in sherry and that's what it tasted of.

The sampler is for sampling.
Photo by Lorretta Ruggiero


My daughter's sampler was okay, too. The quesadilla was perfectly browned and made with a homemade tortilla. The chicken, both tenders and wings, were fried well, but again, rather under seasoned. I was born in Louisiana and I know that its various cuisines use a lot of peppers, which surprises me to not see spice in the food at El Paso. Granted, we only ordered a couple of items, so future visits could be different. That salsa, though, needs to be kicked up a notch.


El Paso Mexican Grill has a happy hour during the week from 2 p.m. to 6 p.m., with 2 for 1 margaritas, so I know I will be taking advantage of the comfortable patio in the near future and probably enjoying some of its yummy queso. And maybe, I will give the tamale platter a shot and see how it fares. Who knows? It might make me rethink restaurant tamales.

El Paso Mexican Grill
7607 Cypress Creek Parkway
Open Daily, 11 p.m. to 10 p.m.
KEEP THE HOUSTON PRESS FREE... Since we started the Houston Press, it has been defined as the free, independent voice of Houston, and we'd like to keep it that way. With local media under siege, it's more important than ever for us to rally support behind funding our local journalism. You can help by participating in our "I Support" program, allowing us to keep offering readers access to our incisive coverage of local news, food and culture with no paywalls.
Make a one-time donation today for as little as $1.