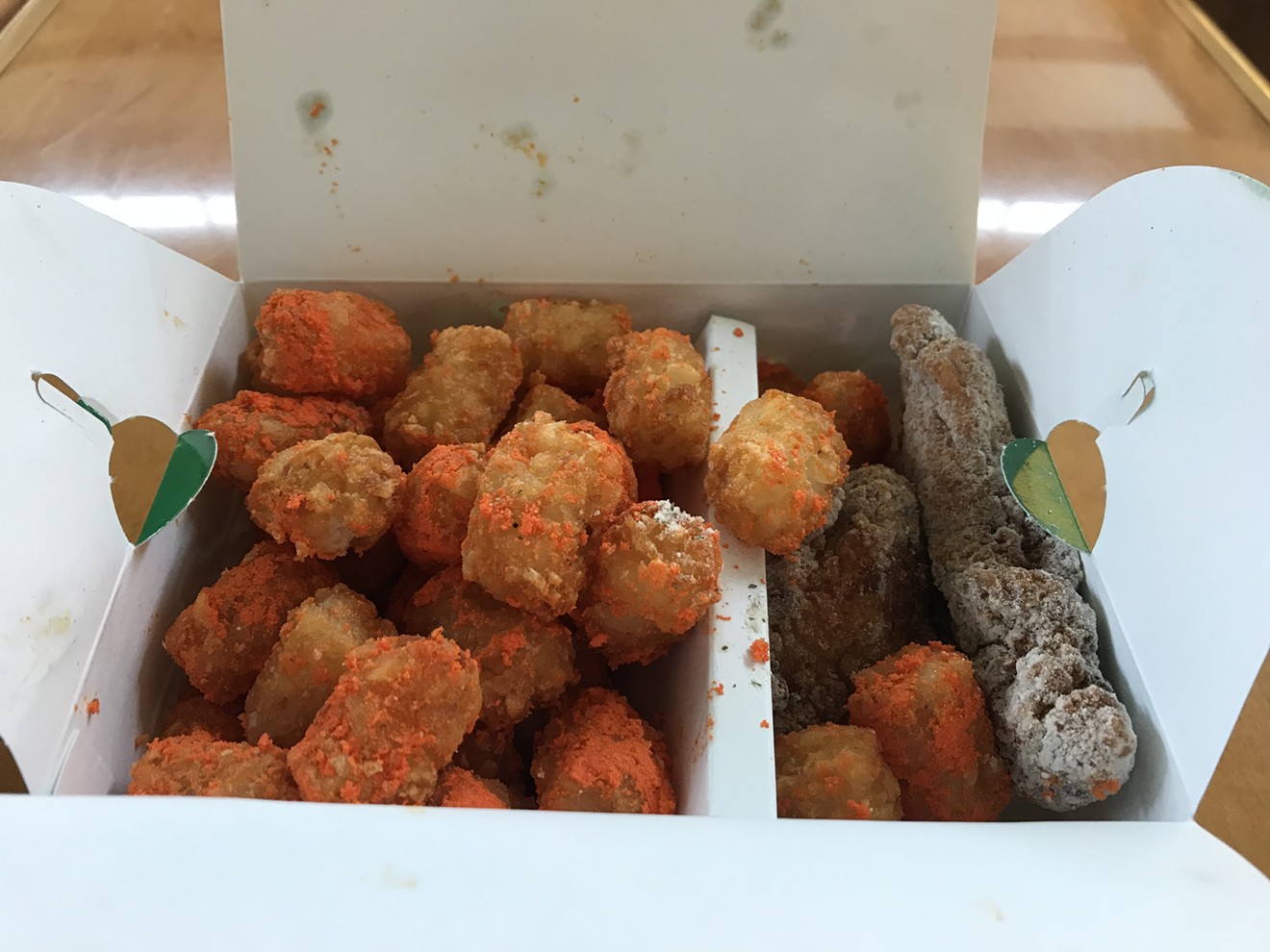 "Cheddar" tots to the left, chicken tenders to the right. Photo by Cory Garcia
Even in our nicest malls, eating at the food court feels like something of a gamble. That’s not to say that your average food court meal is awful, it’s just that it rarely ranks higher than OK. Food courts serve their purpose, and we know what we’re getting ourselves into when we step up to order, but we all know if Cheesecake Factory was just a little bit cheaper we’d probably be eating there instead.

But like you, I’m not afraid to try a new food court option in hopes that maybe this will be the place that makes me reevaluate my stance on food courts. So a few months ago when I saw the first signs that Potato Corner was coming to Memorial City Mall, I found myself tentatively excited. After all, what could be better for an energy boost that some fried fare covered in flavored powder? Now that it’s here and I’ve given it a few chances, I am sad to report this is not the fried haven you were hoping for.

I hate to lean on that old internet crutch of “you had one job!” but the truth is that Potato Corner really only has one job—serve up moderately tasty fried potato variants—and at they really miss the mark. On the taste front, things are fine I guess; their powdered flavor options, necessary as they are because the plain fries and tots themselves are nothing to write home about, are best viewed through the lens of snack chips. The cheddar tastes closer to Cheetos than cheese, the BBQ tastes like what you’d get in a bag of Lays, so on and so forth down the line. The only real winner in the bunch is their garlic & parmesan option, but in my visits, they’re usually out of that choice or they get it confused with the sour cream & onion powder, which is a (gross) bummer.

But the flavor issues would probably be more acceptable if the fries and tots had anything close to a good texture. It’s the danger of the food court—you’re not always going to get fresh food, and few foods are ruined by sitting out the way that fried potatoes end up. The fries are totally limp, like you bought them, rode around in the car for 45 minutes, then finally got a chance to sit down and eat them. The tots fare a little better, but not much; they have next to no crunch, but they’ve got a good body at least, and they’ll fill you up, albeit with a mix of potato and regret.

Weirdly, their chicken tenders are pretty good. They’re nothing fancy and aren’t the best chicken option in the food court, but at least they’re cooked up when you order them, and when you get the combo with fries and a drink you end up with a ton of food for a fair price. In terms of value, it’s not the worst option.

While Houston waits to see if Get Fried is serious about expanding into Houston—most people don’t want to travel to Humble just to eat at a food court—Potato Corner could have served as an interesting spoiler in the French fry wars. Alas, it was not to be. It’s just the latest in a long line of chains that have had a good gimmick but poor follow through. In that regard, maybe it’s the perfect food court spot after all.
KEEP THE HOUSTON PRESS FREE... Since we started the Houston Press, it has been defined as the free, independent voice of Houston, and we'd like to keep it that way. With local media under siege, it's more important than ever for us to rally support behind funding our local journalism. You can help by participating in our "I Support" program, allowing us to keep offering readers access to our incisive coverage of local news, food and culture with no paywalls.
Make a one-time donation today for as little as $1.