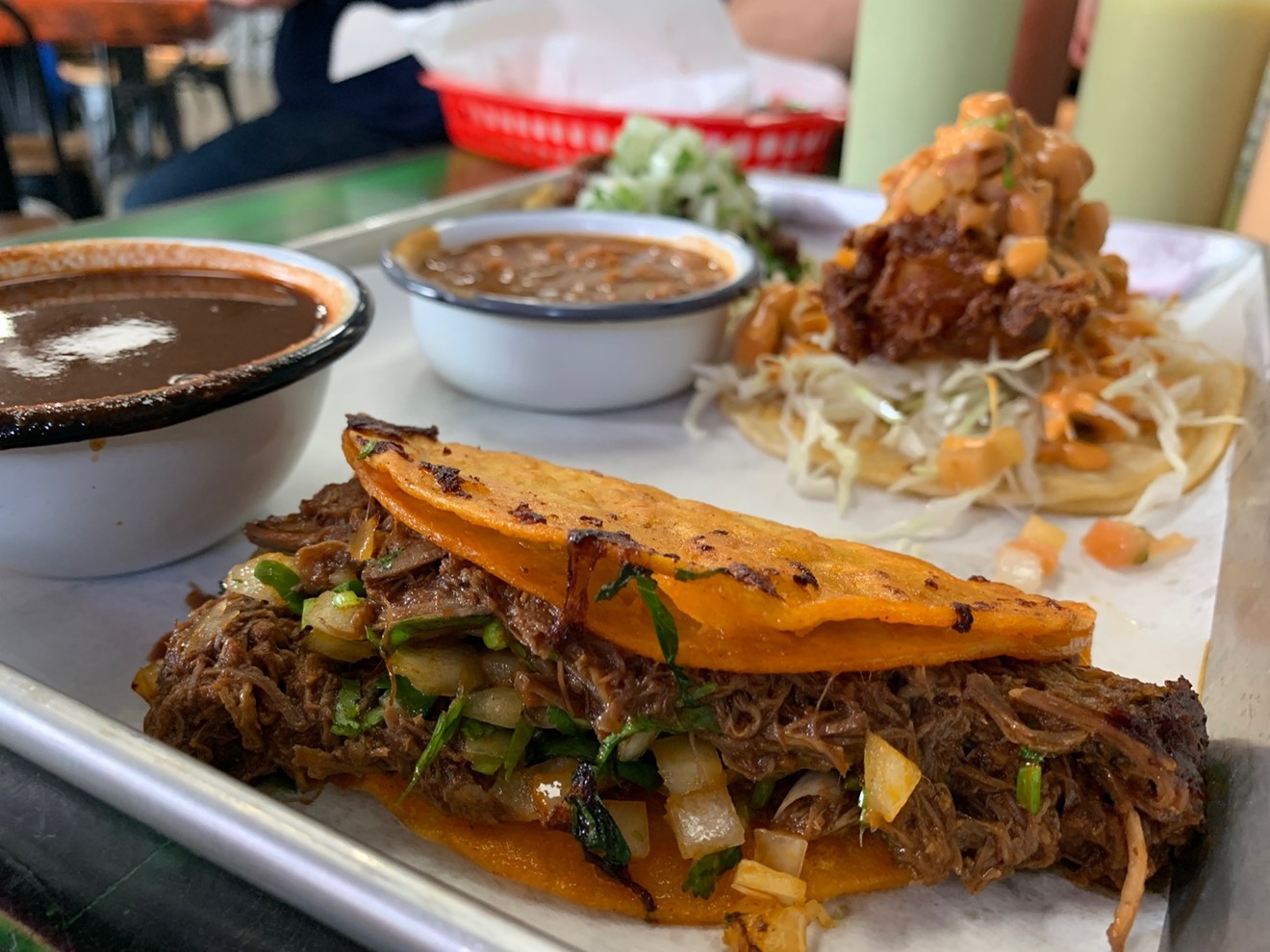 Tacos birria are messy and delicious. Photo by Lorretta Ruggiero
While some Houstonians began their January dry or by joining a gym, my household was still in vacation mode. With kids on college break and post-holiday funk, my husband Classic Rock Bob and I weren't quite ready to start our New Year's resolutions.

Recent outings that included errand-running and concert-going took us by a couple of restaurants that debuted this past December. We dropped in for some quick nosh and found two new restaurants that we can add to our list of reliable eateries.

One of these places was a new taco spot on our side of town in Cypress. Tacos El Patron opened in early December 2022. It's the third location for the brand which first opened in Pleasant Hill, California in 2019. It also has a location in San Francisco. Its new Cypress eatery opened in the space which housed a longtime Italian neighborhood spot, Cafe Bella.

We walked in on a Saturday afternoon to a brightly lit space with a handful of customers. There was a mix of tables and wooden log-style booths. As we were perusing the chalkboard menu, an employee said that we could sit anywhere. She brought the menu and handed it to me with a "Here you go, Mama." The chips and salsas took us to a happy place.
Photo by Lorretta Ruggiero
A young man soon arrived with chips, a small bowl of fresh salsa and four squeeze containers of different sauces. He described each one to us and we tried to contain our glee with some sort of dignity. I thought the restaurant was counter service so I didn't expect to receive chips and salsa. This was an unexpected bonus and an excellent one at that.

The little bowl of salsa was sort of a mix between salsa crudo and cooked salsa. The tomato base seemed to have been cooked, if briefly, but it was loaded with minced red onion, green onions and a bit of cilantro. It was vibrant and fresh. I loved it. Classic Rock Bob, on the other hand, was going down the line of squeeze bottles, trying each sauce on a chip. Unwisely, he began with the habanero sauce despite the warning from our server. Since we hadn't received our margaritas yet, he was in a bit of a spicy crisis. That didn't stop him from progressing to the tomatillo-based verde, the creamy aguacate (avocado) and the Valentina-like red sauce. Not strong, but refreshing nonetheless.
Photo by Lorretta Ruggiero
We ordered the house margaritas which are served on the rocks. It took a while but we could see them being made in a cocktail shaker by the employee who had first greeted us. They arrived in Ball canning jars with rims half-salted and half-seasoned with chile-lime spice which I assumed to be Tajin. They were made with fresh lime but they weren't particularly strong.

We ordered three tacos between us since we were just stopping in for a mid-day snack. However, once they arrived, we realized we might not be eating for the rest of the day. The prices may seem a tad high for a single taco but these were hefty single tacos. We could have ordered some extra tortillas and easily have turned our three items into five or six. This Pescado taco might require a knife and fork.
Photo by Lorretta Ruggiero
My husband had ordered the Pescado ($4.75)which is one of the Taco Especiales. It was a large, crispy battered piece of fish on a couple of corn tortillas, generously drizzled with chipotle crema. When he offered me a bite, a good portion of my face was colored orange by chipotle. It was garnished with thinly sliced cabbage and was one of the better fish tacos I have had at a restaurant.

Because I had ordered two tacos, I was given a choice of one free side. I opted for the frijoles. They were somewhere between charro beans and cowboy beans. I would have liked a little more heat but they were a nice extra and would please folks who don't care for the chunkier version of charro beans. The Pastor Taco could use a tortilla buddy to help with all that meat.
Photo by Lorretta Ruggiero
My Taco Pastor ($3.25) was a handmade corn tortilla loaded with marinated pork. Unlike traditional pastor meat which is bright orange and sliced off a vertical spit, this had more of a chili and cumin base and the meat was meltingly tender. Because it was so loaded, it wasn't easy to eat, so I ate some of the meat on its own before biting into the onion and cilantro loaded tortilla. I shared a few bites with Classic Rock Bob in between his sauce sampling spree.

The Taco birria was generous as well with stewed, sweet beef spilling out of two crispy tortillas. Everyone knows you need a lot of napkins for birria and fortunately, the table was equipped with a small bucket full of them. I happily dipped my taco in the salty, flavorful consomme only stopping briefly to offer my companion a taste. He declined, not being a big fan of beef or wearing darkly colored broth for the rest of the day. A tray loaded with deliciousness.
Photo by Lorretta Ruggiero
Our servers checked on us repeatedly and seemed pleased with our affirmations that the food was really good. I asked for a tiny to-go container to take home the consomme and boy, was I happy the next day to dip a turkey pinwheel sandwich into the flavorful broth. Birria consomme makes everything better. Look out bacon ice cream, there could be a birria gelato taking your place someday.

The only slight disappointment was the margaritas. You could taste the fresh lime juice, with a tiny bit of pulp, and they were handmade. They needed some oomph though, especially for $10.95 apiece. The two margaritas cost more than our food which fed us very well for less than $15.

The restaurant does have a happy hour Monday through Thursday from 2 p.m. to 6 p.m. with $5.99 selected food items and $5.99 house margaritas, sangria and wine. There are also beer specials. We plan to give that a try, breaking our New Year's resolutions in the very near future. I will also bring my adult daughter to try the tripe or lengua tacos since she has a fondness for offal.

While Houston has a multitude of Mexican restaurants from taquerias to fine dining, we have to admit: This California import does it right when it comes to tacos. Now, we'll have to check out the rest of its menu. The outdoor patio is semi-enclosed and cozy.
Photo by Lorretta Ruggiero

Another new hotspot that we hit in late December was the recently opened Austin import, Home Slice. While late nights at downtown clubs happen rarely for us as an older couple, we made the trek in late December to the Continental Club, 3700 Main, for a live music show from the local Irish rock band, Blaggards.  After a few raucous hours watching some seriously large and burly guys in kilts dancing and a rather obsessive, slightly inebriated, superfan attempting to high five lead singer Patrick Devlin while he was performing, we Irish-jigged ourselves next door to the new Home Slice to grab a quick piece of pizza before heading home to the 'burbs. The intimate interior has a New York City vibe.
Photo by Lorretta Ruggiero
There was a side window for walk-ups so we each ordered a slice. We were told that they would bring it to us, so we headed to its outdoor patio. It was a balmy Houston winter's evening and we admired the white wrought iron encasing the patio and the festive glow of Christmas lights overhead. Tables of young people were enjoying their pies and I got that sense of longing a middle-aged person feels remembering youth and marathon Saturday nights out on the town.

I love this part of Main street in Houston. It's funky, slightly subversive, with a vibe that is distinctly retro cool. And there are enough older folks sporting Havanera shirts or rockabilly gear to make the atmosphere inclusive regardless of age.

New York-style pizza hits Houston by way of Austin.
Photo by Lorretta Ruggiero
As I mentally waded into nostalgia, our pizza appeared. Classic Rock Bob had ordered a simple cheese slice and I got one of my favorites, eggplant pizza. The first time I had eggplant pizza was in New Haven, Connecticut with my husband's Italian American relatives. Being a huge fan of eggplant Parmigiana, I was delighted to find a pizza that combined fried slices of eggplant with cheese and sauce on a thin crust.

One would think I would never find a facsimile eggplant pizza in Houston, but I did when we moved to Cypress and it was right at the front of our subdivision at a place called Napoli's. It was owned by a guy from New Jersey and his eggplant pizza was heavenly. Unfortunately, it closed a few years ago.

At Home Slice, the eggplant squares are scattered atop and it was delicious. The crust was thin with just the right char. For $4.75, though, the slice was not very big. Maybe I am spoiled by the grande slices at places like Brother's Pizza, a longtime Houston pizza favorite. Though I may sound greedy, I needed more eggplant like Walken needed more cowbell.

A whole pie is a better deal.
Photo by Lorretta Ruggiero
Still, the pizza was some of the best I have had in a while. A table next to us ordered a large pizza and it looked amazing. The large cheese pizza at Home Slice is 18 inches which is a couple more than most around town. When CRB and I have more time for a sit down meal, we'll go back and enjoy a full-sized pizza with a cold beer or one of its reasonably-priced wines. And I am eager to see if its White Clam Pizza really has the street cred of Naples and New Haven.

Why yes, it is.
Photo by Lorretta Ruggiero
The ambiance of the restaurant was charming, with exposed brick and celebrity "autographed" photos lining the interior walls like a New York pizza joint. The interior is dim and intimate while the patio offers a cool place to hangout under the watchful gaze of Lionel Richie.

Home Slice
3701 Travis
832-810-7437
KEEP THE HOUSTON PRESS FREE... Since we started the Houston Press, it has been defined as the free, independent voice of Houston, and we'd like to keep it that way. With local media under siege, it's more important than ever for us to rally support behind funding our local journalism. You can help by participating in our "I Support" program, allowing us to keep offering readers access to our incisive coverage of local news, food and culture with no paywalls.
Make a one-time donation today for as little as $1.