Sweet dreams are made of cookies from Fluff Bake Bar. Photo by Julie Soefer
Fluff Bake Bar, 314 Gray, is celebrating its reopening January 20 with a bake sale starting at 10 a.m. In conjunction with 44 Farms, there will be dishes like Prime Rib Benedict Sammy and brisket with pimento cheese on a pretzel roll. The bakeshop closed temporarily on October 22 after a water pipe burst in the overhead apartment building and flooded Fluff Bake Bar's dining room. The kitchen was still intact and it is from that kitchen that owner Rebecca Masson continued filling wholesale orders and coordinating pop-ups and pie sales.

The renovations include an expanded kitchen and a counter bar with sixteen barstools. Local Houston artist, Donkeeboy ( Alex Roman Jr.), is painting a new " Skyline of Cakes" mural on the wall.

Starting this Saturday, the restaurant will be open six days a week. Masson plans to bring back her " Dinner With My Friends" chef series eventually.

Louie Comella and some happy shoppers from Italy.
Photo by Gracie H., Ivox Media
Chicago and New York both have their versions of Little Italy and if Louie Comella gets his way, so will Houston.
The co-owner of the popular gelato and pizza spot, Gelazzi, is now bringing the Italian corner store to the Houston Heights. Italian American Grocery Co., 3605 White Oak, opened January 16, despite the atypical winter storm that left many Houstonians homebound. With the melting snow (we cannot believe we are actually using those words in the Bayou City), comes the opportunity to get back out and fill up with foodstuffs. The new grocery will offer Italian cheeses, meats, pasta, and a variety of olive oils and . For those who are missing the pastries and Italian cookies of their childhoods, there are plenty of tempting choices including cannoli and biscotti. And of course, Italian Cream Cake.

Comella, who is also involved in the film industry, says that he wanted the Italian foods that reminded him of his hometown of Chicago. Customers who loved the gelato and pizzas at suggested that he offer even more Italian products. With the new store, there will also be a number of Italian wines and a selection of beers, curated by Tanya Kostetsky, as reported by CultureMap Houston.

Comella also plans to have a delivery system in the Heights area which would allow customers to order prepared foods, frozen pizza, sandwiches, plus beer and wine. Comella says he wants to continue the tradition of his grandfather, who owned a pizza restaurant in and bring Italian-American culture to Houston.

Los Mexican Restaurant,4840 Beechnut, has reopened after damage and three and a half feet of water from Hurricane Harvey shut it down. Now, newly remodeled, the restaurant celebrated its return with a grand opening January 17. All proceeds from sales will go to who suffered damage from Hurricane Harvey. The Adair Family Restaurants Group owns nine restaurants in Texas, including three other Los  locations in Houston.

Weights and Measures, 2808 Caroline, had a small kitchen fire, which disrupted part of the MLK parade on Monday, January 15 reported by KHOU.com. The damage is being assessed and a reopening date is expected to be as soon as January 19, according to its Facebook page.

Big City Wings, 7620 Katy Freeway, opened December 13 near the Marq'e movie theatre. Established in 2015, this location is the fifth in the Houston area. There are $8 lunch specials, $15 steak nights on Saturday, and online ordering is available for sports fans getting ready for the big game. The crawfish season is also underway at Big City Wings for lovers of the mudbug.

Mardi Gras Chill Spot, 17817 FM 529, opened in December. Not only do they offer Cajun and Creole favorites like gumbo and poboys, but they also have frozen daiquiri machines to add a little  temps to your dining experience.

Aria Suya Kitchen, 6357 Westheimer, opened December 15. The restaurant serves African cuisine with dishes like goat pepper soup and suya- a Nigerian spicy, skewered meat. There are also cocktails made with palm wine, an alcoholic beverage made from the sap of palm trees.

Warm up with coffee and pastries at Cafe Cosmopolita.
Photo by Leticia Mariscal

Meatballs are perfect comfort food in January.
Photo courtesy of Empire Pizza
Empire Pizza, 11805 Westheimer, opened January 1. The counter-service restaurant offers pizzas with a wild variety of toppings, stromboli, New England clam chowder, and a variety of salads.  For people have given up early on their New Year's resolutions, there is the belt-busting Fat Bastard- a pizza loaded with cheesesteak, french fries, onion rings, fried cheese sticks, chicken fingers, mozzarella and American cheese. We suggest you order it in your best Mike Meyer's Scottish accent.

The Fat Bastard will blow your diet out of the water.
Photo courtesy of Empire Pizza
Pangea, 6009 Beverly Hill, opened October 15. The restaurant and bar hookah, but it is also kid-friendly, with an indoor playground. The global cuisine ranges from Middle Eastern to Spanish, Arabic Greek. There is live music on the weekends. 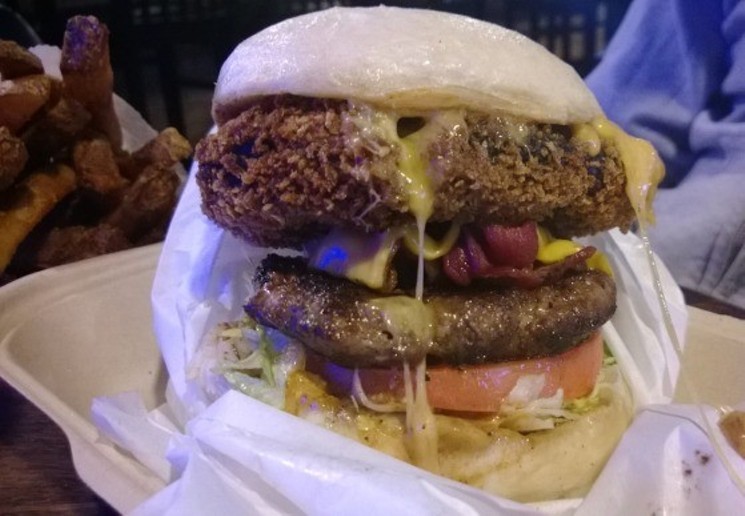 The Flip n' Patties burger.
Photo by Joanna O' Leary
Flip n' Patties, 1809 Eldridge, started its soft opening on December 26. The popular Filipino food truck has set down roots in its first brick and mortar, but the food truck is still cruising around town, with its schedule listed on the website and social media. The burgers are served on steamed bao buns with eclectic ingredients. The Jeepney is certified Angus beef, (house-made Filipino sausage), fried egg, and tomato with banana ketchup aioli. There is also a vegetarian burger option with a , cheese-stuffed portobello mushroom.The chicken pupu is another popular item, praised for the sweet sauce that comes with the fried chicken thighs. The hip, youthful vibe is further increased with murals from a local artist decorating the walls and Maine Root sodas. The fries are hand-cut and double-cooked, but you can also choose the chicharron to accompany your Filipino burger, for a delicious pork rind experience. Or both, if you want to share with a friend. Moderation in all things, especially fries and cracklings.

Now, that's alotta bagels!
Photo by Gregg Goldstein
Golden Bagels and Coffee, 3119 White Oak, opened January 10. The new bagel cafe is starting with a limited menu for the first week, but bagels with a variety of spreads are on offer and the Katz coffee is keeping the clientele happy. A joint venture from Katz Coffee owner Avi Katz and Houston attorney Gregg Goldstein, the new coffee and bagel shop will eventually have a larger menu and expanded hours. For the meantime, the store is open from 6 a.m. to noon Monday through Friday and 7 a.m. to 1 p.m. on Saturday and Sunday.

The Turkey Leg Hut began its soft opening for its new location at 4830 Almeda. It originally was located Washington. Yes, giant turkey legs are on the menu if you want to feel like King Henry VIII. If you prefer to feel like a Mardi Gras king instead, try the turkey leg stuffed with dirty rice. It comes at the princely price of $20, but you're the king(or queen). Check its Facebook page for DJs and music.