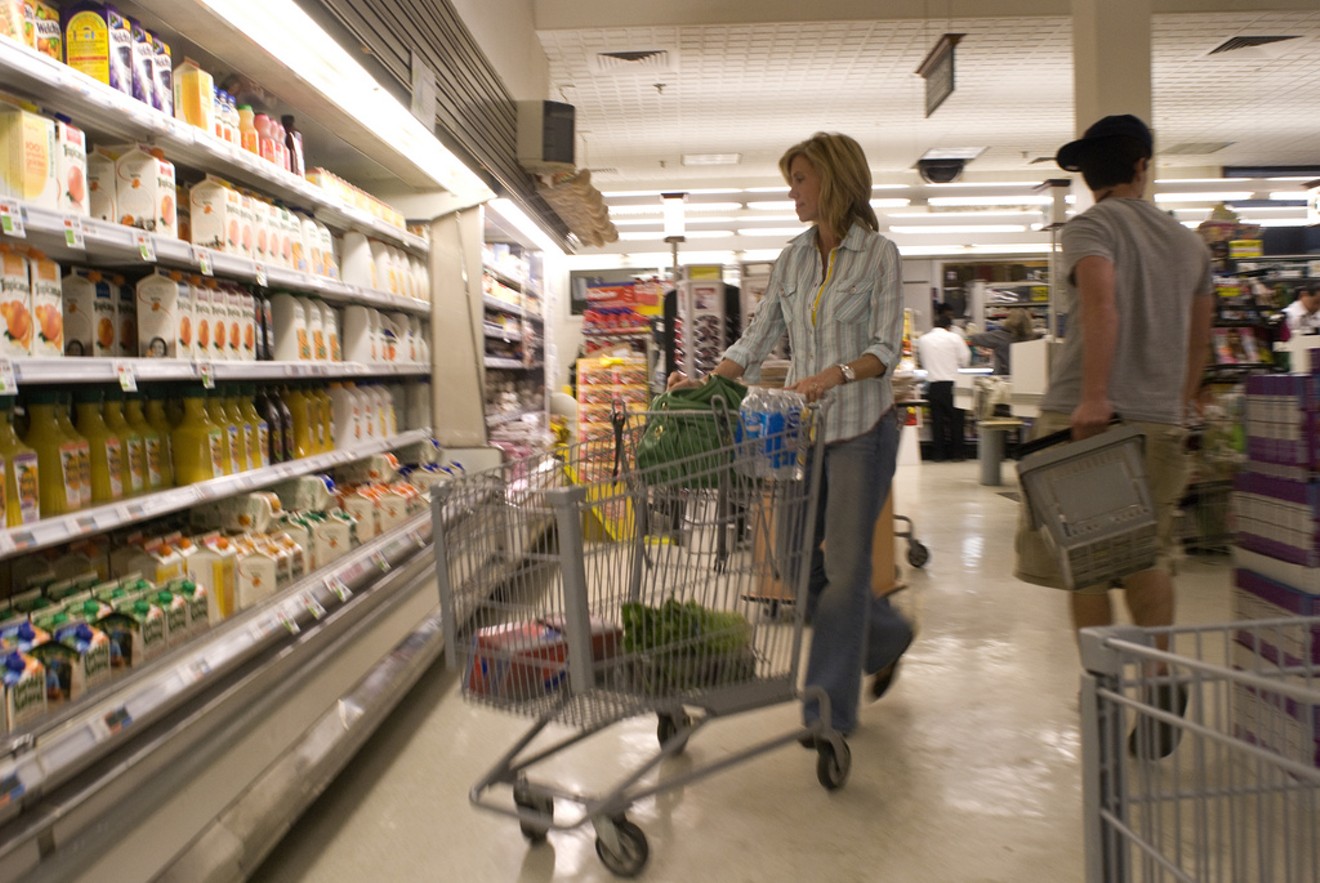 It can get pretty crazy in the grocery store. As a shopper you have some responsibilities...and some rules. Photo by Amy Jeffries via Flickr
On Wednesday, I took aim at sackers because, quite frankly, they've been messing up my groceries lately. But to be fair, they do have a pretty tough job. And when you need to deal with the general public all day, anyone might slack off a little. Still, it was worth the refresher course on what is OK and what isn't.

But, I realized in writing it that I was leaving shoppers off the hook. Let's be honest. Some of us are awful in the grocery store. And this is our wake up call. Note that there are more rules for us than for the sackers. They get training. We don't. Here's your training lesson.

This isn't some lefty, hippie thing. It's just smart. First, it's easier than having to deal with tons of stupid plastic bags. Yes, I use one per week to clean my cat's litter box (she's a real a-hole otherwise), but that's not enough reason to take home 500 bags every week — and you know that is how many they give you (refer to previous post for more info). Second, it is better for everyone. Those plastic bags live for like a trillion years and that's nasty, dude.

This should go without saying, but I've seen some pretty rude people complaining and making scenes for no reason. Recently, I saw a woman complain because she was convinced something she was getting was 10 cents cheaper. She yelled at the checker and demanded to see the manager. The manager literally took a dime out of his pocket and gave it to her. A few seconds later, a sacker, who ran all the way to the back to check the price, confirmed the store was right and the woman was wrong. She kept the dime. Don't be that dime-keeping weirdo.

Rule 10: Be nice to other shoppers.

I'm just going to say it: If you cut me off, we will have a problem. I've watched seemingly sweet little old ladies shove people out of the way at the holidays to grab some canned pumpkin. We are all here doing the same thing: finding food to feed the pie holes of our families. So, give everyone a break and be civil or maybe, if you are feeling magnanimous, nice even.

Rule 9: Pay attention in the aisle.

Scenario: Two people have parked their carts next to one another one either side of a narrow aisle. Scenario Two: While searching for fat free sausage or something, a woman leaves her cart in the middle of a busy section of the store. Scenario Three: In an attempt to turn quickly, a man slams into the back of my foot. What do all of these things have in common? No one is paying attention. Put the phone down. Stop rushing. Move your cart over to the side and away from others. Isn't that just better for everyone?

Rule 8: Don't use your phone in line.

It's bad enough when someone wanders aimlessly around the store while yammering at 100 decibels and not paying an ounce of attention. But, when that happens in line, the whole system breaks down. I'm sure that whoever you are talking to (or texting with) will be happy to wait until you finish paying. I know we'll all be thrilled for both of you if you do.

If you decide you are going to brave the self checkout stand, either do it during a slow time of the day or know what the hell you are doing. If you bring 30 things up there (yes, you can do that) and every one is a vegetable you have to look up, you maybe should pick a checkout with a human. If you don't know how to use a credit card reader without assistance, again, maybe go through a line with a nice, helpful person. You're killing us all slowly otherwise.

Do I really even need to say this? Listen, the year 2000 called and it wants to introduce you to the debit card. Perhaps you've heard of it? I guess if you absolutely have to write a check, at the bare minimum, be ready. Have it mostly written before you're done. You're still going to get a bunch of eye rolls from customers and checkers, but at least you'll be done fast enough that you can get back home to your four-channel TV and new fangled fax machine.

Rule 5: Be organized at checkout.

Making sure your reusable bags (see Rule 12) are out and your food is semi-organized on the conveyor belt is a good start. Have your method of payment ready. Keep an eye on the checker and the sacker for any problems. And if you are going to use coupons, have them already out. Nobody wants to watch you dig through your
Fileofax looking for that five-cents-off coupon for frozen orange juice.

Rule 4: Put your cart back.

Remember those sackers? Well, they have to toil in the heat of summer in a brutal parking lot collecting your shopping carts. The least you can do for them is either take them back to the front door of the store or put them in one of those handy dandy shopping cart corrals. Make it a game and push it from a few feet away to see if you can get it in there perfectly (just don't blame me when you dent that BMW next to it). You'll get a little extra workout in the process and you won't look like a lazy jackass for leaving your cart next to your car when the corral is 10 feet away.

Sackers who do a good job should be tipped. Period. That includes at the checkout stand. Even if they don't carry your groceries out, if they sack them well, hand them something. I know there are a lot of very stingy tippers out there, but this is not the time. These folks work hard and get paid very little. We complain when they screw up, so we should be equally thankful for when they do well.

Rule 2: Don't eat food unless you are paying for it.

Hey, dude snacking on the nuts in the bulk aisle, what the hell are you doing, bro. This isn't your kitchen. And, you, lady chomping on a few blueberries. Yeah, we noticed. What you are both doing right now is something we in the normal world like to call stealing. It may only be a few cashews, but they don't belong to you, not yet anyway. If you want to drink a bottle of water while shopping and then pay for it later, cool. But, anything you can't scan later is off limits. I mean, really?

You can count, right?
KEEP THE HOUSTON PRESS FREE... Since we started the Houston Press, it has been defined as the free, independent voice of Houston, and we'd like to keep it that way. With local media under siege, it's more important than ever for us to rally support behind funding our local journalism. You can help by participating in our "I Support" program, allowing us to keep offering readers access to our incisive coverage of local news, food and culture with no paywalls.
Make a one-time donation today for as little as $1.