Good food begets good memories. Photo by Lorretta Ruggiero
I don't often find myself on the south side of our city so many of its dining establishments are unknown to me. With my daughter attending the University of Houston, I have begun to explore the restaurants within a 15-minute drive from the campus. One of those restaurants was Maria Rita's Cantina off the Gulf Freeway, which we reviewed recently here in the Houston Press. Following that review, a reader suggested we try another hidden gem in the Hobby Airport area: Hangar Kitchen.

Growing up on the northside of Houston, my family and I have always encouraged visitors to fly into Bush Intercontinental to avoid the hour long drive to Hobby. Inevitably, there was always someone who got a great deal on a redeye to Hobby which meant we had to brave the morning rush hour traffic on Interstate 45 to retrieve them. I myself have only flown out of Hobby once so it's not an airport with which I have much experience. 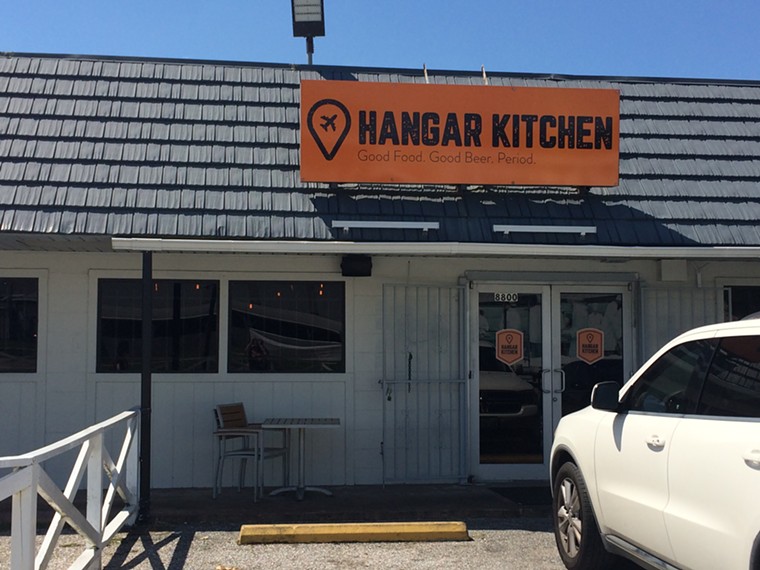 It's not easy to spot but it's worth the drive.
Photo by Lorretta Ruggiero
This week, after taking my daughter back to her dorm apartment with a load of provisions, she and I were famished and in need of a quick, late lunch. I decided we should heed the recommendation of the reader who suggested Hangar Kitchen. Google Maps said it was a 16-minute drive. That didn't give much time to make her 2:30 class but we headed out anyway.

While the address for the restaurant is Telephone Road, Google Maps had us pass up the Telephone exit and take the ramp toward Alvin instead, winding up on Reveille. I assume that was a route to avoid the numerous stoplights on Telephone. As we neared the restaurant, a Southwest plane was coming in so low it looked as if it might land on us. Control towers on one side and numerous strip centers on the other completed our scenery. The interior is cute and comfortable.
Photo by Lorretta Ruggiero
Hangar Kitchen is located in a non-descript business area which is why we passed it up and had to make a U-turn. Once inside, however, we found the business to be clean and welcoming with a much-appreciated blast of excellent air-conditioning. We were greeted  by an employee who was busy stocking items. There is a refrigerator with beer and soft drinks (including Topo Chico for those who have had trouble finding that  precious beverage). My daughter grabbed a Calypso lemonade and I was happy to see the amber version of Dos Equis, which I took for myself. There is also a handful of draft beers at very good prices for a pint.

We had a look at the menu on the wall. My daughter loves all things elote, so she definitely wanted the Elote Fries. She chose the Adult Chicken Tender meal ($10) and I opted for the Straight Up Burger. Online, I had seen the South of the Border burger and had originally planned that for my burger choice but it wasn't listed on the wall menu. I could have probably asked about it but I wimped out.

We ordered our food and paid at the counter, where the restaurant's name is spelled out in oversized Scrabble tiles. Our masked man at the counter looked to be the owner Dimitri Papadopoulas. We chose a two-person booth by the wall in the small dining room which has a few airport-themed posters and memorabilia on the wall. The back bar area has an actual door from a plane (Spirit Airlines-maybe it fell off) and the shiplap woodwork in the dining area would fit perfectly in a nautical-themed restaurant. My daughter deemed it "cozy". Hopefully, this was not a "found" object.
Photo by Lorretta Ruggiero
Other guests in the restaurant included two young women in Texas Southern University shirts, a larger family group and a single man enjoying a burger and an Abita, maybe after a night shift at the airport. Papadopoulos came out and talked to the family and they seem to be regulars. We didn't notice many restaurants on our drive so a good burger joint is probably a much-welcome business in the community.

Our food arrived in good time. The Elote Fries ($5) made my daughter's eyes light up. Lurid orange-red sauce covered the fries and corn. It wasn't spicy at all, which was good for my daughter but I could have used some heat.  It was topped with finely grated cheese. The menu lists cilantro cotija and parmesan but it was difficult to distinguish any subtle differences. It's like trying to explain the nuances of chili cheese fries. It's not fine dining, it's just tasty grub. You can't go wrong with a Straight Up Burger.
Photo by Lorretta Ruggiero
My burger was a brioche dome topping a hand-formed beef patty. I know it was hand-formed because it had a tenacious way of not staying together. Bits of beef would fall out of the bun, only to be put in place again by me. I eventually gave up and just picked up the pieces of beef and popped them in my mouth. It had the satisfying taste of a homemade burger with a little red onion, spring mix lettuce and thinly-shaved house-made pickles. The Bulldog sauce didn't seem to be quite what others have described. For me, it was more of a sweet mayo flavor. Fittingly named The Straight Up Burger, it was straight up delicious. No egg, bacon, cheese needed. For $6, it runs laps around fast food burgers for only a couple dollars more and it also beats out plenty of the more expensive burgers within the 610 Loop. You know what I am talking about; $18 burgers that don't even include fries. Come on.

Speaking of fries, I didn't order any with my burger because my daughter's chicken tenders came with fries so I had those while she enjoyed the elote version. They are hand-cut and crispy. The menu mentions a little seasoning but I didn't detect anything other than salt. The fries here stand up to the various toppings on offer, so guests can be assured that the loaded versions don't get overly soggy. I noticed a special on the restaurant's Facebook page called Chicken Drip Fries, made with buttermilk biscuit-breaded chicken and gravy. That's on my bucket list. It's all good. All of it.
Photo by Lorretta Ruggiero
The chicken tenders were hand-battered, fried well and crispy. I tried to talk my daughter into ordering the Cardi B sando instead but she didn't go for it. It's a sandwich made with Nashville hot chicken tenders, topped with slaw and homemade pickles. For $8, it looks like a messy, yummy party in a bun. Speaking of buns, it would probably go straight to my gut, not my butt. More's the pity. Still, I am ordering it next time.

My daughter's dish also came with coleslaw. I am a coleslaw fiend, a trait I share with my six-year old niece. Too often, coleslaw at restaurants is too sweet or has too much mayo. And if it is good slaw, they serve it in a tiny-ass ramekin meant for tartar or cocktail sauce. At Hangar, it's served in a soup cup because it is a legit side. And boy, it's good. The mayo had a slight pink tinge from the bleed-out of the purple cabbage and it didn't have a cloying taste of sugar. Thank you Hangar Kitchen for doing coleslaw right. Beer is cold and reasonably priced at Hangar Kitchen.
Photo by Lorretta Ruggiero
And it's that commitment to quality at a great value that will tempt us to return. Most of the burgers on the menu run $6 to $9, except for the Snake River Farms Wagyu, which gets very good reviews and merits the $12 price tag for its half-pound Wagyu patty, Cabernet caramelized onions and blue cheese. Though the restaurant serves casual eats, the ingredients are of a high quality and are put together thoughtfully. And there's no skimping. The fries here cost no more than at a fast food joint and you get plenty. And did I mention the serving of coleslaw?

My daughter and I played it safe this time with our orders. Maybe next time, I will go for a more elaborate burger like the Williams Tower with pulled pork or the Notorious P.I.G. that includes a patty made of bacon to top the beef patty. Or maybe I will have the guts to ask about the South of the Border burger because I love pico de gallo on a burger. The restaurant also has a couple of nods to Papadopoulos' Greek heritage with items like the Chicken Sticks Pita and Greek Salad, which I would also like to try. And there are always new specials along with a Friday Steak Night.

We had enough leftovers for my daughter to take back to her dorm for a snack. As we were leaving, I asked Papadopoulos about the pickles that were on the hamburger. They had a sweetness to them that I couldn't place. He said they were made in-house and that they used thyme and rosemary. I thought I tasted more of the sweetness of a pickling spice. Whatever is in them, I would definitely buy a jar to keep in my fridge. Hint, hint. Elote fries so good, you'll dream about them.
Photo by Lorretta Ruggiero
It is the little details that make a meal enjoyable. And we will definitely return to try more items, though they are closed on Sundays which is when our family is usually all together. We will just have to make plans ahead for another trip.

As we made the drive back to UH my daughter said, "I can't stop thinking of those elote fries." And that's what makes a good restaurant.

Hangar Kitchen
8800 Telephone
346-204-5651
hangarkitchen.com
KEEP THE HOUSTON PRESS FREE... Since we started the Houston Press, it has been defined as the free, independent voice of Houston, and we'd like to keep it that way. With local media under siege, it's more important than ever for us to rally support behind funding our local journalism. You can help by participating in our "I Support" program, allowing us to keep offering readers access to our incisive coverage of local news, food and culture with no paywalls.
Make a one-time donation today for as little as $1.