The Buffalo Bill burger with a glass of whiskey delivers a Wild West flavor. Photo courtesy of Hopdoddy

Hopdoddy, 820 Bay Area Boulevard, will open December 17. This will be the fifth Houston area location for the burger chain, which began in 2010 and made its first Houston appearance in 2016. Its physical address is Webster, but is also considered the Baybrook and Clear Lake areas. Beats me.

The fast casual burger restaurant offers counter service followed by table service, so it can be a bit confusing for the easily confused, of which I am one. There are a variety of burgers to choose from including the Brew Series Burger which incorporates a local draft beer into its burger and  The Impossible Burger, which is made from wheat and potato proteins and something called heme, which I still can't figure out. Anyway, it's making vegetarians thrilled to be able to enjoy a beefy -tasting burger.

It's not impossible to eat a vegetarian burger.
Photo courtesy of Hopdoddy
In December, the restaurant will be offering the " Big Parma", a sandwich made with a chicken parmesan (or Parmigiana) patty, IPA pomodoro, mozzarella and basil mayo. For a sweet ending, there is the very popular Nutella chocolate pretzel. Besides local brew offerings from Saint Arnold's, Spindletap and No Label, there is a full bar, plus margaritas.

For each Goodnight Burger sold, Hopdoddy gives $1 to local non-profits. Since its 2016 arrival, the company has donated $120,000 combined to The Periwinkle Foundation, the Hurricane Harvey Relief Fund and the Texas Chapter of the Multiple Sclerosis Society. 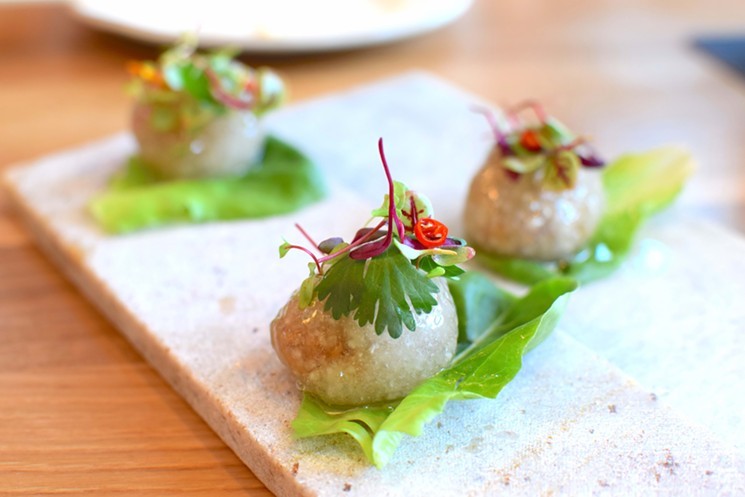 The tapioca dumplings at Aqui.
Photo by Mai Pham

Aqui, 520 Westheimer, will have its last service December 23. The team of chef Paul Qui, Jillian Bartolome,and Adam Mathews will open a new concept in the spring of 2019 which will feature Filipino bites and shareables in an intimate setting. Qui and his posse will begin pop-up dinners this January.

The Filipino-born, Austin-based chef has been a rising star since winning Top Chef in 2011 and also the James Beard award for Best Chef Southwest in 2012. However, his month-long stint in rehab and misdemeanor assault charges, stemming from a March 2016 arrest in Austin, surrounded the celebrity chef with bad press and questions about supporting his restaurants.  The assault charges against him were dropped in April, because his ex-girlfriend chose not to cooperate, according to the Austin-American Statesman.

The brilliant bad boy chef trope is nothing new, with Anthony Bourdain's ground-breaking memoir, Kitchen Confidential, highlighting the rampant substance abuse, womanizing and other vices in the fine-dining world. Gordon Ramsay's and Marco Pierre White's memoirs are full of tales about physical and verbal abuse within restaurant kitchens. And the sexual harassment that is finely woven into the fabric of the hospitality industry is no longer a loosely kept secret. It remains to be seen whether or not Qui emerges from the scandal humbly seeking redemption or if being labeled a woman beater follows the rest of his career.

Ayie's is a Filipino, family-owned business.
Photo courtesy of Ayie's
Ayie's, 11702 Grant, reopened October 1 after relocating from its original location in a strip center on the same street. The family- owned Filipino restaurant offers traditional dishes that certainly differ from the haute cuisine of Paul Qui, but will make folks seeking home-cooked Filipino food happy. Mom Ayie is in the kitchen with daughter Shana, while daughter Sheila, son Sean and partner Dan manage the front of house.

Get authentic Flipino desserts at Ayie's.
Photo courtesy of Ayie's
There are noodle soups like beef mami and chicken arrozcaldo and seafood specialties like spicy buttered shrimp and daing na bangus, a dish of fried milk fish belly. Typical Filipino appetizers such as fish balls and fried lumpiang start off the menu with traditional Filipino desserts like ginataang totong made from roasted mung beans, sweetened rice and coconut cream and mais con yelo, a shaved ice milk with sweetened corn, ending the menu on a sweet note.

The restaurant serves Maine Root Sodas and calamansi (or kalamansi) juice with lychee gels. If you're really in the mood for traditional Filipino food, try the crispy pata (deep-fried pig trotters) and the spaghetti and chicken.

Fitzgerald's, 2706 White Oak, is closing permanently January 1, 2019. The bar and music venue has hosted numerous local and national acts since 1977 and you'd be hard-pressed to find a Houstonian under 60 who hasn't seen a band or artist perform at the 41-year old nightclub.

Owner Sara Fitzgerald is ready to retire from the world of band bookings and booze selling, according to CultureMap Houston. She sold the property in July and has been renting it ever since. There will be a New Year's bash on December 31 along with " A Heights Jerry Xmas" featuring Heights Funk Collective and Upon a Quasar, a Grateful Dead tribute band December 8, starting at 6:30 p.m. So, when you are finished at Lights in the Heights, you can go say a fond farewell to your old stomping grounds.

A new rooftop bar in EaDo is coming.
Photo by Next Seed/Sunset
Sunset, 2119 Dallas, is currently under construction and the owner is seeking capital investments through the crowd-funding site NextSeed. Dominique Moreau plans to open the EaDo space as a third story rooftop lounge, with a 1,600 square foot patio separated from the bar by a floor to ceiling glass wall, allowing for unobstructed views of the city's skyline.

Moreau, who is a level 2 sommelier, will put a focus on the most Mad Men of drinks, the martini, while also serving craft beers and cocktails. The decor will be inspired by 1950s design and the patio will feature lit up globes. Moreau plans on bringing in dee-jays and lounge acts. The proximity of the club to Houston's sports stadiums make it an easy spot to access for a drink  before or after the game. Though not a sports bar, there will be several televisions for game viewing.

A new dining and shopping development is coming to Richmond.
Rendering courtesy of District West
Bosscat Kitchen and Libations, 21711 FM 1093, is slated to open the fall of 2020 in District West, a multi-use development from Ferguson Family Partners. This is the first cooperative business endeavor for the family. The  land on which the new development will stand once served as the Ferguson family homestead.

This will be the second Bosscat Kitchen and third concept in Houston from the team, which began with the first Bosscat in Newport Beach, California in 2014. Co- owners John Reed, Leslie Nguyen and Vinnie Capizzi  brought the restaurant to Houston in 2017 and its sister concept BCK Kitchen and Cocktails to the Heights in 2018.

Indulge your inner Fred Flintstone with Fruity Pebbles French toast.
Photo by Kirsten Gilliam
Known for its Whiskey Room and creative comfort food, Bosscat relies on seasonal flavors and a collaborative effort from the staff and Executive Chef Peter Petro for its menu. We are pretty sure the Fruity Pebbles for the French toast are always in season.

Construction has begun on the complex and Star Cinema Grill is expected to open in March 2019.

Smiling faces and ribbon cutting at the new Twin Liquors in Spring.
Photo courtesy of Twin Liquors
Twin Liquors, 5231 FM 2920, celebrated its grand opening in the H-E-B Market shopping center with a ribbon cutting. Community members from the Spring-Klein Chamber of Commerce were in attendance as well as professionals from the industry and co-owners David Jabour and Margaret Jabour.

The Austin-based purveyor of beer, wine and spirits began in 1937. When the first generation left the business in 1981, another generation of the Jabour family took over in 1982 and there are now 90 locations in Central Texas. The Spring store makes the sixth in the Greater Houston area.

Bring your mates for a Sunday Roast at Poitin's.
Photo courtesy of Poitin

Poitin Bar & Kitchen, 2313 Edwards, launched its Sunday Roast December 2. The new launch will be held every Sunday in conjunction with Poitin's  Social Sundays, an all day program of food and live entertainment from 12 p.m. to 9 p.m.

The Sunday Roast was a popular event at owner Ian Tucker's gastropub, The Exchequer in Ireland. " I am thrilled to be able to bring a communal, delicious and unique food event to Houston with the new Sunday Roast program at Poitin, " Tucker said in a press release.

The Sunday Roast must be pre-ordered by the Friday before, no later than 5 p.m. There are carve-it yourself options like smoked and roasted whole chicken. Berkshire pork rib roast or standing prime rib roast, with sides. Each roast is $100 and will feed a group of four. The price also includes a bottle of house wine.

Sunday suppers at FM Kitchen are serious.
Photo courtesy of FM Kitchen and Bar
FM Kitchen and Bar, 1112 Shepherd, is launching its Sunday Supper at 2 p.m. December 9. Chef and owner Ryan Hildebrand will offer a menu which changes weekly. This week's supper is garlic and herb prime rib, glazed onions and carrots, served with thyme-scented popovers for $32.
KEEP THE HOUSTON PRESS FREE... Since we started the Houston Press, it has been defined as the free, independent voice of Houston, and we'd like to keep it that way. With local media under siege, it's more important than ever for us to rally support behind funding our local journalism. You can help by participating in our "I Support" program, allowing us to keep offering readers access to our incisive coverage of local news, food and culture with no paywalls.
Make a one-time donation today for as little as $1.