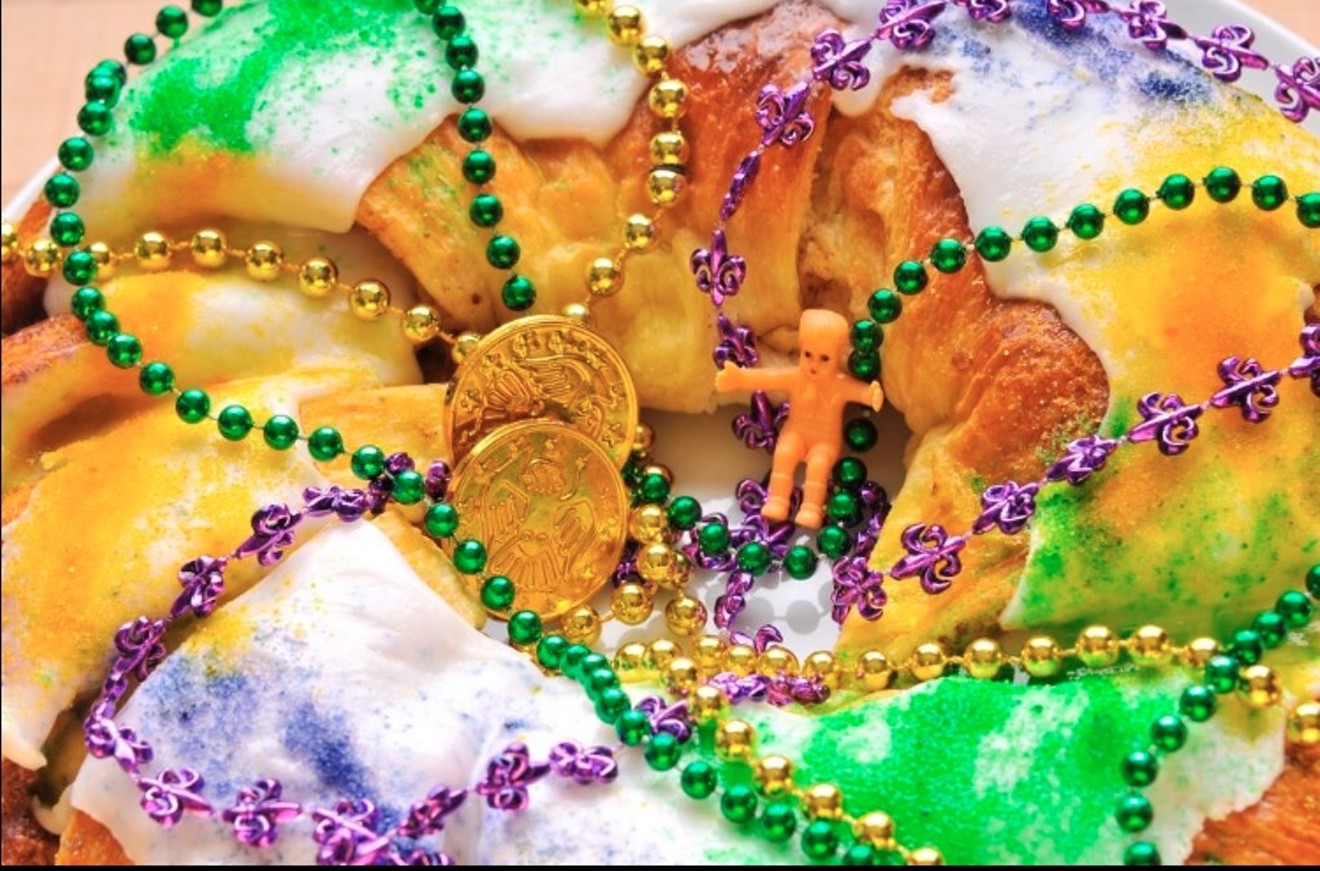 Ooh, baby, baby. That's some King Cake. Photo by Alan Montgomery
It's February and it's time to go down to the Mardi Gras. For some, that means beads and boobs. For others, it's a license to get loaded on Hurricanes and daiquiris. And for the devout, it's time to prepare for the Lenten period and load up on all the sweets, meats and treats that they will deny themselves for 40 days. Mardi Gras comes late this year, March 5, so there's plenty of time for hedonism.

The King Cake itself is not really what most people enjoy about Mardi Gras. It's more of a tradition. A plastic baby representing the Christ Child is hidden in the cake and whoever finds it in their slice, without choking on it first, is the King or Queen of Mardi Gras (or at least for that evening). That privilege entitles you to hold next year's party and supply the cake. If you are the host this year, you might want to try slipping the bebe into the slice of the best party giver, if it's not you. Try to skip cousin Boudreaux, unless you want to spend next Mardi Gras at his house on wheels, drinking Busch beer out of the chipped coffee mugs he stole from the Waffle House.

Not Jus' Donuts' traditional King Cake.
Photo by Andrea Spears
Some people will pick up an obligatory grocery store cake, others will plan far ahead and order one from Ambrosia or Gambino's in New Orleans. However, a number of Houston bakeries make their own delectable versions, while some of the Cajun restaurants around town order cakes from New Orleans and sell them for a premium. The cost can range from six bucks at the local store to $40 for an "imported " or freshly made cake.

I was not a huge fan myself, but after trying a couple from Rao's and Drew's Pastry Place, I realized that what was missing from my previous experiences was filling. Bakeries have learned that the typical yeast dough can be a little dry. Add some cream cheese or fruit preserves, and King Cake becomes a tasty dessert rather than a tired tradition.

Unfortunately, Drew's Pastry Place has closed, but Rao's is still one of the top places to get a delicious King Cake. Last year, we compiled a list of some popular options around town and you can check them out here in the Houston Press. This year, we are including a couple of regular favorites and some new ones to try, for every budget. You can even bake your own, if you're up to making a risen dough. It's a fairly complicated, or at least time consuming process, but some people love a challenge. Maybe if you succeed, we might feature your King Cake next year. Bonne chance! 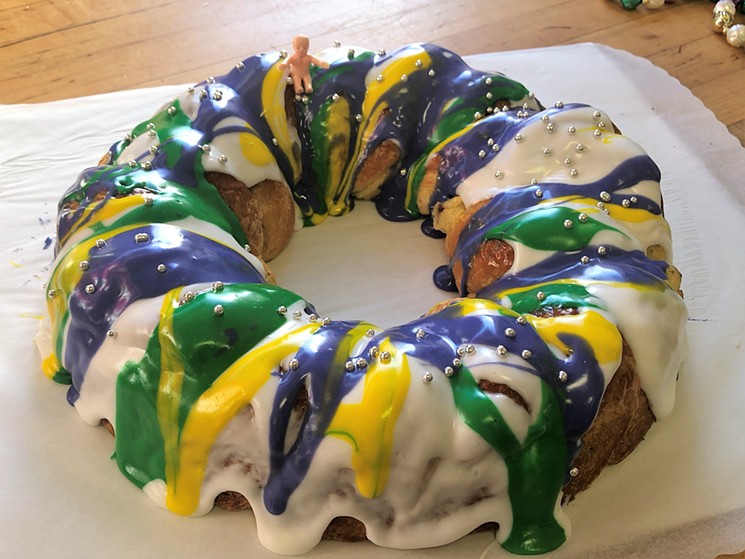 This 40-year-old Montrose bakery repeatedly tops the list of best King Cakes in Houston across the board.Sandra Bubbert has baked for presidents, prime ministers and a host of entertainment superstars visiting H-Town over the decades.

What will it cost you to Mardi Gras like a VIP? Well, the traditional King Cake of cinnamon and pecans will start at $35.95 for a three-pound beauty. Add a filling like raspberry, cream cheese, pralines and cream or chocolate mousse for an extra two dollars. Take it to the next level with double filling and you're looking at a nickel under 40 bucks.

Call ahead, because the bakery needs a 24-hour lead time and is closed on Sundays. If you want to really enjoy your Mardi Gras party without cooking (more time for drinking),  Acadian Bakery offers party trays as well. And if you're just going in to pick up a cake, you might want to sit down and enjoy one of its famous burgers before heading home with the goods.

This family-owned bakery makes both the French style and the New Orleans style King Cake. In many Catholic cultures, from Europe to Mexico, the King Cake is served on Twelfth Night or the Epiphany, January 6, to celebrate the Three Kings, or Wise Men, arriving to see the Baby Jesus. In French speaking nations, the Galette des Rois is more of a puff pastry confection with almond cream. At French Gourmet, the cake includes beads, coins, a baby, and a paper crown. The time consuming creation of this pastry means it is a little more expensive at $44.99, but it's a show stopper and Aunt Bertha might even shut her trap when she sees this cake. It's also a special order, so put down the Hurricane and go order it now.

The New Orleans-style is 20 bucks cheaper and includes the beads, coin and baby. Patrons can choose almond, cream cheese or cinnamon. The cakes are baked on Friday and Saturday, so call ahead for orders. It says it in its name; this family-owned bakery is not just donuts and they have been making not just donuts since December 2000. It offers the traditional NOLA King Cake with cinnamon, brown sugar and pecan streusel starting at $20. You can add strawberry, pineapple (that's the first we've seen) and cream cheese for an additional cost. The party version starts at $40, if you have a bigger crowd.


If you want to buck tradition (you rebel, you), you can try the Texas-style Sock It To Me King Cake. It's a pound cake with cinnamon, brown sugar, pecan streusel and it's glazed and sugared like a traditional King Cake, complete with baby, coins and beads. With the recent passing of the Queen of Soul, this cake would be a fitting tribute to her this year. Call it the Queen Cake.

These cakes are made to order, so if you want them for your fais do-do, get on it chere.

Verna Mae's serves up Cajun specialties like po-boys and gumbo, but owners Don and Susan Ballard leave the King Cake baking to the professionals at Gambino's. Many Louisiana transplants will tell you that Gambino's makes the best traditional New Orleans King Cakes and they are willing to pay for delivery, or even, make the drive to see family in NOLA and pick up a few cakes on the way home.

Well, if you can't make the drive to New Orleans, you can make the drive to Verna Mae's and pick up a Gambino's  King Cake for $39.99. They have traditional, cream cheese and praline in stock usually, but you might want to order ahead for Bavarian cream or fruit fillings.  Undecorated cakes can be ordered with the ingredients for customizing them yourself.

Verna Mae's also offers Gambino's by the slice for $4.99, so it's a good ending to a Cajun meal. Verna Mae's is also having its first annual Fat Tuesday party on March 5 from 11 a.m. to 10 p.m., if you don't already have some bon amies to celebrate with. Check out its Facebook page for more info. 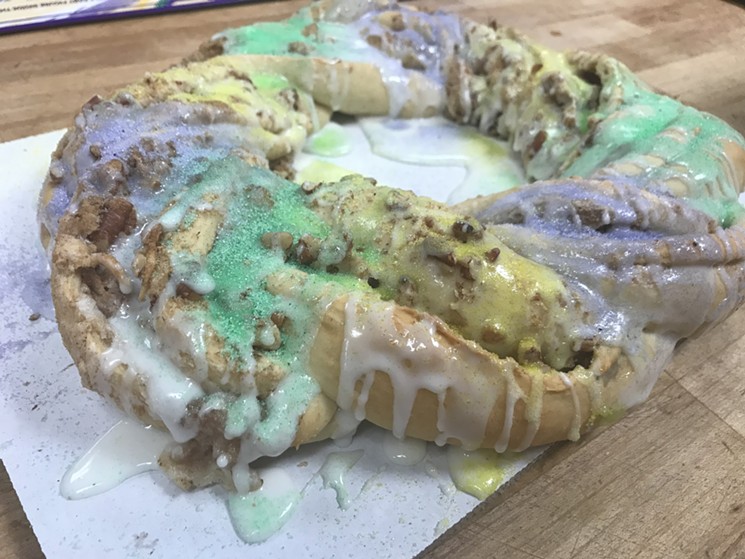 This family-owned "freedom" franchise of The Great Harvest Bread Co.  is owned by couple Dana and Diane Roark and their daughter Heidi. Along with a talented, dedicated staff, they have been turning out a multitude of loaves from freshly-milled wheat and a variety of healthy, hearty ingredients for the past six years. The bakery uses no preservatives and they are very involved with the Katy community, including attending local farmers markets with their new food truck.

Great Harvest has a tempting variety of flavors that purists may eschew, but fans of chocolate and caramel will be in heaven. Customers can choose between the traditional cinnamon, cream cheese, chocolate, pecan and the Turtle King Cake. Chocolate, pecans and caramel on a King Cake? Oui, oui, Fi-Fi.

The scratch-made King Cakes range from $14 to $25, a great deal for freshly made cakes with quality ingredients and they feed 10 to 15 people. Call ahead for your favorite flavors. The bakery also sells King Cake by the slice for $2.50. That's chump change to royalty like yo'self.

The bakery also has sandwiches and Katz coffee. And if you can walk out of the shop without springing for some of the delicious loaves or other treats, you're a stronger person than me. Or sadder.

The pecan praline that we didn't get to taste.
Photo by Lorretta Ruggiero

Some people might look askance at a grocery store King Cake, but we are here to tell you that Whole Foods is doing right by them. Really right. It sells the cakes whole for $15.99 and the slices for $2.99. I was on a taste test trip, so I grabbed a couple of slices, the pecan praline and the Chantilly.

Whole Foods uses restraint with the colored sugar, but there's plenty of tasty glaze. I tried the Chantilly first. Some King Cakes taste more like brioche, but this had a crumb texture between bread and cake. And it was gooood. The Chantilly was one of the best King Cakes I have tried. There was a thin line of custard and a little bit of tart berry filling that tasted like blackberries. Reading the ingredients, I saw that it was made with the "very berry" preserves which includes blackberries, strawberries, blueberries, raspberries, cherries and cranberries. There's no berry left behind. 
That gave me high hopes for the pecan praline. Alas, my taste buds were disappointed, not in the yummy cake, but the dominant taste of cinnamon. There wasn't a pecan in sight and definitely no praline. I was the victim of some cruel mislabeling. This was the cinnamon version. If you love cinnamon rolls, this is for you, but I was overwhelmed by it. However, cinnamon is an aphrodisiac, so the Whole Foods version might make your Mardi Gras even more naughty.

The box is pretty and the inside cake is covered in lurid Mardi Gras-colored sugar. And there's a mess of sweet glaze underneath that. And then a dry brioche. Most of my peeps who tasted it found it to be stale and over-sugared. But, to be fair to Kroger, this one was near its sell-by date. However, I thought it tasted more like the traditional cakes I have had in my twenty-nine (cough) years.

So, no, it's not terribly good, but it's terrifically cheap. At $6.99, you are keeping with tradition and keeping money in your wallet. And the leftovers, of which there will be plenty, might make a tasty bread pudding.

Kroger's King Cake should come with shades.
Photo by Lorretta Ruggiero
There you have it , bayou babies. This is a sampling of our King Cake choices this year. If you have some favorites, let us know in the comments. We are always on the make for King Cake.
KEEP THE HOUSTON PRESS FREE... Since we started the Houston Press, it has been defined as the free, independent voice of Houston, and we'd like to keep it that way. With local media under siege, it's more important than ever for us to rally support behind funding our local journalism. You can help by participating in our "I Support" program, allowing us to keep offering readers access to our incisive coverage of local news, food and culture with no paywalls.
Make a one-time donation today for as little as $1.