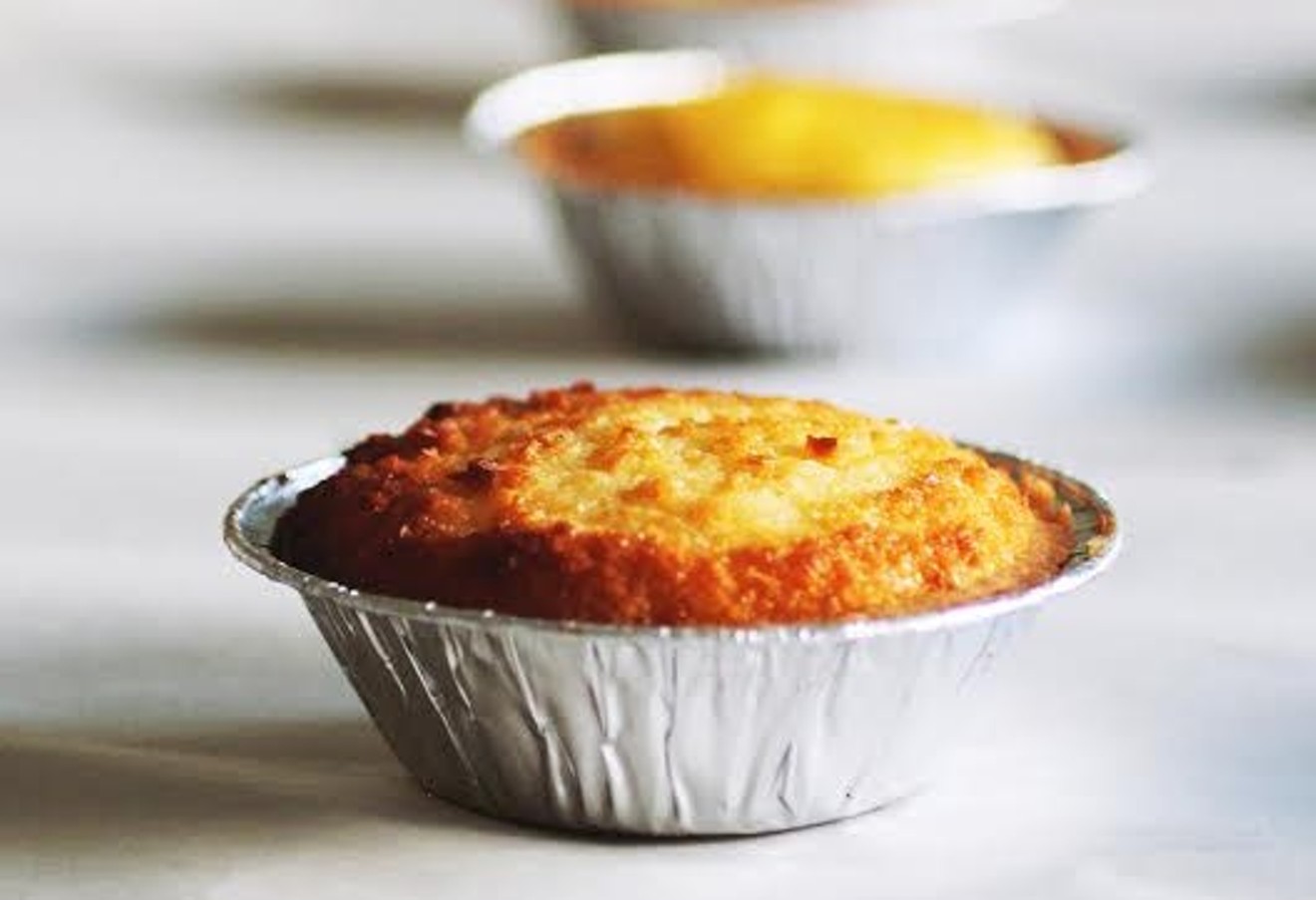 
The Taiwanese pastry chain, 85°C Bakery Cafe, has just opened its second Houston location at 1027 Blalock, catering to the Memorial and Spring Branch areas. While the coffee shop and pastry hub softly opened on August 25 — yes, a day before Harvey’s devastating rains began flooding much of the greater Houston area— the grand opening was just last week. If the success of the first location is any indication, expect long lines and lots of customers vying for a sample of the bakery’s signature marble taro bread, egg custard tarts, sea salt iced coffee and more a.m. treats— though shop does stay open until midnight on Saturday too.

Little Big’s, Bryan Caswell’s restaurant known for its sliders and boozy milkshakes is closing its current location, 4621 Montrose, at the end of September, according to Houston CultureMap. The landlord and the restaurant could not come to an agreement about the lease rate for space in the Chelsea Market complex, said owner Jennifer Caswell. The couple is searching for a new space to house the family-friendly eatery and is focusing on areas like the Heights for a neighborhood feel, with a few menu changes in store.

Meanwhile, we have reported here at the Press that the Caswells’ newest restaurant, Oxbow 7 at Le Meridien was due to open September 19, but Caswell told Culturemap that date will now be September 20. The Caswells devoted much of their time to helping victims of Hurricane Harvey, which delayed the opening.

It's a family affair at ROKO Grill.
photo courtesy of ROKO Grill
ROKO Grill, 406 W. Grand Parkway, had its soft opening on August 12, but its grand opening had to be delayed until September 15 due to Hurricane Harvey. The family-owned restaurant’s food is a mix of South American and traditional American barbecue. The meats are cooked over wood. Sides include Latin favorites like fried yuca and chicharron. The Roko burger has two beef patties and two slices of cheese, but you can up your protein game with a Rookoo burger, which quadruples the meat and cheese. 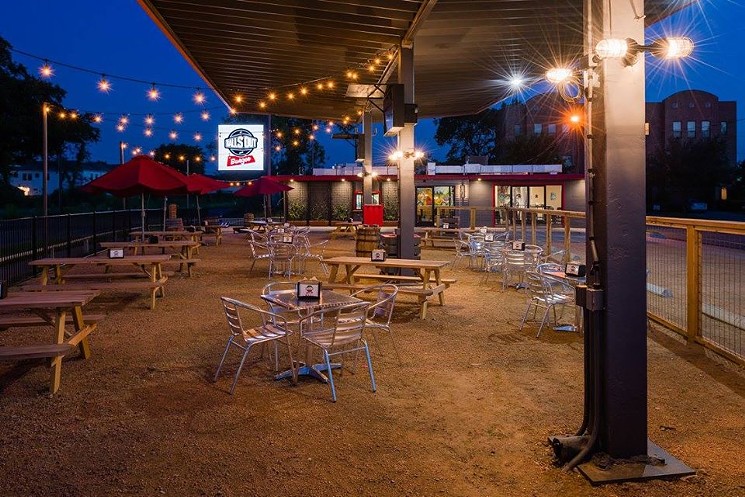 Balls Out Burger has new programs and a great patio for fall weather.
photo courtesy of Balls Out Burger
Speaking of over-the-top burgers, Balls Out Burger 1603 N. Durham, is introducing several new programs for the fall. For the entire football season, the eatery will offer $1 off Saint Arnold’s beer when Texas teams are playing on the television, both college and NFL. It’s also hosting a live music night every Tuesday, 6:30 to 8 p.m., showcasing a new local artist each week. Thursdays are now game nights with cornhole and darts competitions and an upcoming Facebook scavenger hunt.

Prelude Coffee and Tea, the latest venture from Greenway Coffee, opened Downtown on September 29, according to Eater Houston. Located at 609 Main inside Hines Tower, the coffee shop offers a menu of matcha-based drinks, herbal teas, and espresso beverages. There will also be a selection of pastries from sister location Morningstar Coffee and delivered fresh daily.

The River Oaks location of popular happy hour spot, Local Pour, 1952 West Gray, has closed to make way for Weingarten Realty’s plans to build a residential tower in the shopping center, as reported by the Houston Chronicle. Local Pour in the Woodlands is still open at 1900 Hughes Landing.

Cork Café, 25712 NW Freeway, will have a wine inventory garage sale September 25 to September 27. The list of available wines will be on its official website.

Bernie’s Backyard, 22318 Interstate 45 North, no affiliation with Bernie’s Burger Bus, is “suspending operations until further notice” as reported by Spring Happenings. According to Facebook, its infrastructure was affected by Hurricane Harvey. The food truck park offered seating, restrooms and a tavern for customers.

BonFire Grill, 425 W. Main, in Tomball reopened September 5 after refurbishment and the build-out of a new patio. The restaurant is located in a renovated gas station in Old Tomball. They also have a new happy hour from 2 to 5 p.m. daily.

Saint Arnold Brewing Company, 2000 Lyons, has released its newest beer in the Icon series. Icon Red-Marzen is a tribute to the Bavarian festival beer. It’s brewed with 100 percent Munich malt and hops from the Hallertauer region, perfect for Oktoberfest.

Beers in the Icon series have limited release availability, typically three months. The brewery plans on releasing a Milk Stout with Hugo Ortega’s chocolate in December. 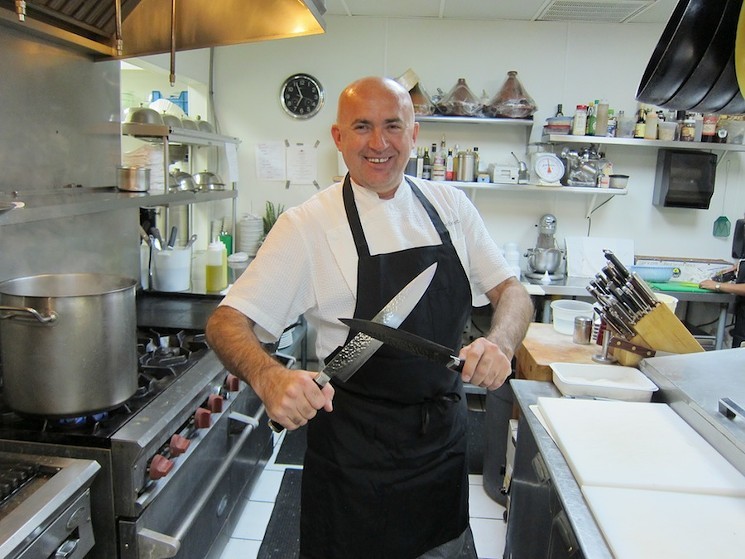 Chef Johan Schuster of Charivari.
Photo by Mai Pham
Charivari has a new Oktoberfest menu for lunch and dinner with German favorites such as pretzels, sausages, and spaetzle. Or try the (say that three times in a row) — broiled pork shank in a dark beer sauce.

Ousie’s Table 3939 San Felipe, along with Yellow Rose Distillery, is wrapping up National Bourbon Month with a four-course all bourbon dinner on September 30 at 7 p.m. The $45 dinner includes some of Yellow Rose Distillery’s award-winning bourbons, but not tax and gratuity. Call for reservations.

OKRA Charity Saloon, 924 Congress, will give part of its proceeds through the end of September to Chris Shepherd’s Southern Smoke Foundation, which is raising money this year for Houston’s food and beverage community affected by Hurricane Harvey. With a generous donation from Newman’s Own Foundation, total proceeds will also benefit AniMeals on Wheels, The Montrose Place, and Community cloth.

Learn to make brisket chile rellenos with Troy Witherspoon.
photo by Carla Gomez
Eight Row Flint’s Outdoor Cooking Series will feature Troy Witherspoon of Buffalo Bayou Brewing along with brisket chile on September 19 and September 26. The upscale icehouse at 1039 Yale will be pouring Buffalo Bayou’s Crush City IPA, with every dollar of the current batch going to victims of Hurricane Harvey.

Izakaya, 318 Gray, will host a Festival of Rosés on September 30, noon to 4:30 p.m. There will be music, a raffle, specialty cocktails, plus wine representatives giving free samples of rosé with bottles available for purchase. Izakaya will provide a selection of free appetizers. The event will benefit the Houston Area Women’s Center, whose resources were stretched thin by Hurricane Harvey. Admission is $25 or a donation of new-with-tag yoga pants.

A new Pita Pit opens the first week of October at 19219 Katy Freeway. The pita sandwich franchise started in Canada in 1995 and expanded to the United States in 1999, offering a variety of fillings rolled into soft pita bread.

The restaurant that was once Cajun Outlaws has now been replaced with El Cuchifrito, 11650 Jones. The restaurant serves Puerto Rican fare and its Facebook page boasts a number of photos of whole pig roasts as well.

Tin Roof BBQ, 18918 Town Center in Humble, has resumed its normal business operations after serving many meals to flood victims and first responders during Hurricane Harvey and coordinating more than five huge truckloads of donations. It’s time to return the love.

They will be participating in the second annual Woodlands BBQ Festival on October 8, 1 to 5 p.m. The proceeds will benefit the Pulmonary Hypertension Foundation.

The popular cheesesteak joint, Texadelphia, is returning to the Bayou City after closing its last two Houston locations in 2015. Branch Sheppard, a Houston attorney, and his wife Hayley have bought rights to a franchise location at 8383 Westheimer, according to the Houston Chronicle. The signage is already up and the restaurant should be open within the month. There are ten other Texadelphia locations around Texas and Oklahoma.

Juiceland, an Austin-based healthy drink chain, is opening its second Houston location this week at 1340 Westheimer, according to Eater Houston. The official opening date is September 23. The juice bar sells smoothies, cold-pressed and packaged vegan meals. A third location is planned for 5310 Kirby. Have a glass of vino and strike a pose at Mascalzone.
photo courtesy of Mascalzone
Mascalzone, 12126 Westheimer, has a new wine director. Jeremy Parzen, an educator and wine writer who contributes to the Press, has designed the restaurant’s by-the-glass program and its new “retail-plus-corkage” wine program, featuring rarities from its reserve wine list. Parzen has lived, worked, and taught in Italy for years. He will be presenting the restaurant’s first wine dinner with Pugliese winemaker, Paolo Cantele on October 11 at 7 p.m. The dinner is $50 per person. Call for reservations.

Mai’s, 3403 Milam, the go-to for authentic Vietnamese cuisine in Houston for 30 years, is, in the words of Roger Daltrey, going mobile. The food truck, with the hashtag , will have its regular home on the UH Main campus, according to Houstonia. The banh mi and Vietnamese fajita wrap are best-selling items that are sold exclusively from the food truck. Find the schedule at mobilemais.com.

Mai’s co-founder, Phin Nguyen, passed away last month at the age of 88.

After 15 years, the venerable Drink Houston, 7620 Katy Freeway, has closed its doors. The closing is being blamed on the loss of revenue due to Hurricane Harvey, as reported by Eater Houston. The bar took to its Facebook page to blame the curfew imposed by Mayor Sylvester Turner and decreased sales for the closure, stating “we have not been able to catch up with our losses.”

The five clubs in one venue had been a popular rite-of-passage for young people celebrating their twenty-first birthdays.

That's it for this week's Openings & Closings. Leave a comment and let us know if we missed something in your neighborhood.