A nationally acclaimed Japanese sushi and steak restaurant is coming to Houston this summer. Roka Akor is slated to open at 2929 Weslayan and features inventive Japanese dishes centered around a robata grill.

The name ROKA comes from two singular words, RO and KA. According to the release, “the meaning of the first word is hearth, a gathering place where people socialize and take in the ambience; the latter stands for a burning fire and projecting energy.”

The award-winning restaurant has received numerous honors and recognition, among them being voted one of the “Top 10 Steakhouses” by the Michelin Guide and mentioned in the “Top 10 Sushi Spots in the United States” by Bon Appétit.

After only two years, Añejo has shuttered. The elevated Tex-Mex restaurant in Uptown Park was famous for its extensive selection of tequila and Mezcal and its high prices. CultureMap Houston reported that Añejo owner Lasco Enterprises issued the following statement from owner Jerry Lasco:

"We are all very sad to have to close Anejo. At the same time, I couldn’t be more proud of our team, from chef Alberto Gutierrez, who created beautiful food and general manager Celina Salinas, who stepped up and provided leadership during challenging times, to the entire restaurant team who worked together every day. We’ve learned important lessons through this process and I’m thankful to have met such great people and fortunate to have them remain in our work family."

The Halal Guys announced the coming of its third store in Houston. A Facebook post broke news of a Westchase location at 11700 Westheimer, where the Verts was in the strip center next to Top It Pizza and Five Guys.

The popular Mediterranean joint originated in New York and opened near Shepherd and Interstate 59 at Farnham in Houston early last year, causing traffic jams, long lines and waits, and loads of Instagram posts, and creating a huge, hungry fan base.

The first two restaurants can be found at 3821 Farnham and 10111 Luetta in Vintage Park. The Halal Guys are known for meat and rice plates made with gyro and/or marinated grilled chicken and drizzled with signature white and hot sauces. The grand opening date will be announced on social media, so stay tuned.

Peli Peli operating partner Thomas Nguyen asked if Katy was ready for the coming of the next Peli Peli on Facebook. The team at Peli Peli is bringing South African cuisine to LaCenterra in Cinco Ranch in May. Nguyen told the Houston Press that this outpost is special to him and his family because Katy is where he calls home. “I graduated from Mayde Creek in 1994 and have lived in Katy since 1979,” he said.

This will be the third actual Peli Peli restaurant in the Houston area; the original is located at 110 Vintage Park in Spring, and a second is located at 5085 Westheimer in the Galleria. Peli Peli Kitchen, the fast-casual outpost, can be found at 9090 Katy Freeway, and the latest addition, Peli Deli, just opened last month downtown at 808 Travis inside the Esperson Building. 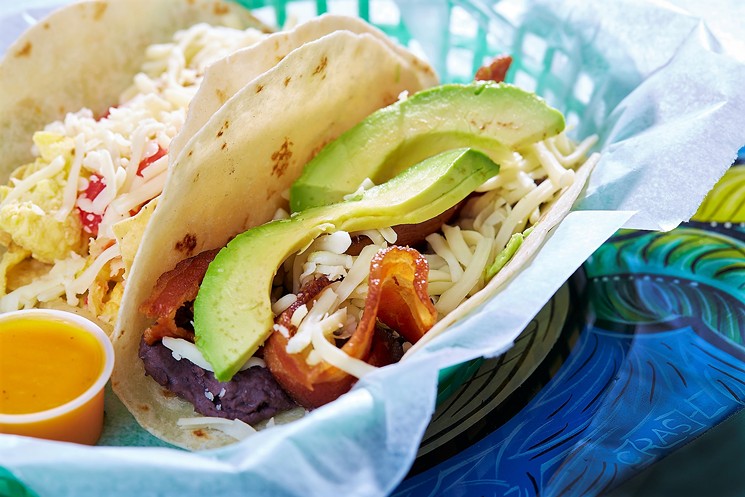 Tacodeli opens its doors on April 11 to much anticipation from fans.
Photo courtesy of Tacodeli
Austin-based Tacodeli is opening on April 11 at 1902 Washington. Chef and founder Roberto Espinosa and partner Eric Wilkerson’s popular neighborhood breakfast and lunch spot will feature more than 40 made-from-scratch tacos with locally sourced and/or organic ingredients.

The spot includes a covered outdoor patio and will offer daily specials, vegetarian and seafood options, salads, soups, sides, and award-winning starters and salsas, including a Tacodeli original, the Salsa Doña, a jalapeño garlic salsa. All menu items can be served gluten-free and ordered on corn tortillas.

The Kirby Group partner Steven Salazar told the Press to expect a mid-April opening of the much-anticipated Heights Bier Garten at 1433 North Shepherd at the corner of 15th Street. The Kirby Group, which also operates Wooster’s Garden and upcoming Worcester’s Annex, has been working on this project for more than a year. 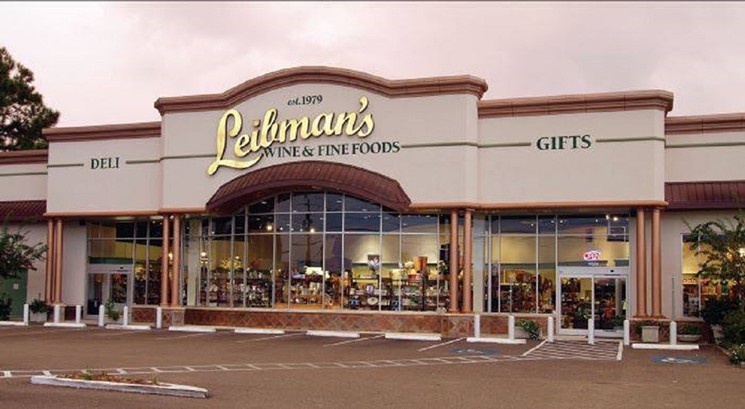 Longtime wine and fine foods, Leibman's is closing, but opening a new location soon.
Photo courtesy of Leibman's
After 37 years, Leibman’s Wine & Fine Foods announced the closing of its 14529 Memorial store. A “retirement” party was celebrated with friends, family and cake on March 29.

Along with news of its closure, the store announced the upcoming opening of its new store at 10100 Katy Freeway on the northwest corner of Gessner and the Katy Freeway. The new location will feature the same deli, dine-in and to-go options, catering, gift baskets, import groceries and wine.

The statement goes on to say that “the torch for this new venture has been passed to Sharon Leibman, daughter of current owners Ettienne and Ralph Leibman. Sharon has been the general manager for the 14529 Memorial location for 10 years, and is excited to carry on the Leibman's tradition at the new location in the next few months.”

Class 502 opened its second store at Marq*E, the outdoor entertainment and shopping center at 7620 Katy Freeway, next door to Rocket Fizz Candy & Soda Shop. The shop is known for its rolling ice cream creations and boba tea and shaved ice. The first Houston location opened last March and can be found in Bellaire’s Chinatown at 9889 Bellaire, Suite 220.

Justin Yu, Bobby Heugel and Steve Flippo’s Better Luck Tomorrow will debut late April at 544 Yale in the Heights. According to the release, “BLT,” for short, will feature ten casual dishes from Yu and ten Gulf Coast-inspired cocktails from Heugel.

Yu described the food as stuff "we’d make for ourselves and our friends on our day off." Expect food service until midnight and two large first-come, first-served outdoor patios.

Yahoo Finance News reported that Lubbock-based Abuelo's Mexican Restaurant will open its first restaurant in the Houston area on Monday, April 10. Located at the Shoppes at Parkwest at 24600 Katy Freeway, the store will be the company's 39th location nationwide.

Abuelo’s is known for its authentic, made-from-scratch Mexican cuisine. The restaurant is 7,600 square feet and will include an outdoor, climate-controlled patio.

The grand opening event is offering the first 100 guests who are seated beginning at 11 a.m. on April 10 a special "Savor the Flavor of Mexico" calendar that includes offers for free items, monthly, April through December 2017. The calendar includes offers valued at more than $100.


Café Azur launched lunch service on April 4. The lovely French restaurant at 4315 Montrose near Richmond is now open from 11 a.m. to 3 p.m., Tuesday through Saturday, with a menu that includes appetizers, salads, tartines, house-made pastas, entrées and homemade desserts.

Owner and chef Sidney Degaine’s cuisine is classic French and is inspired by his upbringing in Nice, France. Dishes like the duck pot pie, a thinly sliced and layered puff pastry, filled with mashed potatoes, foie gras and duck confit meat, served with a mixed green salad, are sure to please.

Regular dinner hours are still in place. Enjoy $5 mimosas during brunch on Sundays and a rosé special on Wednesdays, and celebrate on Thursdays with mussels and chardonnay. Reservations are recommended at 713-524-0070 or on Open Table.

Dallas-based chef John Tesar is rumored to be opening his steakhouse Knife in Houston, according to Eater Houston. The article mentioned the DoubleTree hotel at 400 Dallas as the possible site for the restaurant.

Rim Tanon, whose name means “roadside” in Thai, is the new sister restaurant of local favorites Thai Cottage, Blue Fish House and Time for Thai, and opened its doors on March 31. Chef Nunnapat Triwatkhunakon has designed a menu to please diners in search of an adventurous blend of the traditional with modern interpretations of Thai dishes paired with wine and cocktails.

Mike Tran, the mastermind behind Mein, Tiger Den, Night Market and the brand new Ohn Korean Eatery, posted a teaser for his newest concept, a poke shop called Laki Fish on Instagram this week. The restaurant is coming soon this year next door to its sister, Tiger Den, in the Dun Huang Shopping Center at 9889 Bellaire, Suite D-228.

The Chronicle included news of IHOP (International House of Pancakes) leasing 4,588 square feet in Brazos Town Center at U.S. 59 and FM 762 in Rosenberg in its latest business and real estate report. Also mentioned are plans for Center Court Pizza & Brew to open in a 3,540-square-foot location in Friendswood's Fountains Plaza building at 2111 West Parkwood.

That's it for this week's restaurant openings and closings! Leave us a comment or send us an email to let us know if we missed something.