Dish of the Week: Tarte Flambée (or Flammkuchen) 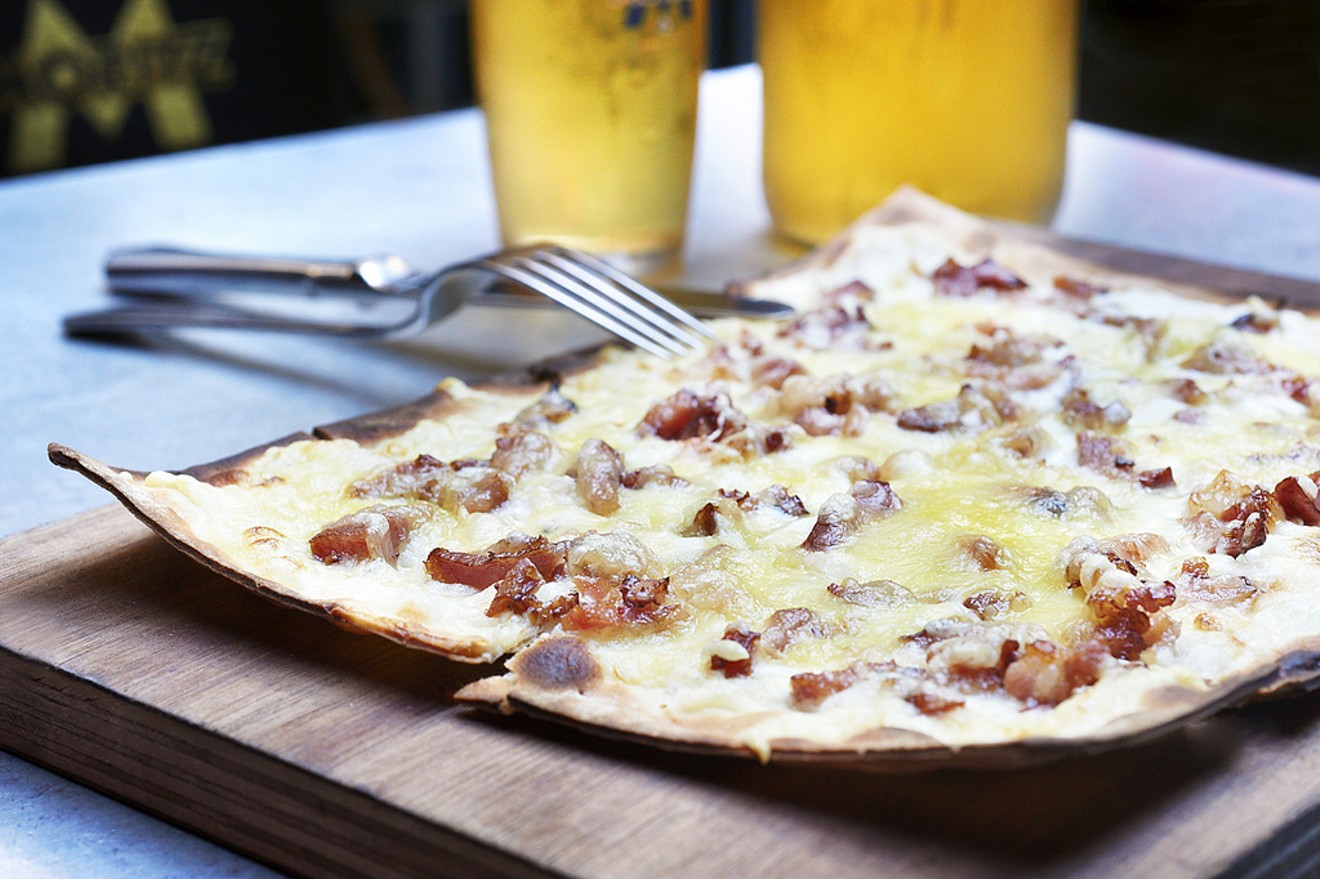 Tarte flambée may just be your new favorite pizza. Photo by Moritz Barcelona
From classic comfort foods to regional standouts and desserts, we'll be sharing a new recipe with you each week. Find other dishes of the week here.

This week, we’re sharing a recipe for tarte flambée.

Popular in the Alsace region of eastern France, tarte flambée translates to “pie baked in the flames.” It is also popular in the bordering region of southern Germany, where it's called flammkuchen, meaning “flame cake.” Think of it as like an extremely thin crust pizza, made with thinly rolled dough slathered with fromage blanc (a fresh, spreadable white cheese) and/or crème fraîche, sliced onions and lardons (small cubes of pork fat). As both names suggest, the dish is traditionally cooked in a wood-fired oven, the intense heat of which scorches the dough in about a minute.

Originating as a peasant dish, the flatbread was made using leftover scraps of dough, which would be rolled thin, covered with cream and baked either as a way to test the heat of the oven before baking bread or to make use of the oven's remaining flames. Eventually, year-round ingredients like fromage blanc, onions and lardon were incorporated.

This recipe, from Serious Eats, calls for a mixture of fromage blanc and crème fraîche, but if you have trouble finding fromage blanc, you can substitute the entire mixture for equal parts cream cheese and buttermilk. The recipe also calls for a baking steel or pizza stone (to help achieve the enviable crisp of a wood-fired oven).

Directions
Set Baking Steel on oven rack 6 to 8 inches from broiler and preheat oven to 550°F (or highest possible setting) for one hour.

Meanwhile, in a large bowl, whisk fromage blanc with crème fraîche until thoroughly incorporated. Season with salt and pepper, whisk in nutmeg.

Working with one piece at a time, set dough on a lightly floured work surface. Using your hands and/or a rolling pin, work dough to a thin, roughly 10- by 5- inch oval. Transfer dough to a pizza peel.

Slide pizza onto baking stone and bake until toppings are browned spots and crust is golden brown and puffed, 3 to 5 minutes. Serve immediately, and repeat with remaining dough and toppings.