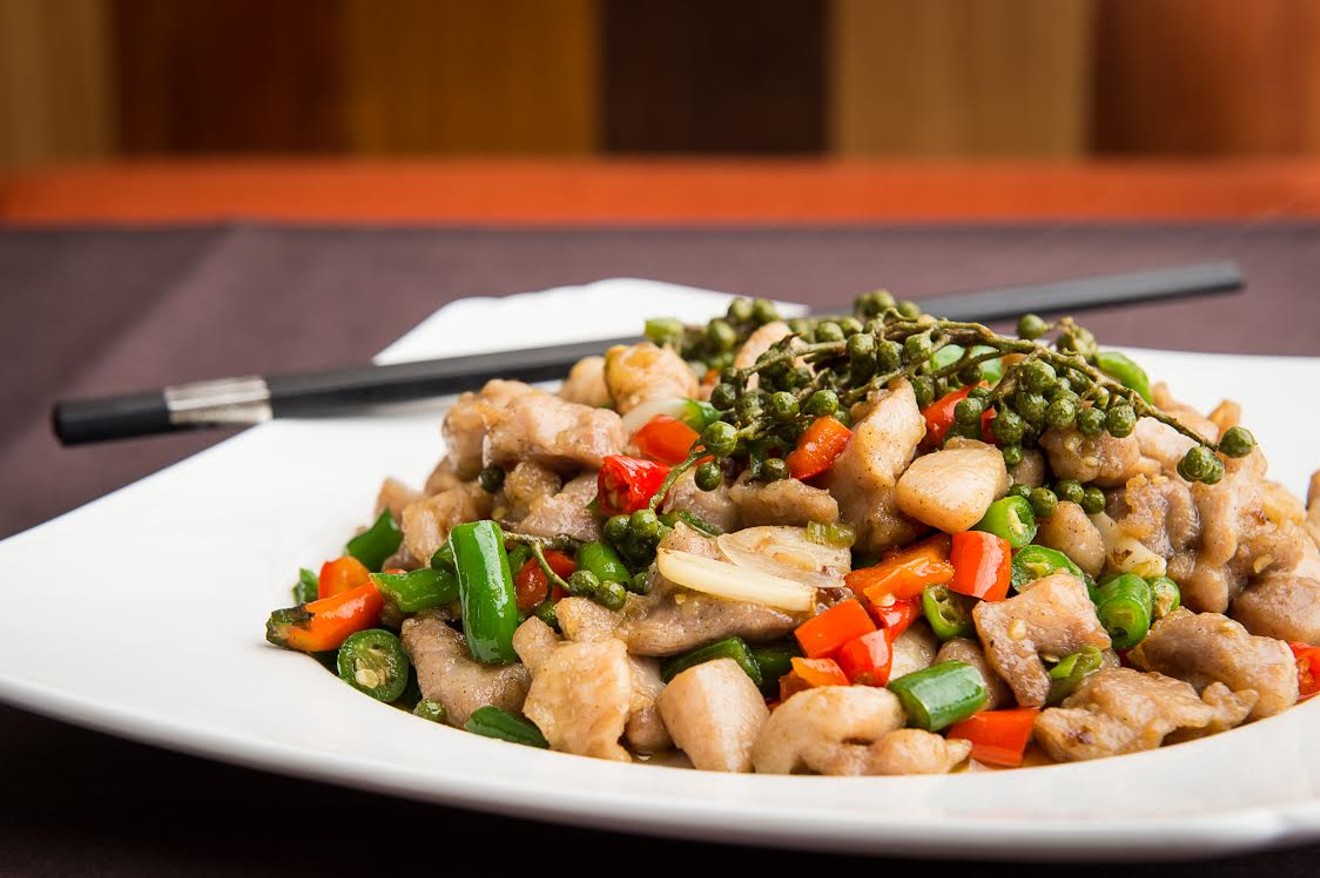 The Pepper Twins Chicken will keep you coming back for another bite. Photo by Chuck Cook Photography
I always make it a point to try at least one item that is recommended by the server, prefacing the request with a genuine trust bestowed upon him/her to guide me as a fellow diner and not as an opportunity to sell the most expensive item on the menu. This practice seems to work better at places like Pepper Twins than at more high-end restaurants. Upon the suggestion of the server, we ordered the Pepper Twins chicken, the first item on the specialty list.

In the margin next to the dish were two pepper symbols, denoting the level of spice, which looked like it fell somewhere in the middle between a simmer and a burn with its “pepper and fresh nine-leaf peppercorn.” Fair warning for adventurous diners who love the thrill of the spice: Szechuan peppercorn spice is different from Louisiana hot sauce-hot, and although it’s not like the ghost pepper’s try-to-burn-a-hole-through-your-insides hot, it does something to your palate that may throw you for a loop.

The first three pieces of the chicken were full of flavor and the spice hit just the right notes. The white pepper, fresh green and red Thai peppers and bunches of peppercorn still attached to the tiny stems were a wonder to see on the plate. After the third bite, the ride began. While not the hottest thing ever, it will certainly constitute one of the strangest gastronomic experiences your senses will endure as you sidestep the weirdness, hate it for a millisecond and raise your chopsticks for another bite.

Pepper Twins, named affectionately for owner Yunan Yang’s two children, who are indeed not twins yet share a love of spicy Szechuan food, opened in late September 2016 next to a Walgreens drugstore in a River Oaks strip center at 1915 West Gray. The interior is bright, uncluttered and clean. Some walls are painted red, while others are stenciled with black silhouette images depicting life in northern China under pagoda-style rooftops and villages sprawling up the sides of mountains.

The Asian-inspired hanging-lantern lights are thoughtfully spaced and become another element of art in the dining area that really can’t be appreciated unless your arrival coincides with the few minutes of calm and quiet as its doors open before a herd of hungry, spice-loving Houstonians coming in for lunch. But in those few minutes, I found the secret of Pepper Twins’ charm and appeal, the quiet message behind the smiles and the magic that sizzles in woks in the kitchen.

Upon arrival, guests are treated to a complimentary finger bowl of seasoned wonton strips that will inevitably and quickly empty before your eyes.

One of the most interesting cooking techniques is demonstrated in many Szechuan dishes described as “boiled” on the menu. The hot sauce and boiled beef was a perfect example of this method. Doubanjiang (spicy bean paste), along with other spices and Szechuan peppercorns, is used along with water in this simple yet complex execution of stir-frying. Pepper Twins’ version uses Angus-certified lean cuts of beef, sliced into irregular pieces (some are thin strips; others are thicker, larger, bite-size slices). The boiled beef arrived in a large soup bowl with a generous portion of protein and Napa cabbage swimming in a red oily broth. Cooking down the doubanjiang and spices creates this signature Szechuan spicy red oil.

The dry fried green beans and fried rice were ordered to evaluate Pepper Twins’ prowess at delivering standard Chinese fare. The green beans were exactly how they should be at any good Chinese joint in Chinatown, wrinkled, green and smothered in bits of garlic and white pepper just long enough for a tender yet al dente finish.

Sadly, on two separate occasions, the fried rice just did not meet expectations. On the first attempt, large clumps of steamed rice were left hiding beneath the fry-ness. The rice was tossed with a dozen or so large shrimp, egg omelette, small bits of cut pineapple and frozen peas and carrots. I don’t believe the batch of day-old rice made it into our fried rice; the rice we had was on the verge of being mushy. Logistically, as busy as the place was, it would be difficult for the kitchen to have enough fresh steamed rice on hand, let alone allow it to cool for a proper frying.

On the second occasion, the fried rice was ordered again to check for consistency. Again, multiple large clumps of steamed rice, still white and untouched by the soy sauce, appeared on the plate. The texture had improved from the first visit and we were satisfied with the taste, but overall it may be best to stick with the steamed option that accompanies each main entrée. 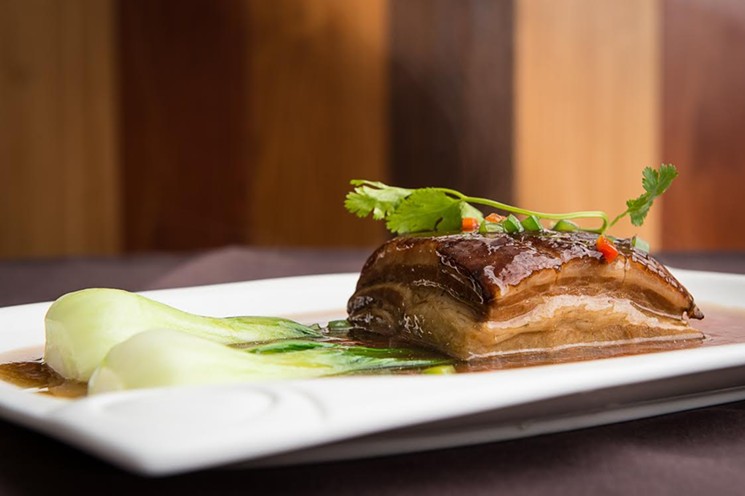 The Soft Square Bacon is accompanied by two pieces of baby bok choy.
Photo by Chuck Cook Photography
One of the standout dishes was the Soft Square bacon, the name succinctly capturing the essence of the rectangular masterpiece presented alongside two pieces of baby bok choy. The rendered fat glistening off the top of the Berkshire pork belly spilled over the sides and shimmered across the thin pool of soy and five-spice-based sauce.

One of the charming nuances about Pepper Twins is the very literal and descriptive names of its dishes. Reading over the menu, I was reminded of an anecdote about my father. As an immigrant from Vietnam, my Vietnamese-speaking Chinese father found himself lost among the skyscrapers in Chicago’s bustling downtown area many, many years ago when he first arrived in the United States. He had a pocket dictionary that used the northern Vietnamese dialect, which is more formal than our southern slang. When he looked up the literal translation of the phrase lac duong (which means “I’m lost”), he found the words “peanut” and “sugar.” Needless to say, it didn’t help him to yell “Peanut sugar!” at strangers passing by.

I smiled at the Fish Loves Tofu and Jumping on the Mountain dishes, but completely understood and appreciated the imagery that these descriptions conveyed. We chose the Dancing Squid from the Chef’s Recommendation section. 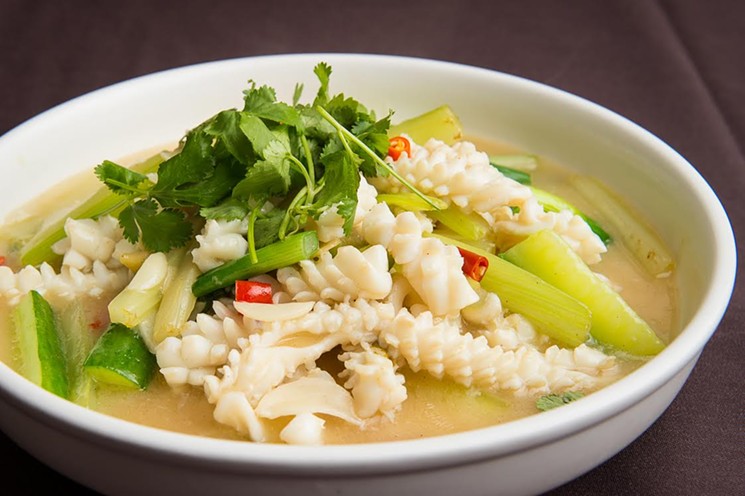 The Dancing Squid is cooked in such a way as to reveal a beautiful pattern.
Photo by Chuck Cook Photography
The slices of squid were scored diagonally on one side so that when cooked, they would curl up to reveal a beautiful pattern, like tiny dancing legs. The light sauce that covered the squid and veggies was uniquely savory. Two pepper symbols adorned this item on the menu, and rightfully so. The pickled banana peppers were semi-spicy and tart, which we loved, but we treated the sliced Thai peppers like garnish and moved them to the side of the plate. Large cut cucumber spears and thinner julienned pieces of celery joined the squid in this playful dish. I am not a fan of cucumber in stir-fry, but I didn’t mind too much in this one.
As for beverages, Pepper Twins is a BYOB establishment, at least for now. There’s a $5 corkage fee for each wine bottle. We ordered the iced honey lemon tea upon the recommendation of the server, and it was incredibly tasty and refreshing. I never finish my glass of water at dinner, but the tea went fast, especially with all that Szechuan peppercorn spice tingling on my lips.

Our visits to Pepper Twins were enjoyable, but we felt very rushed, not necessarily by the staff but by a long line of hungry people standing, sitting and pacing in the aisles for to-go orders, and the atmosphere of waiting altogether just weighs a diner down. The smiles that greet you at the door turn frazzled halfway through the meal. We had to flag down our server a couple of times on one occasion for water refills.
This is the kind of food diners want to share emotions about; lingering over bites debating the soul and spice of Szechuan is magical. I’d like to return on a slower night, but am not sure if that currently exists for Pepper Twins. 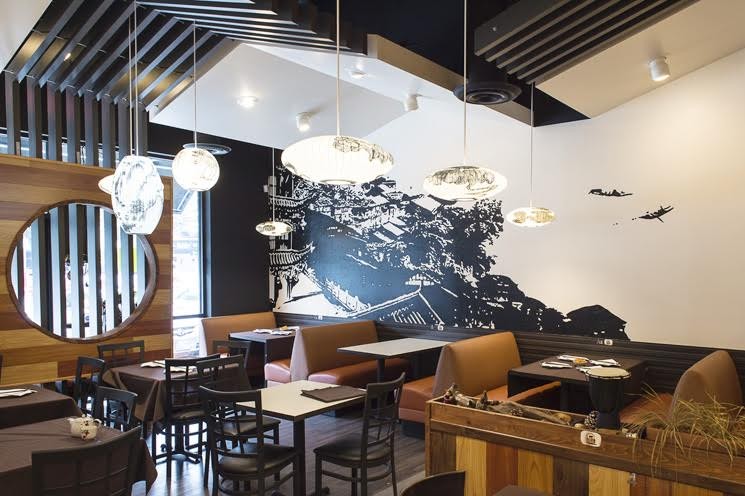 The interior is bright, uncluttered and clean.
Photo by Chuck Cook Photography
KEEP THE HOUSTON PRESS FREE... Since we started the Houston Press, it has been defined as the free, independent voice of Houston, and we'd like to keep it that way. With local media under siege, it's more important than ever for us to rally support behind funding our local journalism. You can help by participating in our "I Support" program, allowing us to keep offering readers access to our incisive coverage of local news, food and culture with no paywalls.
Make a one-time donation today for as little as $1.