Hungry Heroz Shows It's More Than Just A Food Truck 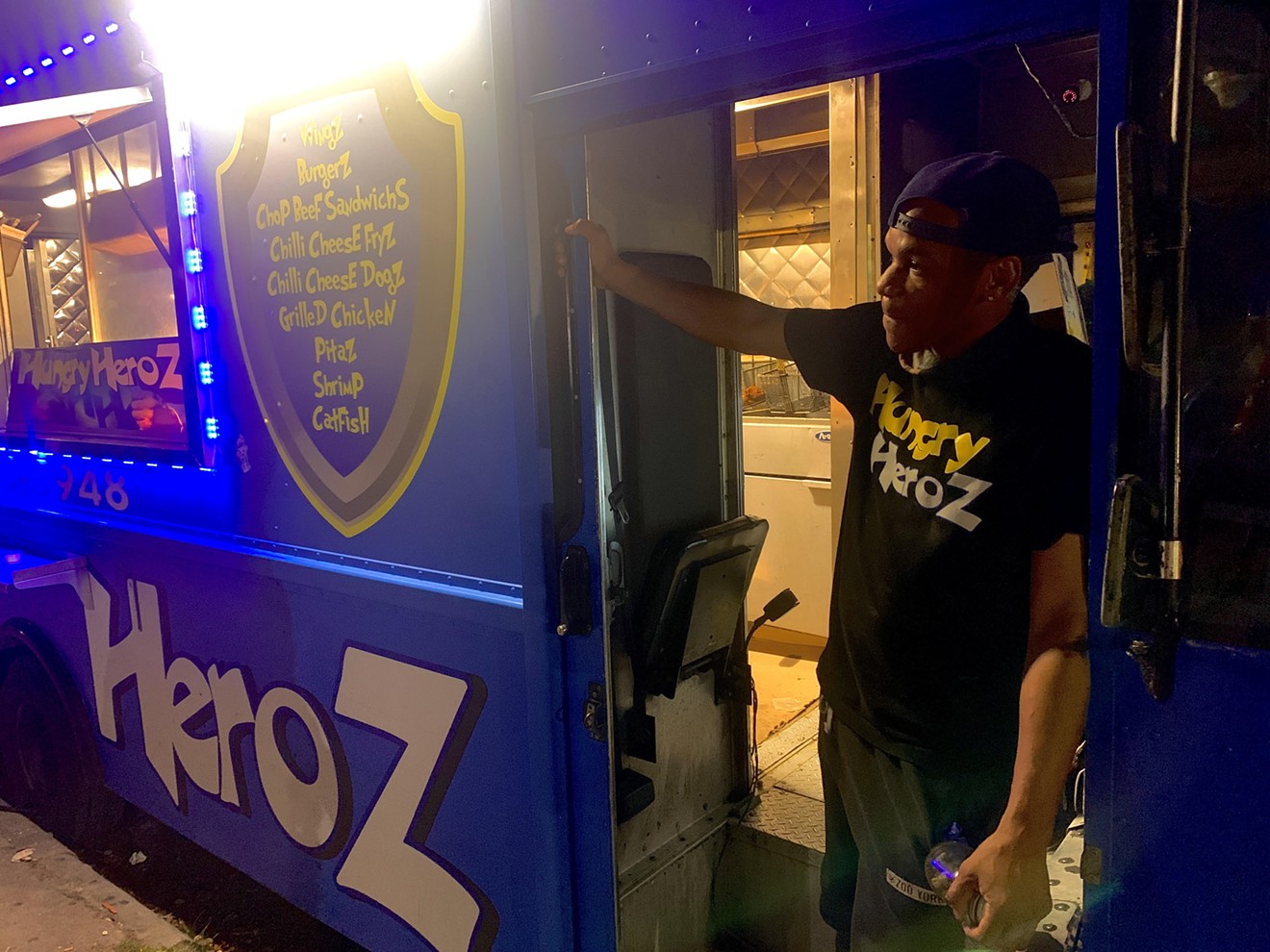 Justin "Lucky" Williams uses his passion for food to help the local Houston community. Photo by DeVaughn Douglas
There’s an unusual chill in the summer air as the 2 a.m. closing crowd shuffles out into the parking lot of D Bar and walk to their vehicles parked along Emancipation Ave. Cars pull around the small lot and circle as people gather under the lights of a blue food truck sitting against the sidewalk. Outside you can hear people laughing as music plays from the windows of a jeep idling nearby, but inside the truck the only thing that can be heard are the workers shouting orders back and forth over the sound of oil bubbling in the fryers.

In the center of it all is Justin “Lucky” Williams, who switches back and forth between taking orders, cooking, answering phone calls, and keeping the peace amongst all the guest waiting for food.

“I’m going to be here until about 3 or 3:30. It’s a slow night,” he hurriedly explains in between calling out orders to his crew. “Once we serve the last person here then we’ll get started.”

About an hour later as things further slow down, Williams motions to one of the cooks to start a fresh order. The fryers fizz back to life as she places baskets of fish and French fries in hot oil. He then hops off the truck and greets a vehicle pulling up. There’s a quick conversation between the two as the driver hands Williams a case of water before driving off into the night.

Williams leans against the food truck and lets out as sigh as he looks at his last few customers heading to their vehicles.

“That should just about cover it,” he says out loud to himself before letting down the cover that protects the truck's pickup window. Two large, blue letter H’s are painted on the cover, made to look like the S on Superman’s chest as he rips open his suit before flying to someone’s rescue. Emblazoned across the bottom of length of the food truck in bold yellow and white letters are the words Hungry Heroz. Williams jumps back on the truck as his staff finish stacking individual meals in cardboard boxes. After making sure everything is secure, he shifts the truck out of park and the neon lights running along the top of the food truck light up the early morning darkness as the vehicle heads downtown. 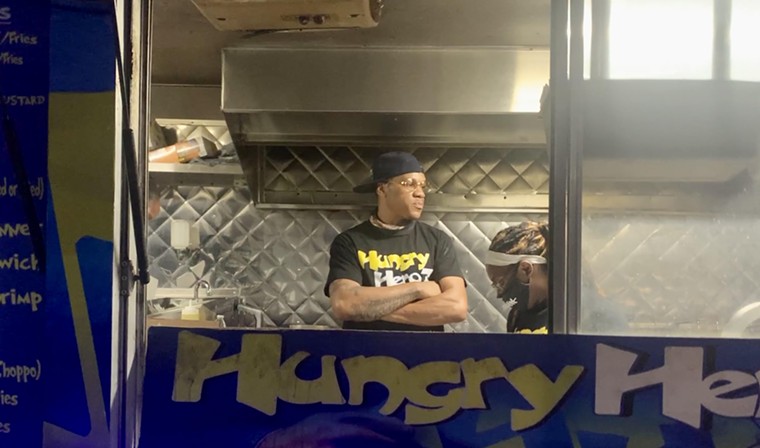 Williams takes a quick break after feeding the late night crowds.
Photo by DeVaughn Douglas
Williams is from Detroit and came to Houston around 2004 to attend Texas Southern University. Once here he started working as a supervisor at Frenchy’s. Spending time in the acclaimed restaurant gave Williams the opportunity to learn the business but he still wanted to do more.

“They taught me a lot but I’m the kind of person that likes to work for himself. I wasn’t sure what I was going to get into, but I knew I wanted my own business. I was always worried about failing and figured, if that's going to happen, I don’t want to take anyone else with me. So I started looking at small businesses I could do on my own.”

While trying to decide what he wanted for the future the future found him when Williams stumbled on a discovery in a junkyard.

“I was in this area with a bunch of warehouses, and I was looking to get parts for my old car. I made a left when I should have made a right and that’s when I saw my first food truck. It wasn’t finished. It took me a few months to get it all put together but it was what I needed at the time," laughs Williams as he shifts into a new gear and slows down to search the street.  "When it was finally finished, I had $100 to my name, but it was mine.  I had $60 in fives and $40 in ones. If someone came with $100 bill that night, they would have broke me. I wouldn’t have been able to sell that night.”

In fact, his night went well enough that he wanted to figure out a way to show thanks. It’s showing thanks that has Williams driving through downtown Houston at almost four in the morning. As he drives through cops, bouncers at after hours clubs, and nightclub staff getting off work wave at the familiar sight of the big blue food truck moving through the city streets. It crawls to a stop near the Toyota center and the first customer lines up.

“What do y’all have today?” asks a homeless man as Williams reaches into the box and hands him a container and a bottle of water.

“Today we have fish and fries,” he responds as a line of people quickly forms in front of the truck.  Williams’s crew quickly starts handing out plates of steaming hot food as he speaks to the first man about his day. In about three minutes 20 people are given food and Williams starts the truck up to head to the next of many spots for the morning.

“That day ten years ago … that was the first day I was operating. I kept thinking what I could do to give back,” remembers Williams as he cruises through the streets looking for groups of hungry people. “I thanked God and said that as long as he kept helping me out with the business, I would help other people. I’ve been feeding the homeless every day, ever since.”

Ever since means for the last ten years Williams has been working a full shift feeding paying customers and the hitting the streets in the early hours to feed his other customers for free. To date he estimates that Hungry Heroez has served well over 350,000 meals to the Houston homeless community.

“They are people man. They have stories and lives. And the truth is they help me just as much as I help them. Sometimes I run new menu ideas past them, and they give me good advice. Plus, it’s not just me helping. I have customers that stop by and drop off cases of water or make sure to pay a little extra when they pick up their food because they know it’s going directly to the cause”

Williams and his crew prepare meals and deliver them to the homeless every night after work.
Photo by DeVaughn Douglas
It is easy for customers to support the cause when Hungry Heroz continues to offer a variety of Coney Island style food for the late night. The menu consists of wings, tenders, burgers, catfish plates, shrimp, and loaded baked potatoes but specials, a lot of times based on the advice of his early morning clientele, pop up on the menu often. Items like lobster tails, grilled chicken pitas, waffles, and more show Williams is open to always trying new things to keep the customers coming back.

“At the end of the day I’m just trying to support the city the way the city has supported me. A lot of people helped me to get here, and I just want to give back.”
KEEP THE HOUSTON PRESS FREE... Since we started the Houston Press, it has been defined as the free, independent voice of Houston, and we'd like to keep it that way. With local media under siege, it's more important than ever for us to rally support behind funding our local journalism. You can help by participating in our "I Support" program, allowing us to keep offering readers access to our incisive coverage of local news, food and culture with no paywalls.
Make a one-time donation today for as little as $1.