Le Colonial wine director Trevor Wiedeman Photo by Daisy Ruiz.
Governor Greg Abbott has provided little guidance to Texas restaurateurs who began reopening their businesses for dine-in service beginning last week. As a result, many are looking to Georgia governor Brian Kemp’s restaurant guidelines as they resume operations. But even the Georgia order makes no mention of wine service and how to keep sommeliers and servers safe as they pour and consumers safe as they drink. At least one restaurateur told the Houston Press last week that his restaurants would not reopen until later this month because his parent company felt that sommeliers and other floor staff would be at risk without widely embraced standards.

Of the scores of restaurants that began offering dine-in service starting last Friday, many have fine wine programs. All of the floor sommeliers the Houston Press spoke to last week agreed that one of the most important elements for safety is to wait until guests check in before setting their tables with stemware. Trevor Wiedeman, the general manager and wine director for Le Colonial, said that he doesn’t even set the table with wine glasses unless the guests request wine service. This eliminates a contact point and reduces the number of wine glasses that need washing, he explained. 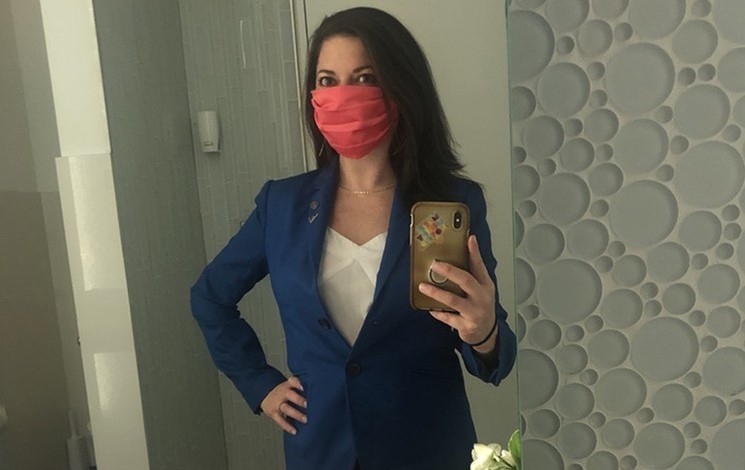 At Doris Metropolitan, wine director Lexey Davis Johnson wears a mask throughout dinner service like every sommelier contacted for this post. But she doesn’t wear gloves. Instead, she washes her hands and then sanitizes them using hand sanitizer before she sets every table. She repeats the process before she sanitizes the bottle. And then repeats it once more before presenting the wine. “My hands are cracked,” she said, “from washing them so much.” While Johnson allows the guests to pour their own wine after she offers the initial taste and pours the first round of glasses, Potente wine director Vinny Montecuollo asks his guests to share their comfort level. He’s happy to pour the wine for them throughout dinner, he said, but if they prefer to pour it themselves, he allows them to do. Potente wine director Vinny Montecuollo
Photo by Ronaldo Cuadra.
One of the major challenges, said Montecuollo, is the wine list. In order to avoid wasting paper that needs to be thrown away after its been handled by a guest, he’s condensed his 500+ lot wine list down to roughly 60 wines that fit onto one sheet. While the more expensive wines are still available, he now focuses on his program’s best-value bottles and has been pleased with the response. With the one-page list, “my sales sky-rocketed,” he said. Similarly, Wiedeman said that he uses a condensed, single-page offering. But in order to reduce waste, he tries to help his guests choose a bottle without a list and offers a hard copy only if requested. Backstreet Café and Hugo's wine director Sean Beck
Photo by Sean Beck.
H-Town Restaurant Group sommelier and beverage director Sean Beck said that Backstreet Café and Hugo’s will begin offering dine-in service Thursday, including wine. Like other sommeliers and servers, his team will all be wearing masks and gloves and they will wash and then wipe all stemware down with a sanitary solution before tables are set. But he also noted that he meticulously wipes down all bottles when they arrive from the distributor’s warehouse. “I want to make sure they’re clean when they get to us and clean when we serve them to the guests,” he said, adding that they are wiped down once again before service.

A number of the sommeliers who were contacted for this post said that they are hoping to implement online wine lists that will allow their guests to select their wines before they arrive for their meal. This will help to mitigate waste, they noted, and it will eliminate a contact point during service.

“This is new to all of us,” said Montecuollo. “We’re all figuring it out as we go.”
KEEP THE HOUSTON PRESS FREE... Since we started the Houston Press, it has been defined as the free, independent voice of Houston, and we'd like to keep it that way. With local media under siege, it's more important than ever for us to rally support behind funding our local journalism. You can help by participating in our "I Support" program, allowing us to keep offering readers access to our incisive coverage of local news, food and culture with no paywalls.
Make a one-time donation today for as little as $1.

Jeremy Parzen writes about wine for the Houston Press. A wine trade marketing consultant by day, he is also an adjunct professor at the University of Gastronomic Sciences in Piedmont, Italy. He spends his free time writing and recording music with his daughters and wife in Houston.
Contact: Jeremy Parzen