It's time for the Mardi Gras and there's no better way to celebrate the excess of pre-Lenten festivities than a traditional King Cake. Okay, maybe a couple of Pat O' Brien- style hurricanes and some spice-loaded, boiled crawfish would be preferable, but for many Louisiana transplants and East Texans who identify strongly with the Cajun and Creole culture, the king cake is obligatory.

The tradition of the king cake is celebrated in a number of countries, but the Gulf Coast Mardi Gras king cake parties start with the Epiphany, January 6, and continue until Fat Tuesday, the day before Lent begins on Ash Wednesday. The cakes are named after the Three Kings who visited Jesus, so many have a plastic baby inside to represent the Christ Child, or sometimes, a coin or bean. Whoever finds the trinket gets to be King or Queen of the party. They are also obligated to throw the next king cake party, so if you find the prize, you might want to slip it onto cousin Boudreaux's slice. He never pays for anything.

This year, Fat Tuesday is February 13. For those who are giving up booze and chocolate for Lent, you might want to celebrate Valentine's Day ahead of time.

Many Houstonians have suffered through the cardboard texture of boxed grocery store cakes, with the purple, green, and gold all running together in a melted icing mess. Well, we have found some New Orleans-style king cakes and some not so traditional spins that will add a little quelquechose to your fete.  Put on your sunglasses, because these cakes are bright. This well known family-owned bakery started with the three Jucker brothers who survived the Holocaust and a Nazi concentration camp and later immigrated to the United States from Poland. They opened their first Houston bakery in 1949 and have been providing challah, rye bread, and custom cakes to the Houston community ever since.  The business is still run by Robert Jucker and despite some recent hardships after Hurricane Harvey flooded the Braeswood location, the bakeries are turning out a number of variations of the king cake for this year's celebrations.

The more common version, available with cream cheese or fruit flavors, is available in regular, large, or party. (We say, go party). Or, you can opt for the king cake cheesecake, with a sweet king cake crust and colored sand sugar on top. Three Brothers also offers king cake cupcakes and petit fours.

They can be purchased in-store or online, but for special or unique requests, call the bakery. There are three locations. 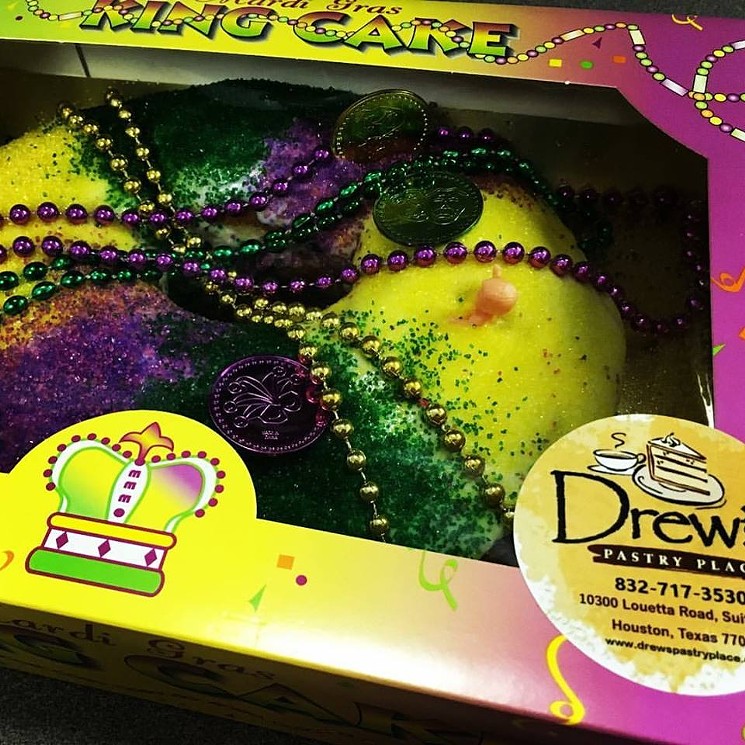 Houstonians on the Northside know that Drew's Pastry Place is the spot to get Italian cookies and pastries. Growing up in an Italian family, owner Drew Rogers eventually decided to follow his passion and become a pastry chef. His king cakes are made with the traditional New Orleans brioche dough, a recipe he got while working alongside a former Commander's Palace chef from New Orleans who had been displaced after Hurricane Katrina. Tweaking the recipe a bit, he has created his own version, with cream cheese and cinnamon, or fruit flavors like strawberry and apple. He even creates a king cake with his famous cannoli filling.

Mini king cakes with a coin for prosperity.
Photo courtesy of Drew's Pastry Place
For those not wanting to commit to a whole cake, Drew's offers mini king cakes, filled with cream cheese.

As an aside, Drew Rogers' original family name was Ruggiero. Wife Carla says that he's considered changing his name back to Ruggiero. We think that's a great idea! It's a good name.

Hannah Hofrichter started baking challah with her mom as a kid and that weekly event turned in to a love for baking bread. First, she made bread for her family, but soon friends began to request her baked goods and it has bloomed into a home business. Working out of a kosher kitchen and using pareve equipment, Hofrichter bakes to order for customers and offers gluten-free, vegan, and allergy friendly options, including egg-free, dairy-free and soy-free . Hofrichter received her first request for a gluten-free king cake recently and is ready to create more for those who have special dietary needs or for those who just want a freshly made king cake. If you do get the plastic and are obligated to throw a king cake party, you could be a little different and serve the Mardi Gras donuts from Duck Donuts. Sure, your friends might grumble that you aren't keeping with tradition, as they scarf down the sprinkle covered treats, but the Carnival season only lasts so long. You gotta eat donuts while you can. The Mardi Gras donuts are available until mid-February.


Hurricane Harvey devastated the Cypresswood area in Champions, filling many of the restaurants and businesses with three to four feet of water. Rao's Bakery and Coffee Cafe was one of those severely affected and was closed for several months. It reopened in late November and the family-owned bakery is back to turning out delicious pastries and cakes, including their highly anticipated king cakes.

Voodoo king cake.
Photo courtesy of Rao's Bakery
Rao's traditional king cake is a pastry dough made with doughnut flour and has what co-owner, Josh Tortorice, calls a " cinnamon smear". However, it's the strawberry and raspberry cream cheese flavors that are the best sellers. That may change with the new peanut butter fudge and voodoo options. These flavors take king cakes to a whole new level. And, if you are unable to make the drive to visit the bakery, you can order a king cake on the website and have it shipped to your doorstep, whether you are in Maine or Montrose.

Rao's also makes petite Lafittes, a smaller version of the king cake that is perfect for two persons. It is available in cinnamon and strawberry.

Rao's Bakery has three other locations in Beaumont and Nederland.