Leeland House is ready to welcome y'all. Photo by Shannon Parker


Leeland House, 2119 Leeland, opened in January. The Southern-inspired eatery offers breakfast and lunch, with plans to extend to a happy hour and dinner service in the future. The newest concept from owner and restaurateur, Cheryl Crider, of Neighborhood Hospitality, will have a coffee bar with beverages like flat whites and chai latte. Shrimp and grits are on the menu, with a bit of a twist. The Leeland House version consists of smoked Gouda, roasted jalapenos and corn, cherry tomatoes, bacon, and portabella mushrooms. If your breakfast fancies lean to the sweet side, there are dishes like creme brulee French toast.

The old farmhouse looking structure has a front porch patio and there are plans to screen it in and add porch swings. With the possibility of some mild February days ahead, it will be perfect for sipping mimosas and waving to passersby.

Besides coffee and tea, the restaurant has a full bar. For lunch, there are sandwiches, soups, and salads. Try the Keep Calm and On, a sandwich of curry chicken salad,honey-roasted almonds and jalapeno cream sauce on a pretzel bun.

Well, kiss my shrimp and grits!
Photo by Shannon Parker
Bacon Bros., 2110 Town Square Plaza, closed the first week of January, according to Community Impact. The original restaurant started in Greenville, South Carolina and is still going strong. Travis Cook, a native Houstonian, brought the concept to Sugar Land after being a regular at the Greenville location, as reported here in the Houston Press. The pork-centric gastropub opened in March of 2017. No word yet as to why the restaurant closed. 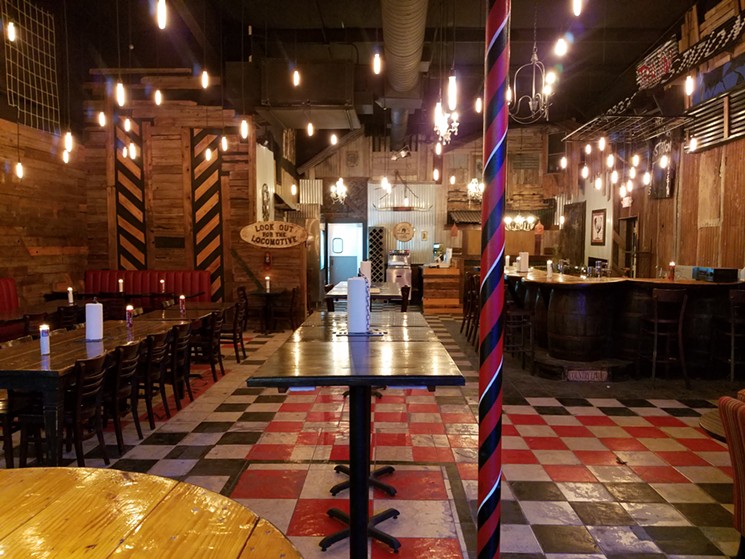 The owners completely transformed this strip center restaurant.
Photo courtesy of Ethel Mae Bourbon and Bacon
Another porcine pleasure palace, Ethel Mae Bourbon Bacon, 10750 Barker Cypress, has closed temporarily. Yours truly was planning a First Look at the restaurant which opened in December, only to discover that it had very recently closed its doors. We reached out to management but have not gotten any word on the situation. Having watched the transformation and hard work put into the restaurant's decor, we hope the best for its reopening. Meanwhile, you can show support for , Joe Duong, at his popular burger joint, The Shack, with three locations in the Cypress area.

Photo courtesy of Ripe Cuisine
Ripe Cuisine, Stephanie Hoban's vegan food truck, will soon be setting up shop at the Heights Waterworks development at West 19th and Nicholson. Hoban, who is the owner and chef, is a registered and licensed dietician as well as a trained chef, including stints in Madrid, Spain with El Chaflan, a Michelin-starred restaurant and the former Houston farm-to-table restaurant, Haven. Founded in 2014, Ripe Cuisine serves a fully plant-based menu with sourcing from local vendors such as Kraftsmen Bakery and Acres.

The new restaurant will have an organic design, incorporating green elements, natural light and a contemporary "eco-chic" aesthetic. There will also be a bar and outdoor patio.

Ripe Cuisine was named " Best Vegan Restaurant" in 2016 by the Press. The food truck will continue to operate in conjunction with the new brick and mortar and will also be available for catering and private parties.

Another Houston favorite, Common Bond Bakery, 1706 Westheimer, owned by Johnny Carrabba and George Joseph, will join Ripe Cuisine and Hopdoddy at the Heights Waterworks development with a second location of the popular bakery and restaurant., according to CultureMap Houston. There is no definitive date for opening, yet, so you will just have to wait in line at the Montrose location for the croissants and duck confit.


, 1936 Fountainview, is set to open in March, as reported by Paper City. The restaurant is a new venture from the family behind Romano's Pizza, 1528 West Gray. For 20 years, cousins Vincenzo Quarto and Francesco Fragale have been serving authentic New York pizza to Houstonians. From Calabria, Italy, they spent 15 years making pizza in NYC.

Their sons, Francesco Quarto and Frankie Fragale will be operating the new Italian restaurant and are bringing chef Francesco Fragale with them. The menu will focus on traditional Southern Italian food with fresh pasta and small, shareable pizzas. Francesco Quarto says, "Our spaghetti Carbonara is probably the best I've ever tried."

While Romano's only serves beer and wine, ( it is pizza after all), will offer a full bar and include some Italian cocktails, perfect for sipping and watching the chefs at work in the open and exposed kitchen.

The restaurant will be open seven days a week and a brunch service is in the works.

A little puppy with big shoes to fill, or chew.
Photo by Joey Bordelon Photography
Raising Cane, 163 West Road, will be opening in March, making it the 31st in Houston and the 127th in Texas. Founded in 1996 in Baton Rouge, Louisiana, the chicken fingers (fresh-never-frozen) chain was named for founder Todd Graves' yellow labrador, Raising Cane. Raising Cane II, a certified pet therapy dog, passed away in 2016. Graves and his wife, Gwen, have welcomed a new puppy, Raising Cane III, into their family and she's a cutie.

Coral Swords Game Cafe, 1318 Telephone, will officially open February 2, according to Houston Food Finder. Hunter Pence, formerly of the Houston Astros and the San Francisco Giants, has teamed up with wife Alexis, Ming Chen, Sanford Bledsoe III, and David Buehrer of Greenway Coffee Co. to bring a venue for gaming enthusiasts to enjoy coffee, beer, wine, and pizza while participating in various game nights. Friday nights will be "Magic, the Gathering". Thursdays will host Smash Bros. tournaments. For those into more classic fun, Monday nights will be Scrabble.

The venue will also be available for rent.

Saint's, 13455 Cutten, had its grand opening January 18 to January 21. Owners Terry and Connie Saint have brought in Don Savage from the tenth season of Hell's Kitchen as executive chef. The Champions area eatery serves locally-sourced ingredients and offers desserts and made by Richard Ferris, aka " Baker Boy".

Happy hour runs Monday through Friday, 4 p.m. to 6 p.m., with $5 drink specials and bar food. If you're lucky, there might just be some live music as well.


Chicken Station, 7001 Harrisburg, is expected to have its soft opening in three weeks, according to Eater Houston. Owner Roberto , formerly of Latin Bites, is back from Washington D.C., where he operated a Peruvian restaurant, Nazca Mochica. Now, he's bringing Peruvian-style rotisserie chicken, which will be cooked over charcoal, to the Bayou City. The menu is still in the works, but fried yucca and plantains will probably make the cut.

Pappa Charlie's BBQ shuttered its location in EaDo, 2012 Rusk, in December, as reported here in the Press. Owner and Pitmaster, Wesley Jurena, said it wasn't to be permanent and now he has found a new home at Cypress Trail Hideout, 25610 Hempstead, according to CultureMap. Construction is still underway and the new restaurant and bar expected to open late February or early March.The historic 1930's structure will have an expansive patio with a stage for live music and a play area for the tots. Children, not 'taters.

Pappa Charlie's will have its own signage at the new venue and will provide not only barbecue and smoked meats, but burgers, chicken fried steak, and sides as well.