A world of pho-lisciousness. Photo by Humphries Photography 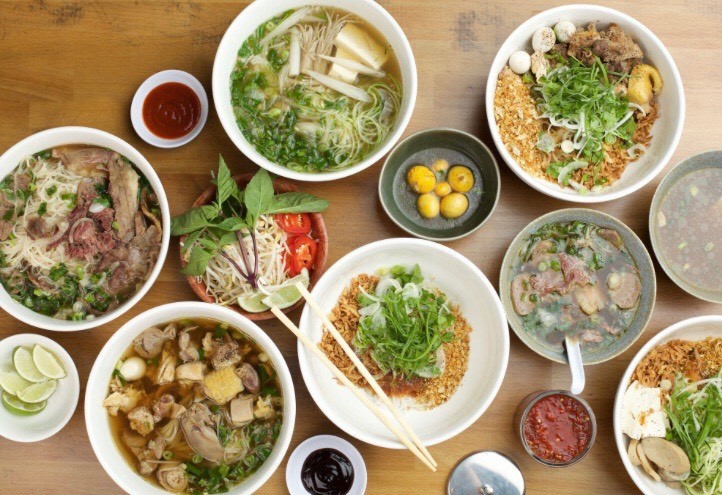 A world of pho-lisciousness.
Photo by Humphries Photography

Les , 1717 Montrose, began its soft opening this month, according to Eater Houston. The new pho restaurant takes the place of Cat Huynh and Angie Dang's former Vietnamese restaurant, Les Ba'get, which will reopen in a new space in the Oak Forest area this summer.

Pho- can dine on beef, free-range chicken, and vegan choices with the build-your-own-bowls with up to six toppings. The bowls are easy on the wallet at $10. There are appetizer choices like the sous vide egg with steamed tofu ($6) and Vietnamese-style grilled corn ($4).

Les  also offers the option of having the pho served dry, with the broth on the side to mix and sip at your pleasure.

The chicken dry pho has a special house sauce.
Photo by Humphries Photography
To increase your pho fun, there are cocktails on tap such as the Pho Collins, Saigon Night and Purple Rain.

During the soft opening, the restaurant is open Tuesday through Sunday, 11 a.m. to 8 p.m. It's closed on Mondays. You can be pretty in pink at Bloom and Bee.
Photo courtesy of Fertitta Entertainment

The Post Oak Hotel at Uptown Houston, 1600 West loop South, is booming with several new restaurants and bars to pamper its upscale clientele. CEO Tilman J. Fertitta, billionaire businessman Houston Rockets owner, says " The Post Oak will stand up to the world's best hotels. Guests will see the attention to detail we put into every touchpoint and the level of luxury they will not find anywhere else in Houston. It will certainly be a game changer."

The new restaurants follow the adjacent Mastro's Steakhouse which opened December 8 and Willie G's, 1640 West Loop South, which was reopened and relocated in January from its original location at 1605 Post Oak.

If you are fortunate enough and in possession of some serious moola, here are the newest places to sip and nosh like a billionaire at The Post Oak Hotel, whether it be for a special dinner or a "money's no object" weekend.

Craft F&B opened March 17 in the main lobby and offers pub fare, wood-fired pizzas gourmet hamburgers. If you're going classic, the #1 goes for $12, with a side of waffle fries coming in at $5. There is a Frito Pie made with bison chili and plenty of craft beers to accompany the salty and spicy treat.

The South of the Border burger at Craft F&B.
Photo courtesy of Fertitta Entertainment

For some sushi and light bites, there's H Bar. Expect some fine spirits and exotic cocktails. 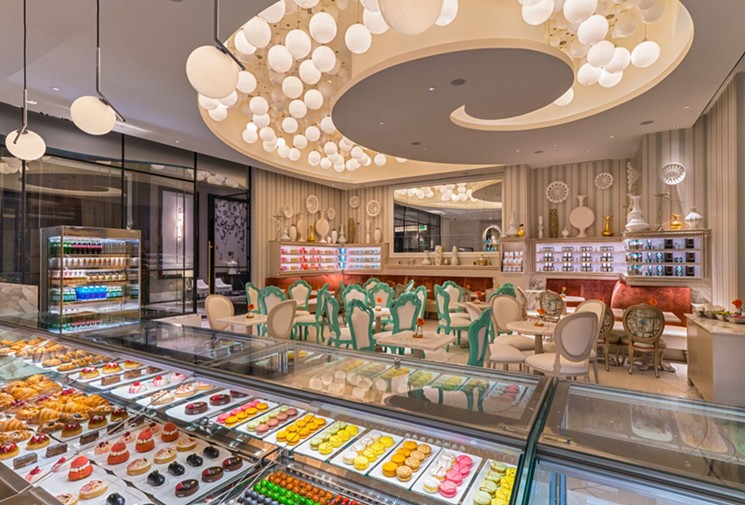 For wine connoisseurs, The Cellar at Post Oak has more than 2,000 labels, including rare vintages dating back to the 1800s. If you need help with the $3 million inventory, Master Sommelier Keith Goldstone and his team can steer you in the right direction. If your wine rack currently has an inventory of $26 like mine, you will probably need some expert advice.

The Bam-Bam salad has plenty of ingredients for hearty appetities.
Photo courtesy of Snappy Salads

Snappy Salads,1000 Main, is opening in the downtown tunnel system this week. Besides serving entree-size salads with substantial ingredients, the chain prides itself on its sustainability efforts, such as getting rid of plastic straws in favor of paper. It also recycles light bulbs and uses reclaimed wood in its decor.

Paper straws add to Snappy Salads sustainability efforts.
Photo courtesy of Snappy Salads
The restaurant offers salads and wraps with protein choices such as grass-fed beef tenderloin, all-natural chicken wild caught sockeye salmon. For vegetarians, there are choices like falafel, avocado nuts to add to the variety of salad vegetables.

Pappa Charlie's Barbecue and Cypress Trail Hideout, 25610 Hempstead, opened April 3, officially. Pappa Charlie's, which started out as a Montrose food truck, then morphed into a brick and mortar for a couple of years in East Downtown has now set up shop at Cypress Trail Hideout, a rustic, ice house style watering hole with an expansive outdoor patio, a stage for live music and even a play area for the little sidewinders.

The new venue gives United States Army veteran, Wesley Jurena, an opportunity to turn out his acclaimed barbecue to the folks in Cypress, but also allows more space for other menu items such as half-pound burgers, wings fried pickles. Smoked meats are available by the half-pound, plate or sandwich.

Good barbecue begs for beer and a look at the taps at Cypress Trail Hideout shows a variety of Houston breweries such as Saint Arnold's, Karbach, and Eighth Wonder, plus import brews like Celis Brewery from Belgium. The Butler House offers a good old-fashioned welcome.
Photo by Marina Silver
The Butler House, 23931 Gosling, has been open for a couple of months but celebrated its grand opening on April 7. The yellow old-timey building has a small herb garden out front and is located in Vintage Creek Centre, a multi-purpose shopping office space.

The restaurant boasts a large outdoor patio for dinner and drinks, with a large projection screen for planned movie nights. There are also live music evenings.

Menu items include salads, soups, steaks, and fresh fish. Happy hour is Monday through Friday, 3 p.m. to 7 p.m. and offers bar bites like sliders with beef from 44 Farms.

Bombshells dropped the big one in Pearland.
Photo courtesy of Bombshells Restaurant and Bar

Bombshells Restaurant and Bar, 13965 South Freeway, opened April 11 in Pearland. The new structure includes 10,900 square feet inside with an additional 2,880 square foot patio, seating up to 400 in total.The military-themed sports bar and restaurant is hangar-like in design and servers are "attractive Bombshell Girls with military-inspired uniforms". We cannot recall the last time we saw any of our brave men and women in attire remotely resembling such uniforms, but the breastaurant world is ripe for entrepreneurial pickings and RCI Hospitality Holdings, Inc. is planning to open four more Bombshells between now and early 2019, bringing the Houston total up to seven. There is also one in Dallas and one in Austin.

The entertainment restaurant is popular for its extensive food and menus featuring all the usual belt-busters and snacks that sports fans and beer drinkers like to have available while watching the Astros and Rockets perform like the champions that they are. And watching the Texans do their thing, too.

486 Crawfish and Seafood, 6155 N. Fry, opened the second week of March. With crawfish season in full force, this is the time to indulge. The small restaurant has paper-covered tables, awaiting the joyful mess of head-sucking and tail shucking.There are also blue crabs, snow crabs, king crabs and soft-shelled crabs available. Just pick your flavor( Cajun, garlic-butter or 486 Special) and your spice level, then settle in with a reasonably -priced bottle of beer and show those suckers who's boss.

There are fried seafood plates and kids meals, too. You can pretend to be an Italian noble while lingering over Hotel Granduca's sumptuous brunch buffet.
Photo courtesy of Hotel Granduca
Hotel Granduca, 1080 Uptown Park, is reintroducing its Sunday brunch buffet after a three-year hiatus. In 2015 the Italian villa-inspired hotel replaced the popular buffet with an a la carte menu, but the revamped brunch buffet has now returned. The $65 price tag includes a chef's carving station with offerings like sage and wild honey turkey, prime rib, and herb-crusted leg of lamb. There is also a seafood bar brimming with delicious fruits of the sea like oysters on the half shell, poached shrimp Alaskan King crab legs.

For those in a more breakfast mood, there are omelets and frittatas, plus artisan bread, Italian cheeses cured meats. To end the feast, there are plenty of freshly-baked cakes, tarts cookies for dessert. To add to the indulgence, there is also complimentary prosecco. Or for those feeling a bit Continental, try one of the new cocktails such as the Paloma Italiano, a refreshing blend of Mezcal, Campari, grapefruit, lime, simple syrup topped with prosecco.

For luxe-living kiddos, the brunch is $25 with choices like chicken tenders, grilled cheese and macaroni and cheese.