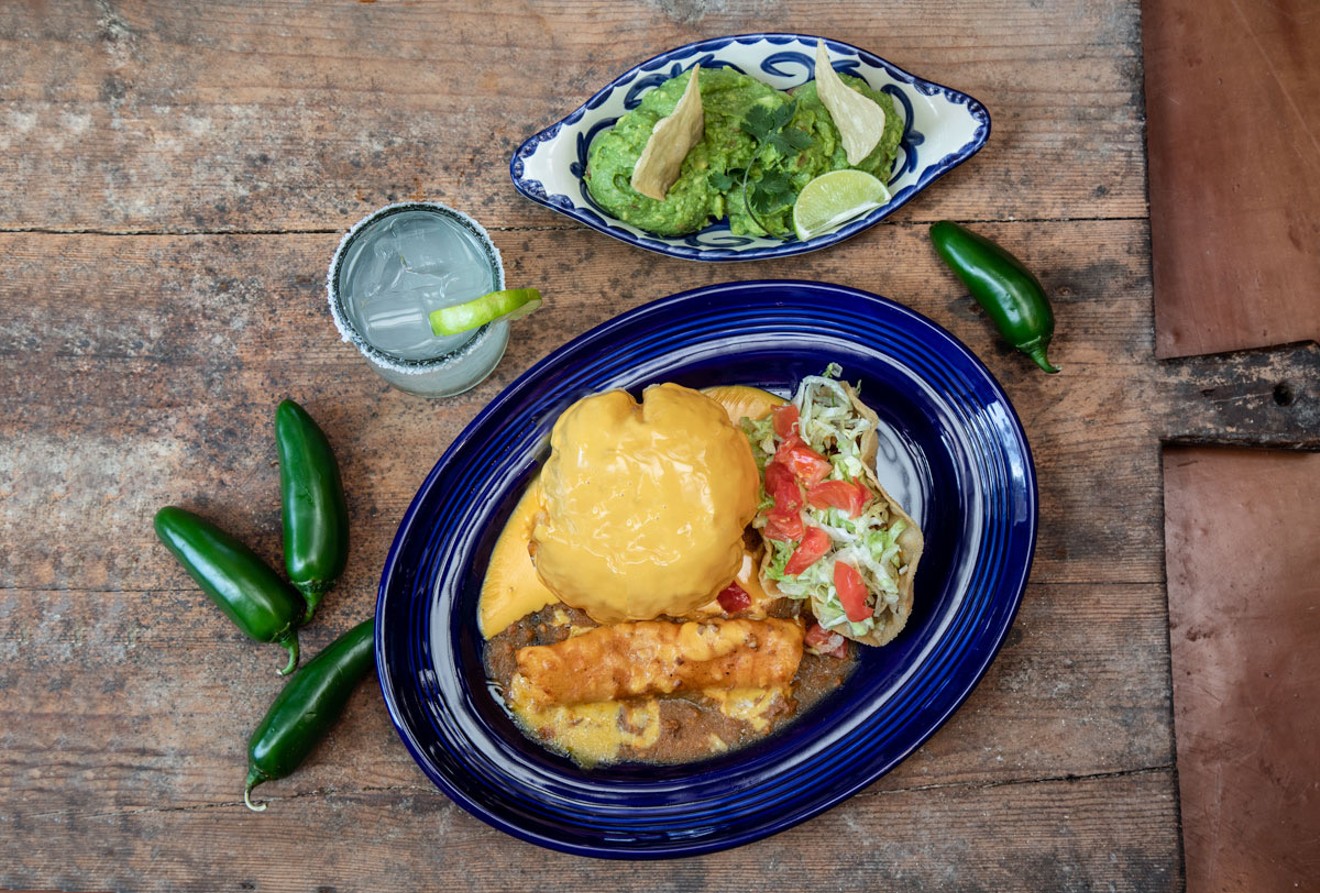 Los Tios Mexican Restaurant, 5161 San Felipe, opened August 26. The Tex-Mex restaurant from Adair Concepts has four other locations. The family-owned company also operates Adair Kitchen, Eloise Nichols Grill & Liquors, Bebidas, and Skeeter's Mesquite Grill. The new Los Tios will serve as the flagship location and is the largest with 6,500 square feet of space, anchoring one end of the shopping center which includes Adair Kitchen on the opposite end.

Los Tios will celebrate its 50th anniversary next month and many of the signature dishes still remain. Owner Gary Adair says, "Not much about the Los Tios menu has changed over the last 30 years because our devoted diners just won't have it." That means its popular combination dinners and puffy quesos are keeping loyal patrons happy. Los Tios offers a gorgeous patio for a pleasant escape.
Photo by Kerry Kirk
However, that doesn't mean Los Tios isn't keeping up with the times. Adair's children, Katie and Nick, are helping to expand the menu with more seafood and salads, plus a curated tequila program with more than 50 tequilas and mezcal. Last year, the brand introduced a weekend brunch menu with classic Mexican favorites and brunch cocktails to an enthusiastic response.

There's an expansive air-conditioned patio with large windows, a Mexican tiled fountain and plenty of live plants to transport guests to another place while sipping one of the new margaritas and enjoying fajitas, a combo plate or grilled Texas redfish on the half shell.

Rosie Cannonball, 1620 Westheimer, opened August 29, following on the heels of Goodnight Hospitality's  recent opening of Montrose Cheese and Wine. Both are located in the same newly constructed complex adjacent to its two-year-old upscale honky-tonk, Goodnight Charlie's. This is the second of three concepts to open by the group of partners; David Keck, Peter and Bailey McCarthy, Felipe Riccio, Adam Garcia and June Rodil. March, the group's 26-seat tasting restaurant, will open in early 2020 above Rosie Cannonball's.

The new European style restaurant will incorporate chef de cuisine Adam Garcia's experience staging in kitchens in Portugal, Italy and Spain with local ingredients, some grown on Goodnight Hospitality's own farm. The foundation of Rosie Cannonball will be the wood-burning grill and pizza oven. The different levels of heat will allow for a variety of pizzas and grilled vegetables plus room for hanging chickens and even roasting a pig. There are few things as beautiful as a wood-fired pizza.
Photo by Julie Soefer
Pizza choices will include Pepperoni, Lira Rosa Three Cheese, Speck and Chili Oil, Smoked Trout Roe and Fennel Sausage. There will also be Foccacia di Recco, a flatbread stuffed with mortadella and robiola cheese.

Executive pastry chef, Shawn Gawle, will be in charge of the breads and pastries at the new restaurant, making good use of the herbs that grow on the farm. Expect homemade gelato and a Basque cheesecake on the dessert menu. Master Sommeliers David Keck and June Rodil have created a wine list influenced by Spain, Italy and France while offering some progressive New World producers, too.

Shell Shack is taking it back and bringing a Katy location, too.
Photo by Lorretta Ruggiero

Shell Shack, 2412 Washington, has returned to the corporate umbrella of the Dallas-based company. The Houston franchise was bought back, but the restaurant's business will continue as normal. The concept is known for its "boils" of shrimp, crab and crawfish but also offers fried seafood plates, burgers, wings and more. There's a lively cocktail program that includes some colorful concoctions.

A new location of Shell Shack is slated for Katy, soon.

The Peli Peli Woodlands will be done in Cape Dutch architecture.
Artist's rendering by Tim Cisneros

Peli Peli, 1201 Lake Woodlands, is set to open September 3. The South African restaurant opened its first location in 2009 at Vintage Park, followed by The Galleria restaurant in 2014. It continues to get numerous awards and accolades for its cuisine and dining experience. The unique menu and colorful design elements reflect the vibrancy of the peli peli, a bird's eye pepper, which is also referred to as piri piri or peri peri in other cultures. The flavors are inspired by the different cultures that have contributed to the cuisine, including Dutch, Portuguese and Asian influences.

This makes the fourth location for the brand that also operates a more casual concept, Peli Peli Kitchen, in Katy. Co-founders Chef Paul Friedman and Thomas Nguyen, also a contributing food writer for the Houston Press, brought in Johannesburg-born chef, Ryan Stewart, as culinary director in 2018. Stewart will serve as executive chef at Peli Peli in The Woodlands, with Macey Maples as chef de cuisine and Patrick Wise as general manager.

We will have more on the opening next week, as we have been promised interior photos soon. Star Cinema Grill, 1495 Lake Plaza, will open September 20 at CityPlace. The locally-based dine-in theater will be designed by Gensler with amenities that include elevated cocktails and from-scratch food plus premium pods with blanket service and priority food and beverage service. The theater also plans to have a soft opening a few days before its main debut, so check out its website for more details closer to the date.

The new cinema will also feature a first for its brand: a boutique auditorium with reclining seating for 30 and a pre-function lounge with a conference/dining table. It will add 120 new full and part-time jobs to the area.

Star Cinema Grill will soon be joined by other businesses at the Springwoods Village complex, including Island Grill, Common Bond Bakery and 24 Hour Fitness. You can feel like an old school movie star at Star Cinema Grill.
Photo by George Paez
Star Cinema Grill, 702 Baybrook Mall, will begin renovations September 9. Though the theater is only four years old, the company wants to bring the ambience and amenities to the level of some of its more recently debuted theaters such as the one in Richmond, Texas. Star Commercial Construction will compete the renovations in two phases which will allow the theater to remain open during the upgrade. The renovations should be completed by mid-November. Movie-goers can expect old Hollywood glam and a hotel-style bar and lounge when it is completed.

The theater will also have live-streaming capabilities for sporting events with a venue for meetings, conferences and celebrations. 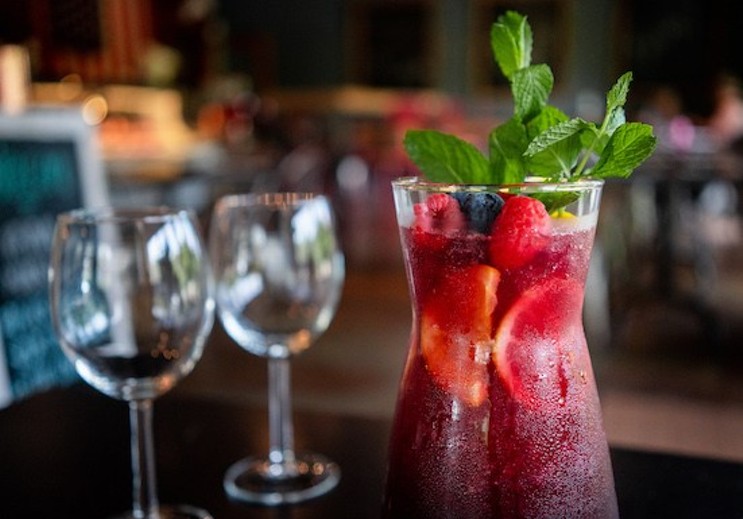 Revival Market, 550 Heights Boulevard, is now selling beer and wine now that the 1912 law that made the Heights area a dry zone has been repealed. Morgan Weber and Ryan Pera opened the cafe/market/butcher shop in 2011. General manager Layne Cruz began the TABC process months ago and, now, the market can offer some Texas beers and ciders on the menu. Though the market does not sell hard liquor, there will be ABV cocktails or "sessionables" made with fortified wines like Lillet Rosé. Cruz brought in another Agricole Hospitality personality, Leonora Varvoutis, to help with the wine selection. As general manager and sommelier at Coltivare, Varvoutis is an expert at curating a brilliant wine list. Revival Market's will be a pared down list with 20 bottles on offer, nine by the glass. The bottles will all be under $60 for enjoying at the cafe, with a retail discount given for take away purchases. There is also a house red and white for $8 a glass/ $28 a carafe.

Revival Market is hosting its Revival Repeal Celebration from 2 p.m. to 4 p.m., August 30 with complimentary tastings of its wines by the glass. Feges BBQ, 3 Greenway Plaza, is bringing in some new faces. The acclaimed barbecue spot in the Greenway Plaza food court was opened in March 2018 by pitmaster Patrick Feges and wife and business partner (and queen of the sides) Erin Smith. The duo have chosen Matthew Oberhausen to take on the role of general manager. Oberhausen has more than 14 years of experience in the food industry and will be helping to execute the couple's vision for the barbecue business, which might include a second standalone location in the future. That will make our Carlos Brandon happy, as you can read in his review of Feges BBQ here in the Houston Press.

Daniel Capetillo is the new sous chef and a graduate of the Conrad N. Hilton College, with years of experience in the culinary world. He loves the macaroni salad on the sides menu, as does his one-year-old son, Dorian. He also enjoys making the banana cream pie at Feges BBQ, so you have him to thank for the yumminess. 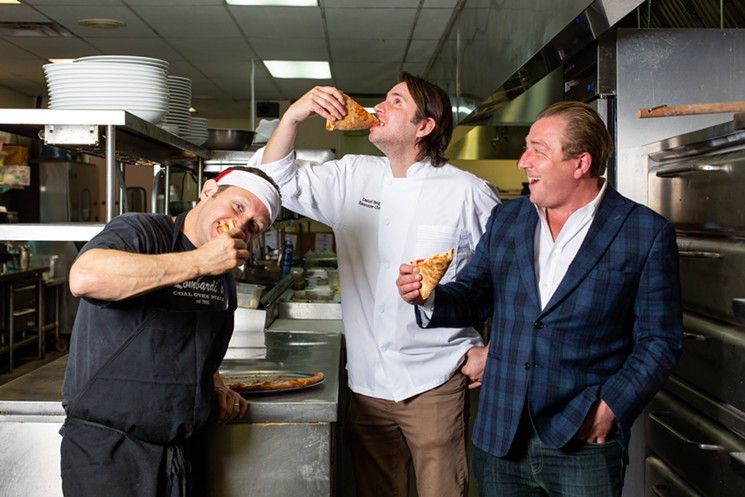 Berg Hospitality is offering free meals to on-duty first responders at Benjamin Berg's three Houston restaurant concepts from September 1 to September 6. The three-course meals are available for lunch and dinner. Guests accompanying the first responders (hopefully not in custody "guests") can order the same three course special for $25. Those who are undercover may need to show credentials.

Benjamin Berg founded "First Responders Appreciation Week" in 2017 after Tropical Storm Harvey. Berg says, "Our goal is to thank and honor all of the first responders for their ongoing service and dedication to helping the City of Houston."

Sammy's Sports Grill has signed a long tem lease for a 5,050 square foot space at Cross Creek Town Center in Fulshear. The development is expected to be completed in spring 2020. The sports bar offers burgers, sandwiches, steak and seafood entrees.

Banh Mi Guys, 9228 Cypress Creek Parkway, closed in July
Oporto Cafe, 3833 Richmond, closed July 27
KEEP THE HOUSTON PRESS FREE... Since we started the Houston Press, it has been defined as the free, independent voice of Houston, and we'd like to keep it that way. With local media under siege, it's more important than ever for us to rally support behind funding our local journalism. You can help by participating in our "I Support" program, allowing us to keep offering readers access to our incisive coverage of local news, food and culture with no paywalls.
Make a one-time donation today for as little as $1.