Return to Marais and Normalcy

My family and I have rarely gone out to restaurants since the pandemic began. My husband and I have braved a favorite Mexican restaurant for margaritas a couple of times and the tasting menu at Brennan's for our anniversary. Still, we hadn't gone out to dinner with friends for the past eight months, though we've had a couple of limited get togethers in our backyard. Now, as coronavirus cases continue to trend upward and experts warn of a "dark winter" Americans are once again evaluating the risk to pleasure factor.

As a freelance food writer in a city whose restaurant scene is considered one of the most diverse and plentiful, I have plenty of material about struggling restaurants and local businesses due to the pandemic. As shutdown restrictions relaxed, people began to venture forth for patio dining and dinners at plexi-glassed booths. For some restaurants, it has been successful but for others, the occupancy restrictions do not allow for enough profit to bring back employees or keep the doors open. While some have easily transitioned to take-away, fine dining restaurants find that particular form of service just another obstacle. And, to be frank, many of us would like to return to our favorite eateries but economic concerns have hit everyone, not just the hospitality industry.

However, Houstonians have become more complacent about the virus as the months have dragged on, ready to leave their homes, no matter how much DIY has been done or how pretty the backyard looks from the daily gardening.

The Seafood Gumbo comes filled with crab, crawfish and okra.
Photo by Lorretta Ruggiero
When another couple we are close to proposed getting together for their anniversary, I figured it was time we got out for the evening with friends. Many people I know have returned to a scaled-back version of their pre-pandemic lifestyles. Though my husband and I both work from home and my daughter does her college work online, my teenage son has returned to school on campus as have our friends' children.  I get two emails a week informing me that there has been yet another positive case at school. So, there's always a risk versus reward element to any trip outside the home nowadays.

Our friends suggested we go to Marais in Dickinson, near their home. We made plans to celebrate not only their anniversary but the husbands' October birthdays.

The last time we were at Marais with these friends, it was after our two families spent the day sifting through their Hurricane Harvey flooded home for items that could be salvaged and packed so that repairs could begin on their water-ravaged house. We sat outside on the terrace by the bayou, the same one that had turned Dickinson into a debris-filled town that looked more like a war-torn country.  Though we were sweaty and their family's faces still bore the weariness of their lives being upended, we enjoyed some delicious food that day and some dark-humored laughter. 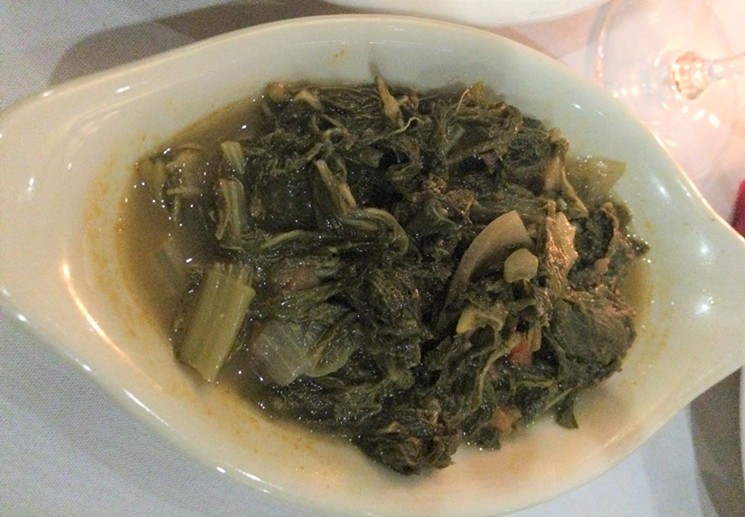 The greens were tasty but different.
Photo by Lorretta Ruggiero

This time was different but still in a time of crisis. My husband and I made the trek from Cypress and met up with our friends. We headed to Marais, a New Orleans-inspired restaurant located in a beautiful brick chateau-style building nestled between the bayou and Dickinson Bar-be-cue and Steakhouse, which is also owned by Keith and Holly Lilley, the owners of Marais.

We walked through the back terrace, hoping to have drinks at the Plank Bar which has a nice patio facing the water. Unfortunately, the Plank Bar was only open on the weekends. We were at Marais on a Tuesday. Instead, we sat upstairs in another bar area, Benson's, at a high-top table next to the windows overlooking Benson's Gully. 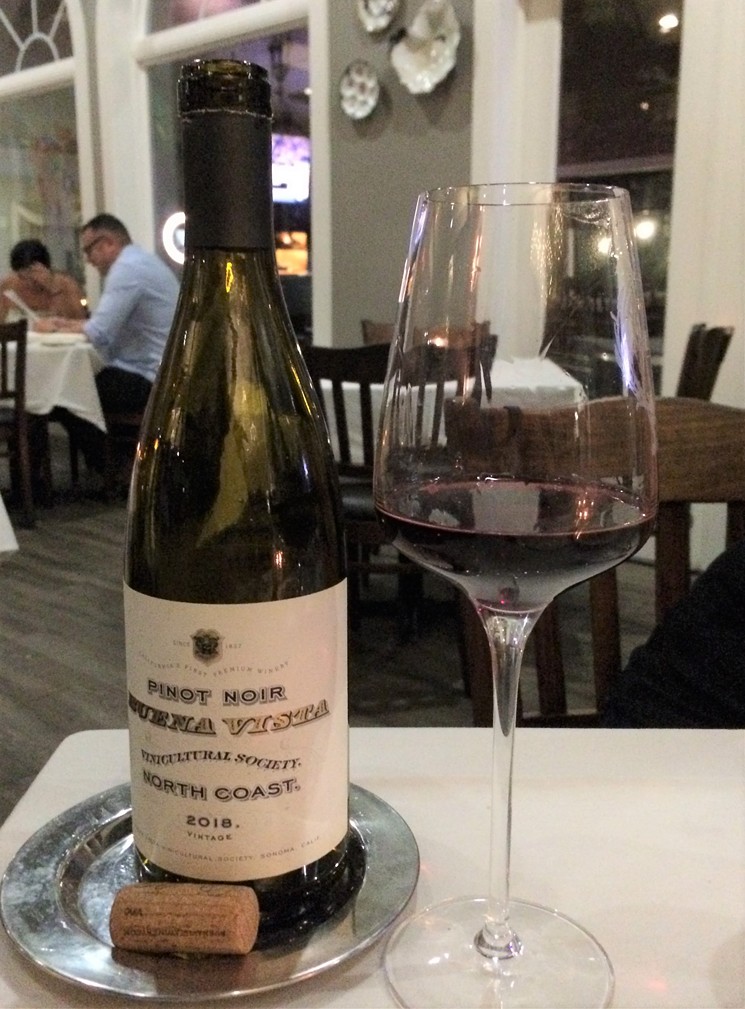 Buena Vista's Pinot Noir is a smooth operator.
Photo by Lorretta Ruggiero
I personally was a little concerned about the small space. There was only a handful of people in the bar but it still seemed like close quarters. Our server was a friendly young woman, not especially knowledgeable about the happy hour specials or the beer list. My friend ordered a gin martini and was asked if she wanted regular or blue cheese-stuffed olives. Knowing her love of funky cheese, I predicted my friend's reply. Her husband had to query the server a bit about the beer choices. She told us, "I've been here a year so I guess I should know this." With graciousness, we smiled and said not a word. My husband and I ordered a couple of the happy hour margaritas on the rocks for $5 each. They were a little sweet but they had a nice bit of tequila so we were good.

Our service was a little uneven but our server became more engaging over time. I did wish she wouldn't pull her mask away from her face as she talked to us. It was still in front of her mouth so that was somewhat helpful. For myself, I cannot imagine having to wear a mask all day as many employees have to do now. I almost pass out after an extra-long trip to the grocery store. I have empathy for those who have to endure them for long stretches at a time.

There are steaks as well as seafood at Marais.
Photo by Lorretta Ruggiero

We noshed on an appetizer of deviled eggs in the bar. There were six (don't get me started on the odd number served at most restaurants) which meant each couple could share three, each with a different topping. One had candied bacon and another smoked trout and caviar. My favorite was the egg with a perfectly fried shrimp on top. The shrimp was sweet and gave me an idea of what I might want to have for an entree later.

We soon made our way into the restaurant for our 7 p.m. reservation and were sat at a table near the open kitchen with chandeliers gently lighting the brick walls and gas lanterns flickering overhead. Our friends were somewhat regulars, usually choosing Marais as their go-to special occasion restaurant or happy hour getaway. They wanted us to try a certain Pinot Noir but unfortunately, the restaurant did not have it in stock that day. Instead, the server offered a comparable bottle, Buena Vista North Coast Pinot Noir 2018. It was smooth and light, easily drinkable with everyone's various meals.

Crab beignets and remoulade sauce are a Cajun treat.
Photo by Lorretta Ruggiero
Our friends suggested we try the Blue Crab Beignets to start and they were full of sweet blue crab. The remoulade sauce was just as good, perfect for sopping up with the bread that was served. Our dining room server was on the ball, perfectly pacing our wine, appetizer and entrees. This allowed we four longtime friends to relax and enjoy an evening of conversation and laughter. In fact, it had been so long since we had done this, it almost felt like the high school prom dinner where you felt grown up for the first time. Our feral selves were back to high heels and button-downed shirts. 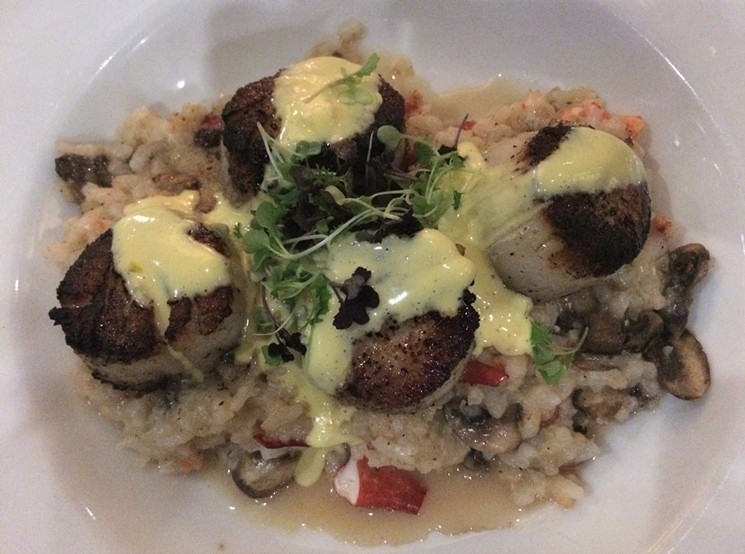 Chunks of lobster and wild mushrooms lies underneath seared scallops.
Photo by Alex Ryan
My husband ordered the bowl of Seafood Gumbo which had a deep dark roux, not too thick and the right amount of spice. It was garnished with a crab claw and a jumbo shrimp and a decent deal at $12. My friend ordered one of her favorites, seared scallops over a lobster and mushroom risotto. I tried a half scallop and it was perfectly cooked, which was pretty amazing considering the one-sided char. I let her enjoy her risotto dreamily to herself. Her husband got a filet mignon medium rare and said it was just right. They had raved about the Cajun Braised Mustard Greens so I had a bite (safely, with a new fork). They were delicious but the strong taste of cumin gave them more of a Spanish flavor than Cajun. While my friends enjoyed them anyway, they were a tad disappointed that the flavor profile was different than usual.

Marais excels with the seafood.
Photo by Lorretta Ruggiero
My dish was Blackened Redfish over dirty rice with a creamy seafood sauce. There are few things that I love more than fresh fish topped with seafood. Snapper Pontchartrain is my thing. Crab-stuffed Flounder? Come to Momma. This sauce had a nice amount of crabmeat plus the bonus of two sweet jumbo shrimp. If there was something that stood out to me at Marais that evening, it was the shrimp. Perhaps it's the restaurant's proximity to local Gulf seafood. I have sometimes been disappointed with mushy, tasteless specimens elsewhere. These were the best I had enjoyed in a while. 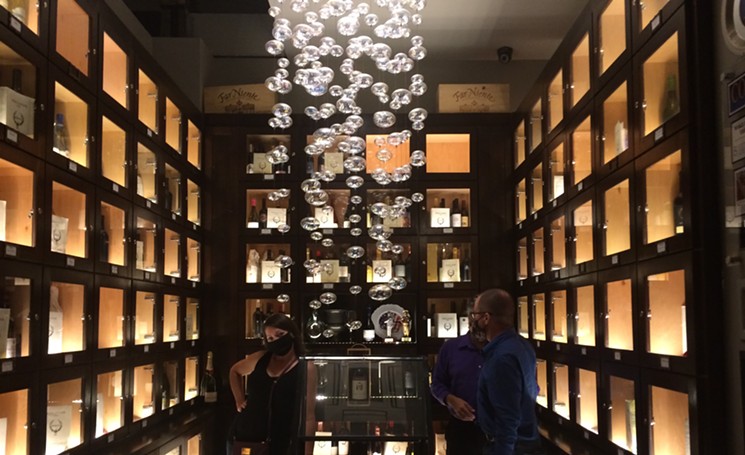 The fish itself was just a bit overcooked but the dirty rice had a nice subtle heat. The creamy sauce was just the right balance for the Cajun spice.

We ended our evening with some complimentary prosecco proffered by the manager, who also sprinkled our table with silk rose petals. We were happy to be social creatures once more. Even for a few precious hours.

Marais
2015 FM 517 E.
Dickinson, Texas 77539
281-534-1986
KEEP THE HOUSTON PRESS FREE... Since we started the Houston Press, it has been defined as the free, independent voice of Houston, and we'd like to keep it that way. With local media under siege, it's more important than ever for us to rally support behind funding our local journalism. You can help by participating in our "I Support" program, allowing us to keep offering readers access to our incisive coverage of local news, food and culture with no paywalls.
Make a one-time donation today for as little as $1.